Charles Street Bridge, near the site of Worrall's works. Made by E. T. Bellhouse and Co in 1867 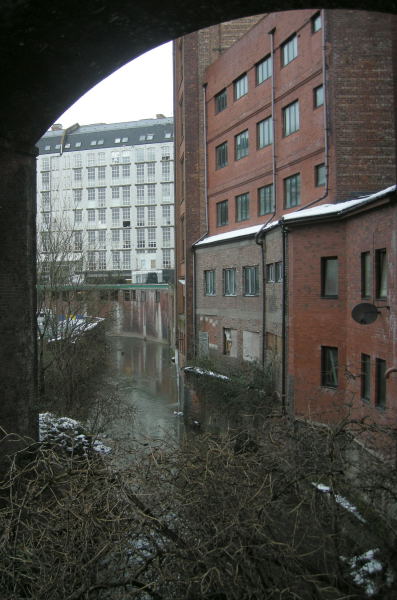 View under railway viaduct from from Charles St Bridge, looking downstream. Worrall's works was on the right of the River Medlock, Mynshull Mills, Chorlton-on-Medlock on the left. A little way further downstream was the entrance to the Duke’s Tunnel. 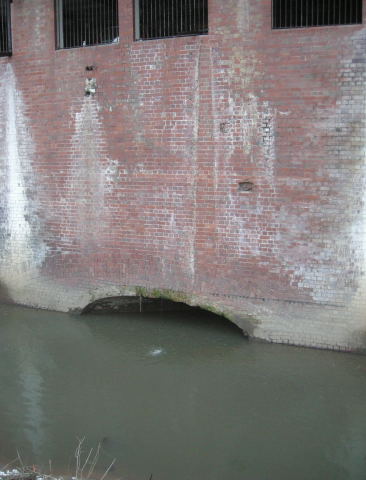 Entrance to the Duke's Tunnel.

1789 Mention of the dyehouse of Messrs. Tomlinson and Worrall, Ancoats Lane.[2]

1792 Moved to its permanent home in Ordsall, Salford, where it operated until its closure in 1964.

1837 James Worrell and John Mayo Worrall were the business's third generation, and they adopted the name J. & J. M. Worrall when their father stepped down, a very wealthy man, in 1837, by when the company was already 69 years old. They soon began a programme of take-overs and acquired several companies in Lancashire & Yorkshire. The Old Garratt was one of them.

Worrall's was always synonymous with the huge Ordsall Dyeworks in Salford, where employment numbers reached 3,000. The Old Garratt was one of several small subsidiaries and detached units which the company operated, typically under their original names. The Moranding Co was another.

1890 J. and J. M. Worrall first became a private limited company it remained so until 1899, when it combined with similar firms to form the English Velvet and Cord Dyers Association, which shortened its name to English Velvets in October 1948.

The Manchester Works and its Environs

Considering the changes in the area, in reverse chronological order:

c.1899 Goad's Insurance Plans for Manchester, Map 52 (updated c.1899) shows Worrall's Central Manchester premises, bounded on the east by Princess Street and on the west by the curving River Medlock. The southernmost building of the works was annexed by the railway viaduct connecting London Road and Oxford Road stations, although access was available via the arch passing over the river. Goad’s Plan indicates the variety of activities undertaken in the works, which included bleaching, singeing, drying, brushing, scouring and finishing. The plan shows four horizontal boilers and one vertical boiler, the latter serving the mechanics’ shop. Three factory chimneys are shown.

Adshead's 1851 map shows a collection of buildings, of various shapes, identified as Douglas & Co's Old Garratt Dye Works, on a triangle of land with the Medlock on the west and Brook Street (later Princess Street) on the east.

The 1849 60" O.S. map[5] shows that the site was then occupied mainly by the Old Garratt Dye Works, and evidently some of the buildings were incorporated in Worrall's works. The 1849 map identifies many of the individual features - dye houses, chimneys, cisterns, dye tubs, shumach pan, engine house, 5 boilers, logwood mill, and drying house. The small southern annexe of Worrall's works, a building with three storeys plus basement, and labelled as 'Stock & Lumber' on the 1899 plan, was marked Garratt Mill (Cotton) on the 1849 map. Adshead 1851 Manchester map describes it as 'Law & Robinson's Cotton Mill'. The 1936 edition of Goad's Plan marks the building as a Printer's premises, now having having only two storeys plus basement. However, a factory chimney is shown in the same position, so it may the the same building, but reduced in height. This building, complete with truncated chimney, has survived as the 'Joshua Brooks' nightclub. A 1960 photograph shows that the building was at that time occupied by Smith & Dunn (lithographic colour printers) and J. F. Tangye and Co [6]

Immediately across the narrow river another building shown on the 1849 map has survived - the 'Lass O'Gowrie' pub. The two are linked by the Charles Street Bridge, built (or perhaps rebuilt) by E. T. Bellhouse and Co

One feature which did not survive the period between 1849 and 1899 was a footpath and iron footbridge joining Pritchard Street and Brook Street (later Princess Street). This passed the Old Garratt Bridge Inn, which was evidently demolished to accommodate expansion of Mynshull Mills, Chorlton-on-Medlock.

Going back further in time, Bancks and Co's Plan of Manchester, 1831 shows a number of buildings on the site, identified as Garrat Works. The opposite side of Princess Street (then called Garratt Street or Brook Street) was still undeveloped, and the 14thC half-timbered Garrat (or Garratt) Hall was intact. The area west of Brook Street had been developed, but Charles Street bridge had not yet been built. 1910 photo of derelict Garratt Hall here.

William Green’s map of Manchester Salford, started in 1787 and completed in 1794, shows a very different landscape, with the area of interest being very much in the countryside. There were industrial buildings on the site of Worrall’s works, identified as 'Printing Works'. The path shown in the 1849 O.S. map and a footbridge existed at that time, the path running from Oxford Street, following field boundaries. The map also shows Shooter's Brook having just passed Garrat Hall, passing under Brook Street and then quickly disappearing into TWO diverging tunnels before joining the River Medlock.

A surviving piece of industrial history here is the 'Duke's Tunnel', started by the Duke of Bridgewater in 1787. Its working life was curtailed by silting of the river, the effect of which can be seen in the photograph. The entrance was at the crown of the river bend, immediately west of the dye works. [7]. It appears that the tunnel joined the Medlock a short distance north of Shooter's Brook.