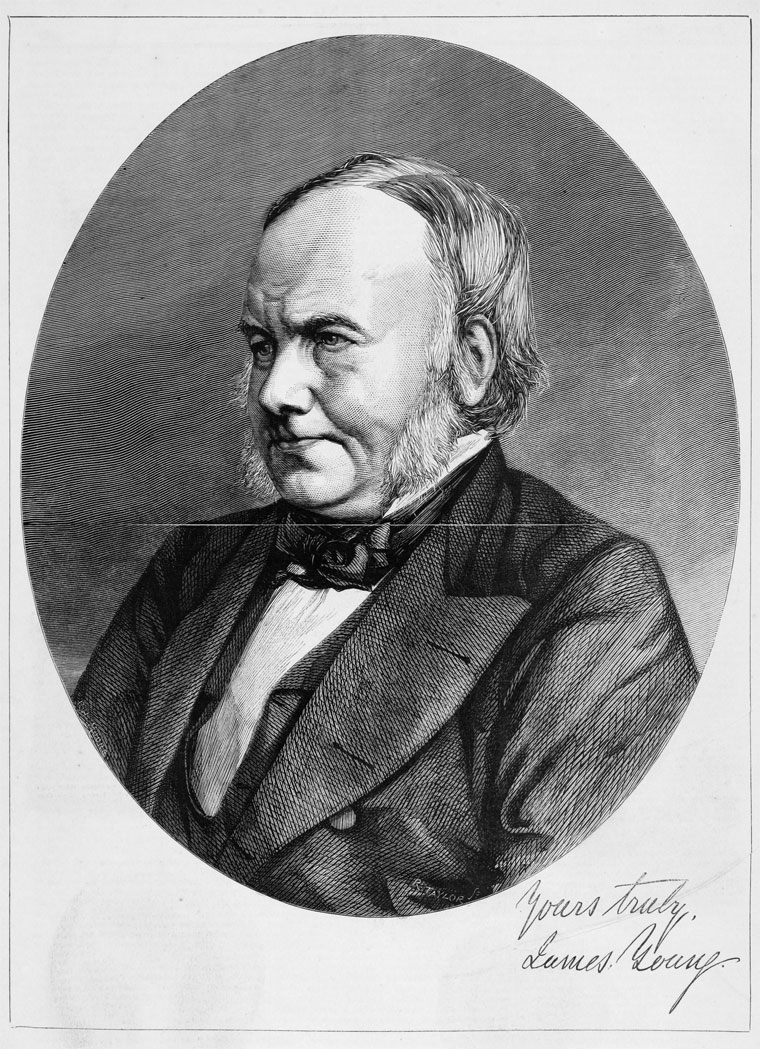 James ‘Paraffin’ Young, (1811–1883), chemist and philanthropist, pioneer of the oil-shale industry in Scotland

1811 Born on 13 July at Drygate, Glasgow, the eldest son of John Young, a self-employed carpenter, and his wife, Jean Wilson

Young worked for his father

1830 He began to attend the evening lectures in chemistry of Professor Thomas Graham, at Anderson's University. By the session of 1831–2 he had become Graham's laboratory assistant.

He became the acquaintance of many sons of industrialists

1834 He began giving lectures for Graham to the mechanics' class.

1838 Young married his cousin, Mary Young. Seeking employment, his friend Sheridan Muspratt (also at University College) facilitated an offer to Young of a salary of £140 per year and a house.

1839 Young became manager of James Muspratt and Sons at Newton-le-Willows, Lancashire. Young was involved in the layout of the plant and became its technical director; his first patent for the production of ammonia (11 November 1841) was an industrial application of his earlier work at university.

1844 Young joined Tennant, Clow and Co as manager of their Ardwick Bridge chemical works in Manchester. Young made improvements to methods of production at a number of their plants. In 1844 he produced a cheaper indigo dye.

1847 Lyon Playfair wrote to Young telling him of a petroleum spring yielding 300 gallons/day in the Riddings colliery near Alfreton, Derbyshire. Young suggested to Tennants that the firm might refine this petroleum but they decided that the likely scale of operations was too small. The landowner, James Oakes, then suggested that with his help Young should establish his own refinery, an arrangement to which Tennants agreed. The main customers were textile firms who bought lubricants.

Young mistakenly thought that the Riddings petroleum had been condensed from the coal and deposited in the strata above so began to experiment with the dry distillation of coal. He gained a patent for this process in 1850.

1848 He patented a method of producing sodium and potassium stannate from tinstone.

1848 Mr Young, manager of the Ardwick Bridge works, was reported to have found a treatment for diseased potatoes which involved use of sulphuric acid[2].

1851 The best source material for oil was torbanite, found in the coal measures near Bathgate; Young and his partners, E. W. Binney, a Manchester lawyer, and Edward Meldrum, opened an oilworks in 1851 as Young, Meldrum and Binney. The first products were naphtha and various lubricants.

At the Great Exhibition, as well as Tennant's own exhibit, their manager Mr Young was recorded as also being a separate exhibitor; he showed his apparatus for making stannate of soda for calico printing, oils for lubricating machines from a mine in Derbyshire and a sample of paraffin made by slow combustion of coal[3].

By 1855 paraffin for lamps had become more profitable; paraffin wax was sold from 1856 and in quantity for candles from 1859.

Young was involved in many legal actions to protect his rights

1864 Young broke with his partners and established a new works at Addiewell. His British patents expired this year which encouraged competitors to set up in business. At its peak the Scottish shale-oil industry supplied 90 percent of the world's shale oil.

By 1870 ninety-seven competing oil firms had been established. American petroleum firms also used Young's process. Young had retired from business and gradually reduced his shareholding in his limited company.