Grace's Guide is the leading source of historical information on industry and manufacturing in Britain. This web publication contains 140,562 pages of information and 227,382 images on early companies, their products and the people who designed and built them. 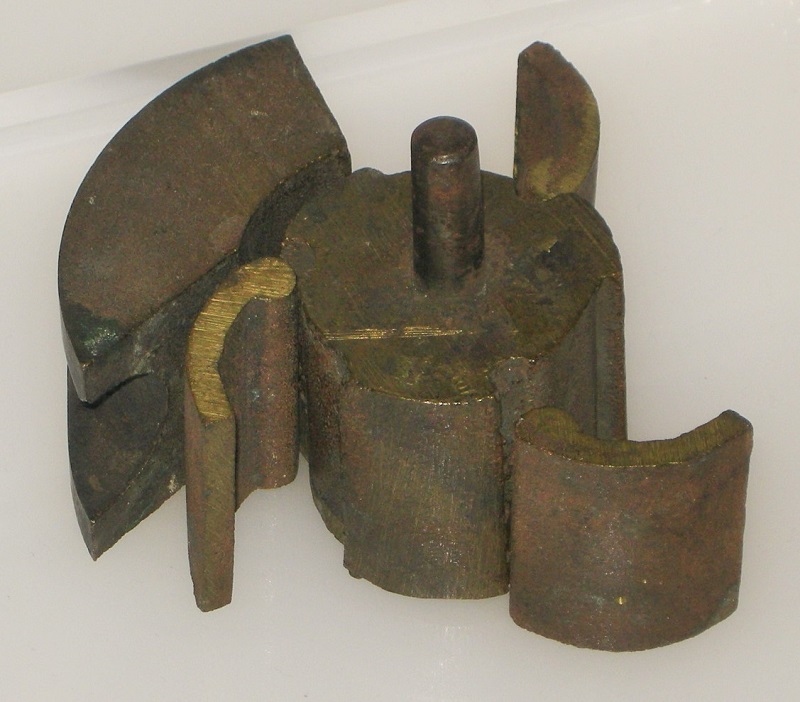 Note: This is a sub-section of James Watt

Several of Watt's proposals were thought worthy of further investigation. Fortunately, some components of a small prototype are displayed at the London Science Museum. The intended method of working is clearly shown in an animation by Bill Todd on Douglas Self's invaluable website[1]. The hinges and their recesses would have been difficult to machine satisfactorily, and even if this difficulty could have been overcome at the time, the engine would no doubt be susceptible to damage and wear at all the contact surfaces if operated at high speed.

The photo shows the components displayed at the Science Museum. The bore of the casing would have been about 6". The description accompanying the exhibit gives a date of 1782, and states that 'a steam jet spun the three blades around a shaft'. In fact it seems more likely that the engine was intended to work by positive displacement rather than by impulse.

The components appear to be unmachined castings, rather than being the remains of a working model. It may be that Watt was unconvinced of the practicality of the engine, but decided to have the castings made, perhaps when work was slack in the brass foundry.

An alternative design had a single pivoted vane located in the casing, and a single rotating radial vane fixed to the rotor. An external valve operating mechanism would have been needed to open the vane.

James Watt had a number of ideas for 'steam wheels', and these greatly appealed to Matthew Boulton, who clearly saw the commercial potential of steam-powered rotary motion.

One of Watt's proposals, dating from 1769, involved altering the balance of a 'steam wheel' by using steam pressure to displace a column of liquid having low volatility, such as mercury, 'Newton's metal', or oil, within the hollow rim of a wheel.

Surprisingly, this was thought worthy of developing on a large scale, using mercury. Work was started by Matthew Boulton and Dr William Small, and time and money were wasted on it until about 1782 when the idea was abandoned.[2]. No doubt there were problems with the valves, with the stability of the mercury column, and leakage. Leakage of mercury and its vapour would have been another threat in the large catalogue of extreme industrial hazards.

R. L. Hills provides an interesting account of the progress of development and construction of the 6 ft diameter steam wheel at Birmingham, while Watt was working in Scotland. It was almost complete by February 1774, but neither Boulton or Small could afford the time to supervise further work. Watt arrived in Birmingham in May 1774, and about two months later Watt reported that it had worked by steam, and he believed that 'it will answer'. Costings were produced for a 24 ft diameter steam wheel, which included £20 worth of mercury. Of the 6 ft diameter prototype, witnesses reported that on admitting steam, it overcame the efforts of two men to hold it back.[3]