Model of Steam Carriage 'Elephant' at the IMechE. 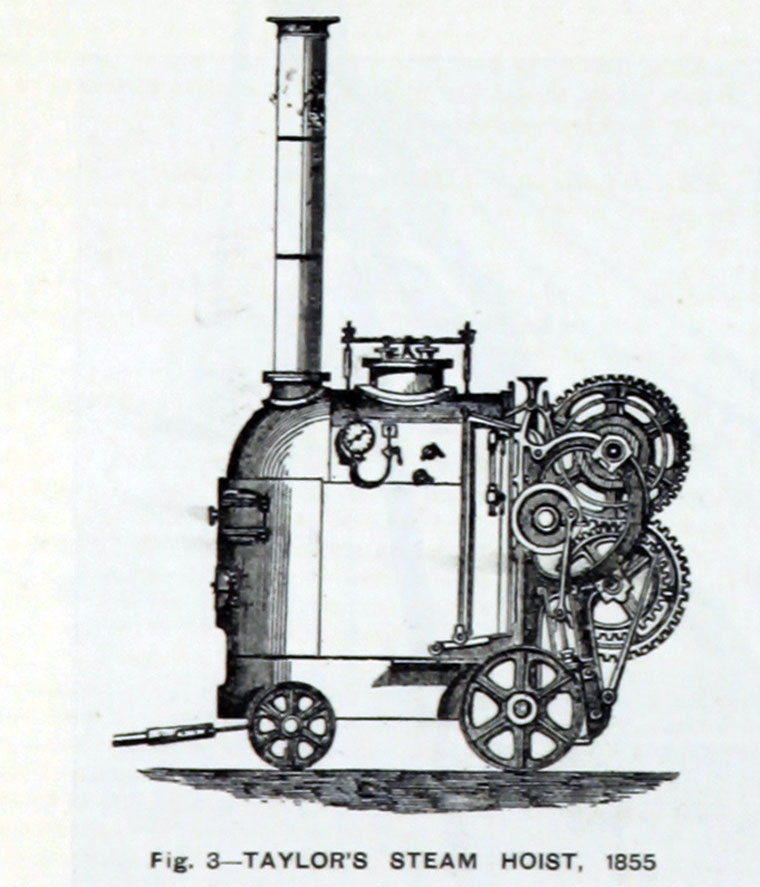 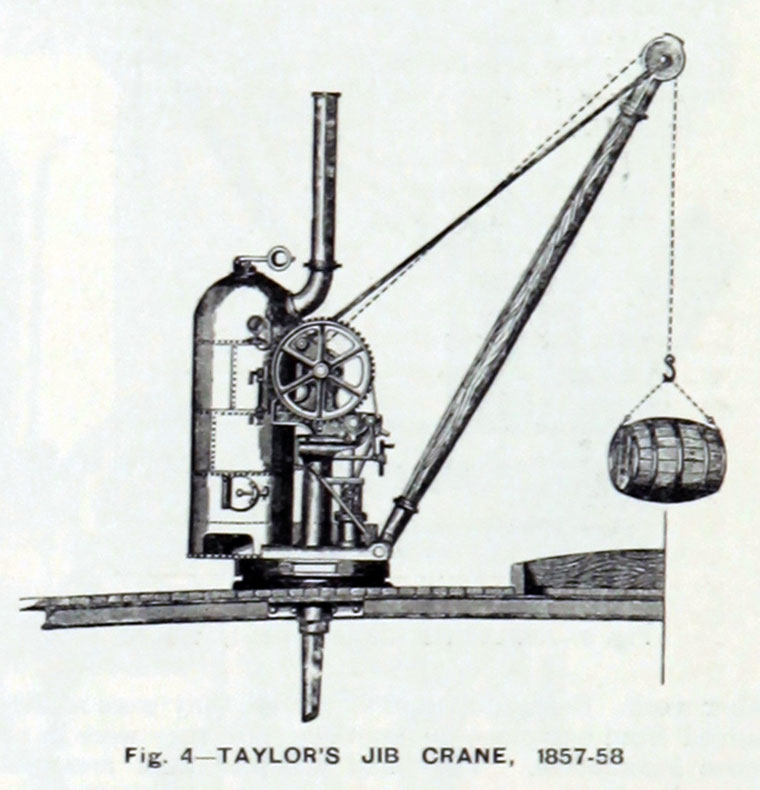 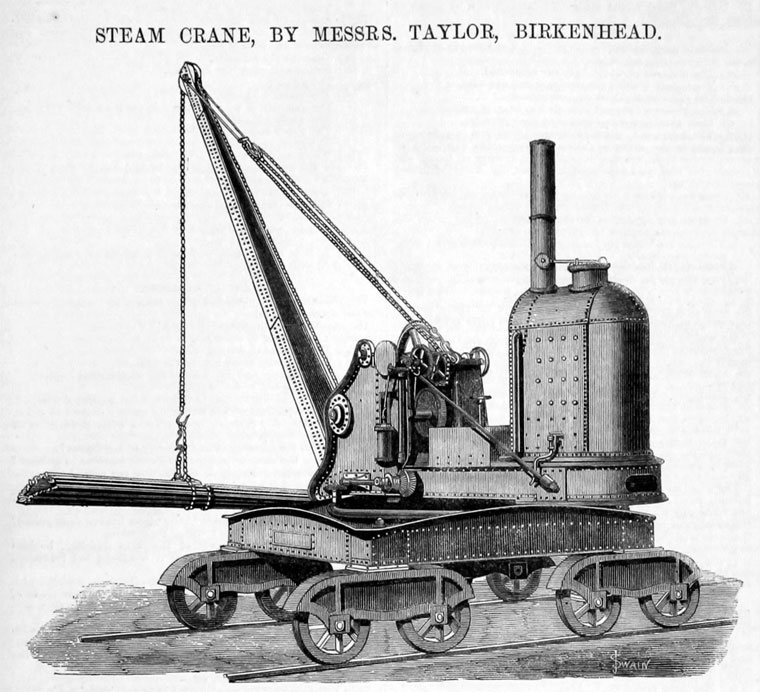 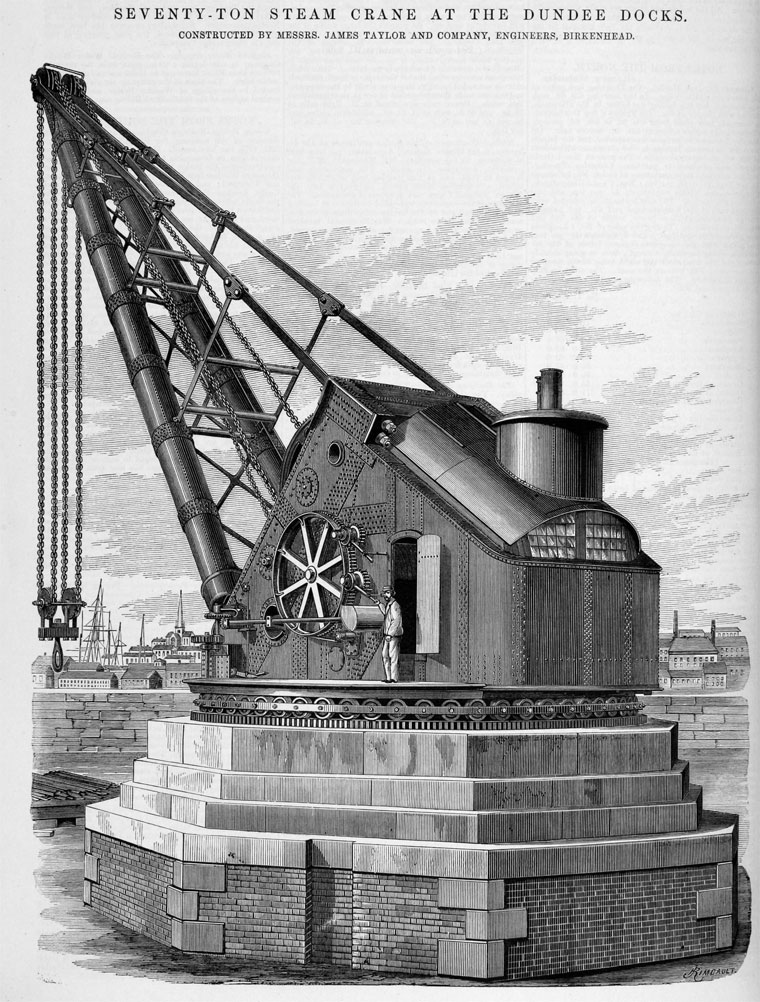 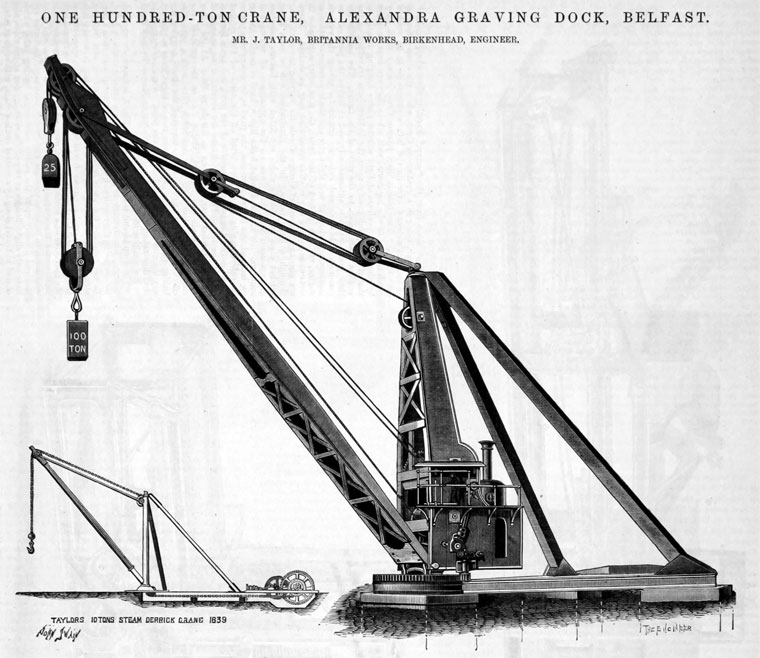 1852 Patent. '871. To James Taylor, Engineer of Messrs. James Taylor and Co. Britannia Works, Birkenhead, in the county of Chester, for the invention of certain improvements in and applicable to floating graving docks for repairing and building ships.'[2]

1850s Made traction engines, including their own 'Steam Elephant' design and engines to Bray's design.[3]

1853 Filed Patent No. 3004, 'Certain Improvements for Raising and Lowering Weights'.

1857 Trials. 'Several successful trials have been made this week, at Birkenhead, of a portable hoisting apparatus constructed and patented by Messrs. James Taylor and Co., of the Britannia Ironworks, Birkenhead. The apparatus mainly consists in the application of Taylor's patent double cylinder to the working of two barrels, which are made to revolve either separately or together, as the case may be; the management being so simplified that they are brought under the control of one man. The whole of this apparatus is bolted down upon a truck mounted on six low tram wheels, with sheer legs erected in front, provided in the usual way. Its capabilities are various.......it has been supplied by Messrs. James Taylor and Co. through the eminent civil engineer Edward Woods, Esq., of London, who, with several gentlemen and practical engineers was present during the trial......'[6]

1860 'One of Taylor's patent traction engines, called steam elephants, built at the Britannia Works, Birkenhead, for the Dutch Government, for use in the docks of Flushing, when tested, it is said, drew a load of 14 tons 13 cwt, going up and down hill, turning corners, &c, with ease.— The Builder.'[8]

1861 Dissolution of Partnership. '...the Partnership heretofore existing between us the undersigned, James Taylor and Matthew Henry Lewis, in the business of Iron and Brass Founders, carried on at No. 89, Cathcart-street, and at No. 346, Cleveland-street, Birkenhead, in the county of Chester, under the name, style, and firm of Taylor and Lewis, is this day dissolved. All debts due or owing by the said late firm will be received and paid by the said James Taylor, by whom the business will in future be carried on...'[11]

1861 Erection of cranes. 'Messrs. Taylor and Co., the Britannia Ironworks, Birkenhead, have commenced the erection of pair of their new description of steam travelling cranes, with the elevating jibs, on each side the second dock at Chatham Dockyard, in which the Achilles, iron steamer, will be built. The tramway and supports for the cranes extend the entire length of the dock — a distance of 330 feet, the works being of the most substantial character. The tram ways rest on double rows of supports of great strength, the cranes being required for lifting the immense beams and slabs of iron used in the construction of the new steamer.'[12]

1866 Supplied engines for SS Jerome, built by Hunt and Sinnott [14]

1869 James Taylor of the Britannia Engine Works summoned for a breach of the Factory Act.[16]

1869 Advertisement (spelling uncorrected): 'NOTICE.—Messrs. THOMAS HODGE, GEO. HODGE, JAMES DUNLOP, and WM. HISLOP, lately in Employ as Four of our Foremen, are not Authorised, on and after this date, to Transact any Business on our behalf. JAMES TAYLOR and CO., Engineers, Brittania Works, Birkenhead.' [17] See Hodge, Hislop, Dunlop and Co

1870 'Large Steam Crane.—A very powerful steam crane, manufactured principally cf wrought iron, was satisfactorily tested on Saturday the New Dock, Leith. A weight of 50 tons was lifted, lowered, swung round, and deposited the quay again with the greatest ease. The largest steamers the Hamburg and American or any other line can now have boilers or engines of the greatest weight put into them at Leith. The crane was manufactured and erected by the firm James Taylor and Co., Britannia Works, Birkenhead, and although tested for only 50 tons, it can lift 90.'[18]

1876 'The Titan Machine. — On Saturday last, a huge machine, called the Titan, of somewhat novel construction, was tested at the Britannia Works, Birkenhead, where it has been constructed by Messrs James Taylor and Co. This new machine has been made from the designs of Sir John Coode, C.E., for the purpose of laying concrete blocks of 32 tons each, to form a breakwater in the harbour of Colombo, Ceylon, the foundation stone of which was recently laid by the Prince of Wales. The length of the machine is 76 feet, and the block carriage will lay the blocks to an overhang of 36 feet, the back end of the girders being ballasted to upwards of 40 tons. The lifting machine is placed over the ballast tank. The machine is so arranged that the locomotives, with the trucks carrying the immense blocks, come under the machine itself, lifting the blocks, and carrying them forward and transversely by means of the block carriage, so as to form a roadway for the machine as far as the breakwater may be extended. The capabilities of this monster machine were tested to the entire satisfaction of the engineer to the crown agents for Ceylon, and other gentlemen of the engineering skill' [19]