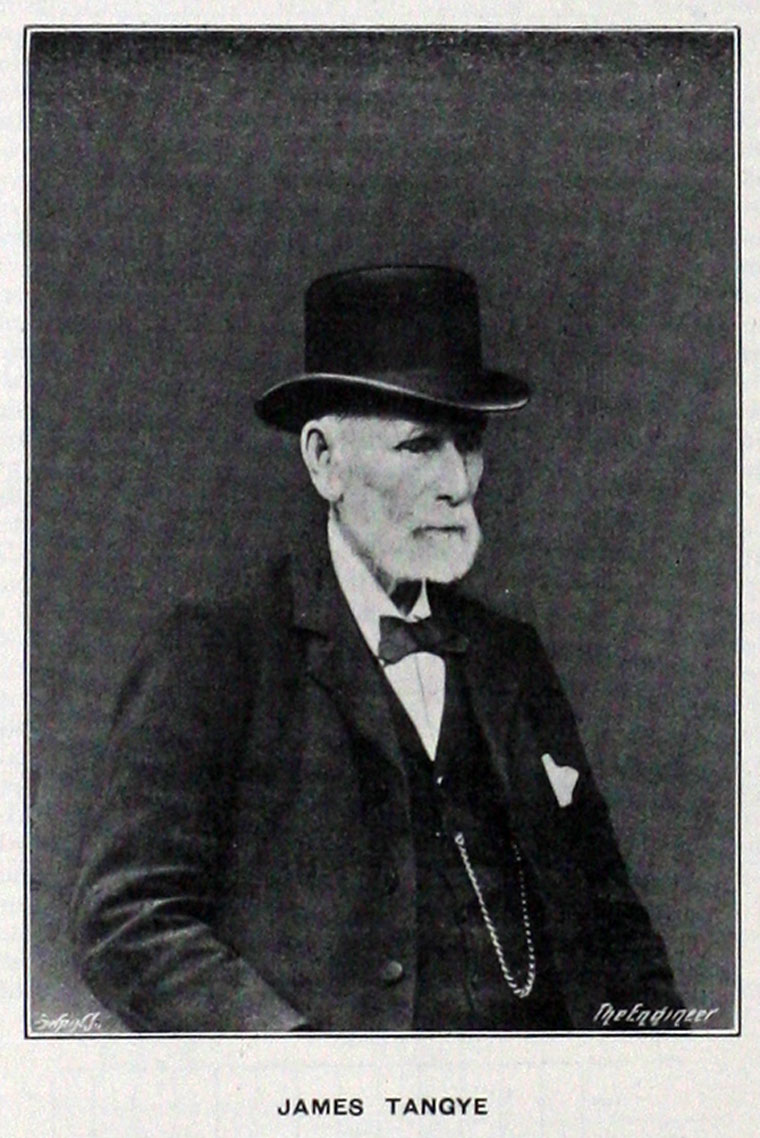 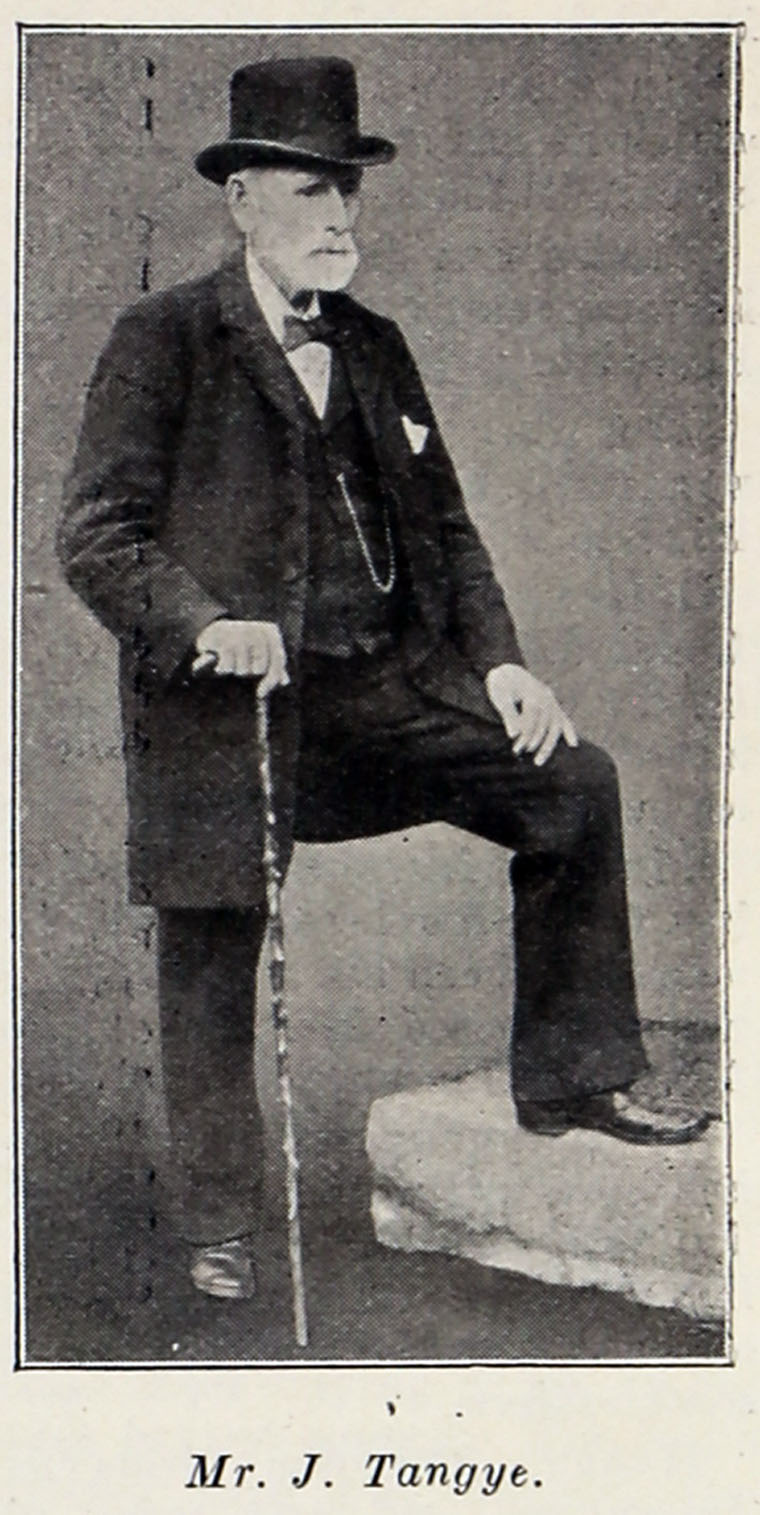 According to his brother, Richard's, autobiography, while still a youth James obtained a post at an engine factory in Devonport, the manager of which was Mr. Smiles (a brother of the author, Samuel Smiles - presumably this was William Smiles who was married in Stoke Damerel (i.e. Devonport) in 1848) - presumably the firm was Distin and Chafe.

Worked at W. Brunton and Co, designing and making machines to make safety-fuses

1855 After his father died, he moved to Birmingham, where he worked at Thomas Worsdell's railway works.

1858 January James Tangye went into business with his brother Joseph, in what ultimately developed into Tangye's Cornwall Works, at Birmingham.

1872 Retired from the businesses

JAMES TANGYE was born at the village of Illogan, near Redruth, Cornwall, on 6th October 1825, being the eldest son of a noted family of engineers.

He formed his first acquaintance with the steam-engine when accompanying his maternal grandfather to his work, and it was not long before he had his own little workshop where, in his spare moments, he used to make working models of steam-engines, lathes, etc.

After leaving school in 1837, he went to the Copperhouse Foundry, Hayle, where work was then in progress in connection with Brunel's suspension bridge, used first for spanning the Thames at Hungerford (Charing Cross), and now erected at Clifton over the River Avon. During that time he gained much information and found suggestions for future work in his observations of Brunel testing the strength of plates by a hydraulic press.

On leaving Copperhouse, he went for a short time to a neighbouring wheelwright at Pool, where his wages were 4d. a day, although he could match in speed and quality of work any of the skilled wheelwrights whose wages were 18s. a week. His ambition was aroused, and he soon left.

Before seeking another situation, he spent a little time in making wheels and ploughs needed upon his father's farm, and he devised methods of "dressing" tin in the mines. About this time he constructed and put to work a water-wheel, 18 feet in diameter by 20 inches "breast," for driving a stamping mill.

Later he was employed at Pool by Mr. William Brunton, Sen., one of Mr. Brunel's assistants, to make hydraulic pumps, and then for a year he was at the Redruth Foundry, during which time a locomotive was built by the firm for the West Cornwall Railway.

In 1848 he went to Devonport, and was engaged at Messrs. Distin and Chafe's Works on repair jobs at the dockyard.

Later he was asked to become manager of the works, but he preferred to join his brother, Mr. Joseph Tangye, who was then employed by Mr. William Brunton, Jun., in scheming machinery for the manufacture of blasting fuse. They both remained with Brunton for some time, and made the whole of the machinery used in the process, ultimately having a small interest in the business.

In 1855 he accepted the post of works manager at Thomas Worsdell's railway works at Birmingham, where some of his brothers were occupied; but in January 1858 he associated himself with his brother Joseph, and later with his brothers Richard and George, in what ultimately developed into the well-known Tangye's Cornwall Works, at Birmingham. Another brother, Edward, came from America to join them, and the style of the firm was James Tangye and Brothers, Machinists. This afterwards became Tangye Brothers, and then Tangyes Limited.

The manufacture of the Weston block gave the firm a good start, of which thousands have been made. The well-known Tangye steam-pump, originally an American idea, was another important factor of success, and his application of the hydraulic system to lifting-jacks gave the business a further impetus, especially as these jacks proved of great service in connection with the launch of the "Great Eastern."

Acting on the suggestion of his brother, George, be set to work and designed an engine, of which each unit was to be simple as possible, so that the type could be standardized with a view to its manufacture in large numbers for stock. The success of the engine and of the high-speed governor was so pronounced as to necessitate an extensive addition to the works.

In 1872 he decided to retire, as did also Joseph and Edward, so that Richard and George were left to continue the business. He did not, however, cease to take an interest in mechanical engineering, and at his retreat—Aviary Cottage, near the place of his birth — he had a workshop built, with machine-tools driven by one of his own small steam-engines. Much of his leisure time was spent in his well-appointed observatory. In 1862 he read a Paper before this Institution on "Hydraulic Shears and Punch" (Proceedings, page 341).

His death took place at Hogan, near Redruth, on 4th April 1913, in his eighty-eighth year.

He became a Member of this Institution in 1861.