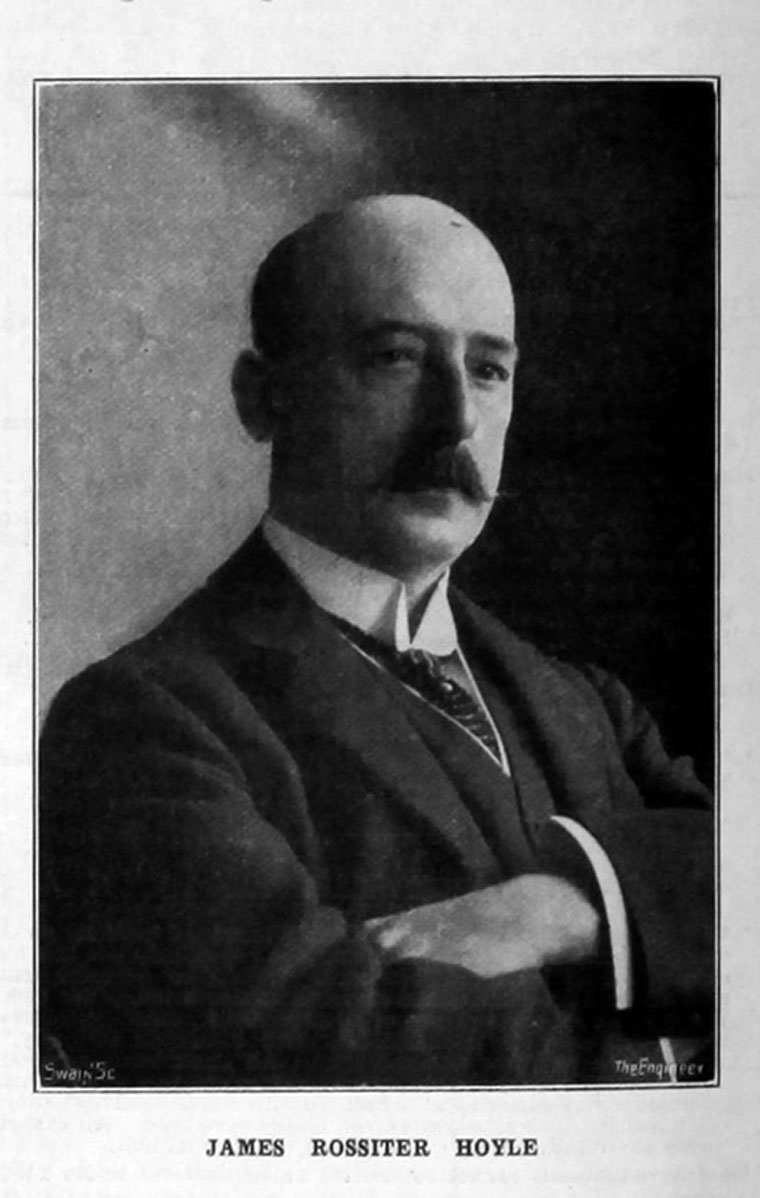 "Widespread regret will be felt at the death of Mr James Rossiter Hoyle, a former Master Cutler at Sheffield, which occurred on Sunday last in a London nursing home.

James Rossiter Hoyle was born in Manchester in the year 1856. He was the son of the late Mr. Williams Jennings Hoyle, a member of an old Yorkshire family, who held positions of importance in the firm of Sir W. G. Armstrong and Co and was for sometime, chief assistant to Sir Andrew Noble. The younger Hoyle, after receiving his early education privately, studied for some time at Owens College, Manchester, and then was sent abroad to acquire a knowledge of the French language, at which he eventually became very proficient; a fact which was to have a very considerable influence on his career. On returning to this country, he entered the service of his brother-in-law, Mr C. W. Burton, who was the agent for several steel firms, and himself a manufacturer doing business with the Continent. In connection with this business Mr.Hoyle again went abroad, this time to Paris, where he obtained a large amount of valuable practical experience, as well as acquiring a useful acquaintanceship with the business side of his profession. Incidentally, also, he perfected his mastery of French. One of the branches of engineering to which he had given a considerablo amount of study was that of gun and projectile making.

It happened that about that time - 1881 - Thomas Firth and Sons, of Sheffield, had entered into an important contract with the French Government for the supply of gun forgings, etc. This contract having arisen out of the fact that the French Government had imposed new and difficult tests connected with the manufacture of gun steel, which tests the French makers refused to accept, but which Messrs. Firth's found themselves able to guarantee. It happened, too, that the late Mr. Charles Henry Firth had met Mr. Hoyle in business, and, recognising how valuable a young engineer with an extensive knowledge of French and of French business methods, such as Hoyle had, would be to his firm in connection with its French contract - especially as the young man knew something of guns and gunnery - offered him employment. Hoyle accepted and went to Sheffield to begin a connection with the Firth firm which was to last for forty-five years.

Although quite a young man at the time - he was only twenty-five or so - quickly he began to make his influence felt. He was soon given the post of manager of the gun works, to which under his superintendence, considerable extensions were made, some of them designed to increase the firm's capacity for making big guns. In France he had witnessed experiments with a novel type of armour-piercing shell, which was considered to be a decided advance on any previously existing projectile of the same type. After experiencing some considerable trouble, he persuaded Messrs. Firths to acquire manufacturing rights, and to take up the manufacture of this shell. He was deputed to visit France and obtain the particulars necessary for the setting up of a factory for making it in this country, and when he returned he at once busied himself with erection and putting to work of the building.

Another departure for which Mr. Hoyle was responsible was the equipment of an extensive engineering factory at Riga, which his firm carried out several years before the war. The establishment of this factory, at which steel goods, such as files, tools, &c., were produced, was considered by him to be of vital importance because of heavy duties imposed on imported goods by Russia was threatening to put a stop to the valuable trade which the firm was doing with that country.

During his association with Messrs. Firths, Mr. Hoyle identified himself with its interssts to the exclusion of everything else. For it he visited all parts of the world, seizing every opportunity of expanding its business and doing everything he could to maintain its prostects. It is said that his business journeying took him twice round the world and into practically every country in Europe. As long ago as 1893 he was made a director of the firm and, later, first, co-managing director with Mr. Lewis J. Firth, and then, when the latter went to America, to see to the management of the Firth Sterling Steel Company, of Pittsburg, sole managing director. That position he continued to hold until the end of the year 1921, when he retired, though he still continued to take an active interest in the affairs of the firm, nor, so we understand, had he entirely severed his connection with it when he died.

A great event in his life was that he was Master Cutler in 1912, and his year of office was a success in every way. He had previously been popular in Sheffield, but his conduct while holding office gained him still further popularity. Throughout his connection with the firm his relations with members of the staff and the workpeople were of the most cordial character, and on two occasions - first in 1907 when he had completed a quarter of a century in the firm's service and again in the year of his Master Cutlership - he was made the recipient of tokens of regard.

Mr. Hoyle was created a Justice of the Peace in 1912 and regularly took his place on the bench. In the midst of a very busy professional life, he still found time to play a prominent part in many local affairs, and was ever ready to give his assistance to benevolent and philanthropic movements. He was elected a member of the Institution of Civil Engineers in 1897, and of the Institution of Mechanical Engineers in 1887, later becoming a member of Council and Vice-president of that body. He was also a member of the Iron and Steel Institute, and was for two years President of the Sheffield Society of Engineers and Metallurgists. At the meetings of the last mentioned body he was a frequent attendant and speaker, and throughout his career he was always deeply interested in the scientific side of the steel industry."

He was born in Manchester, where his father held an important appointment in the firm of Messrs. Armstrong, Whitworth. He received his early education at Owens College, and subsequently entered the firm of Messrs. Bury & Co., a Sheffield steel-making firm, under the management of his brother-in-law.

Later he was engaged as engineer in Paris, and through business interests came into touch with the firm of Thomas Firth & Son, who had secured a contract with the French Government.

Mr. Hoyle went to Sheffield about the year 1881, and was for some time manager of Firth's Gun Works.

In 1885 he built the company's steel plant in Sheffield.

In 1893 he became a director of Thomas Firth & Sons, and when his co-director, Mr. Lewis J. Firth, went to America to organise the Firth Sterling Steel Co. in Pittsburgh, Mr. Hoyle assumed the entire directorship of the Sheffield works. He became managing director of the firm, from which position he retired at the end of 1921.

In 1912 he was Master Cutler of Sheffield.

He was elected a member of the Iron and Steel Institute in 1884.

JAMES ROSSITER HOYLE was born in Manchester in 1856.

He was the son of the late Mr. William Jennings Hoyle, who was elected a Member of this Institution so far back as 1866 and who held positions of importance in the firm of Sir W. G. Armstrong and Co., Ltd.

The subject of this memoir, after receiving his early education privately, studied for some time at Owens College, Manchester, and then was sent abroad to obtain a knowledge of the French language.

In 1878 he became a partner in the firm of A. Burton et Fils, of Paris, who were sole agents is France for Messrs. Burys and Co., Ltd., of Sheffield, manufacturers of rock drills, air-compressors, and stone-crushing machinery.

On returning to England in 1881 Mr. Hoyle entered the works of Messrs. Thomas Firth and Sons, of Sheffield, and before he reached the age of thirty he was appointed manager of the department devoted to the production of forgings for guns and heavy machinery.

During his long association with Messrs. Firth - covering a period of forty-five years - Mr. Hoyle identified himself with its interests, travelled twice round the world on its behalf, and was able, with his knowledge of French affairs, greatly to forward the Finn's business in that country.

Amongst the departures for which Mr. Hoyle was responsible was the requisition of the manufacturing rights in this country of an armour-piercing shell of French design and the erection of a factory in this country for its production.

Re-establishment of a large factory in Riga for the production of tools and steel goods of various kinds was also largely due to his initiative and advice.

In 1893 he was appointed a director of the firm, and later on he became co-managing director with Mr. Lewis J. Firth, and when the latter went to the United States to see to the management of the Firth Sterling Steel Co., of Pittsburg, he was appointed sole managing director. That position he continued to hold until the end of the year 1921, when he retired from active participation in the firm's business affairs.

A great event in Mr. Hoyle's life was his year of office as Master Cutler in 1913, in which important civic position he achieved much success and popularity. He was deeply interested in all matters connected with steel, and was a Member of the Iron and Steel Institute, and of the Sheffield Society of Engineers and Metallurgists, of which latter he was for two years President.