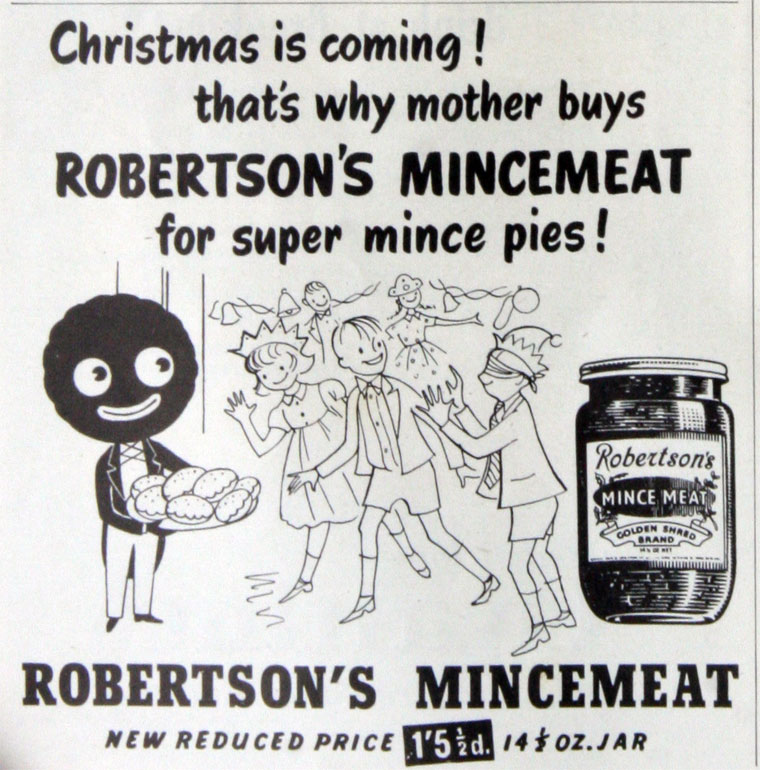 1859 After three years as an apprentice in a grocer's shop, James Robertson, set up his own grocery business.

1864 The company was founded. Marmalade was originally produced in the back of the shop but soon a factory was set up to meet increased demand, and jam and mincemeat were added to the range.

1890 The company moved to Droylsden, Manchester.

c. 1910 Robertson's, the company trade name, began to use the Golly as the company's motif. According to Robertson's folklore, the company adopted the golly as its brand image after John Robertson (son of James Robertson) saw children in the United States playing with a black rag dolls with white eyes, made from their mothers' discarded black skirts and white blouses. The idea of Golly trade mark was accepted by the Company and the Golly was first shown on Robertson's literature in 1910, on items such as labels and price lists.

1920s The company started to issue brooches (also called pins or badges) carrying the Golly image and continued to do so until 2002.

1928 Robertson's started the Golly brooch collector scheme which became the longest running collector scheme in history only finishing in 2001 when Golly was replaced by Roald Dahl characters. This has since been withdrawn. The first badge to be produced was the Golly Golfer.

1939 The Golly badge scheme was discontinued as the metal was needed for the war effort.

1956 The Golly pendant with chain was introduced by popular demand and soon after, the design of all Gollies changed from the old Golly with "pop eyes" to the present day Golly with eyes looking to the left. The words "Golden Shred" were removed from his waistcoat, his legs straightened and smile broadened. At about the same time a range of 11 Footballer and 12 Musician Golly figures were produced in pottery, standing about 2.5" high. These were eventually discontinued.

Several generations have affectionate childhood memories of saving Gollies from the back of Robertson's Jams and Marmalades and sending away for enamel Golly badges.

Over 20 million Gollies have been sent out and many have become highly valued collectors' items.

1981 James Robertson and Sons was acquired by Avana[2]

2001 The Golly scheme finished when Golly was replaced by Roald Dahl characters. This has since been withdrawn.

2002 Robertson's officially 'retired' Golly. The company had found that Golly was, on the whole, no longer popular with the children of families, although the scheme was still successful with adult collectors.

2008 The company trademarks were owned by Centura Foods. Centura also owns the trademarks for James Keiller and Son another manufacturer of marmalade.

2012 Premier Foods announced that it had reached a conditional agreement to sell its sweet spreads and jellies business to The Hain Celestial Group. This included the Hartley's keiller, Gales, Frank Cooper, Robertson's and Sun-Pat brands.[3]

2017 Now part of the Hain Celestial Group and producing a limited range of the original product lines.