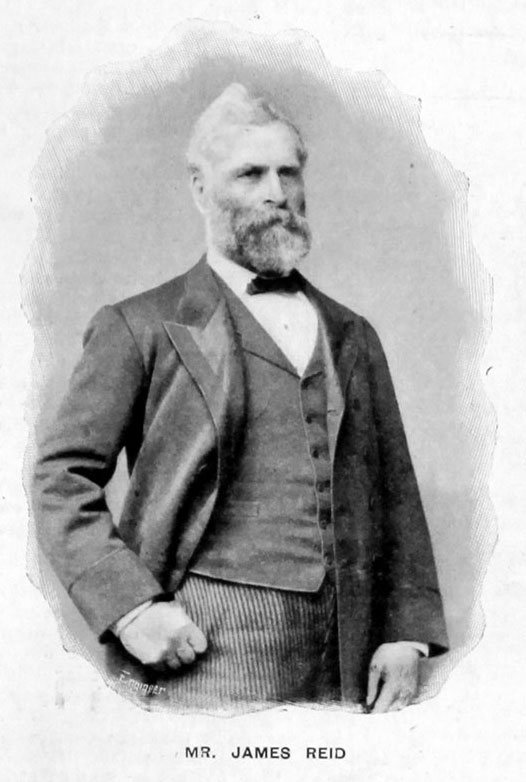 1823 Born in the parish of Kilmaurs, Ayrshire, on the 8th September.

Engaged as a blacksmith's assistant.

Served an apprenticeship to Mr. James Liddell, millwright and engineer, of Airdrie

Subsequently served in the works of the Kilmarnock Foundry Co.

1847 With Scott, Sinclair and Co of Greenock, marine engineers and shipbuilders

Then moved to Caird and Co of Greenock, engaged in marine engineering and shipbuilding and in the construction of locomotives, where he became manager.

1858 Reid left Neilsons when Henry Dubs was appointed manager; he became manager of the locomotive works of Sharp, Stewart and Co in Manchester.

1863 When Henry Dubs left Neilson's Hyde Park Works to start the Glasgow Locomotive Works at Polmadie, Mr. Reid returned to Neilson and Company as managing partner. From then on he devoted all his energy to the development and extension of the works. At that time about 1,000 men were employed.

1876 Exercised his option to purchase the company, so became sole proprietor

1894 By the end of his career the number of employees had increased to about 2,500, with annual output of 200 locomotives.

1894 Died suddenly in June. Obituary in 'The Engineer'

1898 The name of the company was changed to Neilson, Reid and Co

JAMES REID was born in the parish of Kilmaurs, Ayrshire, on the 8th September, 1823. Like so many engineers who have risen to the front rank of the profession, he was a self-made man. Such education as he received was obtained at the village school and at the outset of his career he was engaged as a blacksmith's assistant.

Anxious to improve his position, he served an apprenticeship to James Liddell, millwright and engineer, of Airdrie, and was subsequently for a time in the works of the Kilmarnock Foundry Co.

From 1847 to 1851 he was first with Scott, Sinclair and Co, and then with Caird and Co, both of Greenock, engaged in marine engineering and shipbuilding and in the construction of locomotives. In the service of the latter firm he rose from the position of chief draughtsman to that of manager.

Mr. Reid was not nine-and-twenty years of age when in 1851 he was appointed manager to the Hyde Park Locomotive Works, Glasgow, owned by Neilson and Co.

After holding that position for some years he removed to Manchester, having accepted the appointment of manager of the Locomotive works of Sharp, Stewart and Co.

In 1863, however - when the late Henry Dubs retired from the management of the Hyde Park Works to start the Glasgow Locomotive Works at Polmadie - Mr. Reid returned to Messrs. Neilson and Company as managing partner and from that time until his death, a period of more than thirty years, he devoted all his energy to the development and extension of the works, now one of the largest private locomotive establishments in the United Kingdom.

During his residence in Manchester the works had been removed from Hyde Park Street to Springburn, the plans for the new shops having been so drawn that additions could be made without destroying the original scheme. So well was this done that it is stated the works in their completed form appear to have been entirely constructed at one time.

As an indication of the progress made under Mr. Reid's management, it may be mentioned that when he returned to Glasgow in 1863 about 1,000 men were employed, the number of engines turned out in that year being 78 ; while now the number of hands has increased to about 2,500, and the average annual output of locomotives to 200.

Mr. Reid's original agreement with the firm was for a period of ten years. On the expiration of that term a new arrangement was made which gave him the option of purchase. That power he exercised in the year 18i6, from which date until 1893, when his four sons were taken into partnership, he was the sole proprietor of the works.

In 1886 Mr. Reid exhibited at the Edinburgh Exhibition an express bogie passenger engine, which not only obtained a gold medal but was destined to attract more than the usual amount of attention. Engine No. 123 was built for the Caledonian Railway Company, on which system it has been running since 1886. It has two tenders, the larger one being used for long journeys. During the racing trials from London to Scotland on the 8th of August, 1888, it ran between Carlisle and Edinburgh, a distance of 100.75 miles in l02.5 minutes. That this performance may be duly appreciated, it should be stated that the journey is a very heavy one, with long stretches of steep inclines, including one to Beattock summit, 10 miles in length, with a gradient of 1 in 80. The train weight was estimated at 88 tons, which with the engine and tender made a total gross load of 165 tons. The highest registered speed during the trip was 74 miles per hour and the lowest exactly one half, 37 miles per hour. The time was taken at each mile post. The first 40 miles were covered in 39 minutes and the last 16 miles in 14 minutes 23 seconds.

Mr. Reid’s inventive faculties, as the necessity for their application arose, were frequently exercised in the contrivance of special tools, amongst which may be mentioned a crank-pin-hole boring-machine and outside crank-pin turning-machine for performing these operations after the wheels or cranks are keyed on their axles. He also designed multiple-tool planing-machines for axle-boxes and slide-bars, wheel-bossing and tire-boring lathes, an axle-centering and end-cutting machine, besides smaller tools for various purposes.

He designed and patented a locomotive for yard work, the engine being fitted with a steam-crane attached to the chimney, so as to be able to load or unload a wagon on the same line of rails on which it stands, the movements of the crane being controlled from the engineman’s platform.

The life of Mr. Reid may indeed be said to have been identical with the extension of the locomotive industry and to that fact the position he attained was in some measure due. But he had native qualities which could not fail to command success - an iron will, indomitable perseverance, sterling integrity and most methodical business habits.

For many years after he became managing partner he was in the works as punctually on the stroke of six o’clock as any of his men and he frequently remained there until late at night. Without any unusual amount of theoretical knowledge, Mr. Reid had the faculty of seeing instinctively the means of obtaining a desired result. His instructions were given with promptness and decision; and he seldom made a mistake, though in all cases he imperatively insisted on implicit obedience to his orders. He had great experience, firmness and tact in the management of men, and there was rarely a dispute at the Hyde Park Works under his rule. He would often speak of an experience in his early life when a fellow-workman found fault with him for doing too much work, declaring that he would soon find himself out of a job. His reply - that he meant to work as well as he could, to do as much as he could and to brook no interference - was characteristic of the man throughout his long and useful life.

Fully occupied though he was, Mr. Reid yet found time to interest himself in affairs beyond the limit of his large business.

For some years he was a member of the Town Council of Glasgow and in November, 1893, he was elected by the Merchants' House Lord Dean of Guild, an office which requires the holder to take cognizance of all the new buildings erected and alterations made in existing structures within the city boundaries. At various times he acted as President of the Institution of Engineers and Shipbuilders in Scotland, Chairman of the Glasgow Tramway Co and of the Springburn School Board, and President of the Glasgow Fine Arts Institute. He was also a Justice of the Peace for the counties of Lanark and Perth. Mr. Reid always displayed a warm interest in the welfare of his workmen and encouraged their schemes of recreation. He placed in Springburn Public Park a handsome band-stand for the benefit of the numerous workmen living in that district.

Mr. Reid died suddenly from heart disease on the 23rd of June, 1894. He had been staying at St. Andrews and was playing. golf when he suddenly complained of faintness and almost immediately fell to the ground. Assistance was at once rendered, but before medical aid could be procured life was extinct.

Mr. Reid was elected a Member of the Institution on the 6th of February, 1877.

JAMES REID was born at Kilmaurs, Ayrshire, on 8th September 1823, and such education as he got was received at the village school.

At the outset of his career he was engaged as a blacksmith's assistant.

Then he went to Greenock, where he was employed by Messrs. Scott, Sinclair and Co., and afterwards as an engineer by Messrs. Caird and Co. Being transferred to the drawing office, he rose in 1850 to the position of chief draughtsman.

In 1833 be became manager of the Hyde Park Locomotive Works, which at that time were situated in the Anderston district of Glasgow.

After remaining there some years, he went to Manchester as manager of the locomotive works of Messrs. Sharp, Stewart and Co.

In 1863 he returned to the Hyde Park Locomotive Works as managing partner in the firm of Messrs. Neilson and Co., in succession to Mr. Henry Dubs, who had started the Glasgow Locomotive Works at Polmadie. During his stay in Manchester the Hyde Park Works had been transferred in 1860 to Springburn; and under his direction these became the largest locomotive establishment in private hands in the country.

In 1863 about 1,000 men were employed here, and the number of engines turned out was 78 annually; lately the number of men employed had increased to about 2,600, and the output to over 200 locomotives a year.

In 1878 he became by purchase the sole proprietor of the works; and in 1893 took into partnership his four sons.

In 1877 he became a member of the Town Council, and in 1893 was elected Lord Dean of Guild by the Merchants' House, of which body he had long been a member. He was also president of the Fine Art Institute, president of the Institution of Engineers and Shipbuilders in Scotland, a member of the Institution of Civil Engineers, and a justice of the peace for the counties of Lanark and Perth.

His death occurred suddenly at St. Andrews from failure of the heart on 23rd June 1894, in his seventy-first year.

He became a Member of this Institution in 1883.