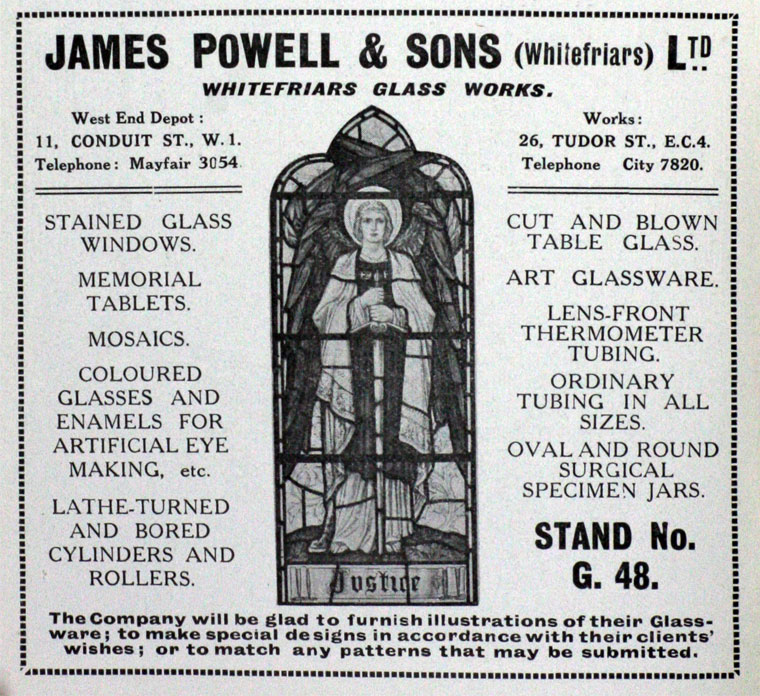 1710 The business was founded in 1710 by one William Davis, who chose the site probably because of its nearness to the Thames wharves and also because of the cheapness of the land consequent upon its unsavoury reputation. Succeeding Davis came Alexander Seal, Carey Stafford, Stephen Hall, Hall and Holmes, John Holmes, and, in 1834, Mr. James Powell. The works have since remained in the possession of the Powell family. It is highly interesting to learn that even to-day no machinery is employed in the works for glass blowing or moulding, and that all the operations are carried out by hand after the manner of the ancient glass blowers. The works specialise in such items as decanters and table ware, and to a particular degree in stained glass windows and mosaics. English stained glass window practice owes its renaissance very largely to the Whitefriars work and the co-operation of William Morris, Sir E. Burne-Jones, Sir W. B. Richmond, and other artists with its craftsmen. In such an industry the question of labour supply is bound always to provide some anxiety, tor where so much depends upon the individual craftsman's art, suitably skilled workers already trained are hard to find. The firm is now taking this matter very seriously in hand, and is at present giving preparatory courses of instruction to a number of elementary pupils from the Harrow schools with a view to entering them in the new factory as vacancies occur among the ranks of the skilled workers. [1] Taken from The Engineer 1923/01/26

The Whitefriars glassworks, later Whitefriars Glass Limited, was owned by James Powell and Sons from 1834. It produced the highest quality glass until the business closed in 1980. Today, the company is best remembered for its exquisite tableware, bold decorative glass and stained glass windows. It also produced more specialised products such as thermometer tubing, and throughout its history pioneered numerous innovations in glass technology.

c1900 At the turn of the century, the Whitefriars factory was between Fleet Street and the River Thames.

1923 A new factory was opened in Wealdstone near Harrow, northwest London. The furnaces were lit at the new factory using the flame from a furnace at the old works, which had been carefully carried across London in a brazier. The company also had showrooms on Wigmore Street, which appealed to customers for both domestic and window glass.

1954 Geoffrey Baxter, a well-known glass designer, joined the factory after graduating from the Royal College of Art.

1960s Baxter began to experiment with a new moulded glass.

1963 The company changed its name to Whitefriars Glass Limited.

1967 The Textured range was introduced. The pieces were made in moulds using tree bark, nails, wire and other materials to produce alternative textures to the glass.

1980 Interest rates, high fuel costs and a recession all played their part in the closure of the Whitefriars factory in December. The company records and numerous pieces of glassware were given then to the Museum of London.