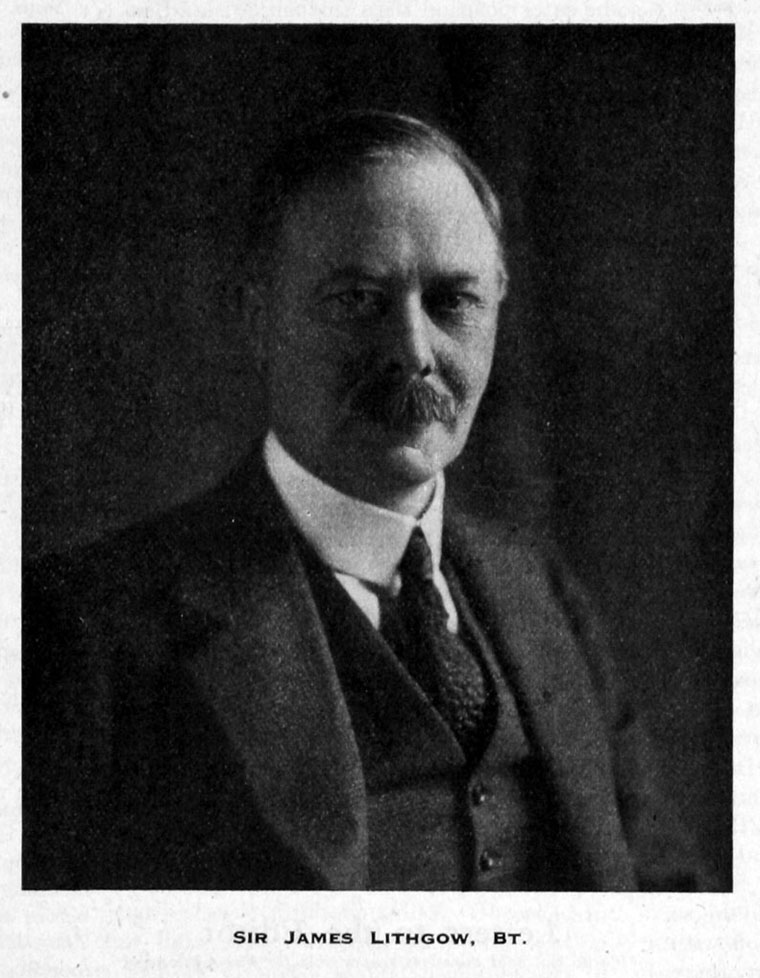 Sir James Lithgow (1883-1952), of Lithgows, was a Scottish industrialist who played a major role in restructuring the British shipbuilding and steel making industries in the 1930s in addition to playing an important role in formulating public policy and supervising wartime production.

1883 January 27th. Born in Port Glasgow, Scotland, the son of William Todd Lithgow and in the same year his parents moved to Langbank. His father was a partner in the shipbuilding firm of Russell and Co and James was educated along with his brother Henry Lithgow, at first privately at home then at the Glasgow Academy before the two were apprenticed in the shipbuilding industry. William's health failed in 1907 and his two sons were made partners. William died the following year and the two brothers, who were very close, took control of the company.

The brothers developed the business with James taking on a wider industry role in the Clyde Shipbuilders' Association where he met Andrew Rae Duncan. The brothers agreed that in the event of war, James would take on military service while Henry would run the shipyard so James joined the Royal Garrison Artillery, initially in the Volunteer Force, and at the creation of the Territorial Force he was a lieutenant.

During World War I, James served in a howitzer battery on the Western Front and was awarded the Military Cross, breveted lieutenant-colonel and awarded the Territorial Decoration. However, James became resentful of his military service believing that he would contribute more to the war effort back at the shipbuilding yard. It was not until May 1917 that Sir Eric Campbell Geddes appointed him director of merchant shipbuilding with responsibility to ensure that production targets were achieved. This was James's first step into public life and policy, and introduced him to men such as Lords Pirrie and Weir. While carrying out this role he was given the acting rank of lieutenant-colonel, and attached to the Royal Engineers.

James rejoined Henry in the business in 1919 at which point they restructured the partnership of Russell & Co into a private limited company Lithgows Ltd. They then embarked on a rapid process of acquisition and expansion, adopting vertical integration and taking the company into coal mining and steelmaking. However, James was becoming increasingly involved in public affairs, being appointed a Deputy Lieutenant of Renfrewshire in 1919, and becoming president of the Shipbuilding Employers' Federation in 1920. James renewed his contacts with Lord Weir who was then president of the National Confederation of Employers' Organisations. James became vice-president of the National Confederation in 1922 and was the United Kingdom's representative at the International Labour Organization in Geneva between 1922 and 1927, making a connection with Horace Wilson. James was created a baronet by Stanley Baldwin in the 1923 King's Birthday Honours for this work.

The brothers purchased the engine works of Rankine and Blackmore in 1923. James had retained his Territorial commission, and was promoted to substantive lieutenant-colonel in 1924, and was appointed Honorary Colonel of the Clyde Heavy Brigade, Royal Artillery.

This was the era of Red Clydeside and the brothers had strong views on shipbuilding and industry in general. James was the public spokesman of the two and was vocal in his criticism of organised labour. James believed in rigorous management control of costs and wages through the use of automation and technology, and efficient exploitation of manual labour. He further believed that there was overcapacity in the shipbuilding industry and that yard closures and job losses were inevitable. James saw organised labour as naturally opposed to his policies but claimed that a rationalised industry would provide sustainable jobs and provide a basis for growth.

Through Duncan, James approached the governor of the Bank of England, Montagu Norman, to underwrite a rationalisation scheme for the shipbuilding industry.

In 1930 National Shipbuilders Securities (NSS) was created with James as chairman and architect of a scheme to reduce shipbuilding capacity. At the same time he became president of the Federation of British Industry and chairman of the Scottish National Development Council. In the decade to 1939, the NSS purchased and closed around a third of British shipbuilding capacity.

William Beardmore and Co owed considerable debt to the Bank of England and its Dalmuir yard was the first to close under the scheme, the proceeds of its liquidation paying off the debt. Lithgow was the architect of the liquidation and was rewarded in 1934 by being allowed to purchase Beardmore debentures from the Bank of England on favourable terms, taking control of their iron and steel assets. It was at Beardmores that James spotted young engineering manager Ian MacGregor who broke a strike by driving a crane himself for two weeks. James accelerated his career and MacGregor went on himself to be a major industrial figure.

James now focussed his rationalising zeal on the steel industry. The Lithgows owned James Dunlop and Co and they opened talks with John Craig to merge their business with his Colville Group. The merger was finalised in 1931.

In 1934 the Bank of England helped the Lithgows to buy the Steel Company of Scotland for £672,975. In 1936 the brothers sold the company to Colville for £951,750, the profit being donated to the Church of Scotland.

Again, contacts with Norman and Duncan in 1935 allowed the Lithgows to purchase the Fairfield Shipbuilding and Engineering Company which was entangled with the insolvency of the Anchor Line.

It is with deep regret that we record the death of Sir James Lithgow, the well-known Scottish shipbuilder and leading industrialist, which occurred at. his home, Gleddoch House, Langbank, Renfrewshire, early on Saturday morning, February 23rd.

Sir James, who was engaged in shipbuilding activities all his life, was born in 1883. He was a member of a shipbuilding family, being a son of the late W. T. Lithgow, who was a partner in the shipbuilding firm of Russell and Co., of Port Glasgow.

James Lithgow was educated at Glasgow Academy and in Paris, and in 1901 joined his father's shipbuilding company, where he spent the next five years acquiring his knowledge of shipbuilding and shipyard management.

For a short time he acted as assistant manager of the shipyard and then, in 1907, Sir James and his brother, the late Henry Lithgow, were taken into the partnership, which eventually developed into the family business now known as Lithgows, Ltd. James Lithgow, from a comparatively early age, undertook responsibilities outside those immediately connected with his own shipyard and in 1912 was made president of the Clyde Shipbuilders' Association.

In the first world war he commanded a heavy battery of t he R.G.A., having received his commission in the Renfrew and Dumbarton R.G.A. in 1902. During his service in France he was wounded, mentioned in despatches and awarded the M.C.

The Admiralty, however, recalled him from France in 1917 to take up duty as Director of Shipbuilding Production in the Controller's Department.

After the war he continued his connection with the Territorial Army and in 1924 became Honorary Colonel of the Clyde Heavy Battery, R.A.

In the years between the two wars Sir James, in addition to participating fully in the activities of the family business, found time to devote to the problems of the nationalisation of the shipbuilding industry, which, in the immediate post-war years, suffered from an excess of productive capacity due to war-time expansion. In association with other shipbuilders, he helped to establish the industry on a sounder economic basis in an effort to meet the periodic depressions to which the industry was subject. His immense energy and his flair for organisation marked him out as a leader in the industrial field and in 1922 he was elected president of the Shipbuilding Employers' Federation, which was, at that time, the industry's only national organisation.

In the next two years he was concerned in the formation of the National Confederation of Employers' Organisations, now the British Employers' Confederation, of which he became president in 1924. His activities were not wholly engaged in the work of national organisations, for Sir James attended the International Labour Conference of the League of Nations, at Geneva, as a British employers' delegate, and for six years, from 1922 to 1928, was a member of its governing body, of which he was again a member from 1933 to 1935. His services in many fields were recognised when he was created the first baronet of Ormsary in 1925.

Many bodies outside the realms of shipbuilding sought the benefit of Sir James Lithgow's advice and experience in labour and production problems, and he served for three years from 1927 as a member of the Central Electricity Board. In the wider commercial side of industry he undertook heavy responsibilities when he became president of the Federation of British Industries during the years 1930-31 and 32, at a time when the country was suffering from a severe depression. As a shipbuilder he was interested in the production of steel, particularly in Scotland, and he had much to do with the revitalisation of the industry in that country.

He was chairman, for a period, of both the Steel Company of Scotland, Ltd., and William Beardmore and Co., Ltd., and was also associated with Colvilles, Ltd., while during the years 1943 44-45 he carried out the duties of president of the British Iron and Steel Federation. The prosperity of Scotland and particularly his native Clydeside were matters of great personal interest and he was chairman of the Scottish Development Council, which is now the Scottish Council (Development and Industry), from the time of its formation, in 1931, until 1939.

With the outbreak of the second world war, events of the first world war were repeated, when the Admiralty decided to use the wide industrial experience, outstanding organising ability and far-sighted vision of Sir James, and invited him to become a member of the Board. This occurred in 1940, when the Admiralty took over, from the Ministry of Shipping, the supervision of merchant shipbuilding and repairs and • a.ppojntcd ~ir .James to the post of Cont. roller, where he had the able assistance of the late Sir Amos Ayre as Director. Durin~ tho next six years he carried the heavy responsibility of formulating and carrying out a national shipbuilding policy, which waA destined to play such an imJ>ortant role, in the general strategic policy of the wa1·, by utilising, to the full, the vast shipbuilding potential of the United States to the mass production of tonnage to overcome the submarine menace and to keep this country supplied with the means to carry on the war. For his valuable services in directing the war-time shipbuilding effort of t hiH country he 'vas created G.B.E. in the 1945 New Year Honours, and two years later was honoured with the award of the C.B., while Glasgow University conferred on him the honorary degree of Doctor of Laws.

Although his principal activities were concerned with the organisation of shipbuilding and allied industries, Sir James maintained an interest in technical developments and was a member of the Institution of Naval Architects from 1922 and was president of the Institution of Engineers and Shipbuilders in Scotland for 1929- 31. He also made a practical contribution to further the work of the National Physical Laboratory in research on ship propeller design.

He also gave some time to civil affairs and had been Vice-Lieutenant of Renfrewshire, his native county, since 1943.

At the time of his death, Sir James was the president of the Fairfield Shipbuilding and Engineering Company, Ltd., having resigned the chairmanship of the company a short time ago, and was chairman of the family shipbuilding business of Lithgows, Ltd. He was interested in a number of other shipbuilding and engineering companies and was a director of William Hamilton and Co., Ltd., David Rowan and Co., Ltd., the Ayrshire Dockyard Company, Ltd., and British Polar Engines, Ltd.

By the death of Sir James Lithgow, Scotland has lost an eminent ship builder and a leading industrialist and administrator and one who had done much to foster Scottish industries and prosperity.