Grace's Guide is the leading source of historical information on industry and manufacturing in Britain. This web publication contains 138,889 pages of information and 225,312 images on early companies, their products and the people who designed and built them. 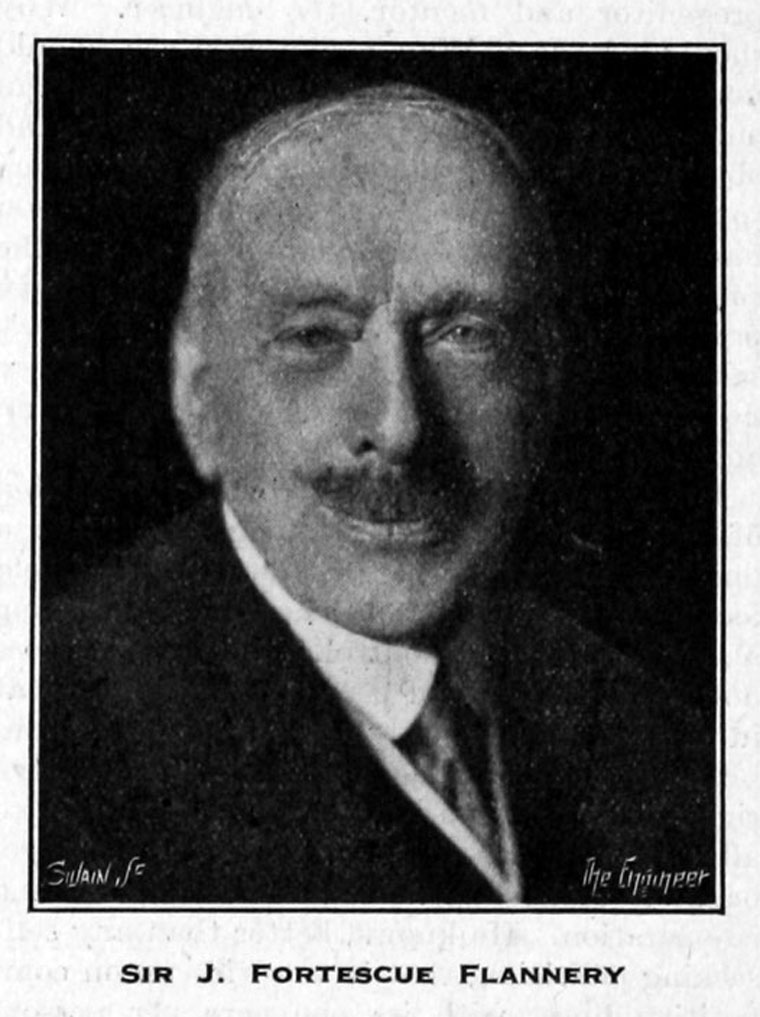 Sir James Fortescue Flannery (1851-1943), founder and chairman of Flannery, Baggallay and Johnson, Ltd., and the chairman of Callender's Cable and Construction Company, Ltd. For several years he was chairman of W. and T. Avery, Ltd.

IN our last issue we briefly announced the death of Sir J. Fortescue Flannery, Bart., which took place at his country home, Wethersfield Manor, Essex, on Tuesday, October 5th, in his ninety-second year.

He was for many years well known as a marine engineer and naval architect of outstanding ability, and was the founder and chairman of Flannery, Baggallay and Johnson, Ltd., and the chairman of Callender's Cable and Construction Company, Ltd. For several years he was chairman of W. and T. Avery, Ltd., a position from which he only resigned at the beginning of the war.

James Fortescue Flannery was the son of the late Captain John Flannery, of Seacombe, and was born and educated on Merseyside. In his early years he was privileged to make several voyages across the Atlantic in the sailing ships commanded by his father, and thus gained a working knowledge of ships and the Sea. He started his career in the office of Mr. David Campbell, a consulting engineer in Liverpool, and after a few months began to serve a five years' apprenticeship in the Britannia Engine Works of James Taylor and Co. at Birkenhead.

Following his apprenticeship, young Flannery worked in the drawing-office at Britannia Works, and later was draughtsman with the then Liverpool firm of Fawcett, Preston and Co., Ltd. During his apprenticeship he attended evening classes at the Liverpool School of Science, an institution which at a later date was merged into Liverpool University. He was a very successful student and was first in his year, thereby gaining the Derby Prize. That year the prizes were presented by Sir Edward Reed, who only a few years before had retired from the office of Director of Naval Construction at the Admiralty. Sir Edward was struck by the ability of Flannery and offered him a post in his London office.

During the next five years he gained a wide knowledge of the design of machinery and its inspection in service, and also gained some further seagoing service, as at that time Sir Edward was engaged in the design of warships for foreign navies.

At the end of that period Flannery started in business on his own account as a consulting engineer and naval architect. He was able to get into touch with many shipowners and rapidly built up his reputation as a consultant in connection with the design and construction of cargo-carrying steamships.

He was also appointed consulting engineer to the Wallasey Ferries Company. He played an important part in the development of the oil tanker in his capacity as consultant and superintendent of the tankers owned by the Shell Transport Company, which, we may recall, was founded by the late Lord Bearsted. Some of these ships were designed to carry oil in bulk and general cargo on the return voyage. Improvements made in connection with this idea resulted in the transportation of valuable cargoes without damage in the same tanks which had previously been used to ship petrol. Attention was also given about this time to the burning of oil fuel under marine boilers, which was initiated by Lord Bearsted and worked out by Flannery. The results were successful, and the Admiralty, being interested, sent some of its engineer officers to travel in the ships and to make observations. Knowledge thus gained proved useful to the further development of oil firing in naval ships.

With his increasing practice the firm of Flannery, Baggallay and Johnson, Ltd., was founded, and offices were opened in Liverpool in partnership with Mr. E. C. Given, as Flannery and Given, Ltd., and in Rotterdam with Mr. H. B. Gregson, Wh.Sc., as Flannery and Gregson, Ltd.

Upon the death of Sir Edward Reed in 1906 Flannery, Baggallay and Johnson, Ltd., were invited to succeed him as consulting engineers and naval architects to the Crown Agents for the Colonies. In connection with this work Sir Flannery was responsible for the design and construction of a large number of ships for service in tropical climates and for use in the Dominions. His services to the nation were recognised in 1899, when the honour of knighthood was conferred upon him by Queen Victoria, while in 1904 he was made a baronet by King Edward.

In 1895 Sir Fortescue decided to stand for Parliament and was returned as Member for Shipley, Yorkshire, which he represented until 1906. After four years' interval, during which he unsuccessfully contested Cardiff, he returned to the House as Member for Maldon, Essex, the constituency in which he resided.

He resigned his seat in 1922, owing to pressure of business. In Parliament Sir Fortescue was prominent in advocating the construction and maintenance of a strong Navy, and he was one of a small group of Members which before the last war defeated the attempt to reduce naval construction on the ground of economy.

In addition to his arbitration and consulting work, Sir Fortescue found time to take up other appointments in industry, and he was chairman of Callender's Cable and Construction Company, Ltd., and W. and T. A very, Ltd., and a director of Barclays Bank, Ltd. He was an Associate of Lloyd's and served on the boards of some other companies.

Sir Fortescue was a valued member of the Technical Committee of Lloyd's Register of Shipping and sat on that Committee for several years as the representative of the Society of Consulting Marine Engineers and Ship Surveyors, of which he was a founder member and President on two separate occasions. He was one of H.M. Lieutenants for the City of London and served as Magistrate for Surrey, Kent, Essex, and London.

During his long and useful life he made many Special friends, and his work for the British shipbuilding and marine engineering industries will long be remembered.