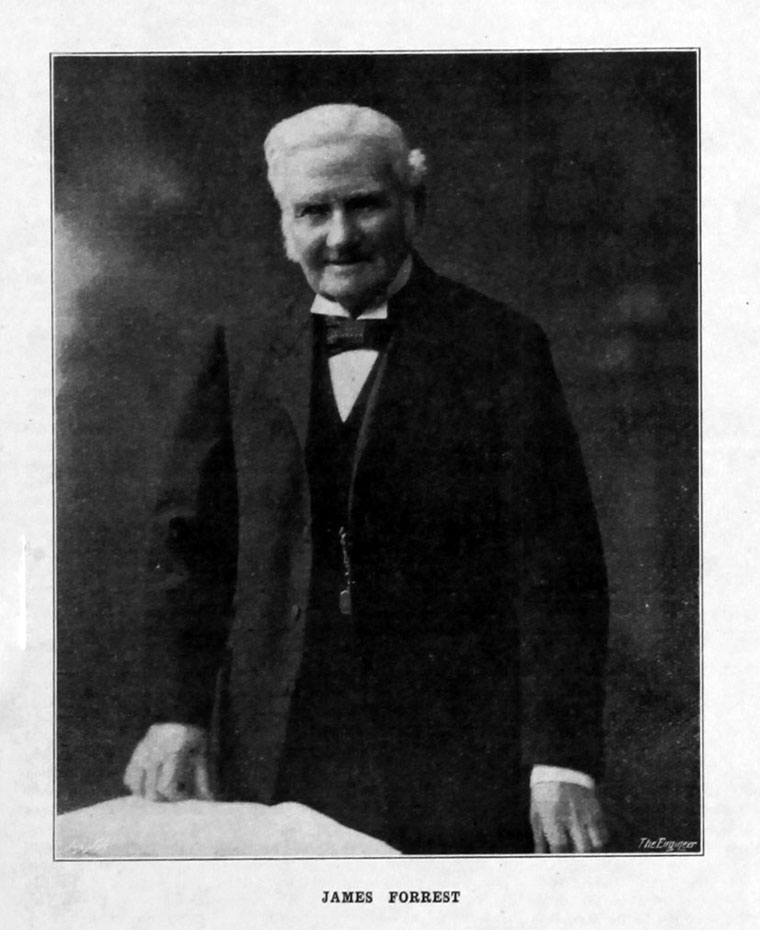 James Forrest (1825-1917), secretary of the Institution of Civil Engineers

Instigated a series of lectures.

JAMES FORREST passed away a few months after attaining the great age of 91 years, of which practically 75 were spent in the service, direct or indirect, of The Institution.

He was born in Westminster on the 30th November 1825, and began his professional training in 1842 as a pupil of Messrs. Edward and John Manby, but principally with the brother of these gentlemen, Mr. Charles Manby, who was then the Secretary to The Institution.

Later, Mr. Forrest passed a probationary period as Assistant to Thomas Grainger, a well known North-country engineer, spent principally on railways in Yorkshire, and later became Assistant Secretary of the Society of Arts.

He returned to the Civil Engineers in 1856, to succeed Mr. Manby in the Secretaryship with the title of Assistant Secretary, Mr. Manby retaining the title of Secretary until 1859, when the latter became Honorary Secretary, and Mr. Forrest was formally appointed Secretary. He had in fact during the preceding 3 years actually performed all the duties of, and had exercised, the full responsibility of Secretary.

From this time onward Forrest was a leading spirit in the "forward" movement which resulted in The Institution throwing off the trammels imposed upon it by a rather timid policy of its earlier governing body, and affirming the proposition that, far from being restricted to engineers of roads, bridges, harbours, docks, light-houses, and above all of railways, the Civil - that is, "civilian" - Engineer included all descriptions of engineers except those devoted to the military art. This view was the one adopted by Thomas Tredgold, and embodied in his classical description of an Engineer in the first Royal Charter of The Institution. Forrest’s heart-whole acceptance of this view and his untiring advocacy of it resulted in the activities and membership increasing tenfold.

The promotion of The Institution on these lines occupied his whole thoughts, it may be said, sleeping or waking, until his retirement; in 1896. To the knowledge of the writer of this notice Mr. Forrest,, after his official day at Great George Street, invariably took home with him the more important papers and documents which constituted the ordinary day’s work, in order that he might concentrate his undisturbed thought on them. In this way he had to grapple with many difficult questions submitted to the Council, notably the embarrassing case of Armstrong v. Russell, which took a whole session to settle, at the same time that his energies were devoted to frustrating action outside which threatened to affect adversely The Institution’s position. Above all, the delicate question of settling the status of the Student class with respect to the Members and Associates of that day was one that occasioned him anxious thought. But Forrest was especially successful in imbuing all who were concerned with the management of The Institution with a sense of their responsibilities towards the members, and it is remembered that at the banquet given to Mr. Forrest by the Council on his retirement one of its most prominent members playfully declared that he "ruled them with a rod of iron." Be that as it may, successive Councils were always ready to receive with the utmost consideration his recommendations for enhancing the honour and dignity of The Institution. Indeed, it was felt that the ordinary observances which mark the long service of all valued officer were in Forrest’s case quite inadequate, and in 1890 a movement for a general testimonial from the members of all classes was set afoot which resulted in the presentation of his portrait to The Institution, and of the formation of a fund which at his request was devoted to the endowment of an annual James Forrest lecture. That endowment has now been doubled by a bequest made in his will.

When he retired in 1896 a presentation made to him by past and present Members of the Council afforded him another opportunity of disposing of a sum of money, which was applied to the provision of the James Forrest Medal, to be awarded annually to the best Paper by a Student.

Mr. Forrest was elected an Associate of The Institution in May, 1852. He invariably disclaimed any title to professional distinction outside the routine of his chosen sphere, preferring to base his claim to the recognition of the members on a long period of service entirely devoted to their interests.

He died at St. Leonards-on-Sea on the 2nd March, 1917, and a large concourse of eminent members of The Institution present at a memorial service held at St. Margaret's, Westminster, testified to the regret felt at the passing away of one whose name had become as it household word to all connected with The Institution.