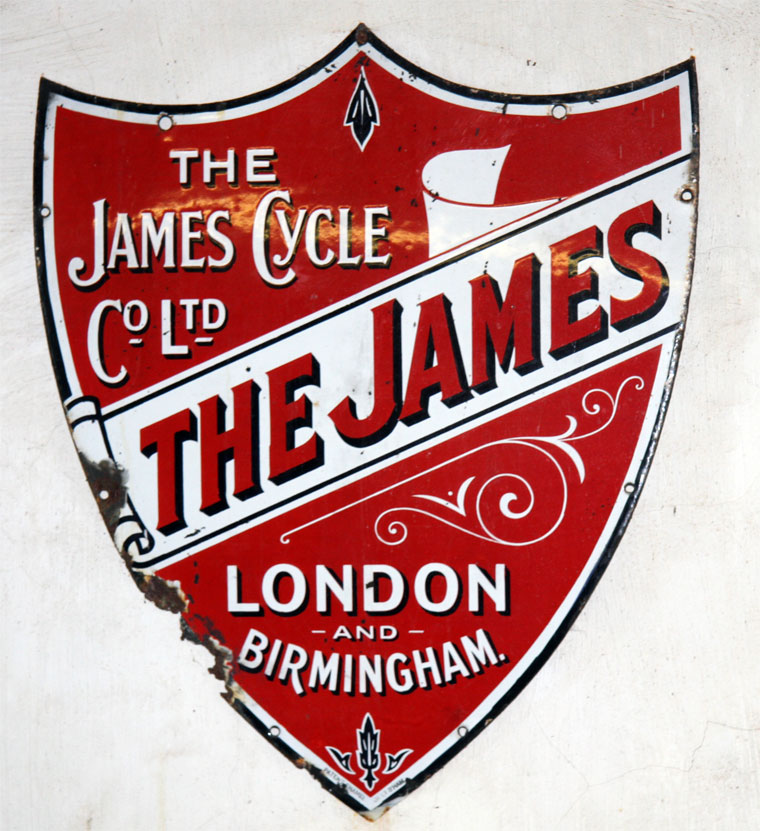 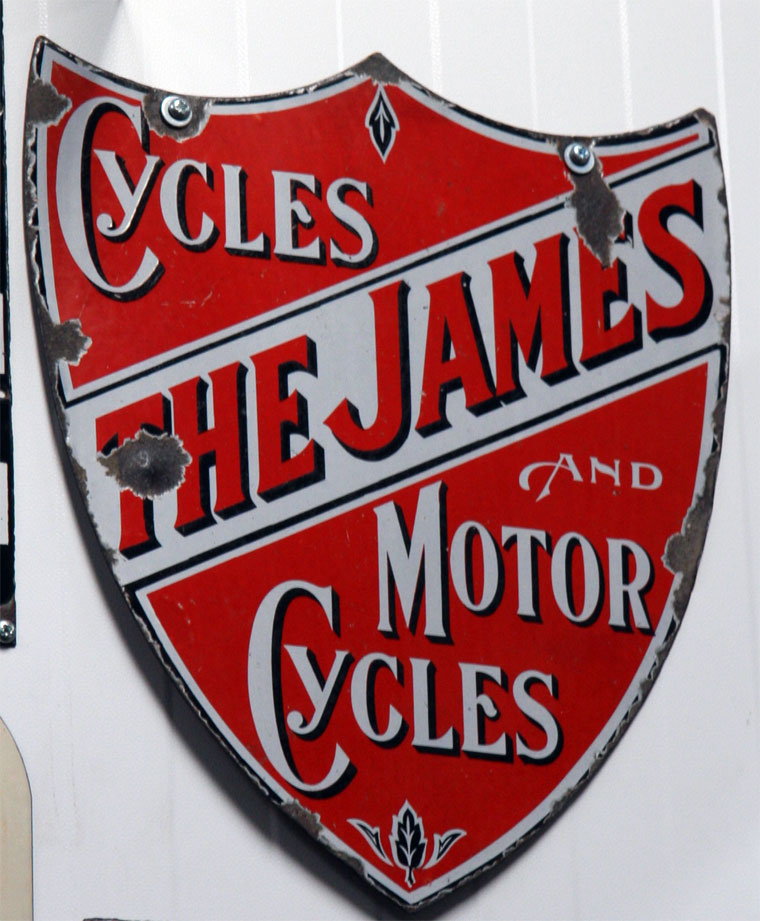 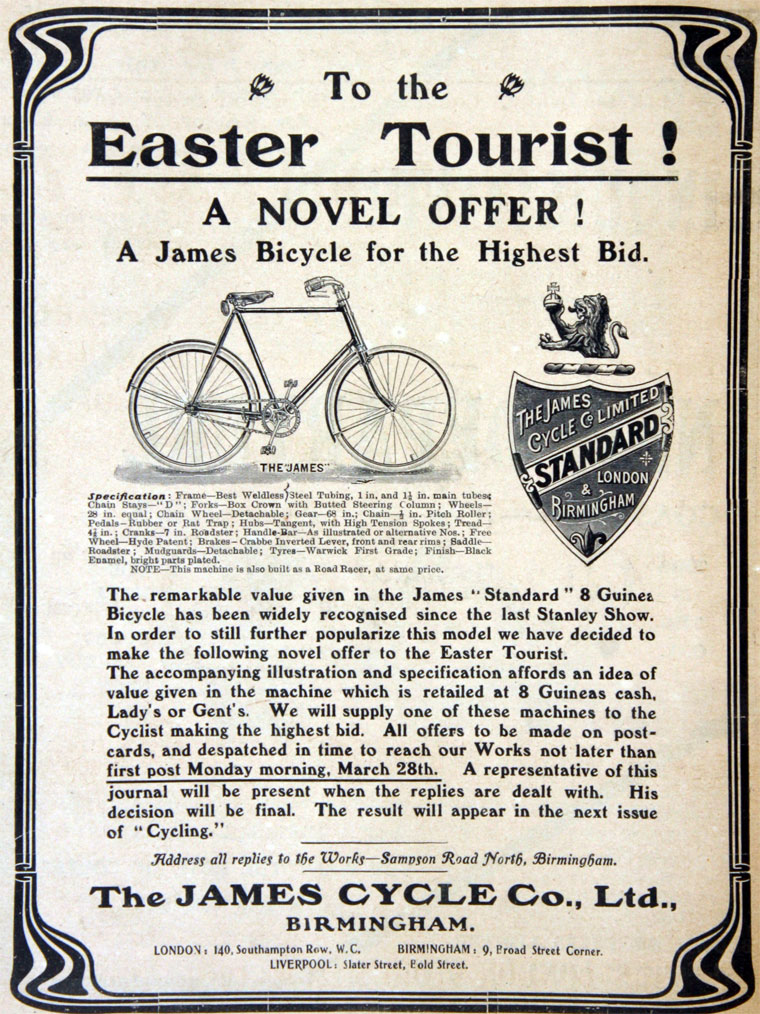 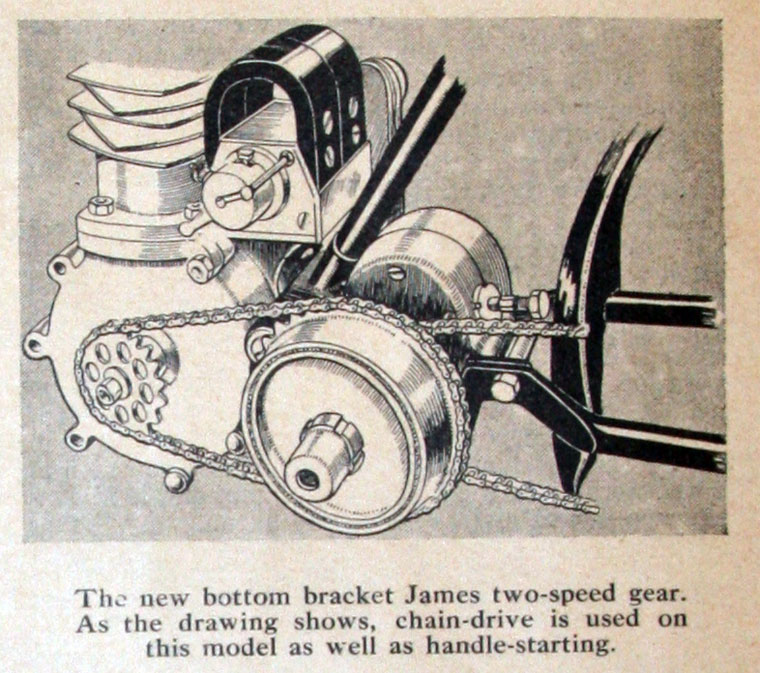 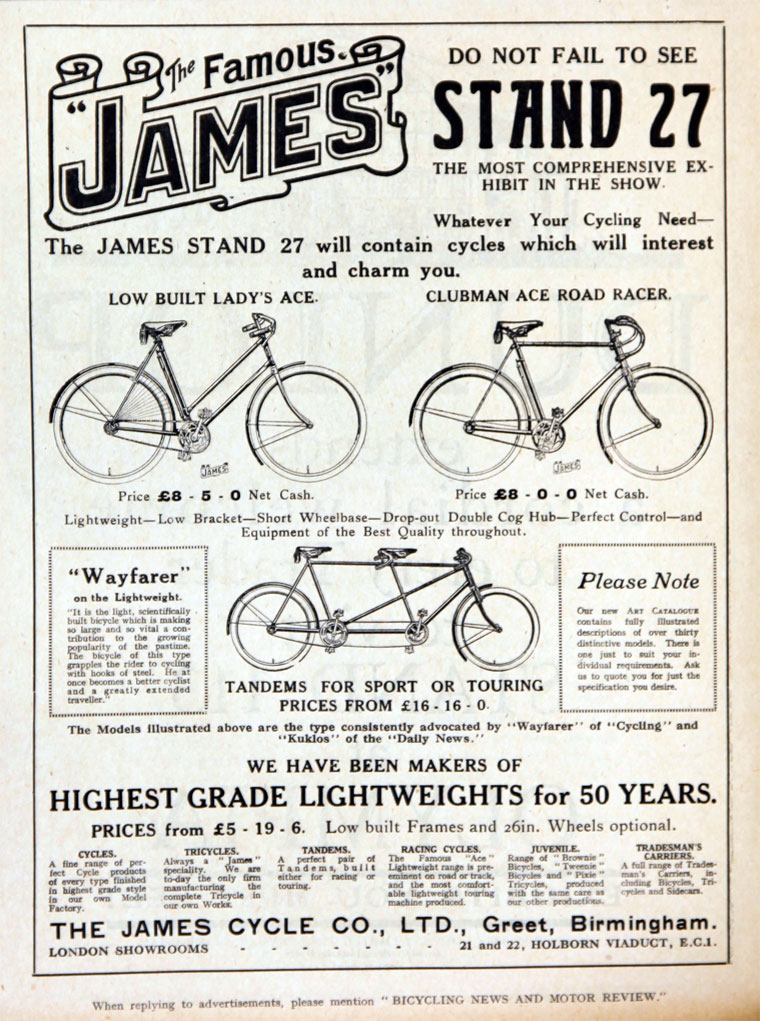 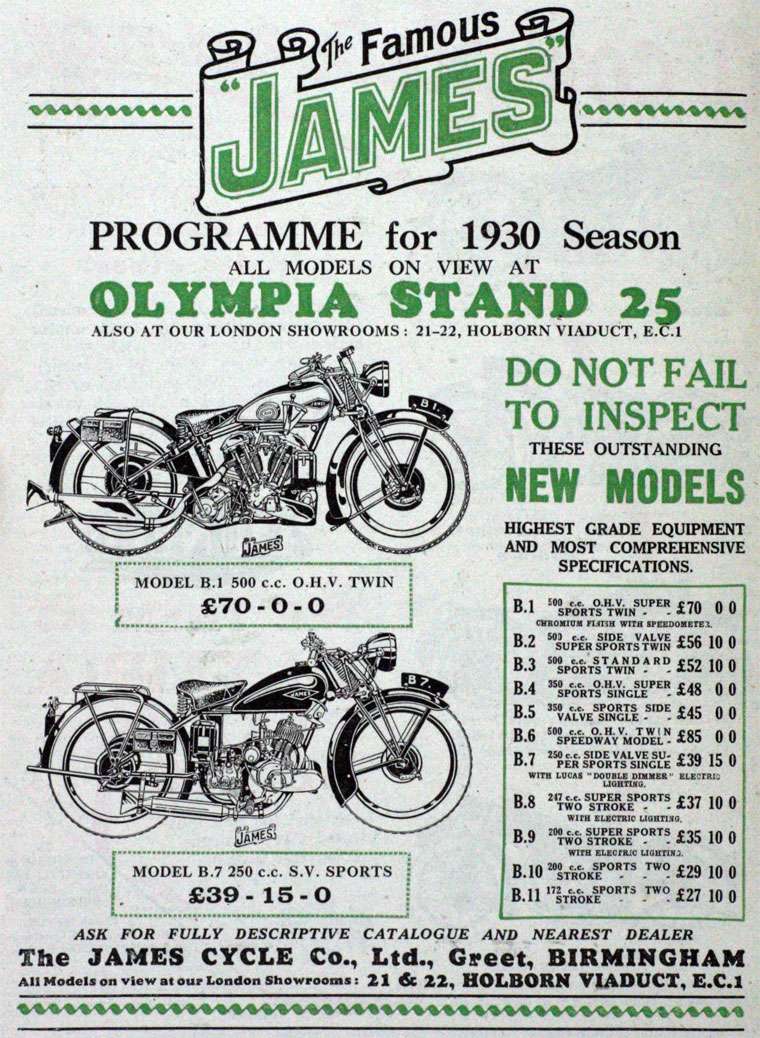 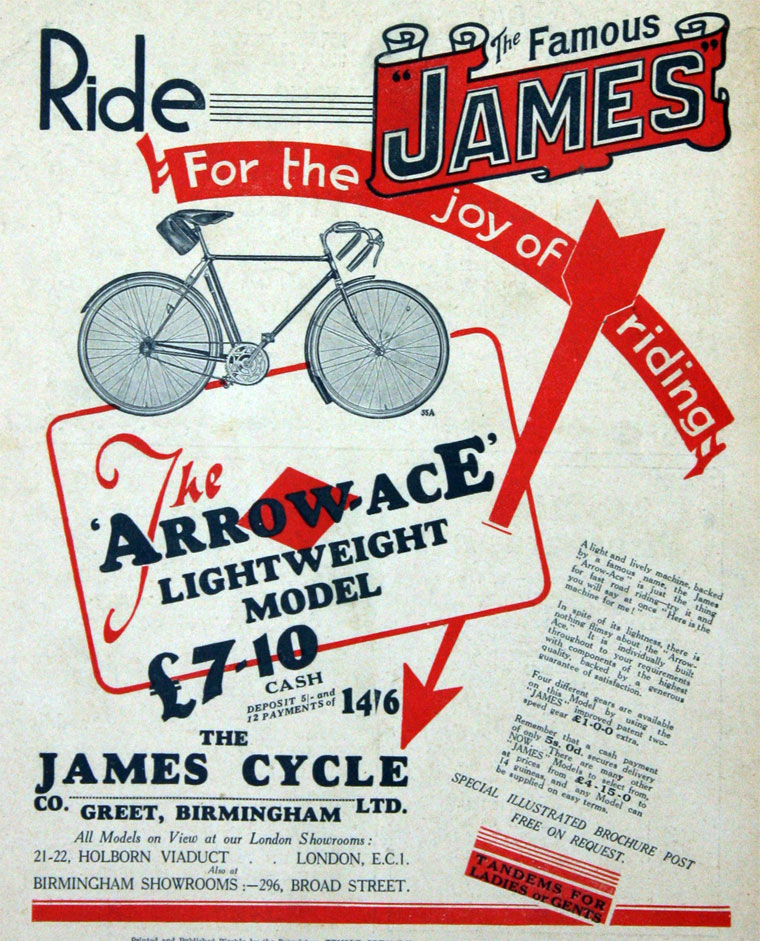 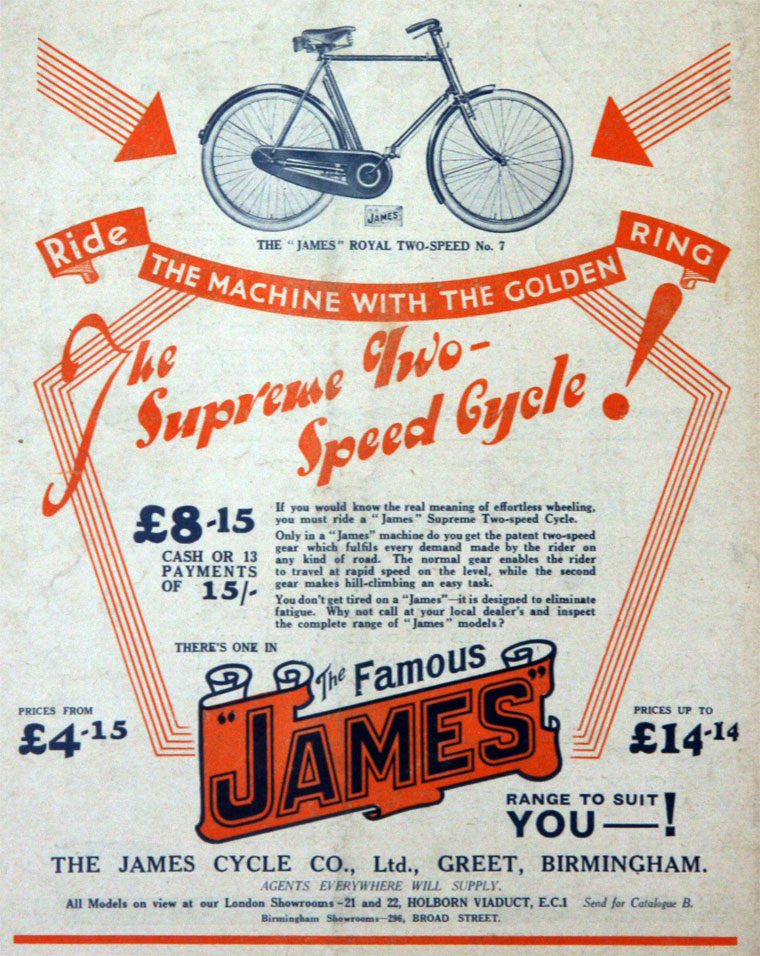 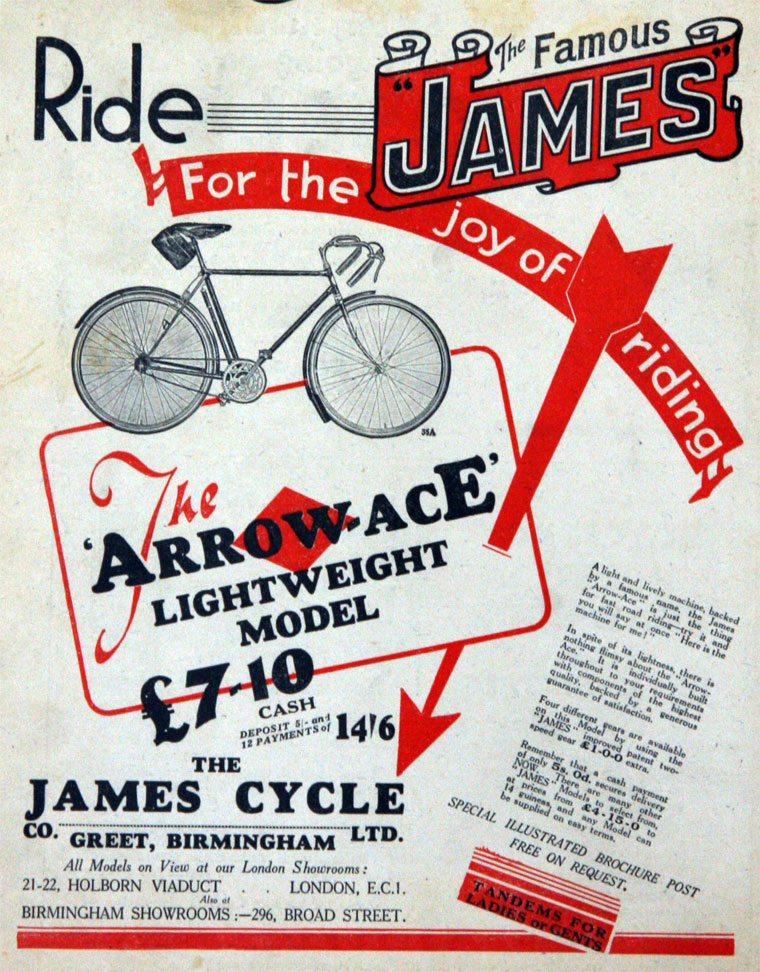 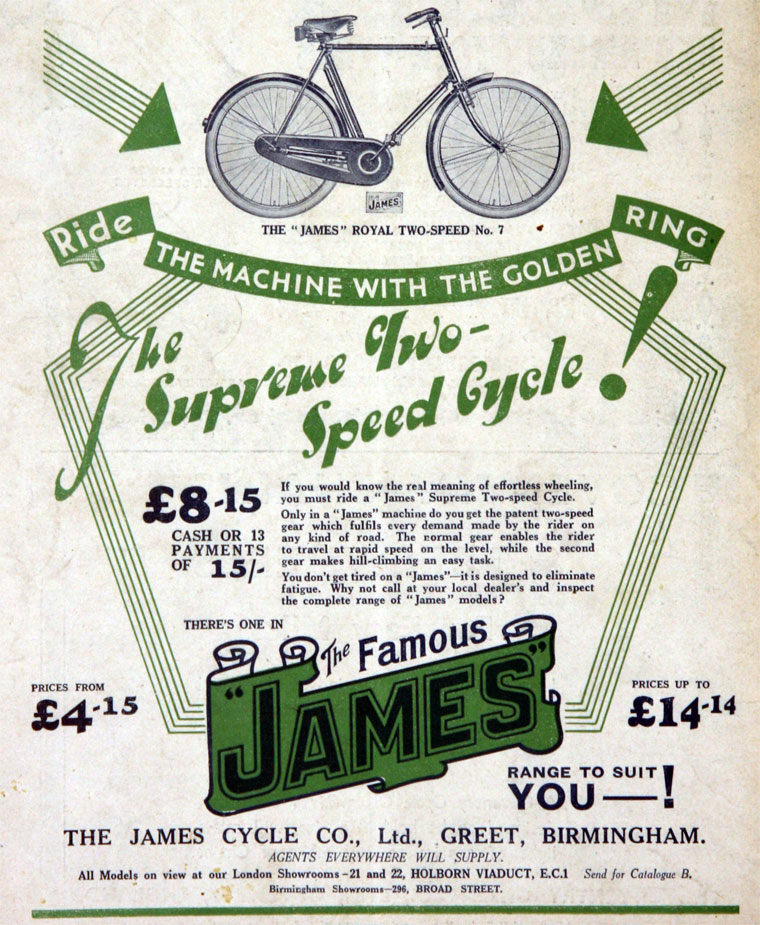 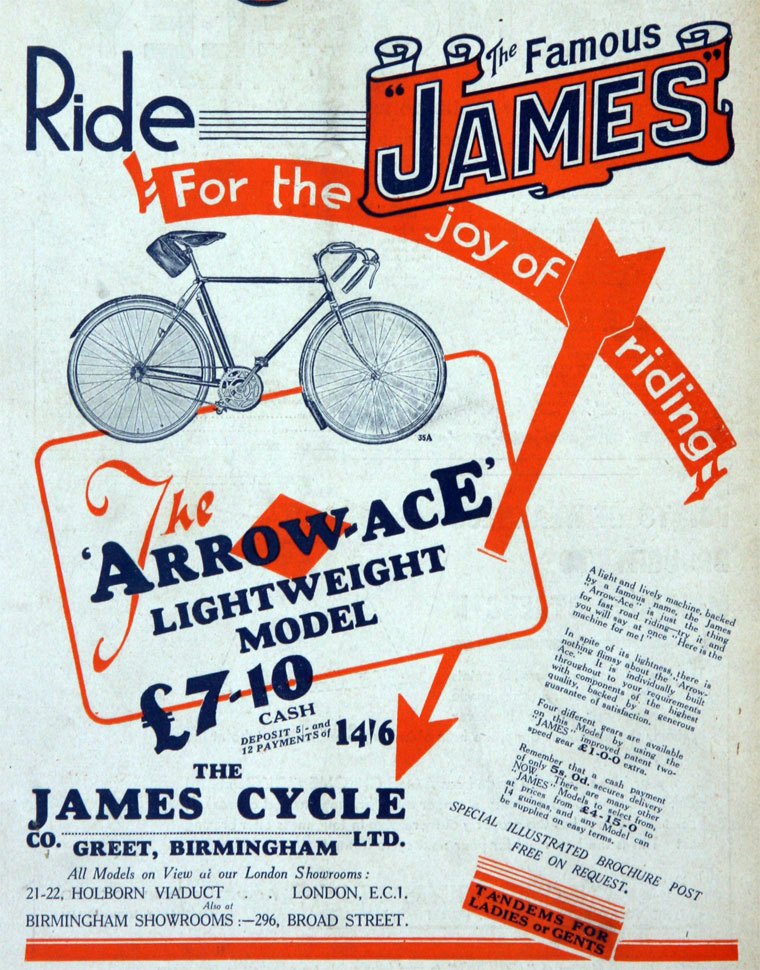 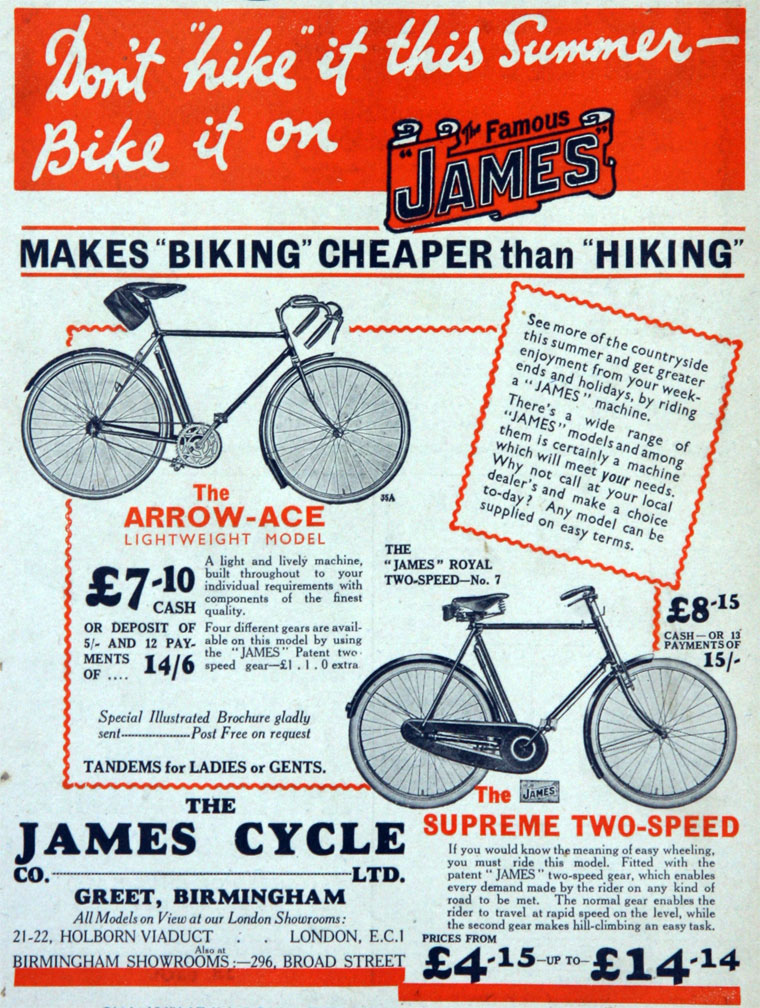 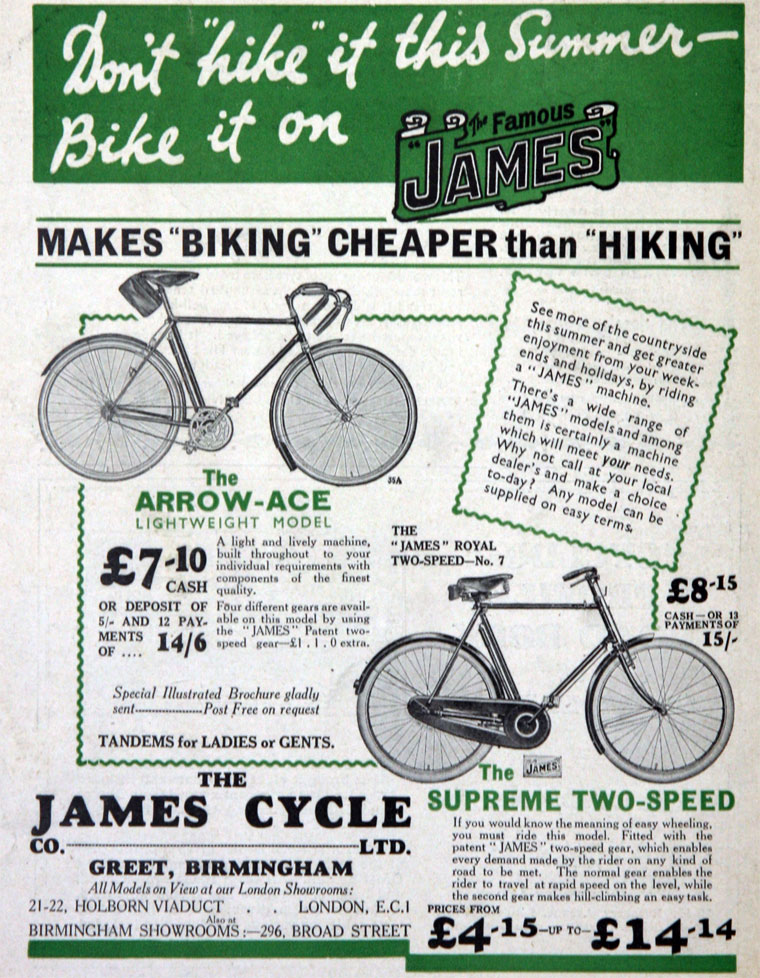 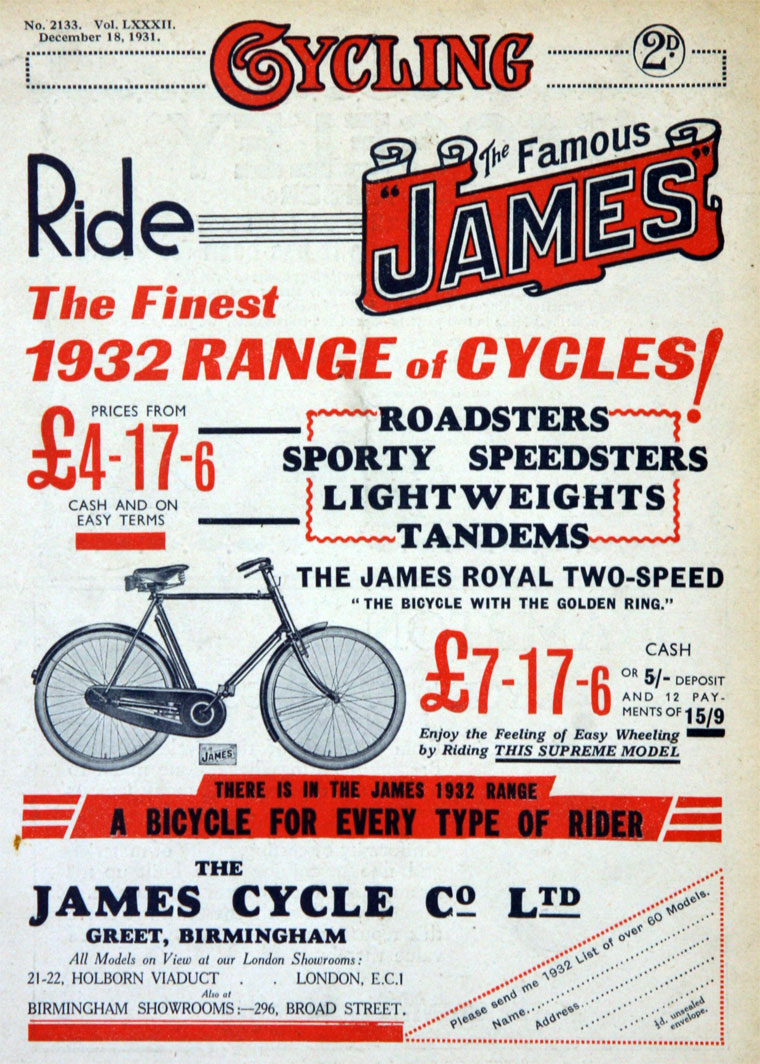 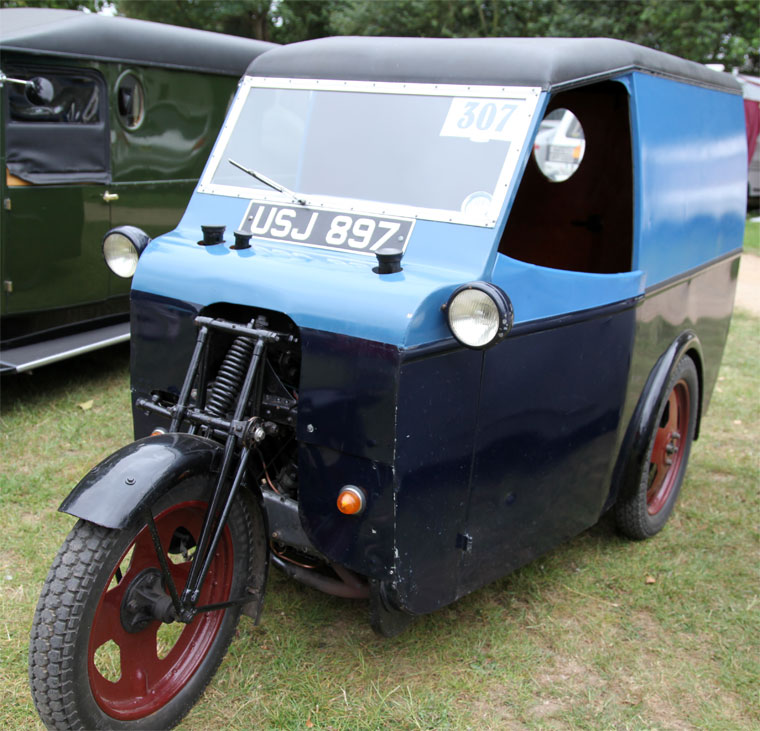 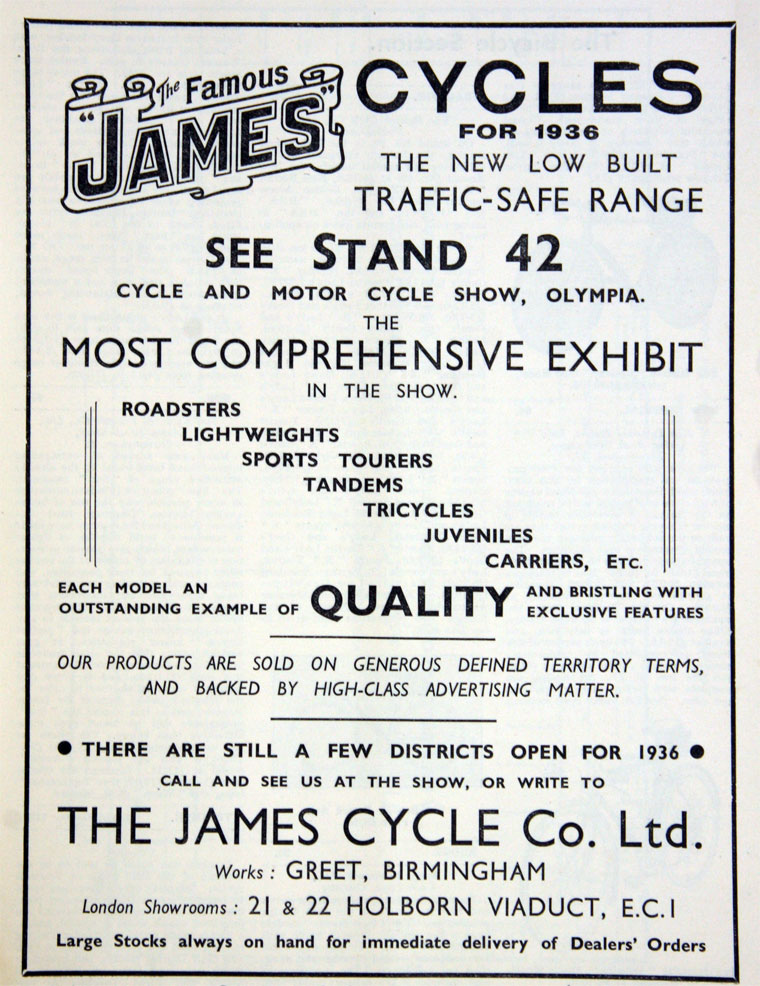 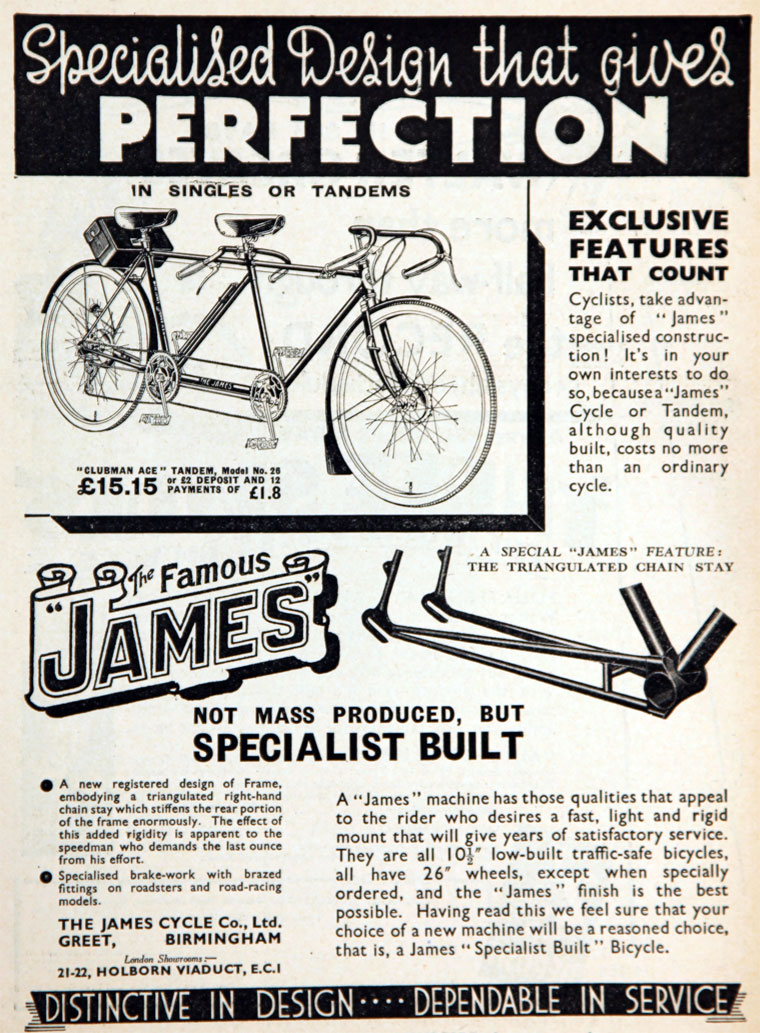 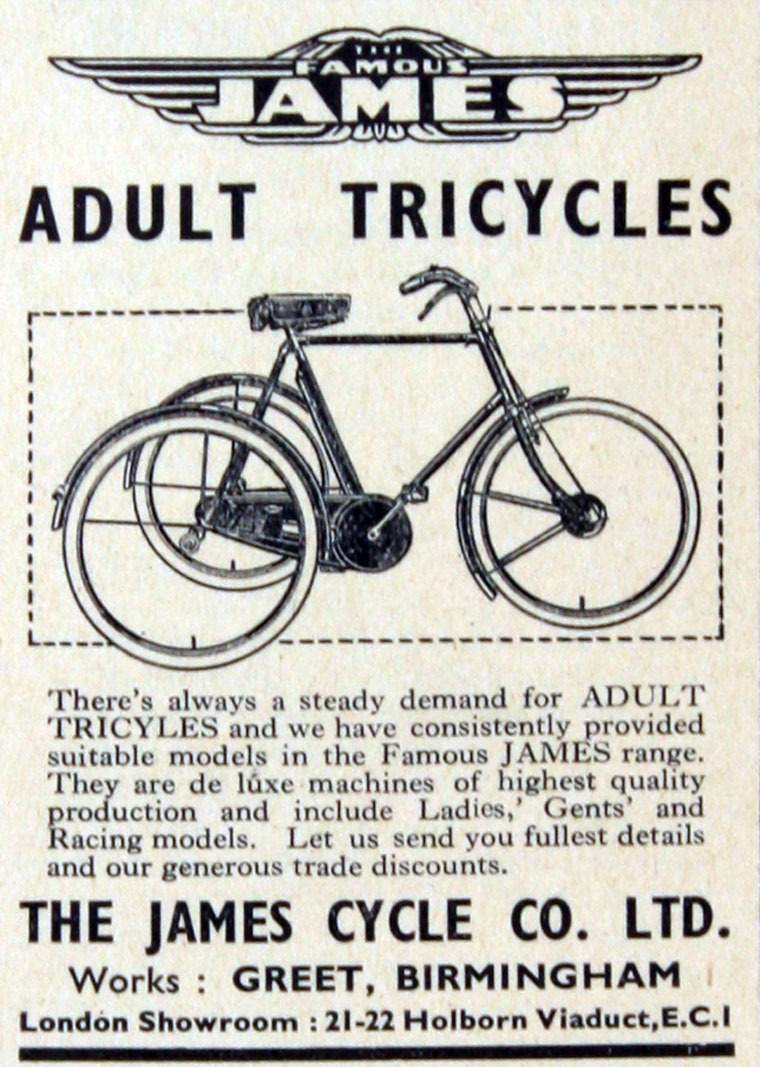 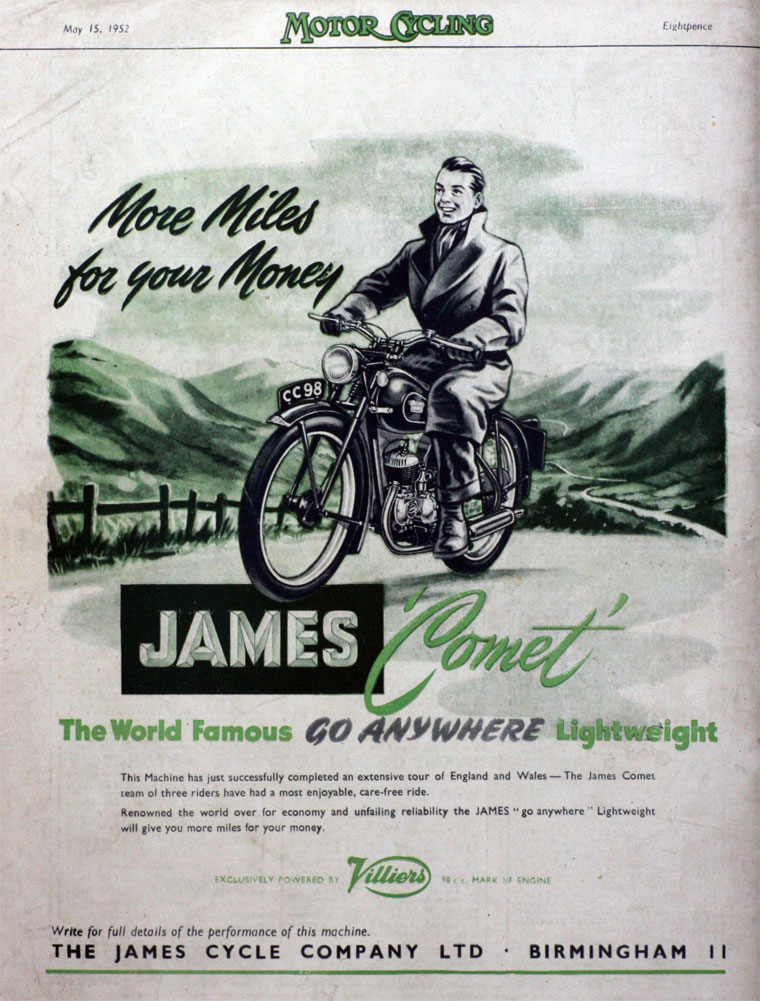 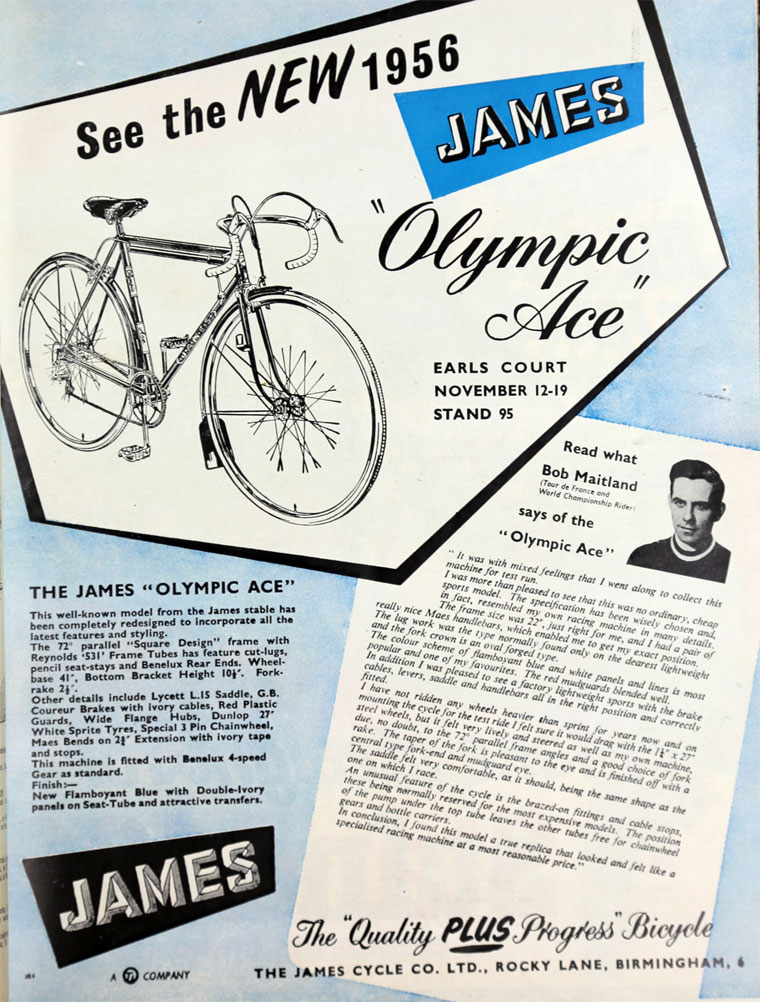 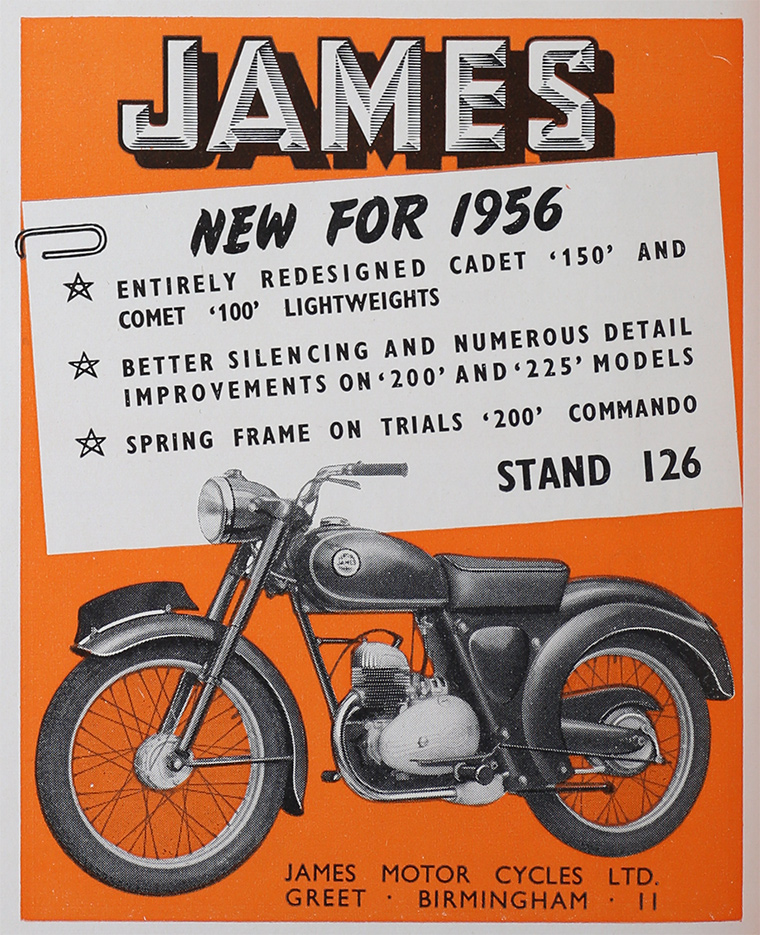 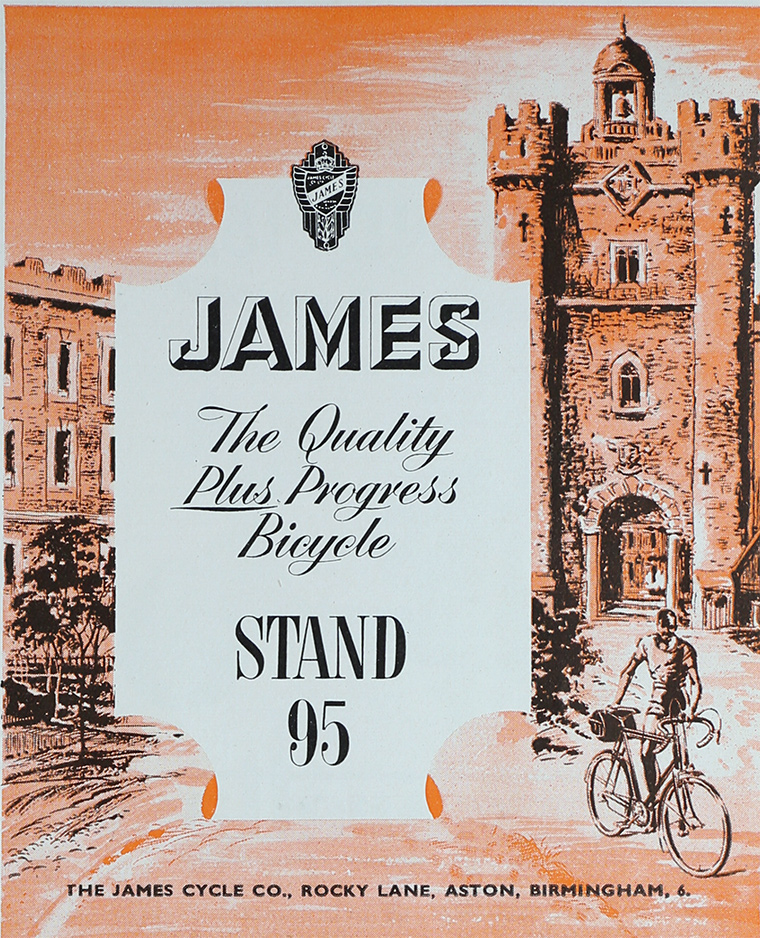 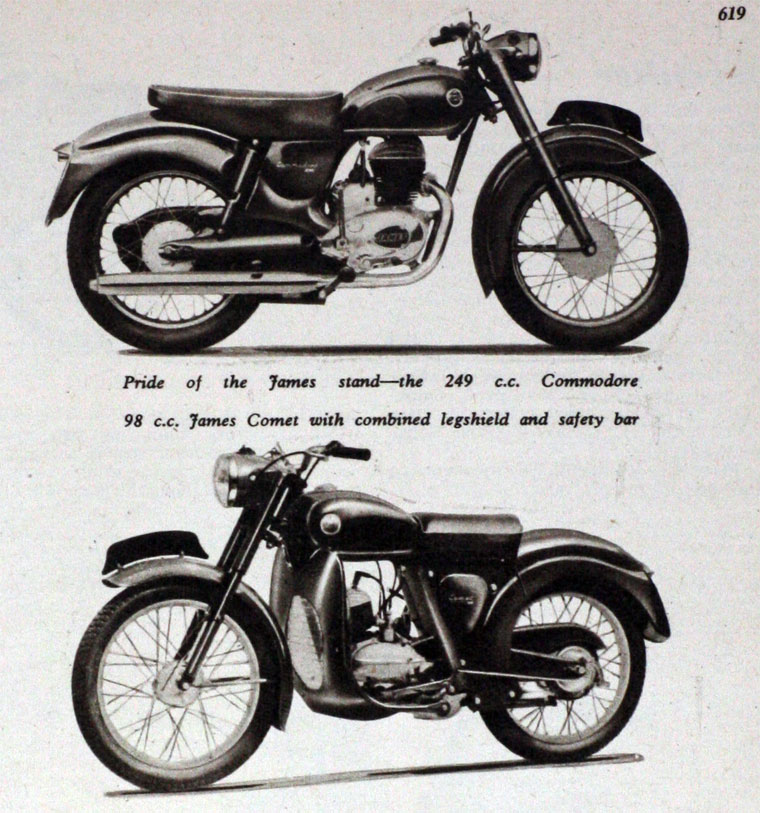 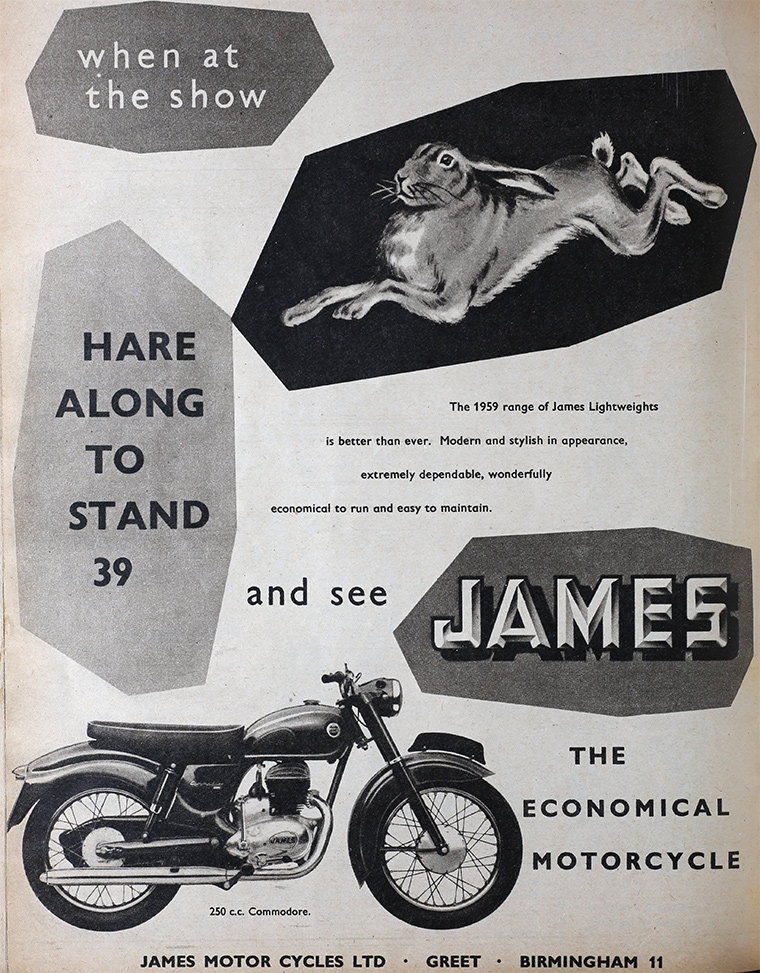 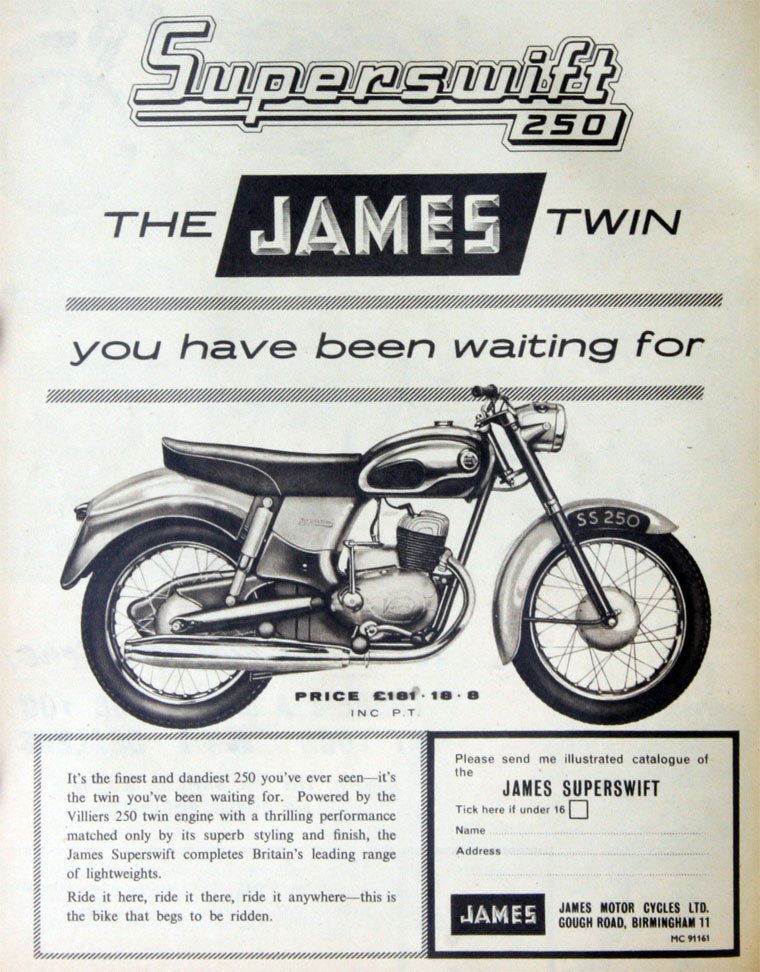 of Birmingham and London

1880 Henry William James started the business to build a Penny-Farthing bicycle in a small factory in Constitution Hill, Birmingham.

An early James bicycle is in the National Cycle Collection.

1897 The James Cycle Company was registered on 22 May, to take over the business of Henry William James[4]. Public company.

1902 The firm turned to power. A young engineer named Frank Kimberley was engaged; he remained with the company for more than fifty years; he was later to design the first James motorcycle. The first two motorcycles in the James range were primitive. designs

1903 Only the Minerva style motorcycle was listed, with 2hp and 2.5hp versions being offered. The Minerva engine hung from the down-tube and direct-belt drive.

1904 The design changed to a loop frame and an FN engine with a cast-iron crankcase.

The Derby had engine mounted within the frame, with a short chain-drive back to a spring loaded friction roller, in contact with the rear tyre. A lever allowed the drive roller to be lifted clear and both frame and forks were simple bicycles.

1909 Launch of a radical new design invented by P. L. Renouf. Known as the Safety model and advertised as the 'one-track car'. It had all the frame tubes to the left of the wheels, which ran on live axles, the front with hub-centre steering. Laminated springs provided the front suspension, while the saddle was supported by flat and coil springs. Both hubs had expanding metal-to-metal brakes, while the wheels were easy to remove and interchange. The petrol tank went in front of the headstock and acted as a front mudguard. Initially, the 523cc engine was inclined back to the headstock angle, but soon adopted a vertical position. It had variable lift of the inlet as a control, ball bearing for all shafts except the gudgeon pin, cylinder cooling-fins that were square in plan but alternately staggered around the casting, chain-driven rear-mounted magneto and a free-engine pulley design. Transmission was by belt, a handle was provided for starting, while foot-boards aided rider comfort.

1910 The machine was modified, the engine was enlarged to 558cc and adopted conventional sv and gear drive to the magneto. The front tank became the oil tank and toolbox, while the petrol tank fitted over the frame top-tube so it became a model with an early form of saddle tank.

1911 The front suspension was revised to parallel-link form and retained the hub-centre steering. Although that model remained available, more conventional machines were added to the range. They used the existing engine with a modified magneto drive in a diamond frame with simple forks and belt drive to produce two models called the Tourist and the TT.

1912 The British motorcyclist was, in those days, very conservative and did not readily take to the advanced designs, so the Safety model was dropped that year. They introduced a 3.5hp model with all-chain drive, two-speed gearbox, kick-starter and clutch, thus moving swiftly from unconventional to modern. Belt-driven machines continued to be listed.

1914 A sidecar model was introduced, with the engine enlarged to 598cc, as well as a small two-stroke, powered by their own 225cc engine, driving a two-speed gearbox by chain with belt final-drive and Druid forks. These three 'pineapple' models, with staggered cylinder fins, were produced for several years.

Post World War I. James continued to build a variety of motorcycles, many of which were redesigned and modified. In particular, there were two V-twins, one the original of 495cc and the other of 662cc, both with three speeds and all-chain drive.

1923 The two-stroke adopted chain final drive when the big single was reduced to 349cc and the same engine dimensions as the larger V-twin.

1928 The range of four-strokes had redesigned frames and saddle tanks, and was reduced to the 349cc single in sv or ohv form, the 550cc single and the 495cc V-twin. To this was added a lightweight with a 172cc Villiers engine.

1929 The big single was dropped, but the V-twin was joined by an ohv version with four speeds, which was also an option for the sv model. The ohv twin was also listed in speedway form, when it had a single gear.

1930 The V-twins reverted to three speeds, with four speeds as an option. The 249cc single returned and was joined by a 247cc Villiers-powered model. At the end of that year, James bought Baker Motor Cycles and started to use their frame design.

With the depression years came a move towards more utilitarian models and these were mainly powered by Villiers two-stroke engines. A Rudge-Whitworth engine was used in 1931, for one model, and for a while they claimed to be building some of the two-stroke engines themselves. The V-twins lasted until 1935, along with four-stroke singles in the three usual sizes. These were eventually outnumbered by a wide range of two-strokes.

1936-1940 Various models were produced and one in particular, a two-stroke with a 122cc engine, gave excellent service throughout the war. They then built the Military Lightweight specifically for the services, who named it the 'Clockwork Mouse'.

Post World War II. Only two models were built - the Superlux autocycle and the 122cc ML. This was a wartime model with the paint changed to maroon.

1949-1950 The range was revised and extended, all using Villiers engines. There were three road motorcycles, called the Comet, the Cadet and the Captain, plus two for competition. All had girder forks, but this changed in 1950 when the firm adopted Dunlop telescopic forks using rubber cushions as springs. The only exception was the autocycle. Plunger rear suspension became an option for the Captain.

1951 The firm became part of the AMC group. The Comet had engine enclosure and became the Commodore.

1952 to 1956 The 197cc competition model became the Colonel in 1952 . The style was set for the next few years as the range moved on to mechanical-spring telescopic forks and a road Colonel which, together with the Captain, had a pivoted-fork frame.

1954 Tube Investments purchased the name and goodwill of the James pedal cycle business from AMC. Production of cycles would continue at TI's Hercules factory. Production of motorcycle continued at Greet, Birmingham[5]

1956 James cycles was one of Tube Investments brands at this time[6].

1957 Various models used the AMC 249cc two-stroke engine; also used by Francis-Barnett which was part of the same group. Unfortunately, those engines proved to be troublesome and very unreliable in comparison with the Villiers.

1958 The trend had been set and the company continued to use the AMC engine, although the Comet still used the Villiers. The Cadet and the Captain continued. These were then joined by the Cavalier.

1959 In came the Flying Cadet, trials Commander and scrambles Cotswold, all with AMC engines.

1960 The Captain turned to the 199cc AMC engine, so only the Comet was left with the Villiers. The James scooter was added to the range, using a variant of the 149cc AMC engine. It was typical in style, with enclosure and leading-link forks.

1961 Manufacturers of the James 2-stroke motor cycles and general engineers.

1961-1962 Some models used the Villiers engine for competition versions. New models were the Sports Captain in 1961, and the Superswift in 1962.

1963 The Sports Superswift appeared when the competition models returned to 246cc Villiers engines, the 32A for trials and the 36A with a Parkinson top-end conversion for scrambles. All models had been fitted with Norton forks and a new model that was actually a carbon copy of the Francis-Barnett Plover appeared - the only difference was the badges and the colour finish.

1966 Problems within the group brought production of these illustrious machines to an end and they disappeared altogether when AMC folded.

Harry James' brother, John Thomas James (1861-1902), founded the Birmingham Rim Works, in Loveday Street, Birmingham. He manufactured cycle and motor cycle rims for tyres and after his death in 1902, Harry probably ran his firm which was re-named James H. and Co. (Rims).