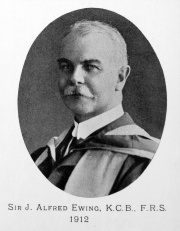 Born at Dundee on March 27, 1855, he was educated at the High School in that city, whence he obtained the first engineering scholarship to Edinburgh University. At that time Fleeming Jenkin was working there with Kelvin on submarine telegraphy, and he suggested that Ewing should take part in this work during the vacations; after graduating, he made three voyages on cable-laying ships to Brazil and the River Plate.

In 1878, on his chief's nomination, he was appointed Professor of Mechanical Engineering at Tokyo University; during his five years' stay in Japan, he took the opportunity to study seismology; he designed instruments by which the exact measurement of earthquake motion was made practicable, and these were installed in an observatory which he established in Tokyo. He also began researches which later gave birth to the molecular theory of magnetism, this accounting for the phenomenon to which he gave the name hysteresis.

In 1883 he returned to Britain and became Professor of Engineering at University College, Dundee; seven years later he followed James Stuart, the first occupant, in the Chair of Mechanism and Applied Mechanics at Cambridge. After his appointment, on the advice of John Hopkinson, considerable developments took place; a laboratory was acquired, the general principles for the education of engineers were laid down, and a Tripos was established - all this was due in no small measure to Ewing's energy.

While at Cambridge, Ewing continued his magnetic researches, paying special attention to the practical testing of the magnetic properties of iron; the results were published in a paper presented before the Institution of Civil Engineers in 1896. He also devised a magnetic curve tracer, a hysteresis tester, and a permeability bridge, while in another field he investigated the crystalline structure of metals and determined how an aggregate of crystals can exhibit plasticity through the slipping processes that occur between atomic layers.

In 1903, his connection with Cambridge was interrupted, and was not resumed for some years; when the Admiralty decided to introduce a new Scheme of Naval Education, he was first called upon to advise how best to include a large element of engineering knowledge in the training of every officer, and then was appointed Director of Naval Education. While at the Admiralty he was a Member of the Explosives Committee and of the Ordnance Research Board. At the beginning of the Great War, he was invited to assist in the de-coding of enemy ciphers, cryptograms being a subject in which he had long been interested as an amateur; as a result, a new department, known as Room 40, was set up.

In 1917, Sir Alfred was appointed Principal and Vice-Chancellor of the University of Edinburgh, but he continued his association with Room 40 for another year. At the end of the war, problems of University reconstruction arose, and he showed himself to be an able administrator, with resource, bold leadership and sound business capacity. During his tenure of office, thirteen new chairs were established, many new buildings were erected, and the whole institution was reorganised on modern lines.

He resigned his Vice-Chancellorship in 1929 and retired to Cambridge, where he was elected an Honorary Fellow of King's College. While he was at Edinburgh, the Bridge Stress Committee was appointed by the Department of Scientific and Industrial Research, in March 1923, of which body he was Chairman; the work of this Committee, which consisted of the experimental determination of the static and dynamic deflections of every ordinary type of bridge and of the stresses in individual members, lasted for five years, and showed the effect on the oscillation of bridges of two factors - the hammer blows of the unbalanced parts and the frictioned resistance of the spring gear of the locomotives - which had previously not been taken fully into account.

At Cambridge, Sir Alfred voluntarily devoted some of his time to other activities of the Department of Scientific and Industrial Research. As a member of the Food Investigation Board he was interested in the work of the Low-Temperature Research Station in that town, and he supervised researches at the National Physical Laboratory on thermal insulation, refrigerants and the measurement of humidity - a subject to which he had earlier paid much attention. He was also a member of the Committee on the Mechanical Testing of Timber, appointed by the Department in 1929.

Sir Alfred was the author of many papers on scientific subjects, particularly magnetism and the physics of metals. His treatise on "The steam engine and other heat engines," published in 1894, has become a classic, and has been translated into many languages. His other works include books on "The strength of materials," on "The mechanical production of cold" and on "Thermo-dynamics for engineers."

Sir Alfred was naturally the recipient of many honours. He was made a Companion. of the Bath in 1907, and became Knight Commander of the same Order four years later, He -was elected a Fellow of the Royal Society in 1887, and received the Royal Medal for his researches on magnetism in 1895. He held honorary degrees in the Universities of Oxford, Cambridge, Durham and St. Andrews, and was elected an Honorary Member of the Institution of Civil Engineers in 1929, in which year also he received the Albert Medal of the Royal Society of Arts. He was a Past-President of the Royal Society of Edinburgh, and was awarded the freedom of that city and of his native town of Dundee.

His membership of the Iron and Steel Institute dated from 1899.