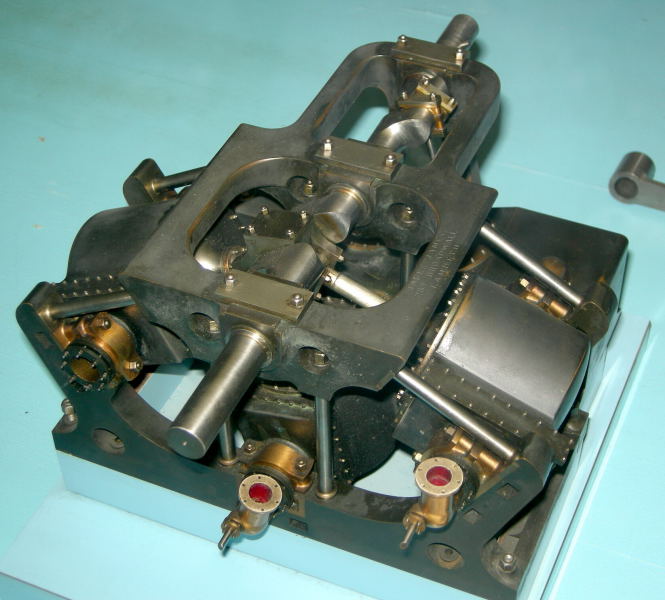 1858 model, made by Jabez James, of J. Scott Russell's 3-cylinder oscillating marine engine. This was on display at the London Science Museum in 2010 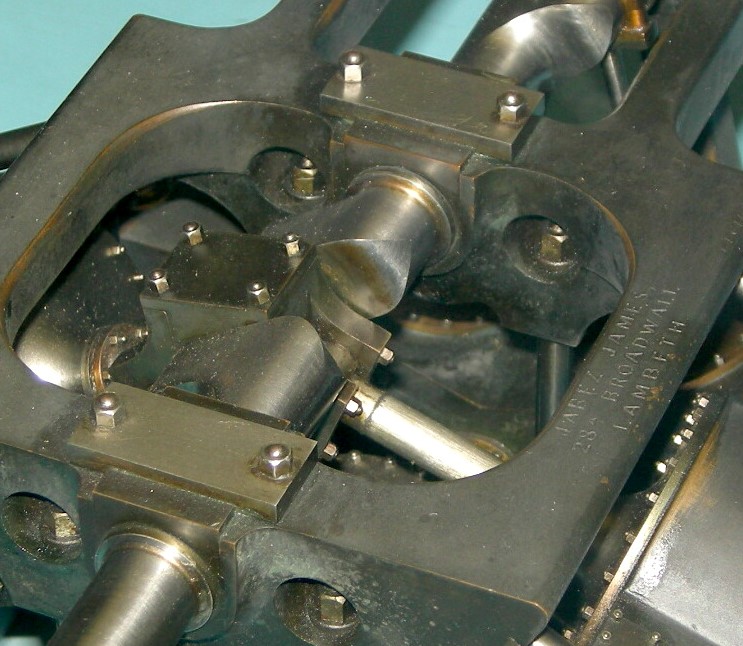 Closer view, showing the fine workmanship. The left hand cylinder's piston rod carries the master big end to which the other piston rods are connected

He served an apprenticeship of seven years (1826-33) to his father, who was a smith and bell-hanger by trade; and as his own support as well as that of the family had in a great measure to depend on his earnings, he had few opportunities of obtaining an education such as he often felt the want of in after-life.

He soon distinguished himself as a clever and intelligent workman, and readily obtained good employment for four years as a journeyman to Mr. R. Miller, to whose business, that of a locksmith and bell-hanger, he succeeded in 1837. As he had great skill in all operations of a delicate and accurate kind, he was soon largely engaged in artistic metal-work and in model-making.

His model of the Britannia Tubular Bridge, which was shown at the Great Exhibition of 1851, was described in the Jurors’ Reports as 'the perfection of the art of modelling,' and obtained for Mr. James a Prize Medal. On the same occasion his elaborate and beautiful model of the wrought iron bar-chain Suspension-bridge at Kieff, then in course of construction from the designs of the late Mr. C. B. Vignoles, Past-President Inst. C.E., for H. I. M. the Emperor of Russia, attracted great attention among engineers, every detail being executed exactly to scale. These two models were destroyed by the fire at the Crystal Palace; but of the Kieff bridge a duplicate had been made, and is believed to be in the Winter Palace at St. Petersburg, . . . [more]

After serving a seven years' apprenticeship, from 1826 to 1833, to his father, who was a smith and bell-hanger, he worked four years as journeyman to Mr. R. Miller, a locksmith and bell-hanger, to whose business he succeeded in 1837, and soon became largely engaged in artistic metal-work and model-making. Among his finest models was that of the Britannia Tubular Bridge, which obtained a prize medal at the Great Exhibition of 1851; also that of the Kieff Suspension Bridge, and that of the paddle-wheel engines of the "Great Eastern" steam-ship. He constructed portions of the metal-work for the Clock Tower and Palace at Westminster, and for several other public buildings; and was also engaged in raising and hanging the bells in the Clock Tower, and in repairing the structure of several cathedrals.

While so occupied he established a factory in Lambeth, where, in addition to engines and other machines, he constructed machinery of special descriptions for the Bank of England, the Mint, and other government establishments, as well as for many private firms.

For the manufacture of small-arms he devised and made the very exact gauges and machines required; and also apparatus for the manufacture of gunpowder. He constructed machinery for printing, stamping, and file-cutting, and for making screws and tin boxes; also air-engines and refrigerating apparatus, and many other kinds of machinery.

Having in 1875 met with a serious accident, which rendered him almost a cripple and was followed by frequent attacks of illness, he died on 9th January 1883, in his seventy-third year. To the very last he was occupied in bringing out apparatus for electrically lighting railway carriages.

He became a Member of the Institution in 1856.