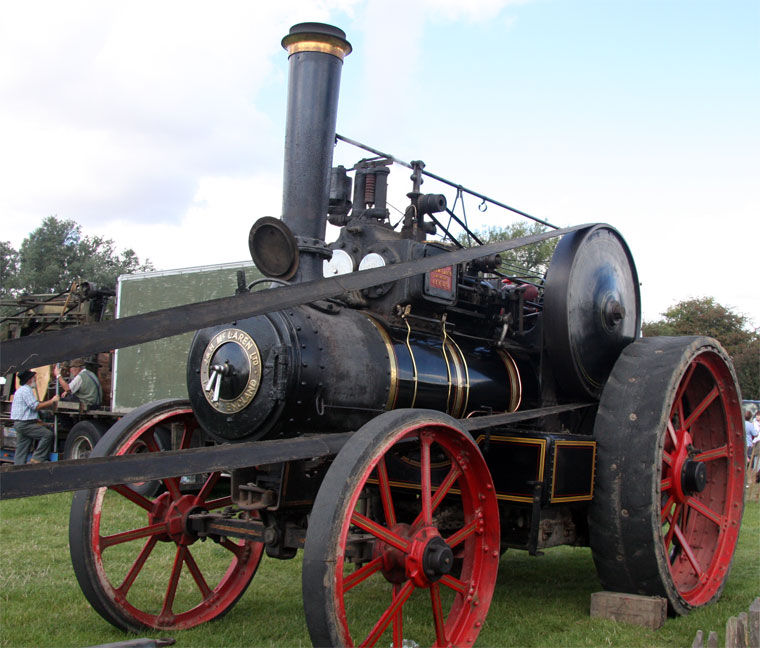 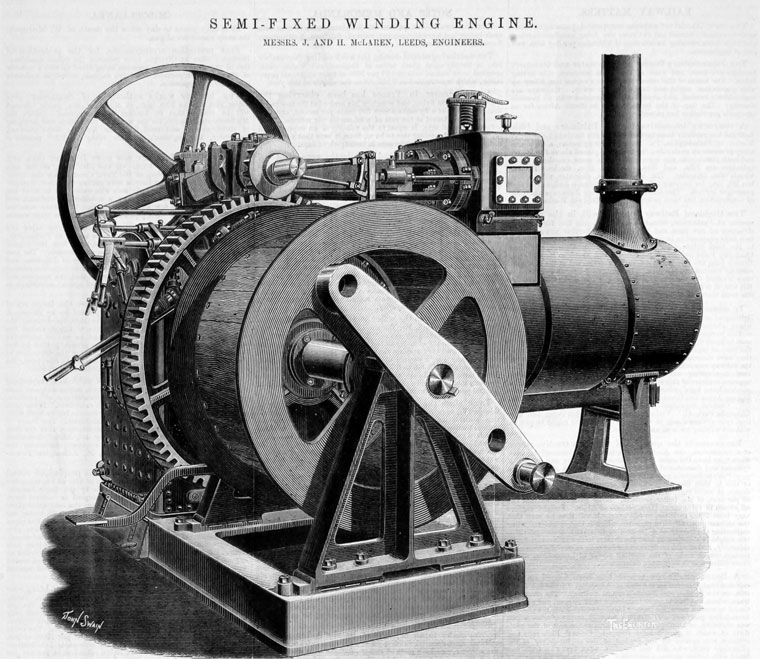 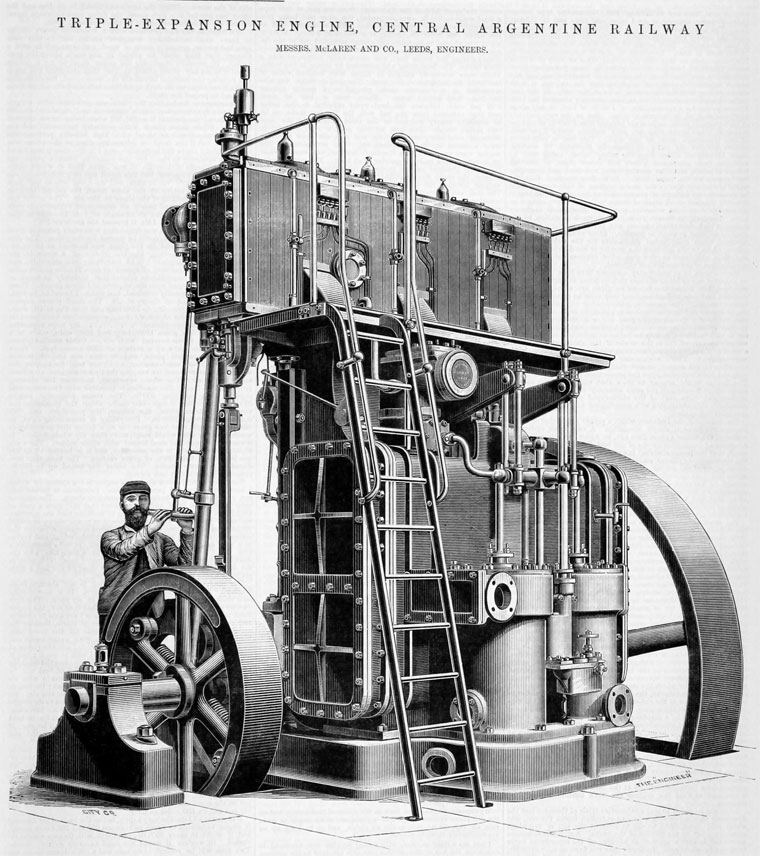 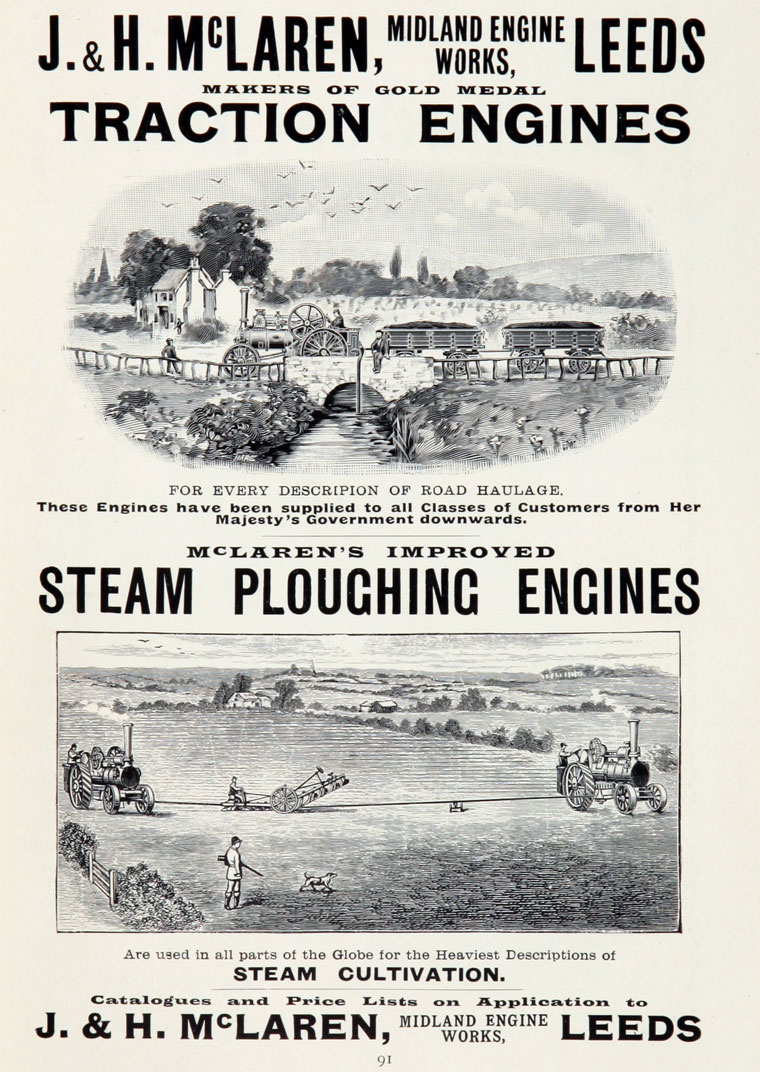 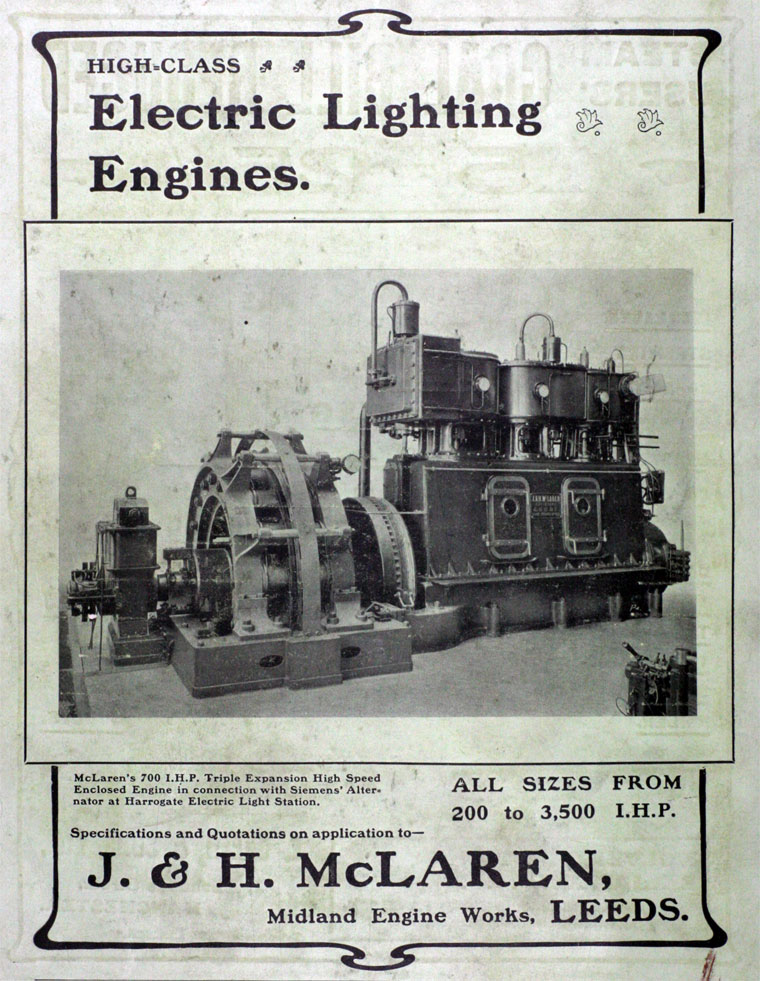 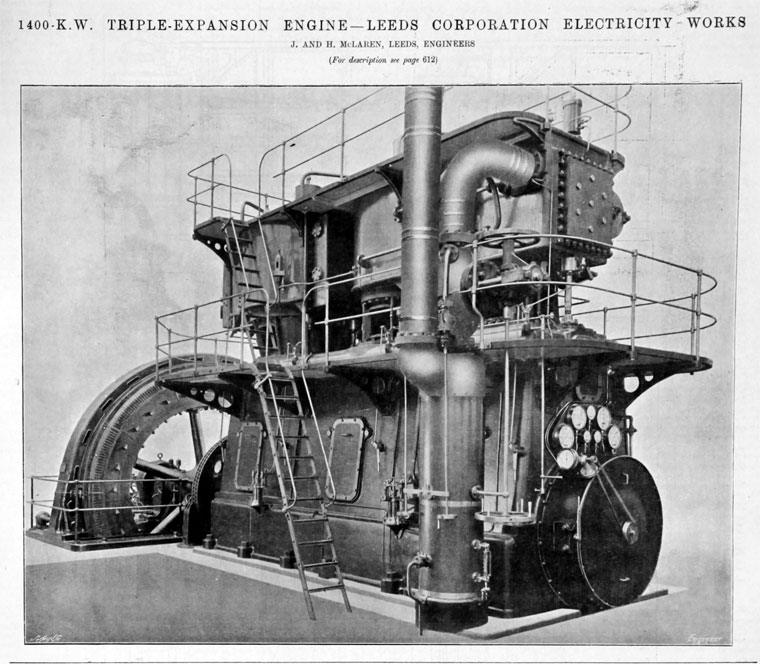 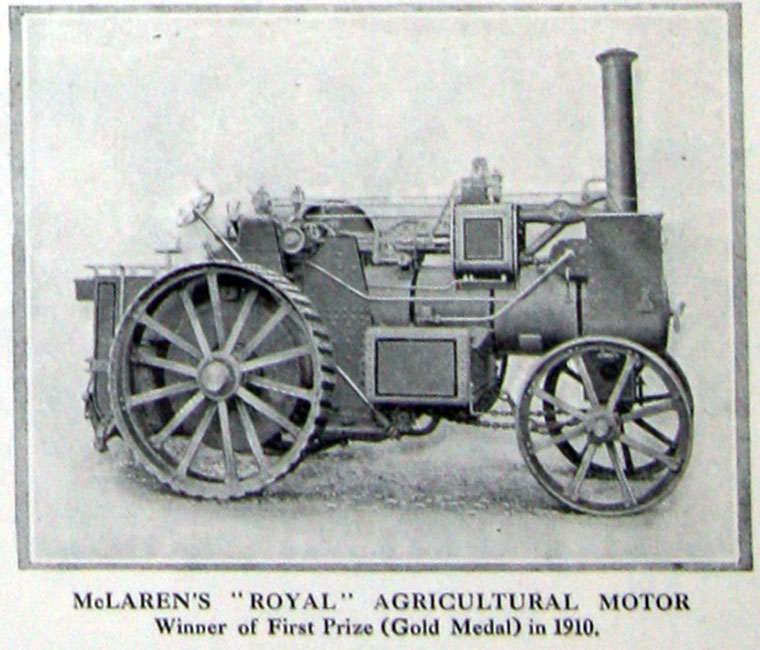 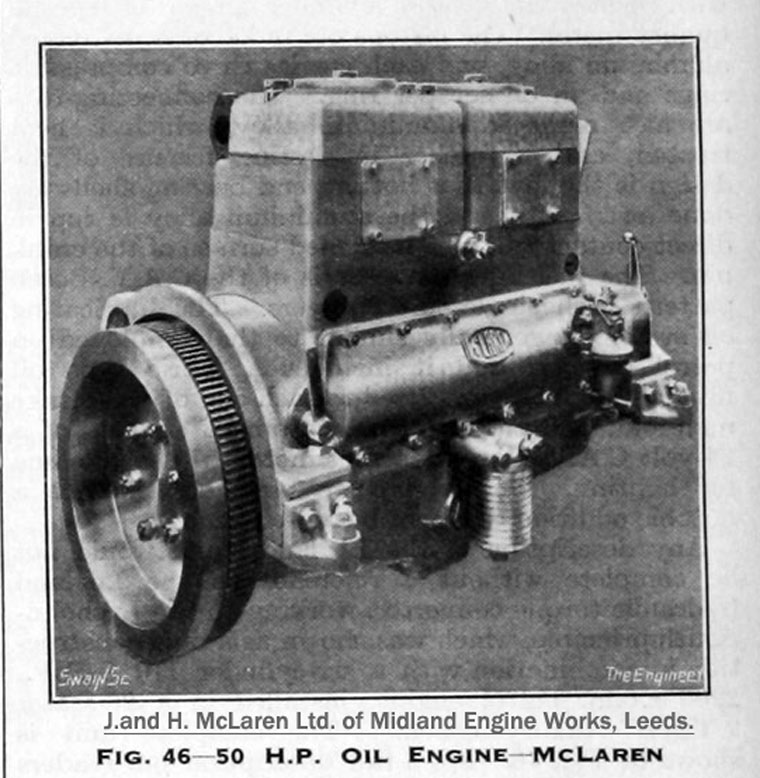 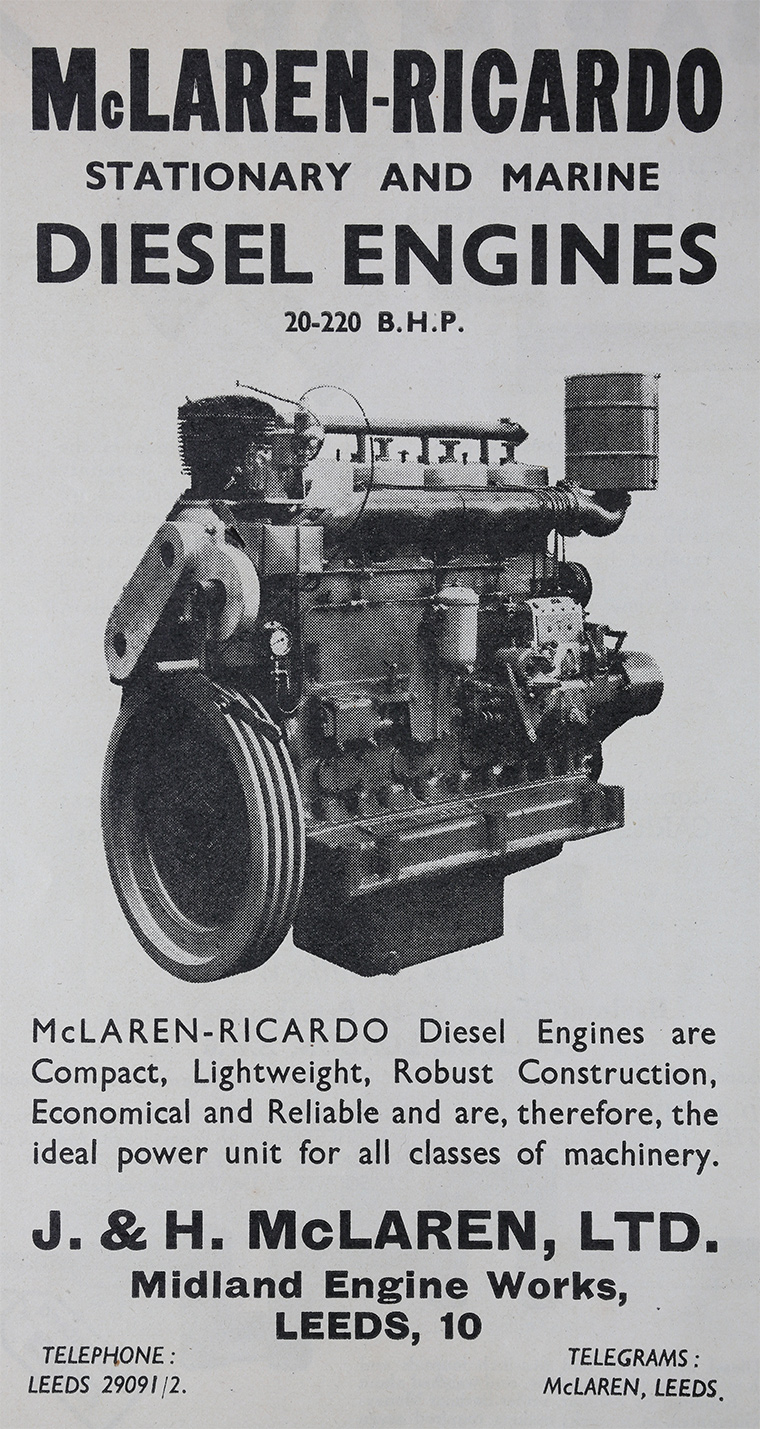 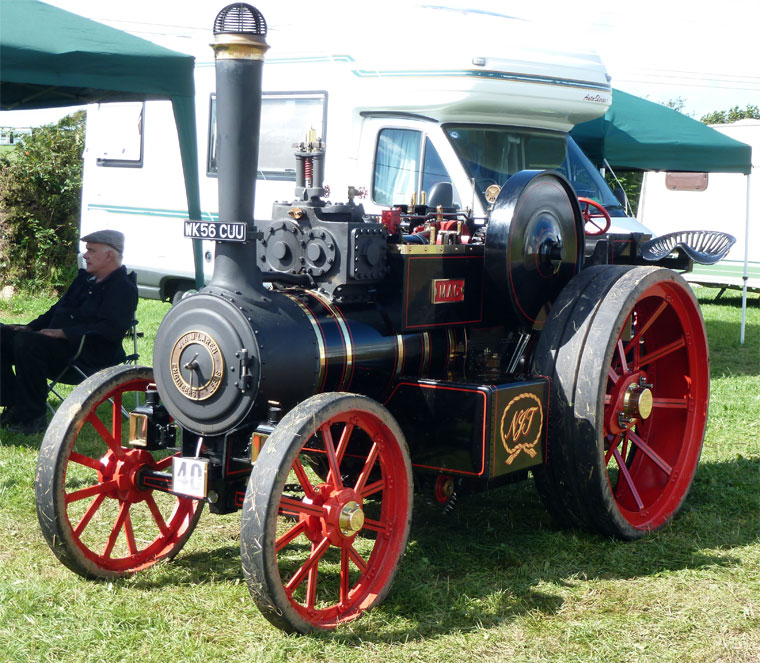 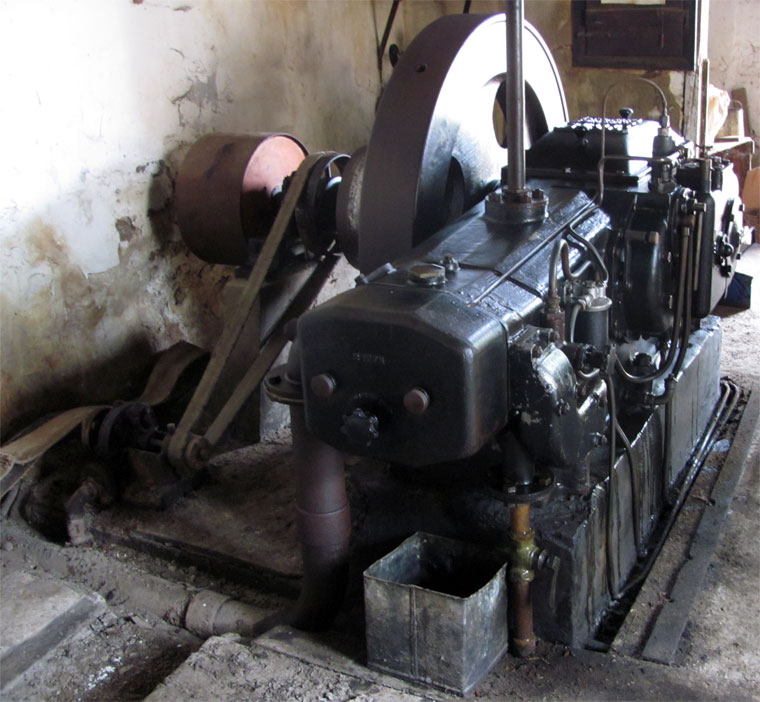 Brothers John McLaren (born 1850) and Henry McLaren (born 1854) of Hylton castle in Sunderland were apprentices at Black, Hawthorn and Co of Gateshead, builders of railway locomotive and marine engines.

1876 The company was founded by the brothers. Their new Midland Engine Works was situated on Jack Lane in Hunslet, Leeds on part of the site of E. B. Wilson and Co and within sight of many of the great engineering companies of Leeds

1877 First traction engine built, a duplex cylinder rated at 12nhp and bought by Bell and Co of Arbroath.

The company rapidly developed a range of traction engines, road rollers, ploughing engines, agricultural implements and stationary engines. One of their forgotten achievements is the invention (see British Patent 763 of 1880) of the traction-centre engine, for driving steam-powered fairground roundabouts. This is often wrongly attributed to Savage of Kings Lynn.

1889 Showed compound semi-fixed engine at the RASE at Windsor. [2]

1890 A branch was established in Christchurch, New Zealand

1891 McLarens developed a range of vertical triple-expansion engines for the new industry of electricity generation.

After the turn of the century the company introduced a tractor for direct haulage and a range of powerful direct ploughing engines. The largest of these, rated 125 i.h.p, was fitted with super-heater, feed-water heater and fully lagged cylinders. This provided a very efficient engine, which won many awards both at home and abroad. Other minor products were showman's engines, crane engines, portable engines, railway locomotives and Darby Diggers.

1903/4 The zenith of their efforts in electricity generation was a pair of 3000 i.h.p. engines for Leeds Corporation’s Whitehall Road Power Station - see pictures.

McLarens had a good overseas market with over 50% of goods exported. They had local offices in New Zealand, Australia, South Africa, and South America with smaller representation in Hungary, Germany and Italy. The last of the traction engines was exported to South Africa in 1938 and is preserved in Johannesburg.

1915 Built a railway locomotive for Hall and Company, Croydon.

WW1 During the First World War, McLarens inevitably became involved in the war effort. The works were particularly noted for producing a collet chuck for holding shells during turning. For his efforts during the war, John McLaren was knighted, but unfortunately his reward was short lived, for he died in 1920.

After the First World War, McLarens built a cable-ploughing windlass, initially powered by a Dorman petrol engine but a diesel engine was sought.

1920 Produced a motor driven windlass for ploughing and fitted with a Dorman engine rated at 40 hp. [5]

1926 The company entered into an agreement with the German company Benz to manufacture diesel engines. These were the first automotive type diesel engines produced in volume in Britain and, as a result, were in the forefront of the use of diesel engines for road, rail, and agricultural purposes. Examples include the first diesel-powered railway locomotive, built by Hudswell, Clarke and Co in Leeds and powered by a McLaren built diesel.

1928 The first diesel-powered commercial vehicles in Britain were made by Richard Garrett and Sons of Leiston, and Kerr, Stuart and Co of Stoke-on-Trent, powered by McLaren built diesels. A complete range of diesel engines was designed up to around 400 h.p. and these were very widely used for industrial applications, one particularly successful use was in standby power sets.

1943 The business was sold by the family to the Associated British Engineering company and this was initially very successful. A major contract with the USSR for diesel-generator sets resulted in the number of employees increasing tenfold and new buildings acquired.

1944 Producing a wide range of diesel engines for the railways.

December 1945, McLaren took over the remains of Kitson and Co and with it their Airedale Works. Unfortunately these glory years did not last.

1947 The assets of two wholly-owned subsidiaries of Associated British Engineering, Mirrlees, Bickerton and Day and J. and H. McLaren, were transferred to Brush in exchange for shares[6] (transaction completed in 1949).

1957 The take-over of the Brush A.B.O.E. Group by Hawker Siddeley saw the Leeds production facility fade away and the main works closed in January 1959.