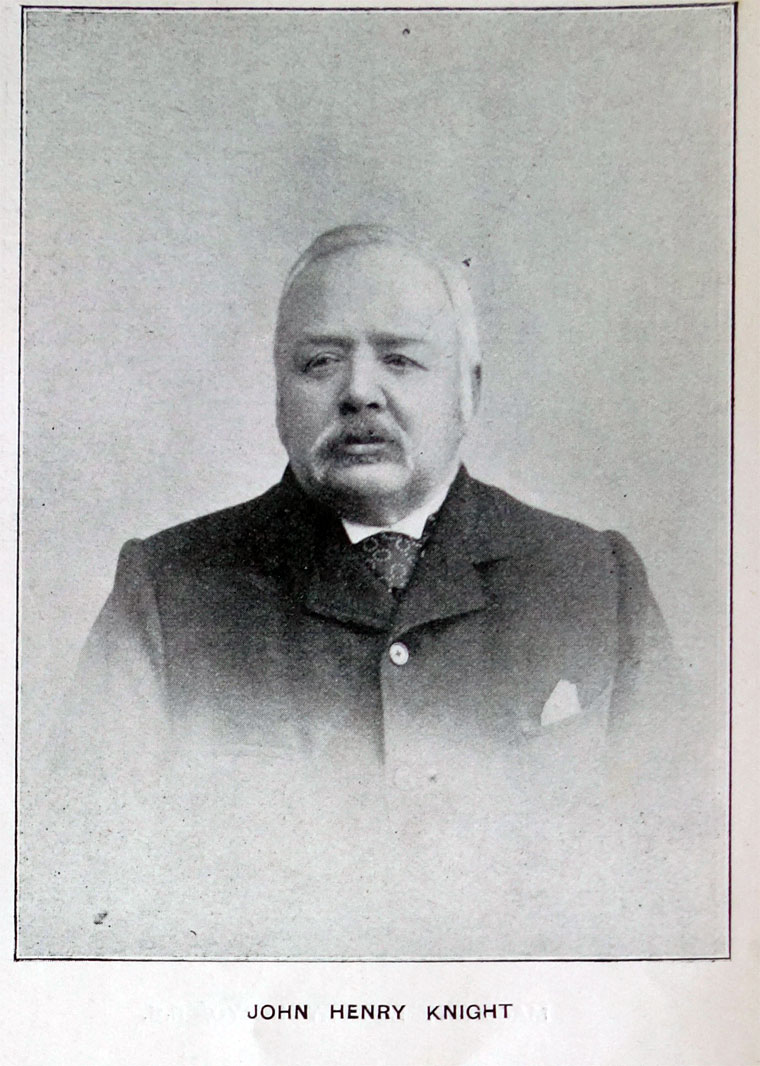 John Henry Knight (1847-1917) of Barfield, Farnham, Surrey drove his car on a public road in 1895 and was booked and fined by Surrey County Council for travelling at 9 mph, a speed in excess of the country road limit of 4 mph. In towns the limit was 2 mph.

1847 Born the son of John Knight of Weybourne House, Farnham.

1851 Living at Weybourne (age 4 born Farnham) and with his parents John (age 54 born Farnham), a Banker, and Mary and his brother George Will. Seven servants. [1]

1861 Living at Weybourne (age 14 born Farnham) with his widow mother and brother Coldham. Also a visitor and four servants. [2]

1871 Living at Farnham (age 24 born Surrey), a Landowner. With his widow mother Mary and brother Coldham. Plus six servants. [3]

1895 Jun 08. Mechanical Carriages. (Letters to the Editor) The Times. Tells of visit to Panhard-Levassor in Paris and promotes the use of cars in England. [6]

1895 Jun 21. Mechanical Carriages. (Letters to the Editor) The Times

1895 A test case by John Henry Knight was brought to court in 1895. On 17 October 1895 Knight’s assistant, James Pullinger, was stopped in Castle Street, Farnham, by the Superintendent of Police and a crowd had gathered by the time Knight arrived. The Superintendent asked whether it was a steam engine, Knight replied that it was not and thus admitted liability. He and Pullinger were charged with using a locomotive without a licence. The case was heard at 'Farnham Petty Sessions' held at Farnham Town Hall on 31 October 1895. Knight and Pullinger were both fined half a crown 2s 6d (or possibly 5 shillings) plus 10 shillings costs (or possibly 12s 6d).

This car was constructed by John Knight and had an engine of 3.5 ins diameter and 4.5 ins stroke. It had a low speed of 3.5 mph and a top speed of 9 mph. It eventually ran about 150 miles on public roads until stopped by Surrey County Council. [7]

1904 'KNIGHT, John Henry, of Barfield, Farnham. Car: Benz. In 1868 commenced to build a steam carriage. In 1895 made a light petrol carriage for two passengers, and ran it for some months in the neighbourhood of Farnham.'[12]

1917. Obituary. Died aged 70 years. Educated as an engineer. In 1868 he constructed a steam carriage which ran for two or three years in the neighbourhood of Farnham. After experiments he produced the 'Trusty' oil engine. In 1884 he married Elizabeth Bligh the daughter of Captain Edward Foley R.N. [14]

KNIGHT, JOHN HENRY.- Born in 1847, and serving his apprenticeship with a Deptford firm of engineers, Mr. John Henry Knight may well be looked upon as one of the pioneers of British motor construction. His first steam carriage with Field boiler was constructed in 1868, his first light petroleum car in 1895. For driving the latter on the highway without the man with the red flag in front he had the distinction of being prosecuted by the Surrey County Council. This car was also run at the Crystal Palace Motor Car Show in May, 1896, then the only English-made automobile in the grounds. He is the patentee of the Trusty oil engine, which has had a very extended use. He now drives a Benz car. Amongst his pursuits and amusements outside automobilism are machine construction and photography; in the latter, the most recent developments in colour photography claiming his immediate attention.

Mr. J. H. Knight, of Weybourne House, Famham, had a little steam carriage made in 1868; it was capable of carrying three passengers at a speed of 8 miles an hour on good roads, while it easily mounted the hills in the neighbourhood of Farnham. The carriage was propelled by two cylinders, each 5 in. diameter and 12 in. stroke, the power being transmitted from the crank shaft to the driving axle by chain gearing, the ratio of which was four to one. The vehicle was mounted on four wheels; the two driving wheels were 4 ft. diameter. The leading wheels 2 ft. 8 in. diameter. The carriage was supplied with a brake, a donkey pump, and a feed water heater.

John Henry Knight (21 January 1847 – 22 September 1917), from Farnham, was a wealthy engineer, landowner and inventor. With the help of the engineer George Parfitt, he built Britain’s first petrol-powered motor vehicle.

On 17 October 1895, with his assistant James Pullinger, they drove through Farnham, Surrey, whereupon he was prosecuted for using a locomotive with neither a licence nor a man walking in front with a red flag. This is sometimes misreported as the first person to be convicted of speeding in the UK, but that soubriquet subsequently fell to Walter Arnold of East Peckham, Kent, in January 1896.

Knight was both an inventor and pioneer, having created a (failed) steam powered road vehicle; a renowned steam powered hop digger; a heat saving radiator; a brick laying machine; a grenade thrower, a speedometer, wooden vehicle tyres, and a patent 'dish lever' for tilting plates when carving meat.

Knight was a founder member of the Automobile Association and politically active in the repeal of the Red Flag Act, he was also a pioneer of colour photography, plus writing various factual and practical books.

John Henry Knight was born in 1847 to John Knight, a banker and brewer of Farnham, who died in 1856 when John Henry was 9 years old. His mother was Mary Knight. His father's will bequeathed him title to, among other things, 'The Anchor Inn, Normandy' when he was 21 years old. He was born and raised at Weybourne House, Weybourne, Farnham, Surrey, which still stands today.

He then moved to Barfield in Runfold, just outside Farnham, which is now a Preparatory school.

He was inspired by The Great Exhibition of 1851 and went on to train as an engineer, developing an early enthusiasm for steam powered road-going transport. He owned an engineering works on West Street, Farnham.

In 1895 Knight built Britain’s first petrol-powered motor vehicle, a three-wheeled, two-seater contraption with a top speed of 8 mph. It was "The first petroleum carriage for two people made in England" and believed to be the fourth British vehicle to be built plus the 'first petrol driven vehicle ever to be driven on British roads'. Known as the Trusty, it had a single cylinder Trusty 1,565cc engine.

Sources such as British Local History state that :

'The car was designed very much as an experiment in order to attract Police attention and therefore create public awareness of the many restrictions which prevented the use of motor carriages in Britain at that time. Knight managed to use the vehicle for some 150 miles on public roads, before being stopped by the Police.'

On 17 October 1895 Knight’s assistant, James Pullinger, was stopped in Castle Street, Farnham, by the Superintendent of Police and a crowd had gathered by the time Knight arrived. The Superintendent asked whether it was a steam engine, Knight replied that it was not and thus admitted liability. He and Pullinger were charged with using a locomotive without a licence.

The case was heard at 'Farnham Petty Sessions' held at Farnham Town Hall on 31 October 1895. Knight and Pullinger were both fined half a crown 2s 6d (or possibly 5 shillings) plus 10 shillings costs (or possibly 12s 6d). Knight was restricted to using the car only on farm roads until the Locomotive Act was replaced by the Locomotives on the Highway Act, on 14 November 1896.

Knight's vehicle was said to be "almost silent" when it was running; the vehicle entered a limited production run in 1896 and shortly after that the tricycle was the only British car at the 1896 Horseless Carriage display at Crystal Palace, although the design was later changed in favour of a four wheel version. The car is currently on display at the National Motor Museum.

Knight was a founder member of the Automobile Club of Great Britain, so the members first ever 'club run' was hosted at his Barfield home.

Although best remembered for his car and his driving, he had, for many years, been an inventor and a designer of steam-powered machines, which he used for agricultural work and early road transport.

In 1868 he built a steam powered road vehicle, although it was not a practical proposition due to inefficiency.

In 1872 Knight developed a steam powered Hops digging machine. A rival designer, Frank Proctor, stated in an 1890 edition of the weekly magazine "Engineering" that "Mr Knight has undoubtedly earned the distinction of being one of the early pioneers in the system of steam digging". He had begun developing his first digging machine in 1872, specifically for working in hop fields, which are difficult to cultivate due to the incidence of the hop poles which support the strings up which the plants climb.

His other inventions included -

He was a keen photographer and pioneer of early colour photography, photographing Farnham and the surrounding countryside in the early years of the 20th century.