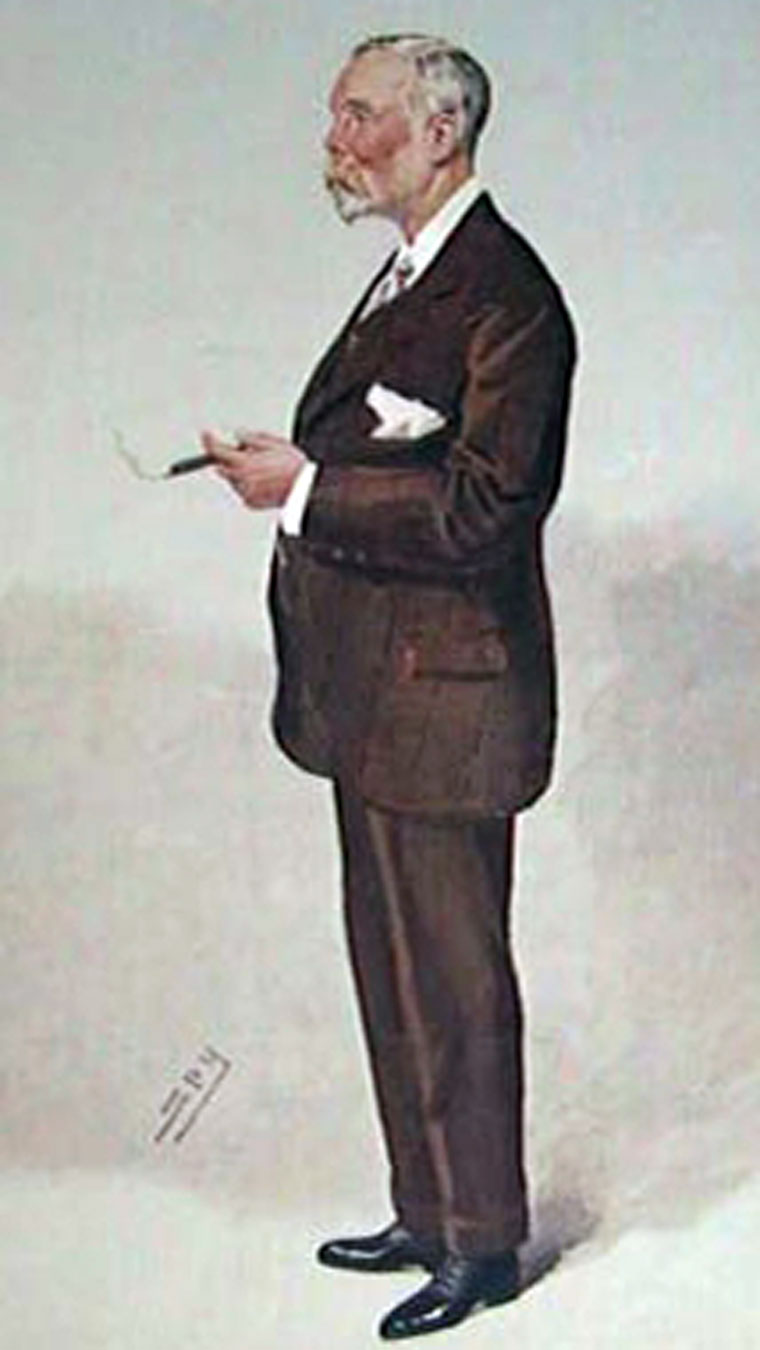 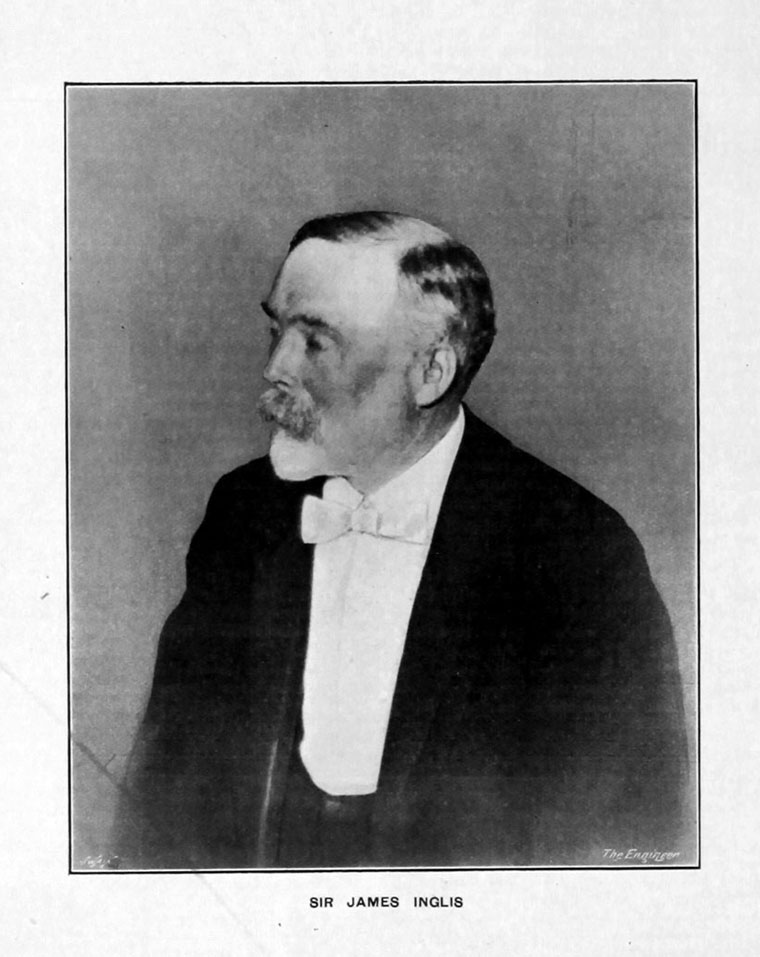 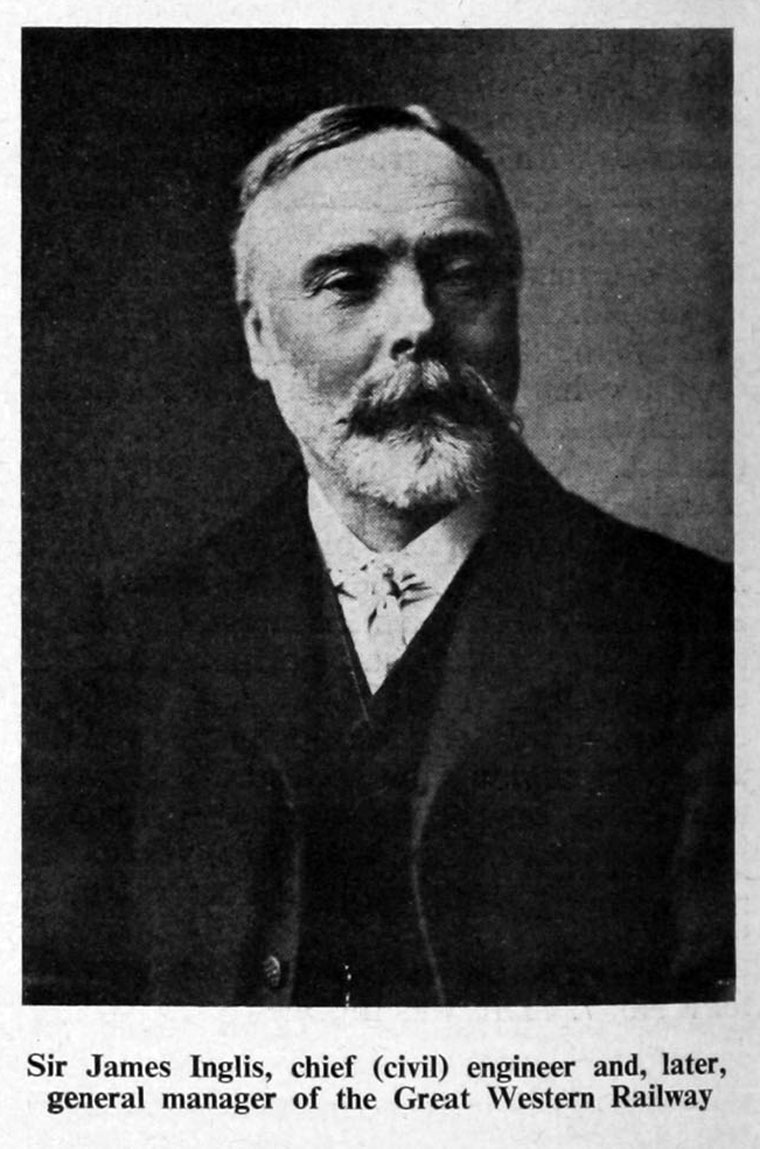 He served in the Engineer and Railway Staff Corps, an unpaid volunteer unit of the Volunteer Force which provided technical advise to the British Army. He was appointed a Major in that corps on 24 June 1893, by which time he was also a member of the Institution of Civil Engineers

He was promoted to Lieutenant-Colonel of the Engineer and Railway Staff Corps on 1 April 1908 on the date that it transferred from the disbanded Volunteer Force to the newly raised Territorial Force.

Inglis was elected president of the ICE for the November 1908 to November 1910 session. During his time as president he saw the start of construction of their new headquarters at One Great George Street. Inglis ceremoniously laid the foundation stone for the building in 1910 after placing beneath it copies of the institution's Royal Charter and the Telford, Watt and Stephenson medals awarded by the institution.

He was knighted by King George V at St James' Palace on 23 February 1911 by which point he was the General Manager of the Great Western Railway.

1911 December 19th. Died and is buried at Kensington and Chelsea Cemetery, Hanwell in London.

SIR JAMES CHARLES INGLIS, General Manager and Consulting Engineer of the Great Western Railway, died at Rottingdean on the 19th December, 1911, in his sixty-first year.

Born at Aberdeen on the 9th September, 1851, he received his early education at the grammar school there, and later was sent to Aberdeen University, where he studied for 3 years, from 1867 to 1870, taking prizes in natural science and mathematics.

The call of engineering came to him early, at a time when steam engineering and railway construction appealed to the public mind and offered a wide field for capable and enthusiastic youths. Abandoning his intention of proceeding to a degree, on the strongly-expressed advice of the late Mr. Abernethy, he entered the works of Messrs. Norman, Copeland and Company, millwrights and engineers of Glasgow, where he was brought into contact with a great variety of engineering problems and operations, and gained a sound experience in general mechanics.

After two years’ work, at the suggestion of the late Dr. Alex. C. Kirk, he left Glasgow for London, and became a pupil of the late Mr. James Abernethy, Past-President, under whom, between 1871 and 1874, he was engaged on dock and harbour construction, notably on the Alexandra dock works at Newport.

When he left Mr. Abernethy, he became assistant, in January, 1885, to the late Mr. P. J. Margary, who was chief engineer of the South Devon and Cornwall Railways, which, later, became part of the Great Western system. Under Mr. Margary, Mr. Inglis was engaged in the construction of Plymouth Station, the harbour railway there, and the widening of the Newton and Torquay line.

It was in 1887 that he first joined the staff of the Great Western Railway, and became resident engineer of the dock works at Millbay. At this period he did not continue long on the staff of the Great Western Railway, but took up practice on his own account. The connection with the railway, however, was not completely severed, as during the next few years he continued to carry out important work for the company upon commission. He occupied several important positions in the district, and carried out many interesting undertakings.

Thus in 1878 he was appointed engineer to the Cattewater Harbour Commissioners, and built the Mount Batten breakwater at Plymouth. Similarly, as engineer to the Sutton Harbour Company of Plymouth, he designed and carried out a large fish-market there.

In 1882 he became engineer to the Compton-Gifford Local Board, with the special object of carrying out extensive sewerage and outfall works. About this time also he was engaged in the construction of a fishing harbour at Newlyn, which proved a most beneficial undertaking. He also carried out the Torquay harbour works under Mr. Abernethy as consulting engineer.

Among the work done on behalf of the Great Western Railway during this period was the construction of the Princetown Railway from Devonport, through very heavy country, between 1881 and 1883.

His next work for the Great Western Railway Company was the construction, also as resident engineer, of the Bodmin branch, which was completed in 1887. He continued in practice until 1892, and further suggestion of his wide interest is found in the help he rendered in the construction, in 1888, of the laboratory of the Plymouth Marine Biological Association.

In June, 1892, he became assistant engineer to the Great Western Railway and 4 months afterwards he was raised to the position of Chief Engineer of the line. During his tenure of office an active engineering policy was pursued and a number of important schemes were carried out. The conversion of the line from the broad to the standard gauge had just been completed, and the next task was the reconstruction of all the old timber viaducts in Cornwall. This undertaking afforded evidence of his undoubted mechanical ingenuity and foresight in providing against contingencies.

Many of these viaducts, which were monuments of Brunel’s great skill and boldness as well as his originality of design, were of very considerable length, and it was important that the traffic should be maintained during the progress of the work. The original viaducts were found to be perfect as staging for putting in the steel girders on the stone piers where such existed, but in many cases the piers were also of timber, and many expedients had to be devised to enable the work to be done. Certain problems arose in connection with the design of the new bridges, so that the transverse girders could be got through at exactly the proper level below the beams carrying the railway. But these and all other difficulties were overcome as a consequence of the versatile and extensive experience possessed by the subject of this memoir.

Another direction in which considerable knowledge and ingenuity were required was in connection with railway subsidences due to coal-workings. The extent of these on the Great Western line is indicated by the fact that some 60,000 or 70,000 yards of filling per annum were required throughout the system.

In 1903 Sir James Inglis was appointed general manager and consulting engineer of the Great Western Railway, a position which he well merited, not merely for the services which he had rendered, but because of his administrative ability. At the time general satisfaction was expressed at the appointment of a leader of the profession to the full control of an undertaking in which engineering problems bulked so largely.

An outstanding event in the management of the Great Western by Sir James Inglis was the construction - involving seven years’ work - of the Fishguard Harbour in North Pembrokeshire and the establishment of a fast service, by means of high-speed turbine-steamers, with Rosslare, in Ireland, the connection there being with the Great Western and Great Southern and Western Railway of Ireland.

Other important undertakings were the construction of the South Wales direct line via Badminton, and of the joint line of the Great Western and Great Central Companies, the latter shortening materially the route of the former company’s railway to Birmingham.

Sir James served the profession in many capacities. He was a lieutenant-colonel in the Railway Staff Corps and a member of the Engineering Standards Committee. In 1905 he was appointed one of the arbitrators for the purchase of the Tanjong Pagar Docks, Singapore. He was also a member of the Royal Commission on Canals and Inland Navigations.

In recognition of his services to the profession and the country he received the honour of knighthood in January, 1911. He also possessed the insignia of the Order of the Crown of Italy and of the Third Class of the Prussian Order of the Red Eagle.

Sir James Inglis served two consecutive terms of office, from 1908 to 1910, as President of The Institution, a departure from recent precedent being made in his case. From the beginning of his professional career he was closely identified with The Institution.

As a student he won a Miller prize for a paper on 'Theory and Practice in the Construction of Tanks.' His only communication as a member, apart from the presidential addresses, was a Conference Note on 'The Design of Permanent Way and Locomotives for High Speeds,' but he frequently spoke in debate, and his remarks, which were confined, as a rule, to the review of the lessons of practical experience, were ever welcome.

He was elected a member of council in 1897 and a vice-president in 1906. His presidential addresses dealt principally with the science of transport and with the professional status of the engineer and his relation to the economic and political life of the community. His last official act was to lay the foundation-stone of the new building of The Institution in October, 1910.

In personal character Sir James was eminently practical, with a mechanic's instinct to recognize that which rang true. He was thorough, broad in his views, alike in engineering and in his more private opinions. A Liberal-Unionist in politics, he was an Imperialist in the highest sense of the word. Kindly and warm hearted, he did much to encourage others both in business and in private life. Although not gifted as an orator, his utterances were always distinguished by the directness and practical soundness of the language employed, simple as it was in diction. In council and committee work his administrative services were of great value, while in social functions he was genial and ever kindly in his comments.

His death will undoubtedly be deeply regretted by a wide circle of professional and private friends. The loss sustained by The Institution was expressed in a Resolution passed by the Council at its meeting on the 9th January, 1912.

Sir James Inglis was elected an Associate of The Institution on the 5th December, 1876, was subsequently placed in the class of Associate Members, and was transferred to the class of Members on the 18th March, 1884.