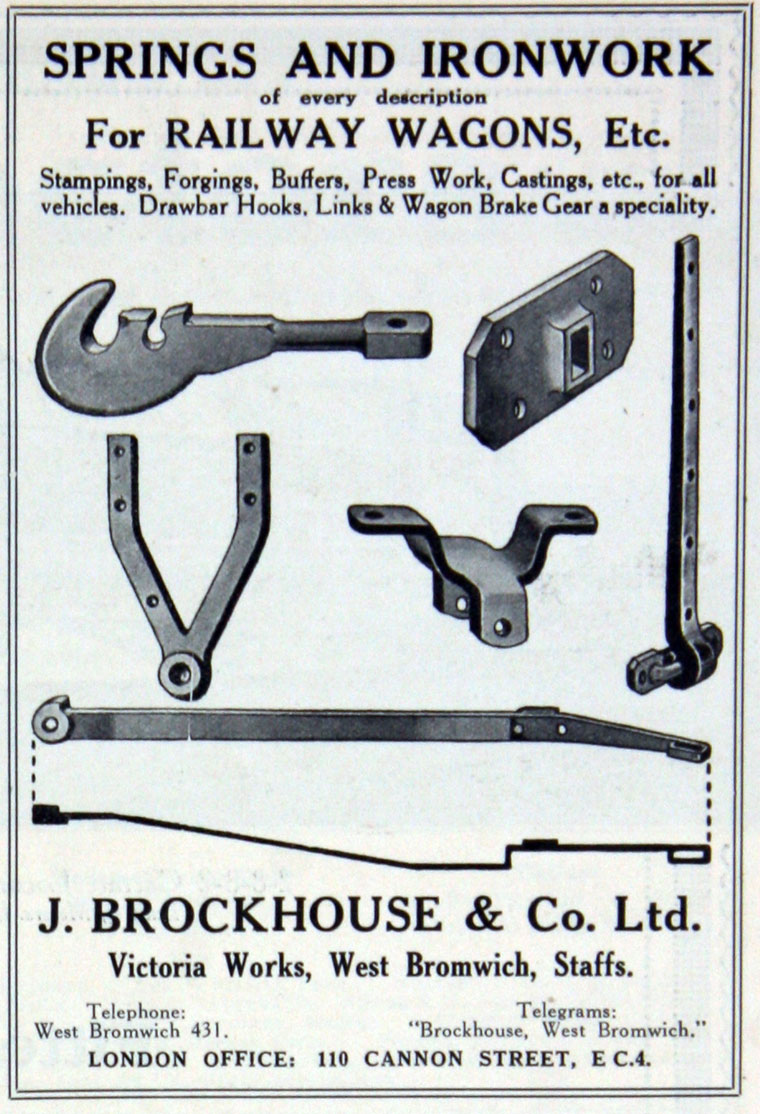 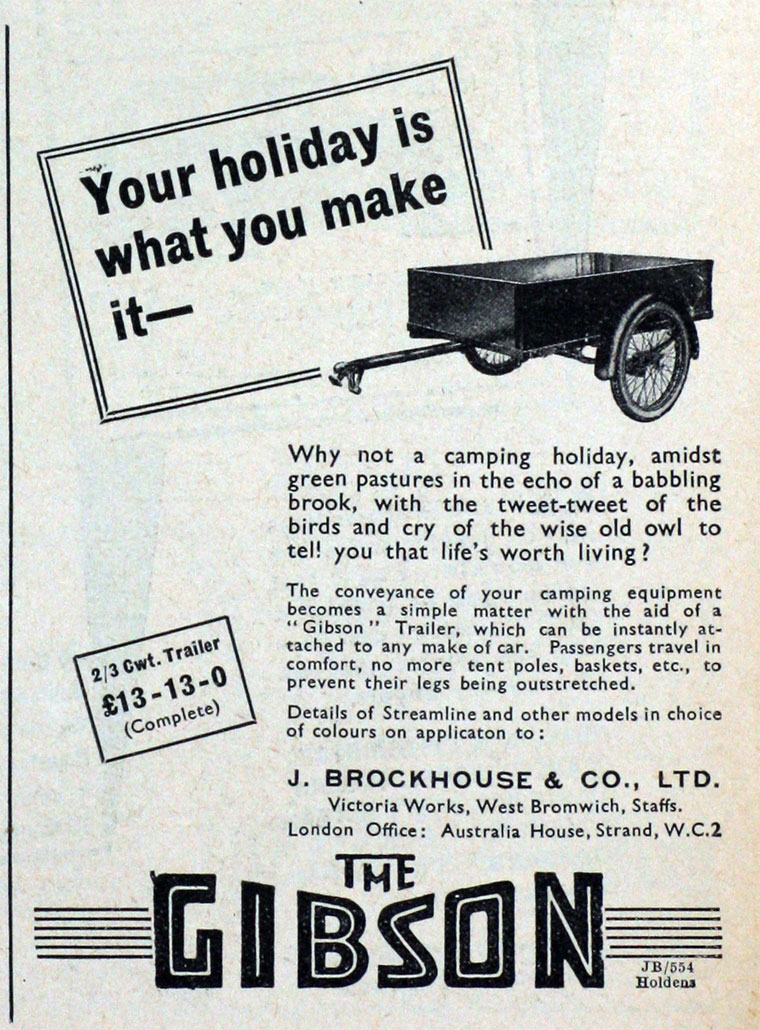 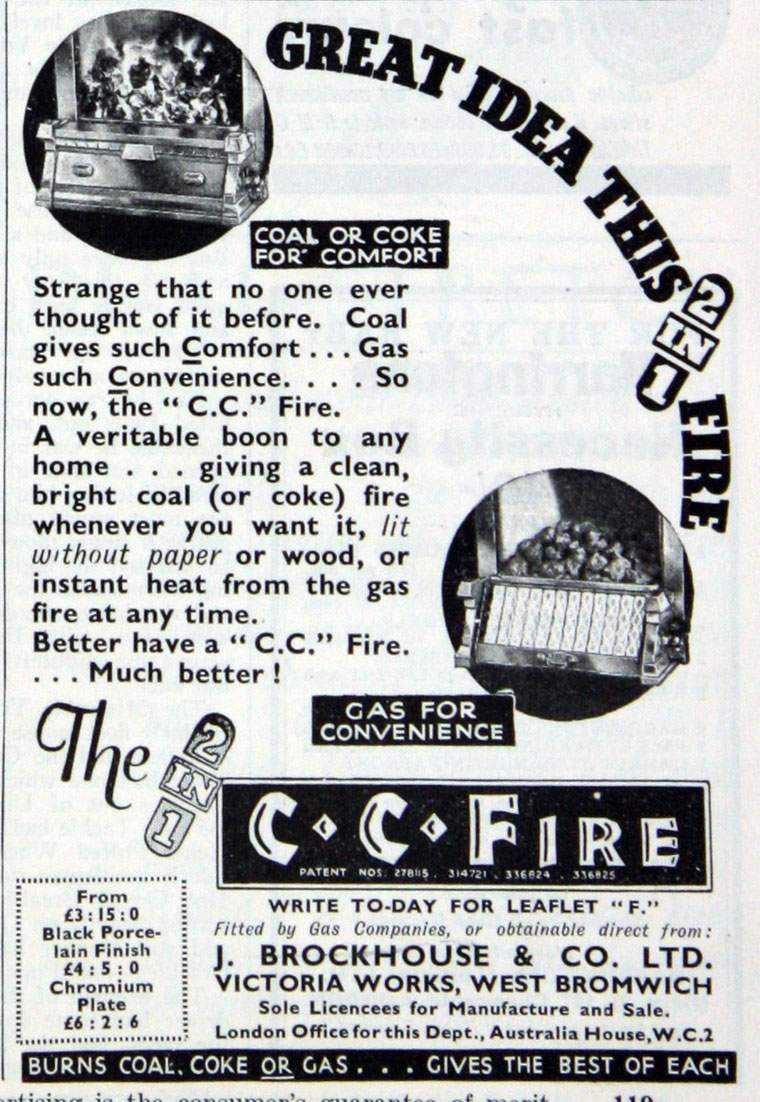 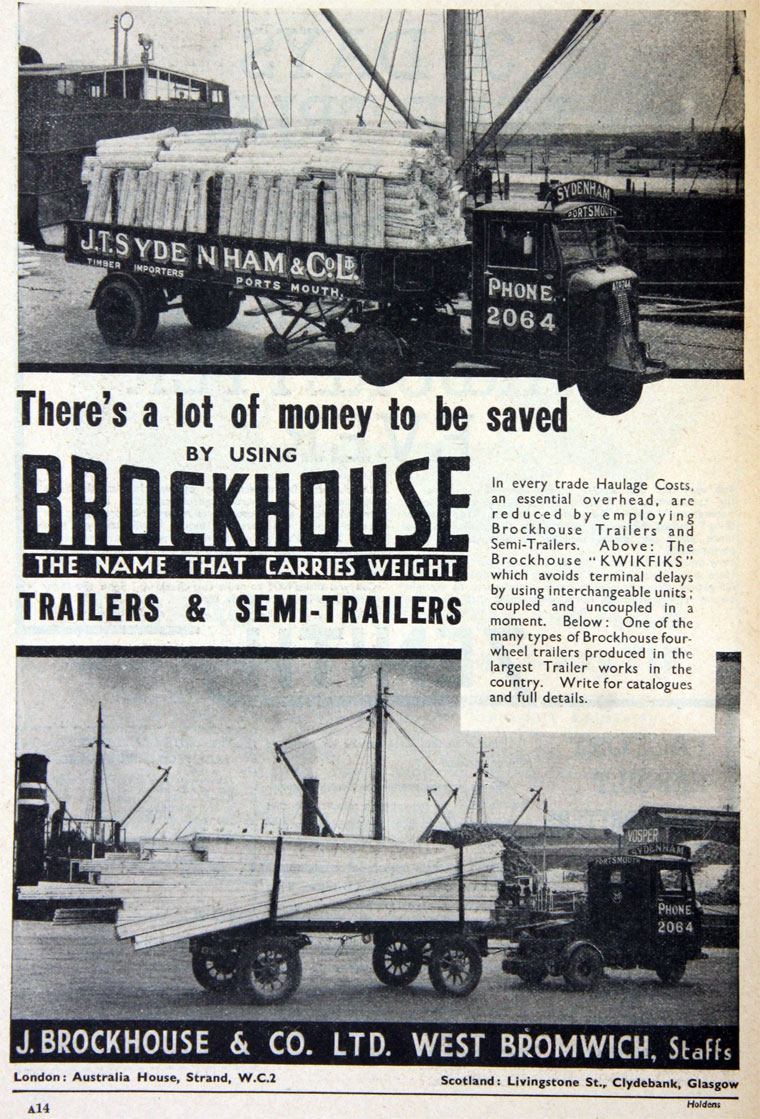 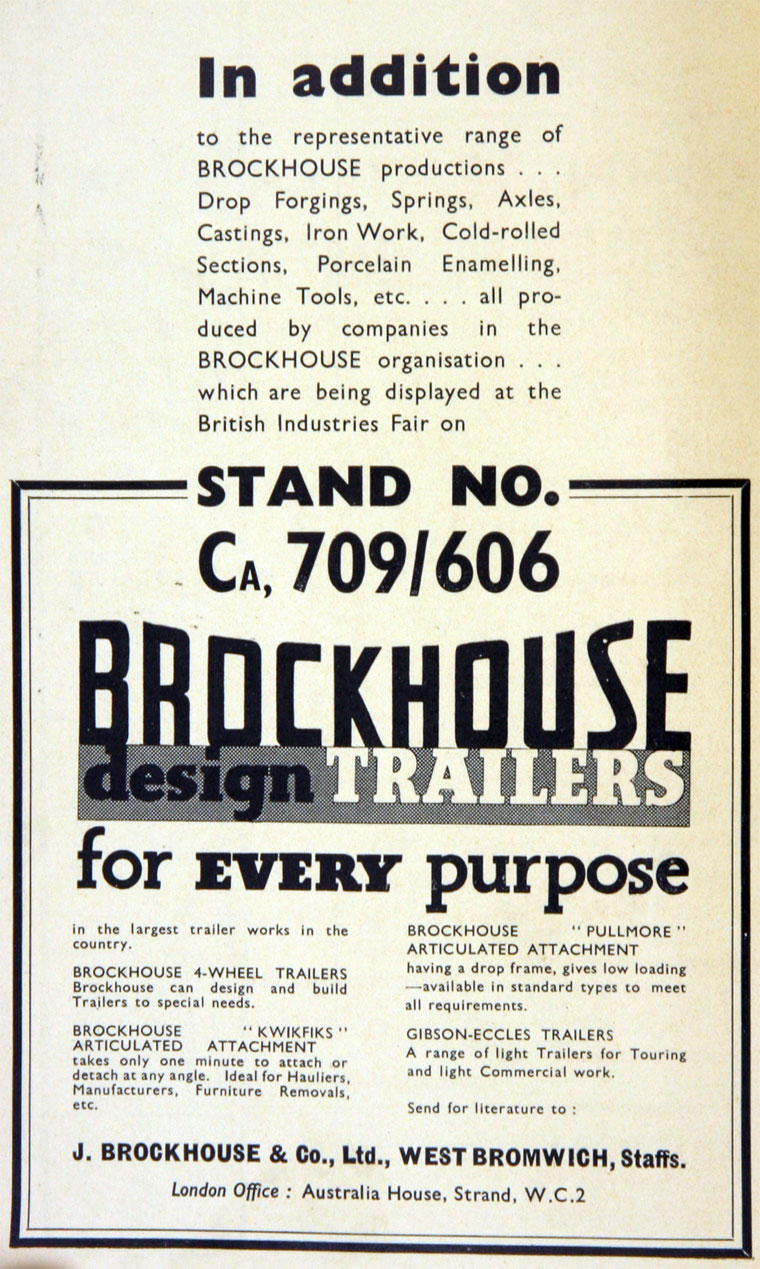 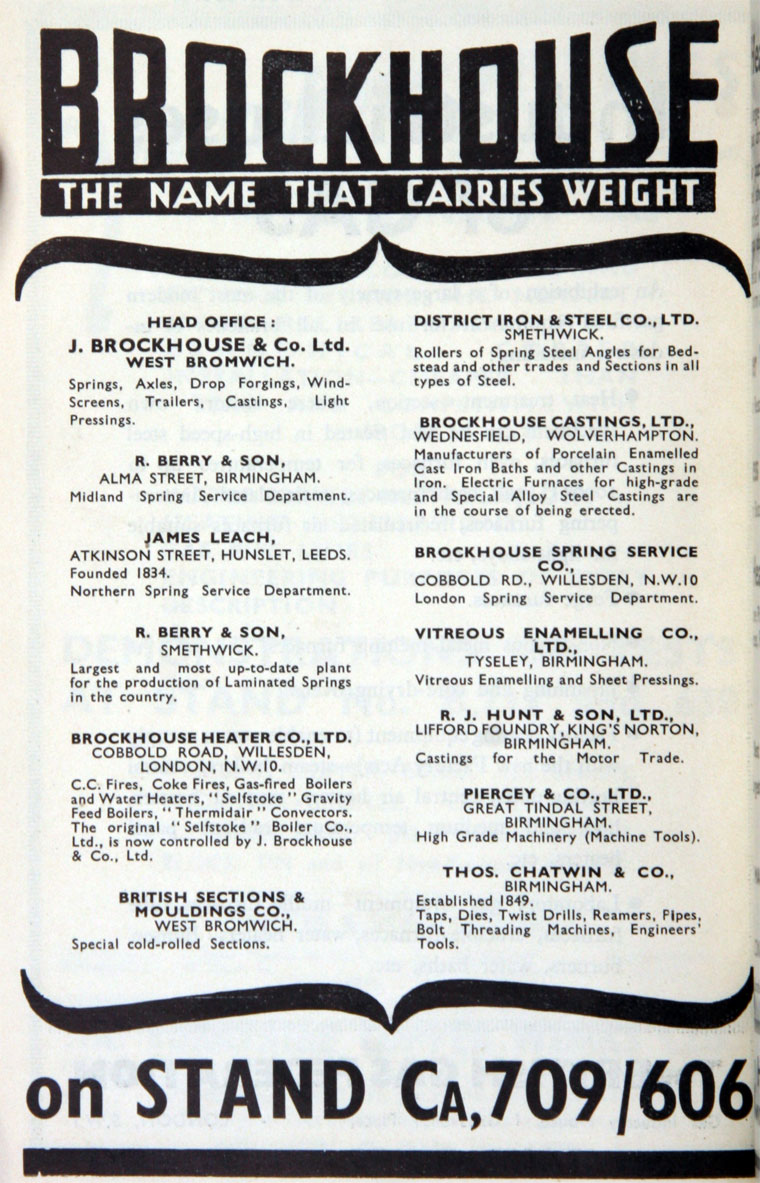 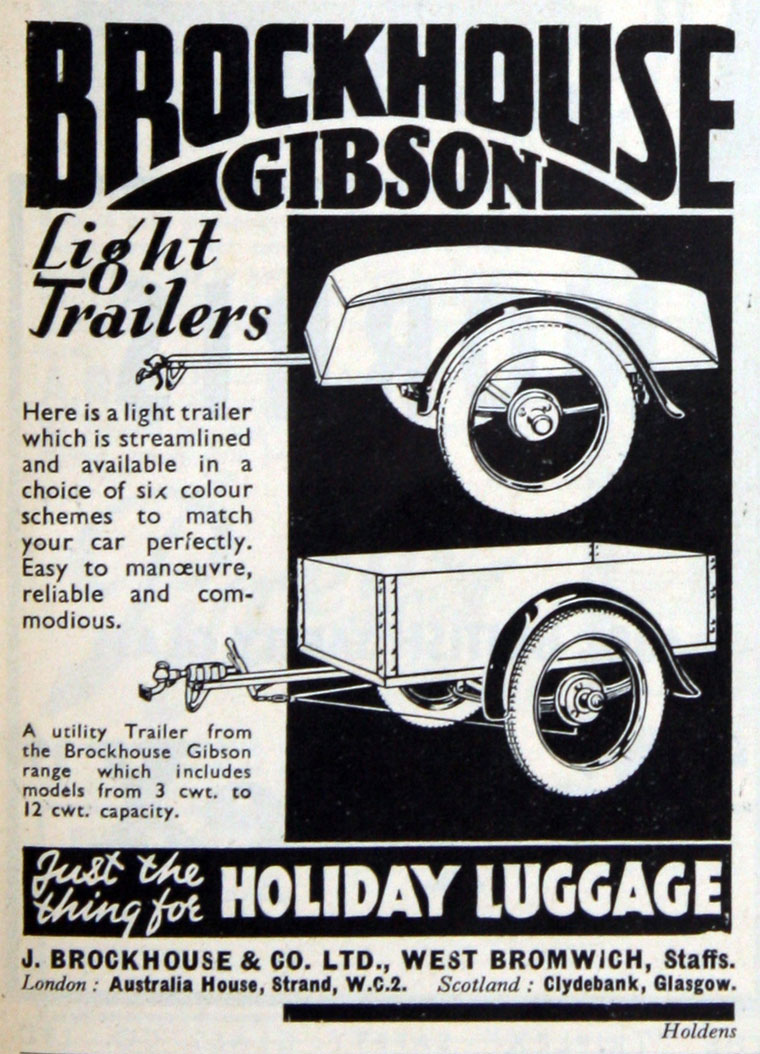 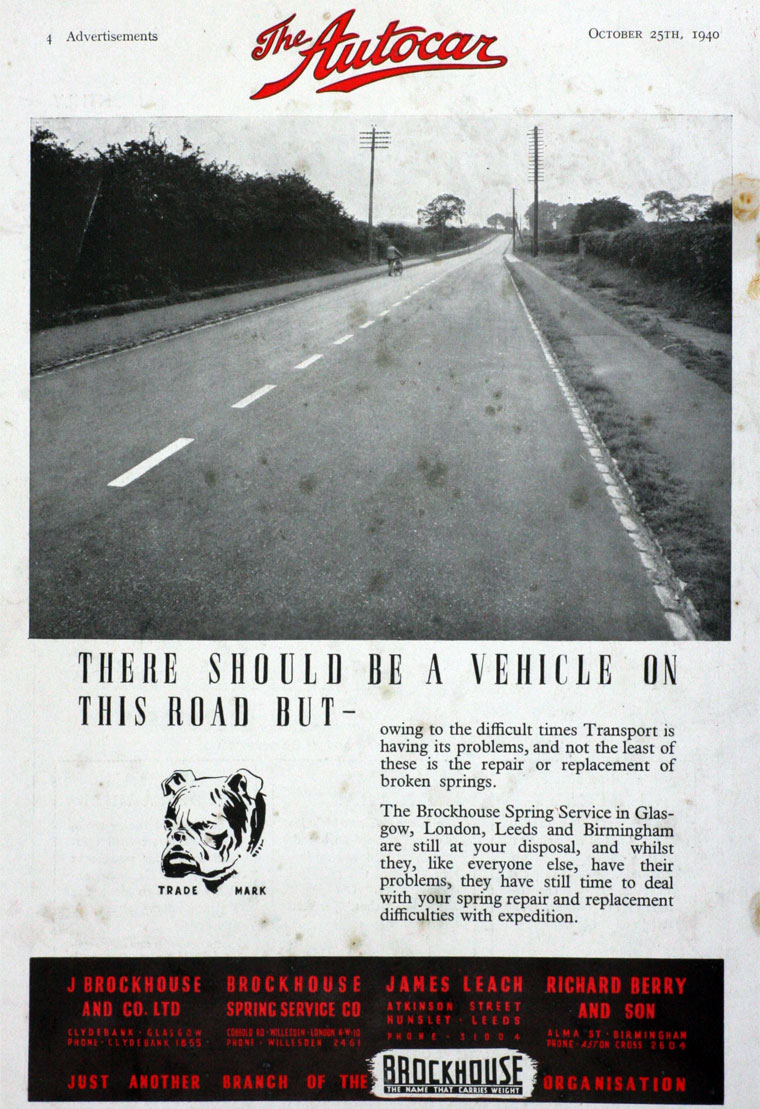 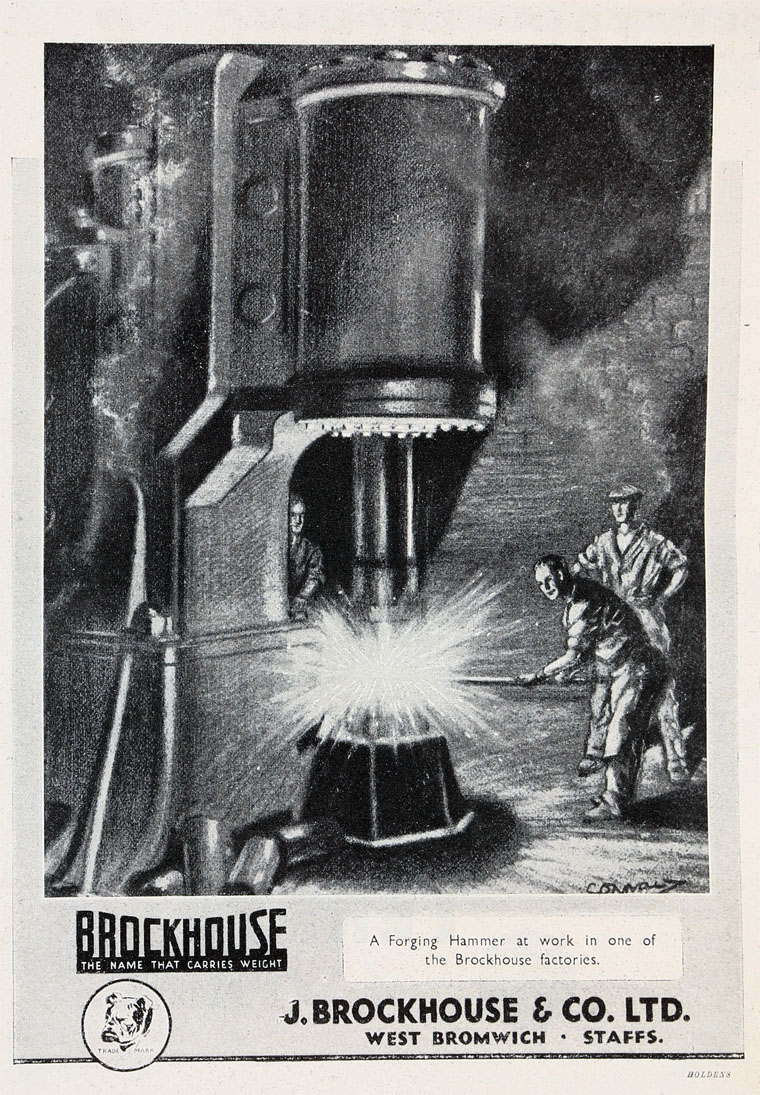 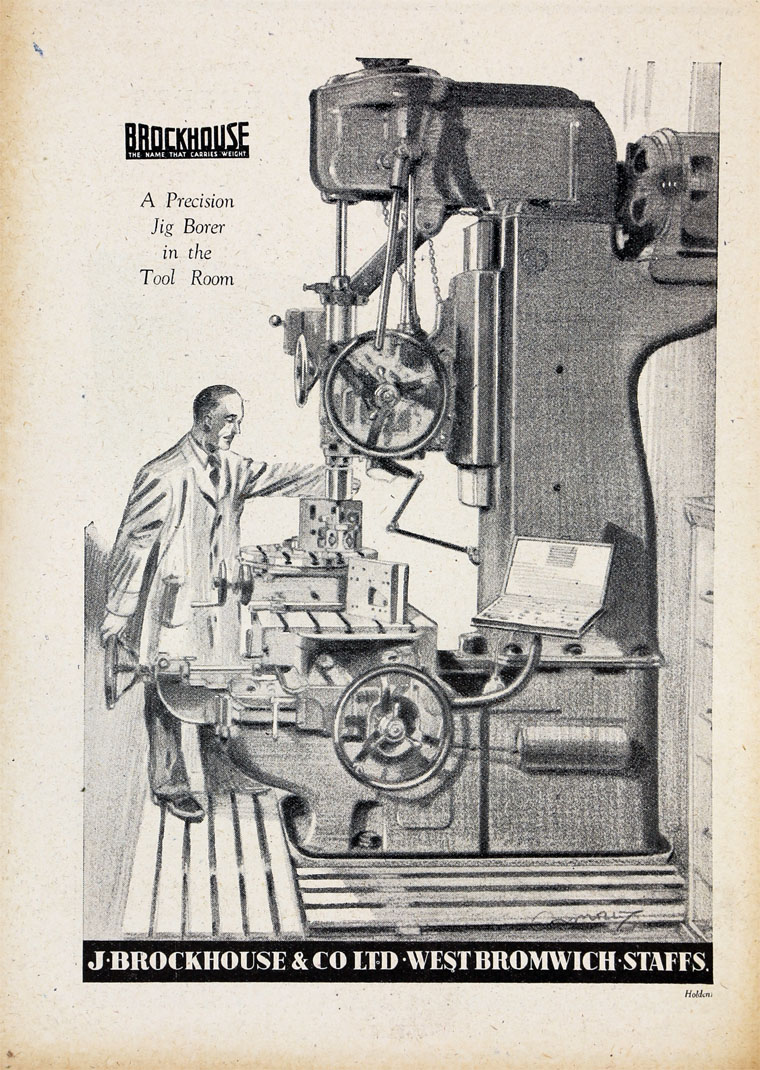 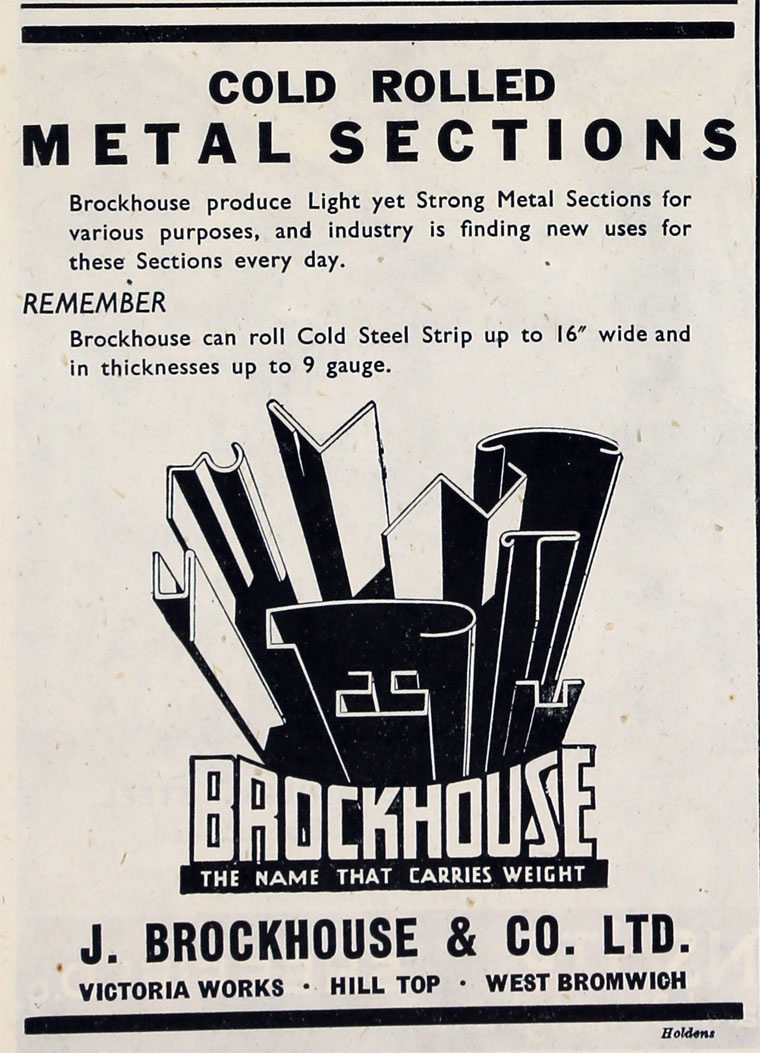 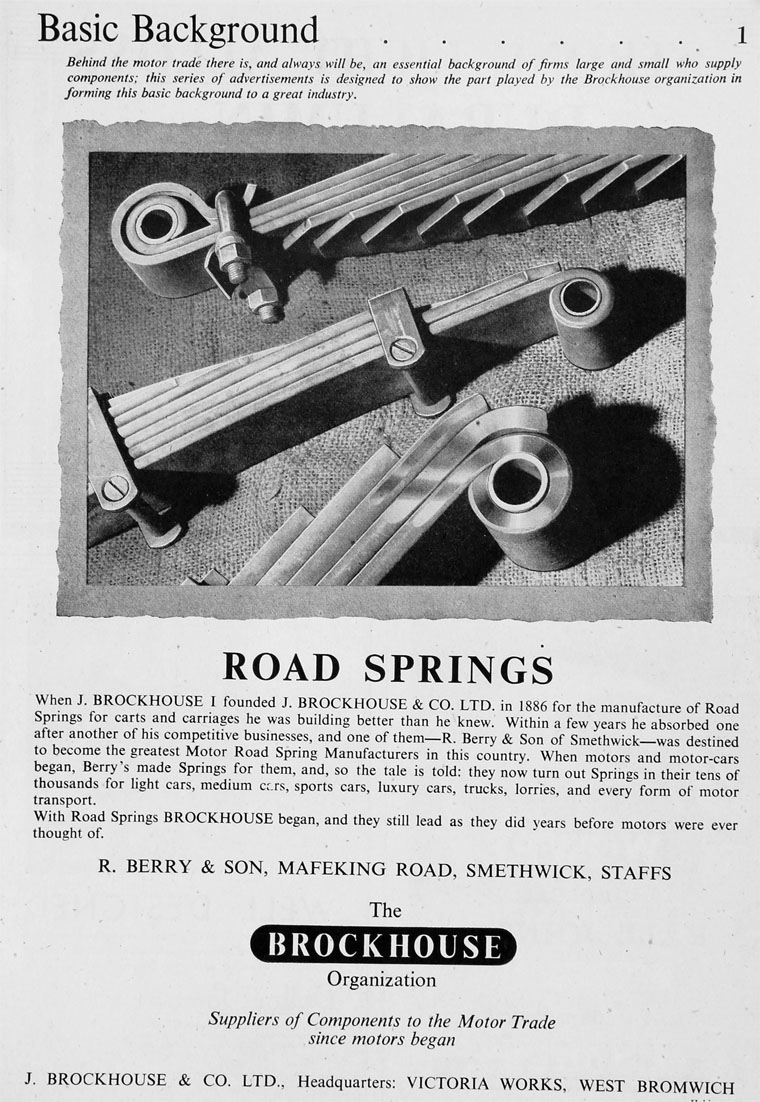 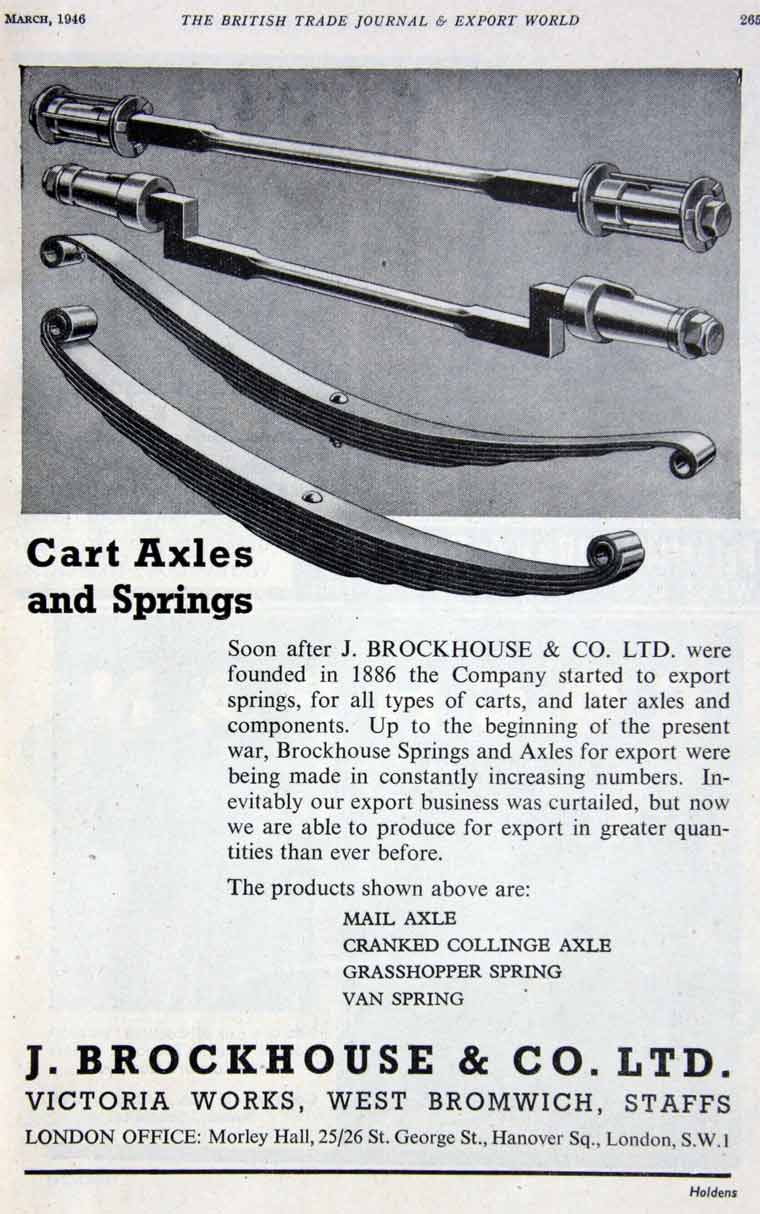 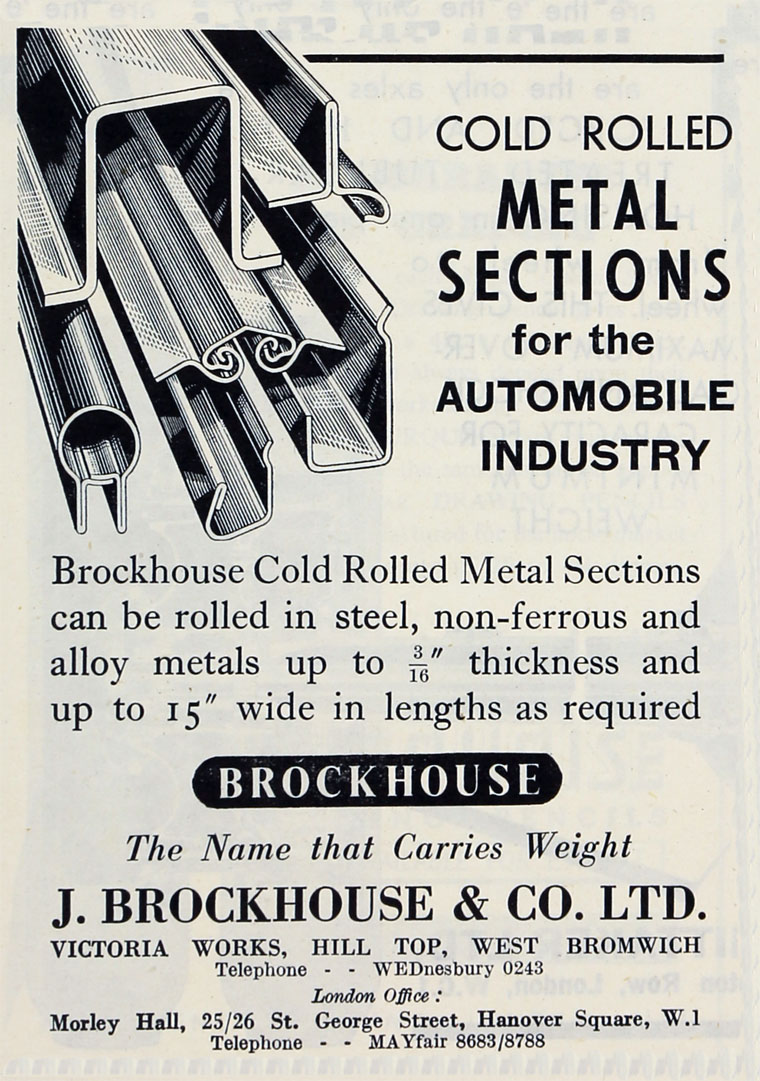 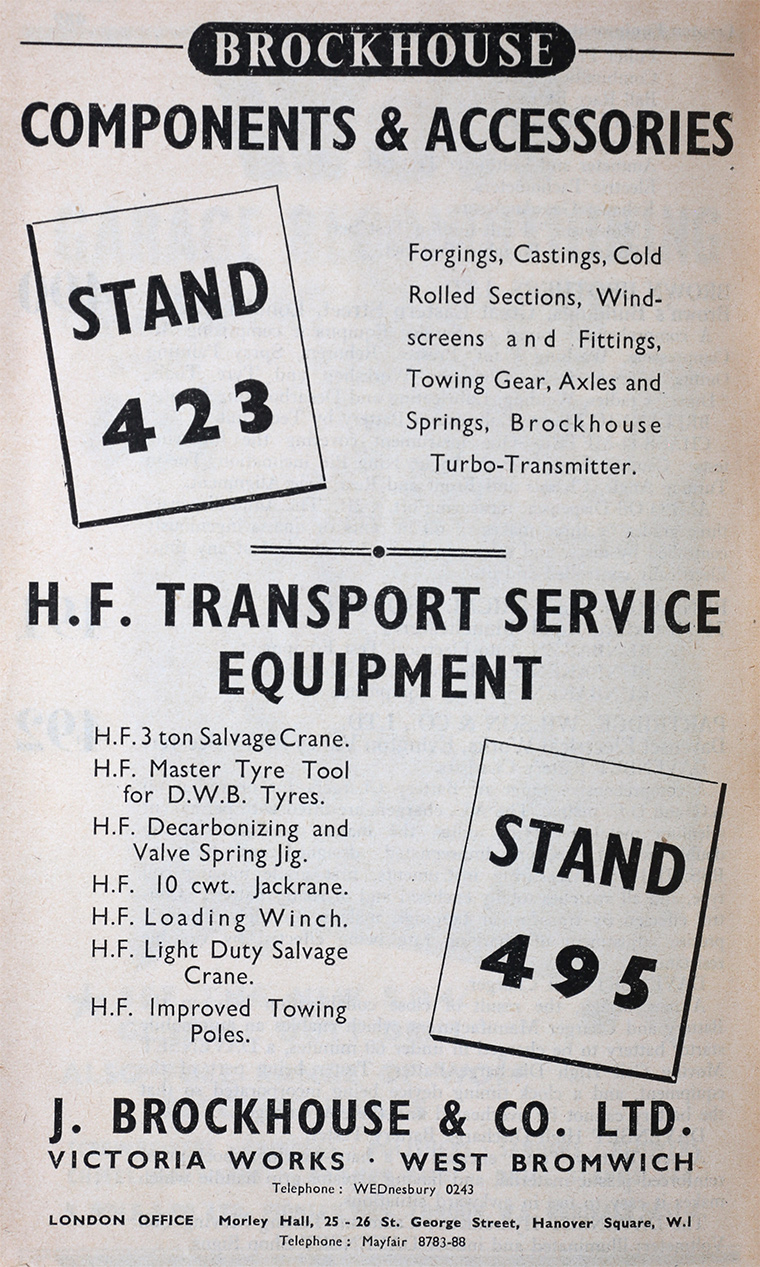 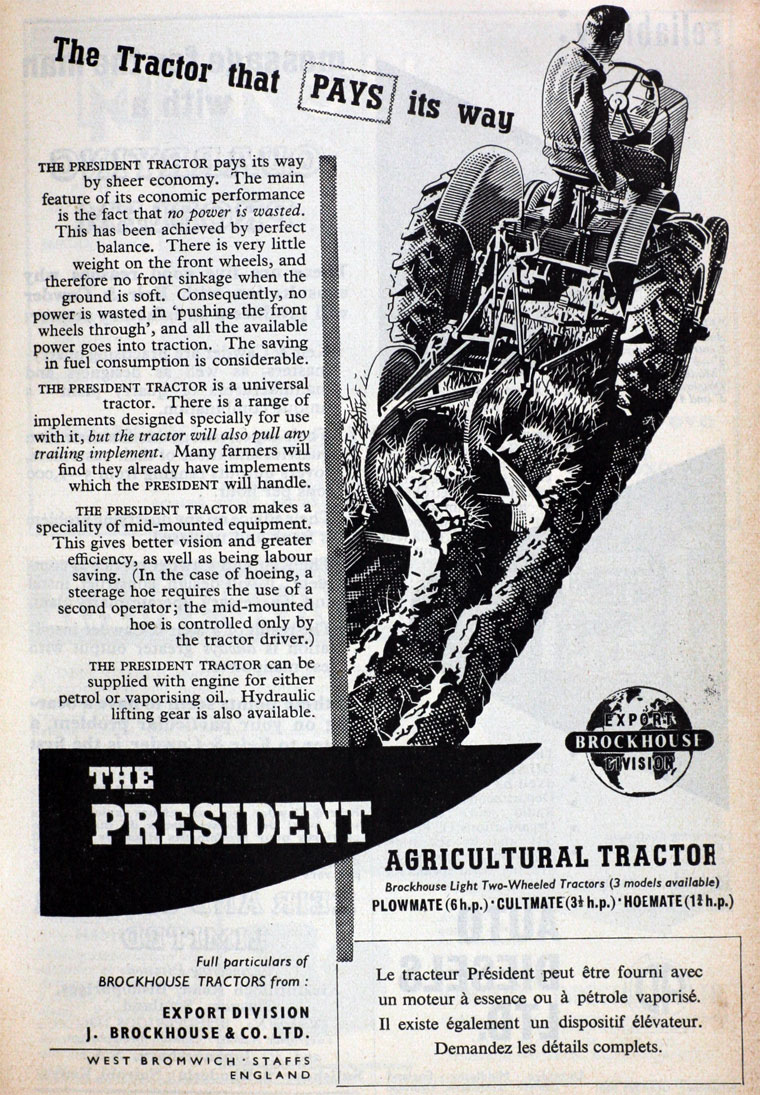 Maker of vehicle axles and springs. Main works and head office in West Bromwich, a branch in Wolverhampton and a branch in Wednesfield, with 26 companies in the group around the world.

1888 Brockhouse was able to build his own premises, next to J. and J. Siddons, in Howard Street, West Bromwich.

1896 The firm was turned into a limited company but it continued to be run by John Brockhouse and his Sons.

1897 Brockhouse added axles to his repertoire and built new premises known as the Victoria Works.

1898 Public company. The company was registered on 28 February, to acquire a business of coach spring manufacturers. [1]

The company's first acquisition was Lones, Vernon and Holden, which concentrated on railway work[2]. During the first half of the twentieth century the company expanded rapidly by taking over numerous other firms, including R. Disturnal and Co.

1911 Of John's sons, Henry Brockhouse, was company secretary; another son, Frederick Brockhouse, was works manager; Arthur was a coach spring fitter and Frank was a foreman in the works[3]

1914 Manufacturers of Axles and Ironwork including Motor, Carriage and Van Springs. Employees 700. [4]

WWI. They seem to have been helped by having "a good war".

1922 The company was particularly successful with John Brockhouse continuing as Managing Director almost until his death, aged 79; one of his surviving sons, John Thomas Brockhouse, took over.

By 1930 principal subsidiaries were:

1932 Bell's Heat Appliances transferred manufacturing of AGA Cookers to J. Brockhouse and Co of Smethwick[7]. A subsidiary, B. H. A. Production was established to manufacture the cookers.

1933 Aga Heat Ltd was incorporated to acquire the 2 companies concerned with the manufacture and sale of Aga appliances - Bell's Heat Appliances and B. H. A. Production

1936 Acquired District Iron and Steel Co of Smethwick whose premises were next door to Brockhouse's laminated springs and railway equipment business unit[8] and Dawkins Enamels and Foundry Co of Wednesfield, which became Brockhouse Castings Ltd[9]

1937 Acquired Vulcan Motor and Engineering Co of Southport which would be used for general engineering [11] but sold the rights to the motor vehicle side of the business. Profits doubled that year. Acquisitions included the Lewin Road Sweeper, Piercy and Co of Birmingham, R. J. Hunt and Son, ironfounders of Kings Norton, and the Vitreous Enamelling Co; taken an interest in the Fluvario Self priming pump for cars; sold Albion Drop Forgings Co; introduced employee profit sharing scheme[12]

WWII Delivered a variety of products to the war effort. The company continued with increasing success but with a weather eye on the need for returning to civilian work when peace came. Dividends were maintained and a rights issue made in 1940 (one of the few).

1943 Acquired Ernest Lake Ltd of Bishop's Stortford, owners of Harvey Frost Ltd, makers of garage equipment, jacks and vulcanizing equipment, which would complement existing parts of the group. Acquired Meldrums Ltd of Timperley, makers of stokers, etc; and John Brooks (Lye) Ltd, maker of anvils and vices. As part of plans for post-war business, the company had developed a new range of municipal vehicles under the Lewin brand, and a hydraulic transmission system for use in all types of self-propelled vehicles. Had built 2 prototype prefabricated buildings[16]

1944 Formed a subsidiary to handle the business in prefabricated buildings, which became Brockhouse Steel Structures

1944 The Brockhouse Group consisted of 24 engineering companies and works[17]. The firms they took over included those making springs and axles but also many others so that, by the second half of the twentieth century, they were a conglomerate.

1944 Acquired Warwick Rim and Sectioning Co Ltd. Was involved in 2 schemes to build steel pre-fabricated buildings, one with Sankeys[18]

After WWII J. Brockhouse and Co acquired the Sunbeam and Karrier trolley bus business from Rootes

At Wolverhampton the company occupied the Elms works on Penn Road, which had originally been built for Sunbeam. When they moved there is not known, nor whether they took over Elm Works directly from Sunbeam.

At Elm Works the company mainly made machine tools. In successive editions of the Wolverhampton Official Handbook they listed the products of this works as: high grade machine tools, automatic injection moulding machines, die casting machines, gear cutting machines, lathes, slideway grinding unit heads, keyseating, milling and broaching machines. At this works they also did complete overhauls of all classes of machine tools; and their drawing office also carried out design work for other companies.

1948 Guy Motors acquired Sunbeam Trolley Bus Co from J. Brockhouse and Co except for the tools section which Brockhouse retained[21]

1952 The US subsidiary, the Indian motorcycle company, again incurred a loss which could only be offset against tax on future profits in USA. Acquired W. E. Cramp and Sons of Tipton, makers of ball bearings[22]

1953 Acquired District Iron and Steel Co from the Holding and Realization Agency[23].

1955 The Southport factory had not been profitable since WWII and was closed; a new machine shop was established at West Bromwich to manufacture hydraulic transmissions. An arrangement had been made with Enfield Cycle Co to manufacture the Indian motorcycle at a new factory at Boston in the UK for export to USA[24]

1959 Sold the Indian Company to Associated Motor Cycles; the name of the US Indian company was changed to Brockhouse Corporation[25]

1961 Acquired a factory with equipment at Denton, Lancs from Craven Brothers, machine tool makers, of Manchester[29]

The head office was at West Bromwich.

1964 The aluminium foundry, Kaye Alloy Castings Ltd, was moved to a new factory at West Bromwich. Other factories extended included the one at Glasgow making prefabricated buildings[33]

1984 the group, which was making a loss, was acquired by Evered Holdings[39]

1987 Brockhouse Castings of Wolverhampton was sold to Saxonforge; the main company was renamed Brooks Castings[40]