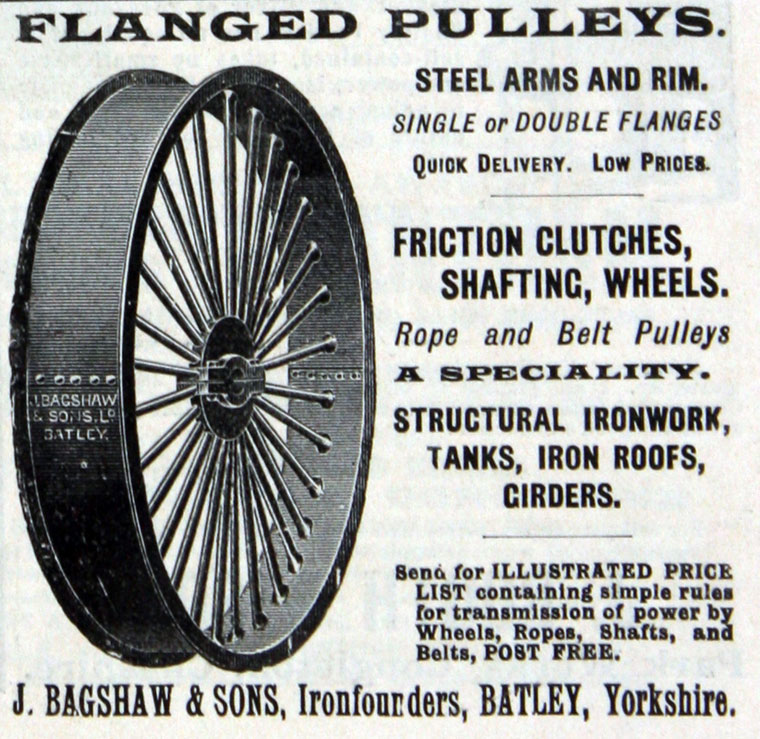 1875 Large compound beam mill engine[1]. It is not clear whether this engine was made by Bagshaw, or whether their involvement was limited to compounding. This involved supplying a new beam with an upturned horn. To this horn was connected the connecting rod of a new small bore, long stroke piston. The new cylinder was attached to the bed-plate outboard of the crankshaft. [2]

1884 Partnership change. '... the Partnership heretofore subsisting between us the undersigned, John Bagshaw, Walter Bagshaw, and Charles Horsfield Bagshaw, carrying on business as Iron Founders, Engineers, and Millwrights, at Batley, in the county of York, under the style or firm of J. Bagshaw and Sons, has been this day dissolved by mutual consent. All debts due to or owing by the said late partnership will be received and paid by the said Walter Bagshaw and Charles Horsfield Bagshaw and Arthur Bagshaw, by whom the said business will in future be carried on under the above style or firm...'[3]

1891 Released a catalogue of their wrought iron pulleys, shafting and friction couplings. [5]

A JB&S friction clutch is fitted to the steam engine made by J. Culverwell at Westonzoyland Museum.