(Redirected from J. A. Brodie)
Jump to: navigation, search 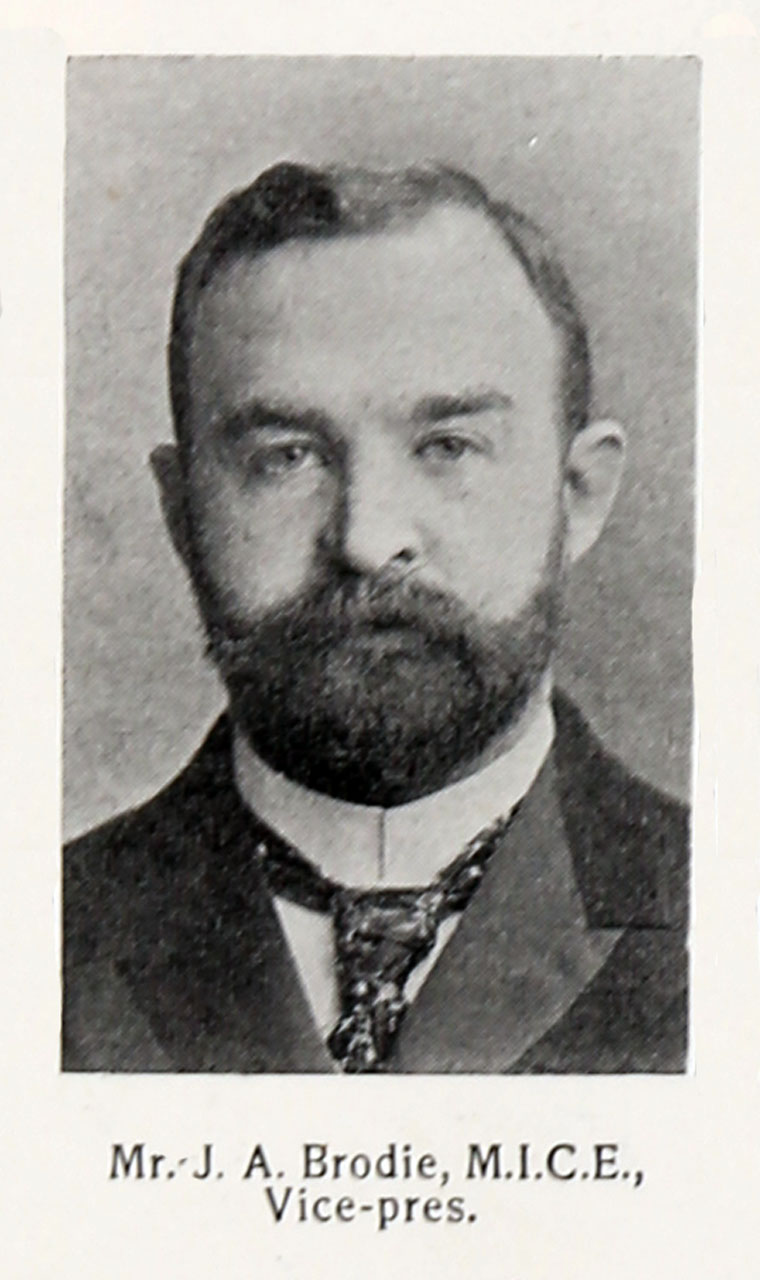 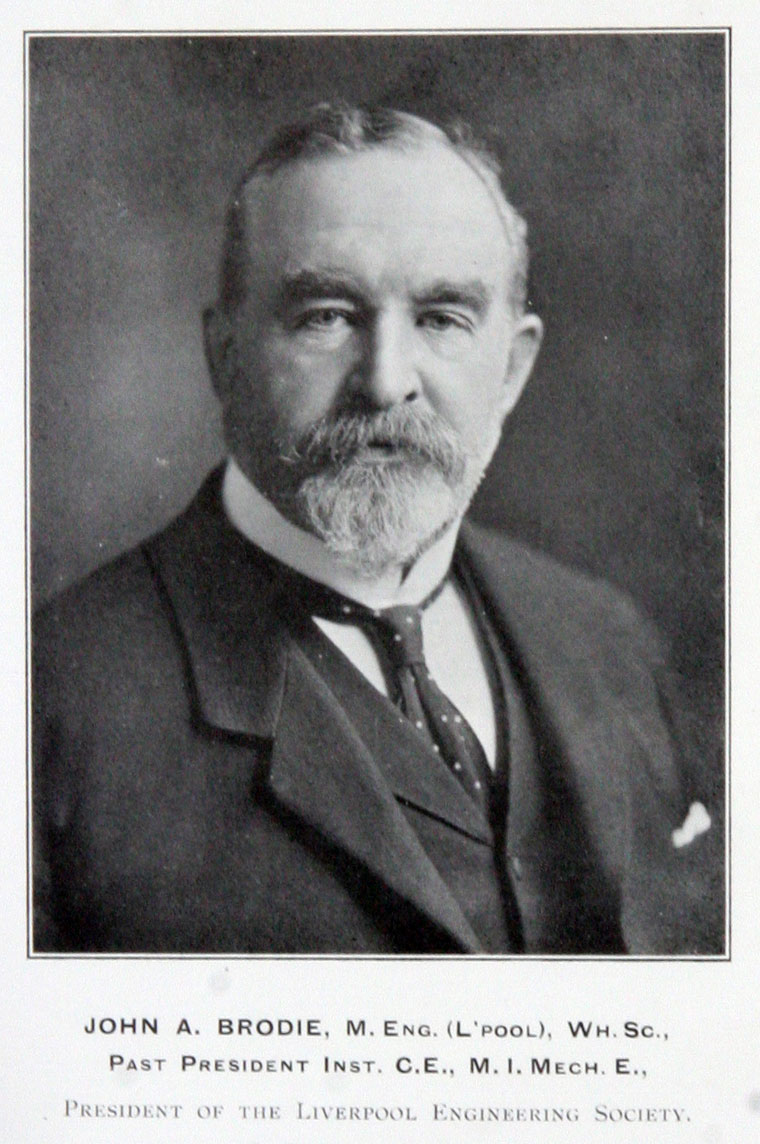 Brodie began his professional career in 1875 working in the Mersey Docks and Harbour Board engineering department under Chief Engineer George Fosbery Lyster, following this he set up a private consultancy and spent some time working in Spain.

In 1889 he invented the goal net for use in football matches and he said that this was the invention of which he was the most proud.

Brodie returned to Liverpool in 1898 as the city engineer suggesting several improvements for the town such as a ring road, electric trams and the East Lancashire Road.

He was at the fore front of pre-fabricated housing technology promoting the use of pre-cast reinforced concrete slabs as a means of building houses quickly and cheaply, he presented an example of this technique to the Cheap Cottages Exhibition at Letchworth where many examples of this kind of building can be found to this day. The design attracted attention from across the world and he is known to have influenced Grosvenor Atterbury who used a similar technique to build the houses at Forest Hills Gardens.

Brodie was also interested in town planning and this was recognised in 1912 when he was asked to help select the site of and plan New Delhi. He visited India twice for this purpose and in 1931 was invited to the official opening ceremony by the Viceroy owing to the high regard that Edwin Lutyens, the chief planner had for him.

He served as president of the Institution of Civil Engineers between 1920 and 1921, becoming the first local authority engineer to receive the accolade. He was also an Associate Professor of Engineering at Liverpool University and vice-president of the Liverpool Self-Propelled Traffic Association which would later become a constituent of the Royal Automobile Club (RAC).

After his death in 1934 Liverpool City Council named Brodie Avenue in his honour.

JOHN ALEXANDER BRODIE, whose connexion with Liverpool covered a period of nearly fifty years, will be remembered for the many great works for which he was responsible during twenty-seven years as city engineer, and by the influence of his farseeing policy on town planning in other parts of the country.

He was born in Shropshire, came to Liverpool in 1875, and commenced a five years' apprenticeship in the mechanical workshops of the Mersey Docks and Harbour Board. He obtained a Whitworth Scholarship and a Canning Scholarship in 1879, and studied at Queen's College, Liverpool.

In 1881 he entered Sir Joseph Whitworth's works in Manchester as a draughtsman, and was engaged on the design of bridges and tramways for Liverpool. He was appointed mechanical and general engineering assistant to Mr. Clement Dunscombe, the Liverpool city engineer, in 1884.

Eight years later he entered into partnership with Mr. John T. Wood, as consulting engineer, and was concerned with the preparation of plans for tramways and light railways. He also devised an improved system of refuse disposal, and a combined destructor and steam generator. In 1898 he was appointed city engineer to Liverpool. In this capacity he was concerned with the extension of the tramway system, and he took a leading part in improving the city drainage and constructed the central area water relief sewer which stopped considerable flooding of certain districts in bad weather. At his suggestion, clinker from destructors was employed as early as 1907 in the construction of houses.

His chief work, however, was in the widening of the main roads and the provision of new arterial routes. He was responsible for the construction of the 7-mile Queen's Drive and its main branches, Queen's Drive itself forming a semi-circle at a radius of 3 miles from the centre of the city; the scheme aimed at providing 120-foot roadways on all tramway routes. The recently completed East Lancashire Road from Liverpool to Manchester was also one of his projects.

He served on the Government Commission in 1912 for the planning of the new Indian capital at Delhi, and was a special guest at the opening ceremony in 1931. He was also intimately concerned with the Mersey Tunnel, reporting with Sir Basil Mott, C.B., and Sir Maurice Fitzmaurice, C.M.G., M.I.Mech.E., in favour of the scheme in 1922. In 1925, following his appointment as joint engineer for the tunnel with Sir Basil Mott, he resigned his position as city engineer.

His death occurred at Aigburth Hall, Liverpool, on 16th November 1934, in his seventy-seventh year.

JOHN ALEXANDER BRODlE, M.Eng. (Liverpool), Past-President, son of the late James Brodie of Kettins, Forfarshire, was born in Shropshire on the 1st June, 1858, and died on the 16th November, 1934, at Aigburth Hall, Liverpool.

He was apprenticed in 1875 to Mr. G. Fosbery Lyster, M. Inst. C.E., who was then Chief Engineer to the Mersey Docks and Harbour Board.

In 1879 he was successful in obtaining both a Whitworth Scholarship and a Cannings Scholarship for mathematics at Owen’s College, Manchester. He then underwent a 3 year’s training in the shops and drawing office of Sir Joseph Whitworth, Manchester.

In 1881, he received a temporary appointment in the Liverpool City Engineer’s Department and then worked for some time on harbour works near Bilbao in Spain. He returned in 1884, when he was appointed general engineering assistant in the office of the City Engineer of Liverpool.

In 1892 he entered into partnership with Mr. John T. Wood, M. Inst. C.E., as a consulting engineer, and was responsible for carrying out a number of water and sewerage schemes and for the construction of docks, light railways, destructors and pumping stations.

In 1898 he was appointed City Engineer of Liverpool, which post he held until his resignation in 1926, shortly after his appointment as joint engineer with Sir Basil Mott, Past-President, for the Mersey roadway tunnel (Queensway).

Although Mr. Brodie carried out many important works while holding the post of City Engineer, it was as a town-planner that he will probably be longest remembered. He was responsible for giving Liverpool many miles of arterial boulevards, including the great Queen’s Drive, and the East Lancashire Road was first suggested by him. He was a member of the Road Board, an advisory body to the Board of Trade, the functions of which Board were subsequently merged in the Ministry of Transport, and was later appointed a member of the Roads Advisory Engineering Committee to the Ministry of Transport.

In 1912 he was commissioned to advise the Government of India on the laying-out of the new capital at Delhi, and 19 years later he was one of the special guests invited to attend the official opening of New Delhi.

Mr. Brodie was elected an Associate Member of The Institution on the 14th January, 1890, and transferred to the class of Members in 1897. He was elected a Member of Council in November, 1910, and served as President during 1920-21, being the first Municipal Engineer to fill t,hat office. He was President of the Institution of Municipal and County Engineers for the year 1907-1908, and was twice elected President of the Liverpool Engineering Society (1898 and 1923) and for many years he was Associate Professor of Engineering in Liverpool University.

He was one of the first to foresee the revolutionary developments of motor transport, and took a leading part in the formation of the Self-Propelled Traffic Association - the parent of the Royal Automobile Club.

Among several inventions of Mr. Brodie probably the most popular was the football goal-net, which was first used in 1890. He was a keen sportsman, and in his younger days achieved some eminence as a rugby footballer. His recreational pursuits included golf, fishing and shooting.

In 1897 he married Aimee, daughter of the late Mr. Hugh Freeland, of Uddington, Glasgow, by whom he had two sons and two daughters.