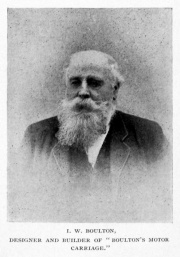 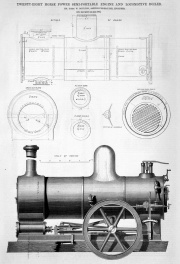 Isaac Watt Boulton (1823–1899) was a British engineer and founder of Boulton's Siding, the locomotive hire business

1823 Born at Stockport the son of John Boulton of Glossop

In 1841 Boulton began an apprenticeship with the Sheffield, Ashton-under-Lyne and Manchester Railway under Richard Peacock.

Joined his father's canal boat business and remained there until 1845.

After this he set up an engineering business but little is known about it except that he built at least one steam carriage (probably similar to those built by Richard Trevithick and Goldsworthy Gurney) and at least one steamboat.

1847 January. Convicted with his father John of stealing a boat and sentenced to three months imprisonment [3]

In 1854 he joined the locomotive department of the Manchester, Sheffield and Lincolnshire Railway at Gorton.

He left in 1856 and set up another engineering business at Portland Street, Ashton-under-Lyne, where he built and repaired steam engines of various kinds.

In 1858–1859 he bought three second-hand railway locomotives (2-2-0 tender engines built by Bury) and started to hire them out for temporary jobs. The locomotive-hire side of the business grew and so a connection to the nearest railway line was needed. This led, in 1864, to the construction of Boulton's Siding, alongside the Oldham branch of the Manchester, Sheffield and Lincolnshire Railway.

1867 The first recorded race of two self powered road vehicles over a prescribed route was between Ashton-under-Lyne and Old Trafford, a distance of eight miles. It was won by Isaac Watt Boulton against Daniel Adamson, each in steam cars of their own manufacture.

1880 A memorial as a stone boulder in Ashton. The inscription reads "This bowlder was placed here by Alderman Isaac Watt Boulton J.P. of Stamford House Ashton under Lyne in affectionate remembrance of his eldest son Thomas Boulton who was for 9 years a warden of this church born November 5th 1844 and died at sea February 5th 1880 on board the H.M.S.S. Kinfauns Castle whilst on a voyage to the Cape of Good Hope to recruit his health. His remains were committed to the deep in Lat 11° 30' south Long 2° 30' west February 6th 1880.

1888 One person convicted of breaking on to his warehouse [16]

1899 Obituary. Inventor of patent block wheels for traction engines. One time large locomotive manufacturer of of Portland Street, Ashton. He built and ran the first traction engine driving it from Ashton to Old Trafford, and fitted the first steam launch used of Hollingsworth Lake. Native of Littleborough but lived all his life at Ashton and Fairfield. [18]

"...record the death of Isaac Watt Boulton, J.P., of Ashton-under-Lyne, on the 20th inst, in his seventy fifth year, who for many years carried on an extensive engineering business chiefly amongst colliery and railway contractors, and was closely connected with some of the largest works in the country. It is claimed for him that he was the pioneer of narrow-gauge railways, having designed and constructed the first engine 2ft. gauge for a short line near Wigan, and at the time the commercial value of such a small engine was much criticised. Its success is fully described in the work of A. Clarke..."More.

Thomas Boulton, in August, 1867, says: "I ran a small road locomotive constructed by Mr. Isaac W. Boulton, of Ashton-under-Lyne, from here through Manchester, Eccles, Warrington, Preston Brook, to Chester, paraded the principal streets of Chester, and returned home, the distance being over ninety miles in one day without a stoppage except for water. I believe this to be the longest continuous run on record ever accomplished by any road locomotive within twenty-four hours."

But in this Mr. Boulton was mistaken. We have stated in a previous article that Hill ran from London to Hastings and back in one day, a distance of one hundred and twenty-eight miles.

Boulton's engine had one cylinder 4.5in. diameter, and 9in. stroke. The boiler was worked at one hundred and thirty pounds pressure per square inch. The driving wheels were 5ft. in diameter. The driving and the single steering wheels were provided with springs.

Two speeds were obtained by means of two trains of spur gearing between the crank shaft and the counter shaft, the motion of the counter shaft was transmitted to the axle by a pitch chain; the ratios of the gearing were 6.5 to i, and 11 to 1. During the trip recorded above, six persons were carried all the distance, and sometimes there were eight and ten passengers. This is the little engine which ran a race with Mr. Adamson's locomotive, recorded in a previous chapter.