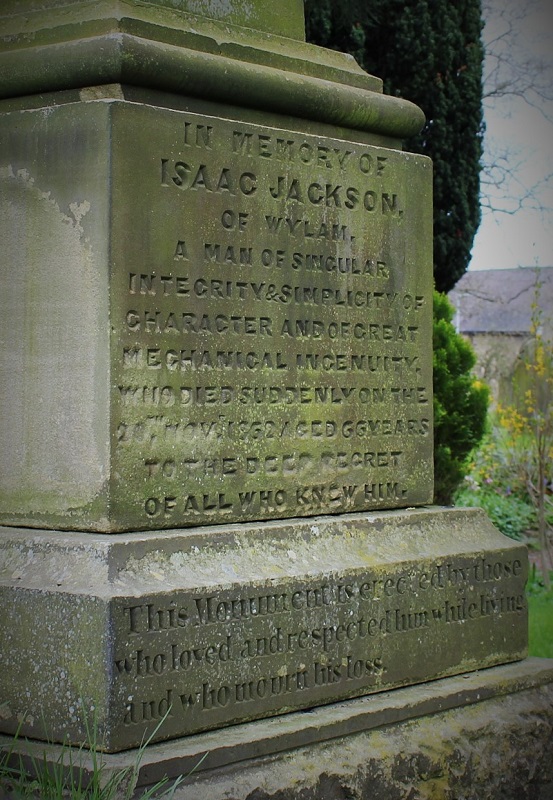 ' This person is a pitman named Isaac Jackson, possessed of extraordinary mechanical genius, and singularly unobtrusive and retiring manners. '

1850 Note: Only the third paragraph below referes to Isaac Jackson, but the full text has been included to provide some context.

'CONDITION OF THE WORKING CLASSES. NORTHUMBERLAND & DURHAM—No. VI. THE COAL AND IRON TRADES AT WYLAM.
The ride westward from Newcastle, by railway, is by general consent regarded as one of the pleasantest which could be selected, either by the local pleasure-seeker or the tourist. A few miles above Tyne Bridge, the landscape presents a series of views as picturesque and beautiful as can be seen in any other part of England. The woodland on both sides of the river, the well-cultivated fields and fertile soil, with the fine residences which meet the eye at every point,—render the locality peculiarly attractive, when contrasted with the dull level country on the east of Northumberland and north-east parts of Durham. The villages, too, have a quiet air of comfort which adds materially to the visitor's satisfaction. They are mostly grown out of some colliery settlement, or manufacturing interest; and, if they be occasionally obscured by smoke, it is a sign of industrial operations all the more gratifying that they are beneficial to the residents. At this season, in particular, when Nature is robed in fairest sheen, the vale of the Tyne, to the west of Blaydon, is exceedingly beautiful — the fields promising abundant return to the agriculturist, the foliage and hedge blossom full and fragrant, and the gardens redolent of summer tints and balmy perfume. In the midst of this inviting scene, the village of Wylam, situated about nine miles from Newcastle, on the north bank of the river, invariably arrests attention by the blaze and smoke of its smelting furnace, which serves as a landmark to the traveller from the west, intimating his proximity to the great metropolis of manufacturing industry at which he soon afterwards finds himself. The village is reached by crossing a substantial bridge, erected fully a dozen years ago, by private company who charge a penny for each passenger going, and the same on his return—a tax loudly complained of, as exorbitant and vexatious; and not without good cause. The bridge must have paid its own cost long ago; and, however reluctant the owners may be to relinquish their present profits, the public have a right to a change, and that speedily. One fare, for crossing and returning, and half the present rate, would be amply sufficient.

'Passing from this local grievance, we notice the iron works. These were commenced about thirteen years ago, by Mr Benjamin Thompson, and consist of a smelting furnace for making pig iron, and fitting shops for constructing locomotives and other machinery. The latter branches have been discontinued since the works came into the possession of Messrs Bell Brothers,whose efforts are confined entirely to the first process. The furnace is a large one, supplied by a powerful steam blast of ingenious construction, and the quantity of iron manufactured weekly averages ninety tons. The ore is brought chiefly from the west coast, from Whitby, and from Scotland, conveyed up the river to Blaydon, by keels, and thence to the works by rail. This undoubtedly is a drawback, compared with similar works which have the materials in the locality; but, the site is otherwise favorable, being easily accessible by land and water carriage, and within a dozen yards of the Wylam collieries. There are forty hands employed, chiefly labouring men who work two shifts of twelve hours each, at the coke and calcining kilns and the blast and furnace. The condition of these men, as regards their remuneration and social welfare, is not of a very high order; the houses in which they live are poor, and their wages low. The Wylam colliery or collieries (for there are two pits) have an average of 220 men and boys, who are generally well employed, contented, and provided with comfortable houses and neat gardens. These pits are free from dangerous gases and reckoned healthy for the workmen, whose average earnings are from 3s 6d to 4s a-day; but, the pits being "laid-in" one or two days a-week lately, has diminished the men's receipts considerably. We heard, however, no very loud complainings; the men seem of a good class, most of their cottages well furnished, and themselves intelligent and orderly. A good feeling subsists towards the agents, and especially towards the owner of Wylam estate — J. B. Blackett, Esq., who appears to act in a very liberal spirit both to his workmen and tenants. The only school in the village was originated by Mr Blackett, and is aided his contributing £20 a-year and a house and garden to the teacher. The latter, who shows much energy and enthusiasm his vocation, has an average of 130 children, at fees of 2d, 2 1/2d, and 3d each per week. Though Wylam has a population of 1000 or 1200, there is but one place of worship, a Wesleyan Chapel, of which the report is a scanty attendance. The nearest parish church is at Ovingham, about two miles further west, to which a few of the villagers repair on Sundays. Besides these works, Wylam has the ordinary share of village tradesmen, several excellent shops, and some say more than its share of beer-houses. Though built without much regard to order, the village has a clean appearance, and is healthy to reside in. The rates and taxes average 15 per cent, per annum, and being a township, it is attached to the nearest poor-law union, that of Hexham.

'Wylam, like many other places of more pretension, has its local "lion," and a genuine one too, whose career, when fully known, will cause a sensation in many quarters. This person is a pitman named Isaac Jackson, possessed of extraordinary mechanical genius, and singularly unobtrusive and retiring manners. Some years before Stephenson made the "Rocket," Jackson had drawn plans of a locomotive with nearly all the qualities of that at present in use; and fourteen years afterwards he produced a model weighing 121bs 12 ounces, with four eccentrics, and capable of reversing itself after making fourteen strokes. He has also made time-pieces and eight-day clocks, nearly all of them being on different principles of construction, and a variety of mathematical instruments of singular beauty and accuracy. What adds to the merit of Jackson is, that he is entirely self-taught; from the time of his coming to Wylam, at the age of seven, he has never been at school. His memory and power of calculation seem not more extensive than precise, original, and authentic; his drawings, both of sections and complete pieces of mechanism, would compare with the best draughtsmen in the country; and, what is as wonderful, he is capable of not only designing complicated machinery, but of making all the parts and putting them together. The lathe at which he works, and his tools, all made by himself, are strikingly beautiful specimens of skill and ingenuity. Being employed twelve hours a-day at the pit furnace, and moreover a poor man, his resources and time are but scanty; but his mind is ever active, and his hands constantly at work in fabricating things new and novel. His history, indeed, is a marvelous one, to which we shall afterwards devote some space and attention.

'Wylam appears to have been one of the first places in the north where tram or waggon-ways were introduced for colliery purposes, and a railway engine of primitive construction is still seen in operation near the colliery. These waggon-ways, which were adopted in various localities to reduce the labour of drawing coals from the pits to the places of shipment, consisted, in the first instance, simply of pieces of wood embedded in the ordinary road, in such manner as to form wheel-tracks for the carts or waggons employed. Afterwards came an improved method, such as the following:—The road was prepared by being levelled or reduced to as uniform an inclination as circumstances would allow; pieces of wood, roughly squared, about six feet long and six to eight inches square, were then laid across it at a distance of about two or three or four feet from each other, and upon these, other pieces, carefully sawn, about six or seven inches wide and five deep, were fastened by means of pegs, in such a manner as to form two wheel-tracks, about four feet apart. The vehicles used upon these wooden railways were generally waggons, containing from two to three tons of coal, mounted upon small wheels, these being provided with flange or projecting rim, which, by coming in contact with the side of the rail, retained the waggon upon the railroad. All this has, of course, given place to modern improvements, and a waggon-way of the usual construction connects the collieries and the iron works with the Newcastle and Carlisle railway.'[1]

1903 'ISAAC JACKSON OF WYLAM.— The Society of Antiquaries visited Prudhoe and Ovingham in 1862; and in the record made of the visit in the Archaeologia Aeliana it is written: "We may venture to note the pleasure with which we viewed Mr.Bigge's admirable specimen of the clock manufactured by a neighbouring pitman, Isaac Jackson, of Wylam. It is a marvel of accuracy." Wylam — where George Stephenson was born - where Mr. Blackett was the first colliery-owner in the North to take an active interest in the locomotive, and was zealously assisted in his experiments (as Mr. Smiles records) by Jonathan Forster, the enginewright, and William Hedley, the viewer, of Wylam Colliery:- Wylam, we say, is identified with the history of the locomotive-engine; and so is Isaac Jackson. There has been ascribed to him, indeed, the introduction into the locomotive of that great desideratum, "the use and application of the four excentrics." In 1821, he built a small engine, weighing 12lb. 14oz, which would run twelve feet and reverse itself. It was exhibited for some time at Wylam, and afterwards purchased by the late Mr. George Burnett, who placed it for inspection in the rooms of the Literary and Philosophical Society in Newcastle. Mr. Burnett eventually disposed of it to some gentlemen of Inverness, and a niche was assigned it in the Museum of that town. The latter years of the laborious life of the ingenious mechanic were devoted to the construction of timepieces, which were highly prized: and when died, his remains were laid in Ovingham Churchyard, near those of Thomas Bewick, the famous engraver. We are now informed that a handsome tombstone will shortly be erected over his grave.'[2]

In 1857 Robert Stephenson visited Wylam, his father's birthplace, and commissioned Isaac Jackson to build a clock for his engineering works. The bill came to £33, and Stephenson added a bonus of £6. Some commentators wondered why he had not rounded up the payment to a round £40! A 1903 article[3] reported that the 'celebrated clock' was in the the General Manager's room, and not only recorded the time there, but also electrically controlled the dial in the front of the building. It stood over 6ft high, had a compensated pendulum, and a three-legged gravity escapement. The clock is now in the possession of the National Railway Museum.[4]

Jackson's model locomotive, which became known as 'Stephenson's 1828 model', achieved local fame at the time, being demonstrated steaming up and down a short length of track, automatically reversing after a certain number of revolutions. This involved having a worm gear on one of the axles, which appears to turn a screw to engage one of two pairs of eccentrics.

For more information, including photographs of the model locomotive, see here[5]

1841 Unmarried, living at Wylam with Edward Jackson and his wife Ann.

1851 Unmarried, living in Wylam village on his own. Occupation Furniss (furnace) keeper.