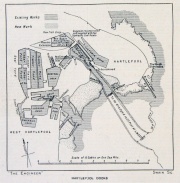 Shipyard model of Engine of SS 'Digby', built by Irvine's Shipbuilding and Dry Docks Co Ltd, on display at the Museum of Hartlepool

1864 Robert Irvine had begun shipbuilding with Alexander Currie in a partnership Irvine Currie and Co.

1881 Robert Irvine changed the name of his business to Irvine and Co.

In the early 1880s the yard started building colliers and small tramps.

1887 Robert Irvine retired, and handed the business over to his son, also called Robert. From this time all new vessels built at the yard were made from steel.

1898 The yard reopened with three berths and a dry dock. The capacity of the yard doubled to 40,000 tons of ships/year due to larger 70 feet plates and the installation of 20 ton travelling cranes to lift them.

1899-1902 Seven tramps were built by the yard as well as standard-design colliers.

1903 Robert Irvine died, the yard was then managed by his sons Robert Jr. and William Charles.

1909 Furness amalgamated his Middleton yard with Irvine's Harbour yard. The trading name was Irvine's Shipbuilding and Dry Dock Co Ltd. Asiana launched in May of the same year was the first under the new company name. Profit sharing was also introduced for workers.

1913 Digby was a cargo liner built at the yard notable for four holds, seven watertight bulkheads and other design innovations which gave it a speed of 12.5 knots on 42 tons of coal/day. She had a side loading port and was able to carry fruit and dairy produce.

WWI The yard had a number of orders for various Furness companies. It then made three "Flower" class sloops and six motorised barges along with eight standard "C" type tramps.

1919 The Furness family sold their shares.

1924 The yard closed due to scarcity of orders.

1930 It was decided to liquidate the yards. The Harbour yard was sold for scrap. The Middleton yard was bought up by a syndicate of local businessmen. This new firm was called Irvine's Ship-building and Dry Docks Company (1930) Ltd. They mainly worked on ship repairing, and on breaking up old ships for salvage. I

1938 the yard was bought out by the National Shipbuilders Security Corporation. Their aim was to close down some of the country's shipyards as there were not enough orders to go around, so helping to ensure that the remainder could survive. Irvine's was closed down for the final time, and the yards were used by other shipbuilders.

The dry dock was filled in. The site of the yard is now the clubhouse and boat compound of the Tees Sailing Club.