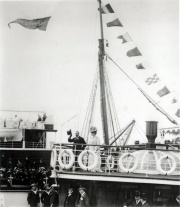 The Killingholme at the opening of the Immingham Dock in 1912.

July 22nd 1912. HM George V and Queen Mary at the opening of Immingham Dock on the Killingholme. 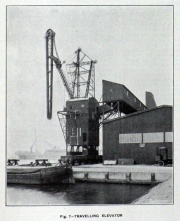 This dock of 71 acres was mainly concerned with the movement of coal, and was completed in 1912.

Immingham Dock was a port facility and linking railways opened six miles downstream from Grimsby by the Great Central Railway (GCR) in 1912. It was first conceived during the company's Manchester, Sheffield and Lincolnshire Railway days in 1874, after test borings north-west of Grimsby had been made by marine engineer Charles Liddell.

1900 Nothing ensued but the idea was revived when the leading marine engineer Sir John Wolfe Barry confirmed Liddell's earlier recommendations.

1904 After some opposition the Humber Commercial Railway & Dock Act was passed on 22 July 1904.

The dock was designed Sir John Wolfe Barry and Partners. It was built by contractors Price, Wills and Reeve of Edinburgh, and equipped by Rowlandson and Ball.

1906 July 12th. 'On the 12th inst. Lady Henderson, wife of Sir Alexander Henderson, the chairman of the Great Central Railway Company, cut the first sod of a new dock at Immingham near Grimsby. The dock is to be 1,100 feet square, with an arm 1,250 feet long by 375 feet wide. The main dock and south-west arm will have a deep water area of 38.5 acres. The land acquired for dock purposes is 616 acres, and there is to be 6,760 feet of quayage. The dock is to have a depth of 35.5 feet below high water ordinary spring tides, or 32 feet below high water ordinary neap tides. The entrance lock is to be 850 feet long by 90 feet wide, and 47.5 feet long at high water ordinary spring tides.'[1]

1912 July 22nd. Immingham Dock opened by King George V and during the ceremony Sam Fay the General Manager of the GCR was knighted.

On completion the total dock area was over 1,000 acres, 2.5 miles in length, over 1 mile inland, with a river frontage of nearly 1.5 miles. It had an entrance lock with three pairs of huge hydraulic gates. On the seaward side of the lock an eastern and western jetty curved outwards until they paralleled the shore;: the eastern jetty was a passenger landing stage with its own double railway tracks; the western jetty, which was partially opened in 1910, was used for coal also with its own double track accessing the mainland via two girder bridges. The total water area was a little under 45 acres.