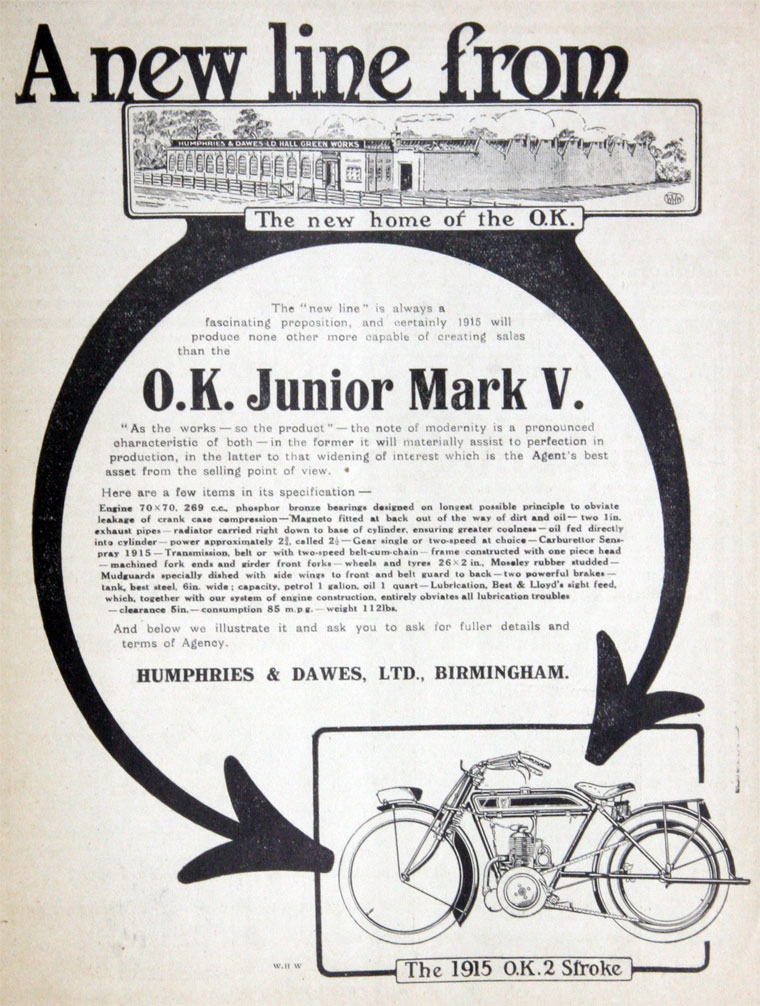 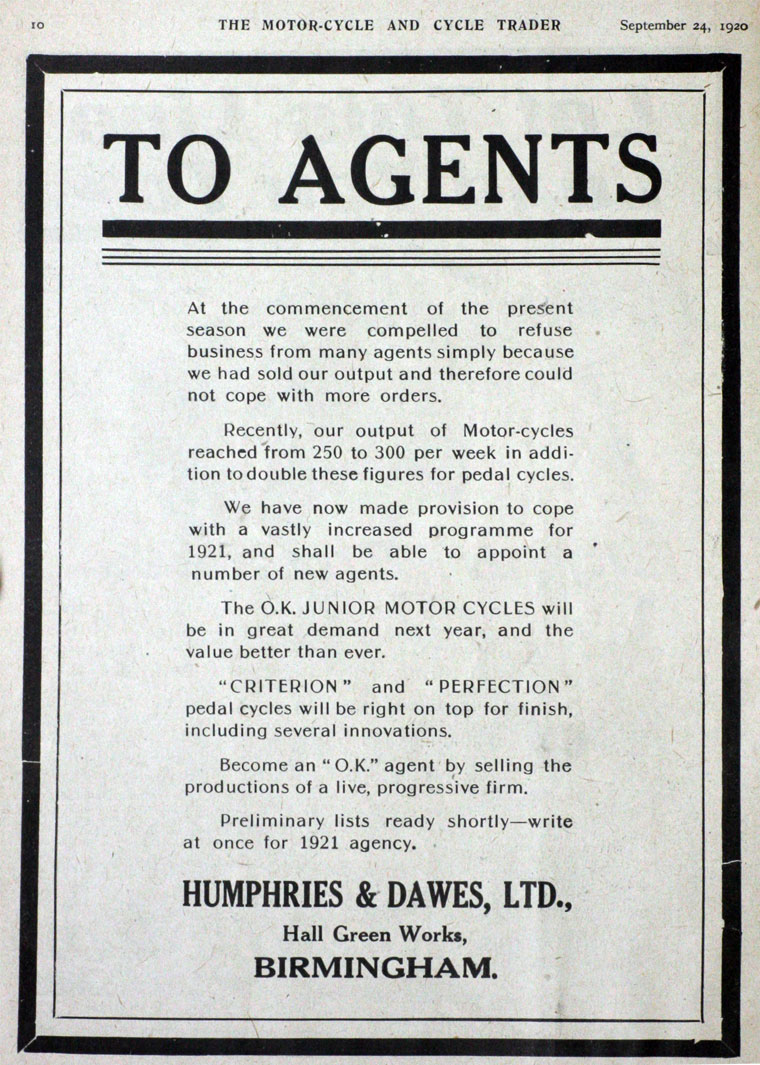 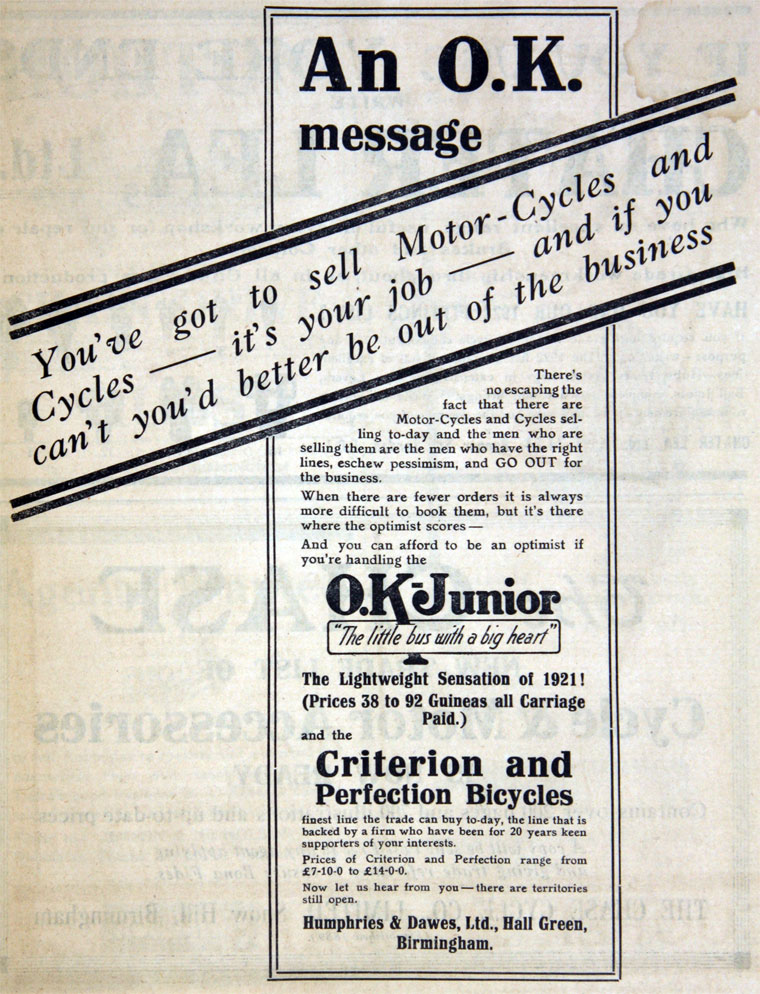 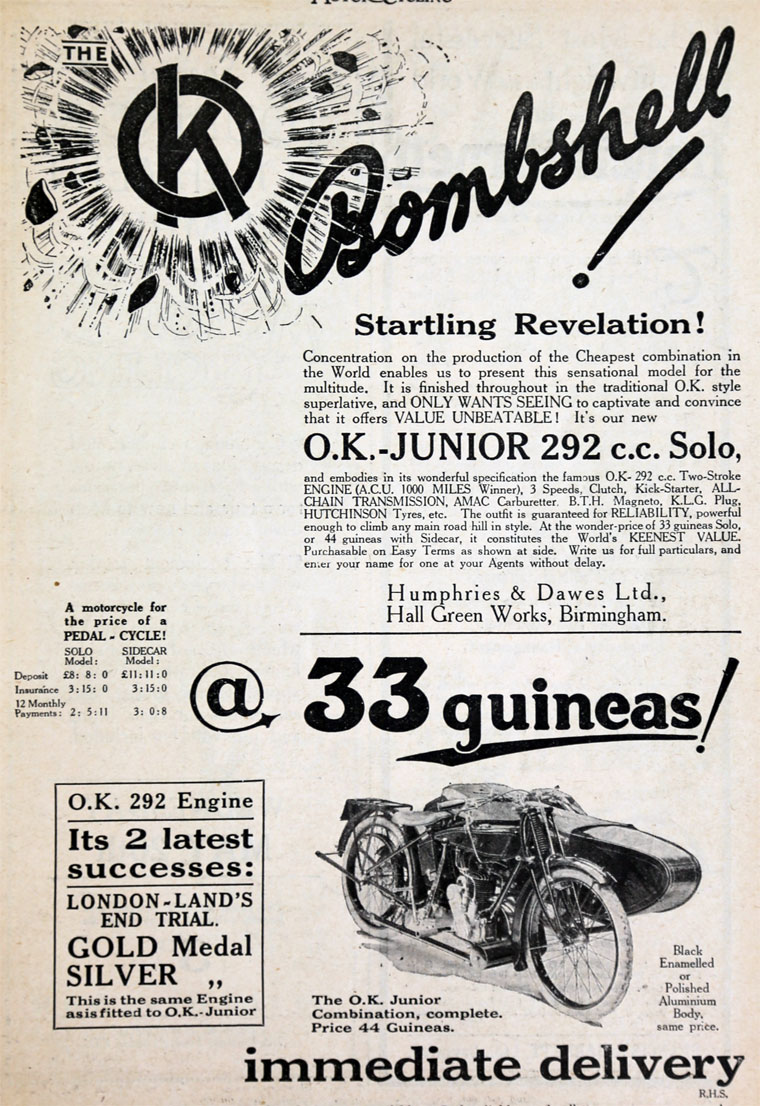 c.1906 At the Stanley Show, they were appointed direct selling agents for Ecco specialities[2]

The partners expanded their business to include motorcycle parts

c.1909 Took over parts of the old Abingdon factory in Shadwell and Bath Streets.

By 1911 they had started production of a two-stroke motorcycle[4], in Hall Green.

1913 The largest model was replaced by one with a 6hp JAP V-twin engine, two speeds and chain drive.

1914 the OK Junior was introduced, fitted with a 2hp engine, with overhead inlet valve, and drove a two-speed gearbox by chain. Final drive was by belt and other components included an Amac carburettor, Ruthardt magneto and Druid forks. other models were the 3.5hp single and 3hp V-twin, both with OK engines.

1919 After the First World War, there was an overwhelming demand for cheap personal transport, so the firm decided to concentrate on one simple and affordable model. This was the OK-Junior, with a 293cc Union two-stroke engine and direct-belt drive. It claimed to be the 'Ford' of the motorcycle world. Arrangements were made to produce 20,000 a year by 1921.

1920 By the middle of the year, 2,000 Juniors per week were leaving the works, when the option of a 269cc Villiers engine was available. Demand soon fell as the post-war buyers' market waned.

1921 To increase appeal a two-speed Albion chain-cum-belt version was listed.

1922 A three-speed Moss-geared model was added.

1923 The range began to expand in a serious way as two four-strokes with Blackburne engines joined the two-stroke.

1925 Those same models were seen again, with a few modifications. Burman gearboxes were standardized, with the Moss as an option.

1926 A new version of the Junior was announced - three speeds, all-chain and with dummy belt-rim brakes to both Veloce moved into the Hall Green works.

1929 Struck off the register of Companies[5]