Grace's Guide is the leading source of historical information on industry and manufacturing in Britain. This web publication contains 149,723 pages of information and 235,473 images on early companies, their products and the people who designed and built them. 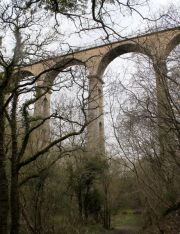 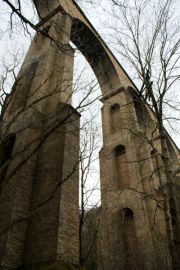 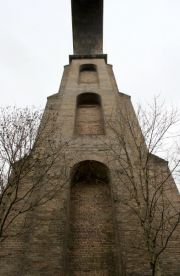 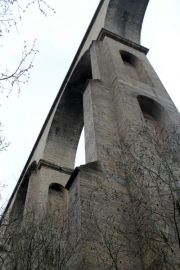 1853 Advert: 'TO RAILWAY CONTRACTORS, BRIDGE BUILDERS, &c.
The Stockton and Darlington Railway Company are prepared to receive DESIGNS (such designs to be accompanied by estimates) for a TIMBER ERECTION, equal to the carrying on of locomotive mineral traffic and across the Gill, known as " Hownes Gill," near Shotley Bridge, in the county of Durham.
No restriction is placed upon parties forwarding Tenders as to the introduction of masonry in piers or otherwise. The depth of the Gill is about 168 feet - the width from bank to bank at the bottom, is about 66 yards - and the width of the extreme opening, about 300 yards.
Further particulars may be had on application to the engineer, Mr John Dixon, C.E., Darlington.
The Company's Engineer will award premiums as under:-
Approved Plan, No. 1 - £50 ...... [1]

Now used as part of a footpath and cycleway.

1858 'OPENING OF THE HOWNES GILL VIADUCT ON THE STOCKTON AND DARLINGTON RAILWAY.-
This structure was opened on Friday last. The directors held their board meeting on the spot-witnessed and participated in the ceremony. In a rough country near the Bradley Hall and Consett Works, the traffic on the line hitherto has been interrupted by a ravine called Hownes Gill, on either side of which inclines, of 1 in 3, afforded but inferior facilities to the inreasing demands of a rich mineral district. A viaduct beeame a necessity, and the company paid a premium to Mr Thomas Bouch, C.E., and Mr John Anderson, the contractor, for their joint design, now accomplished. At half-past 12 a train of 72 laden waggons was passed slowly over the bridge without the slightest signs of shake or deflection being observable. Afterwards a locomotive, appropriately termed " The Leader," repeated this experiment, and then the party,, with numbers of workmen passed and repassed along the entire length at a quick speed and, ultimately, a heavily laden coach train, with a full compliment, satisfatorily proved the perfection ot the work, which, during is progress, has been unattended by any accident, and on its completion has been opened with complete success. The materials used are fire-bricks, manufactured at Pease's and Stobart's works, and stones of the finest quality, hewn from an adjoining quarry-of which there are 3 1/2 millions of the former, and 100,000 cubic feet of the latter. The entire length of the viaduct is 700 feet, its height 175 feet, with 12 arches of 60 feet span each. Fifteen months hare sufficed for its erection, at a cost of £14,000, for a single line of way. It is 45 feet higher than the High Level Bridge.'[2]

1862 'THE HOWNES GILL VIADUCT. This remarkable example of engineering skill, which bears a portion of the Stockton and Darlington railway, is described, as hereafter stated, in the course of elaborate paper referring thereto, and read at a late meeting of the Institution of Civil Engineers in London, by Mr. W. Cudworth, C.E.:-

'The extreme length of the viaduct was 730 ft., and its greatest height from the bottom of the inverts to the level of the rails, 162 ft. It had twelve semicircular brick arches, each 50 ft. span, 14 ft. in length, and 2 ft. 6 in. in thickness. The inverted arches in the foundations, four in number, which were introduced, at the suggestion of Mr. Stephenson, to extend the bases of the three central piers until the weight scarcely exceeded 1 ton per superficial foot, had a versed sine of 14 ft., were 38 ft. in length, and 3 ft. in thickness. The extreme height of the five loftiest piers, measured from the springing of the inverts to the springing of the arches, ranged from 114 ft. to 110 ft.; that of the six remaining piers diminished rapidly towards each end. Their length was 14 ft. at the top, and 38 ft. at the bottom, the latter dimension corresponding with that of the inverts. The piers, within 15 ft. of the inverts, were stayed by buttresses transversely to the line of the viaduct. At this point they were only 17ft. 6in. in length, but below this level the buttresses merged into the piers, when they together had a rectangular section 38 ft. in length. The buttresses were 3ft. thick at the top, and 5ft. thick at the bottom ; their projection from the piers being increased being increased by offsets at intervals of 35ft. The piers, although light in their proportions, were reduced by recesses, 7 ft. 3 in. wide, and averaging 3ft. 9in. deep, sunk in each side, so that the horizontal section of each pier with the buttresses was in the form of a double cross, the brickwork in the middle being only 2 ft. thick. These recesses were not continuous, but were divided into three compartments in height, and by their adoption, the amount of brickwork in each pier was reduced by about 14 1/2 per cent. Between the spandril walls, two internal parallel walls stone were introduced to sustain platform of flagging, on which the waybeams and the ballast were carried. The waybeams, which were of Memel timber, were at first secured to the internal walls by bolts; but as this plan was found to be objectionable, the nuts from the holding down bolts were removed, and a thickness of 6in. of coke ballast was interposed between the waybeams and the flagging. The parapet consisted of substantial cast-iron railing. The firebricks were of excellent quality, weighing 9 lb. 11 oz. each, and cost the contractor at the viaduct £1 11s. 2d. per 1,000. The number used was 2,655,000. It was a gratifying fact that the work was completed without accident, and that not single crack was to be found the whole of the structure. The erection of the scaffolding, which was of very light character, was considerably facilitated by the hoisting tackle being made to traverse stout wire rope stretched across the gill, and firmly fixed at each side. When the arches were about to be turned, the piers were stayed by two parallel wire ropes stretched from end to end of the viaduct. The first brick was laid in February, 1857, and the first train passed over the viaduct in July, 1858. The cost of the structure amounted £15,756, the contract sum having been increased by the additional depth of the foundations, the adoption of a heavier parapet, and by other contingencies. Regarding the viaduct as an unpierced solid, its contents would amount 61,910 cubic yards, and its cost would be five shillings and one penny per cubic yard.'[3]

Cudworth's Paper was presented in January 1863[4]

The viaduct was constructed to overcome a serious bottleneck in the shipping of minerals on the Stanhope and Tyne Railway, opened in 1834. Previously the ravine was negotiated using two inclined planes, worked by a single winding engine. When the engine became redundant, it was advertised for sale in 1864. See below.

1934 'Durham Railway Centenary
To-day will be celebrated the centenary of the Durham portion the L.N.E.R. and of the primitive method of railway operation by inclines. The Pontop Incline was opened on September 10, 1834.
This railway almost resulted in the financial ruin of Robert Stephenson, son of the great George Stephenson. The line ran originally from Stanhope, Weardale, to South Shields, with a number of inclined planes over the moorland. At Hownes Gill the ravine was crossed by two very steep inclines, where the wagons were run separately to a platform which was lowered down one incline by a hauling engine, the wagon transferred to similar platform and hauled up the other side.
On this day, 1834, a train of 100 wagons of coal was brought from Medomsley Colliery and shipped to South Shields. Festivities followed in which a thousand workmen were entertained. With the exception of some ten miles, on which a locomotive was employed, all the hauling on the level, between the inclines, was done by horses.'[7]