Grace's Guide is the leading source of historical information on industry and manufacturing in Britain. This web publication contains 148,463 pages of information and 233,886 images on early companies, their products and the people who designed and built them. 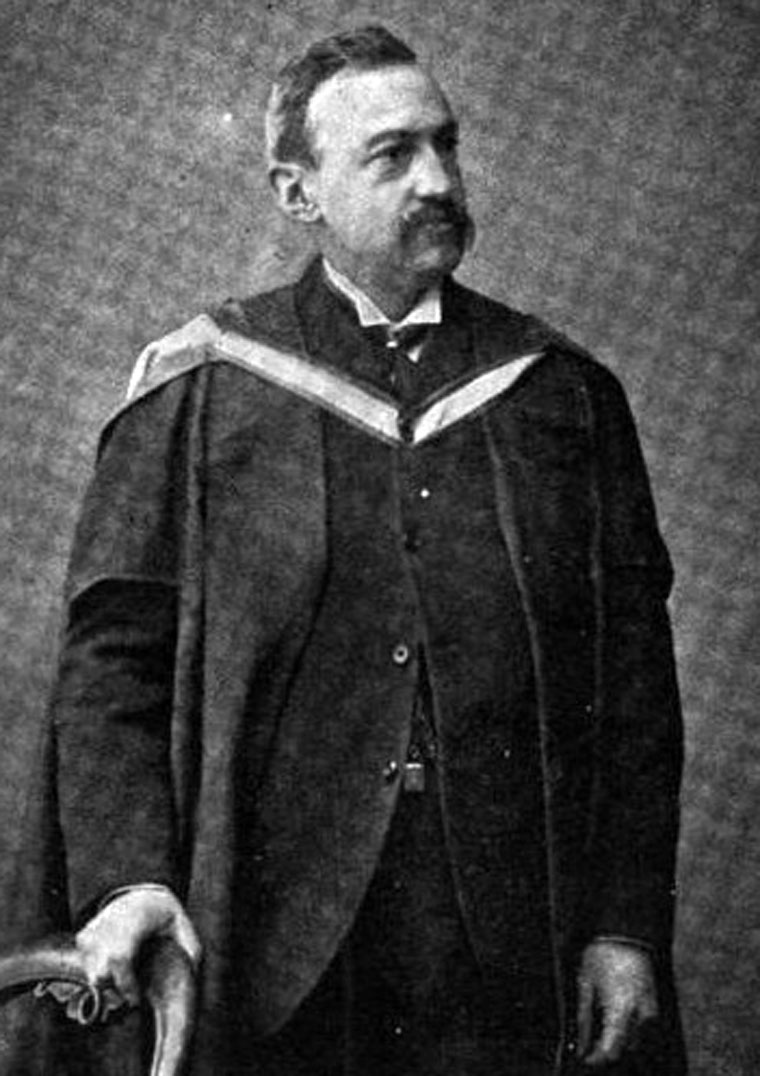 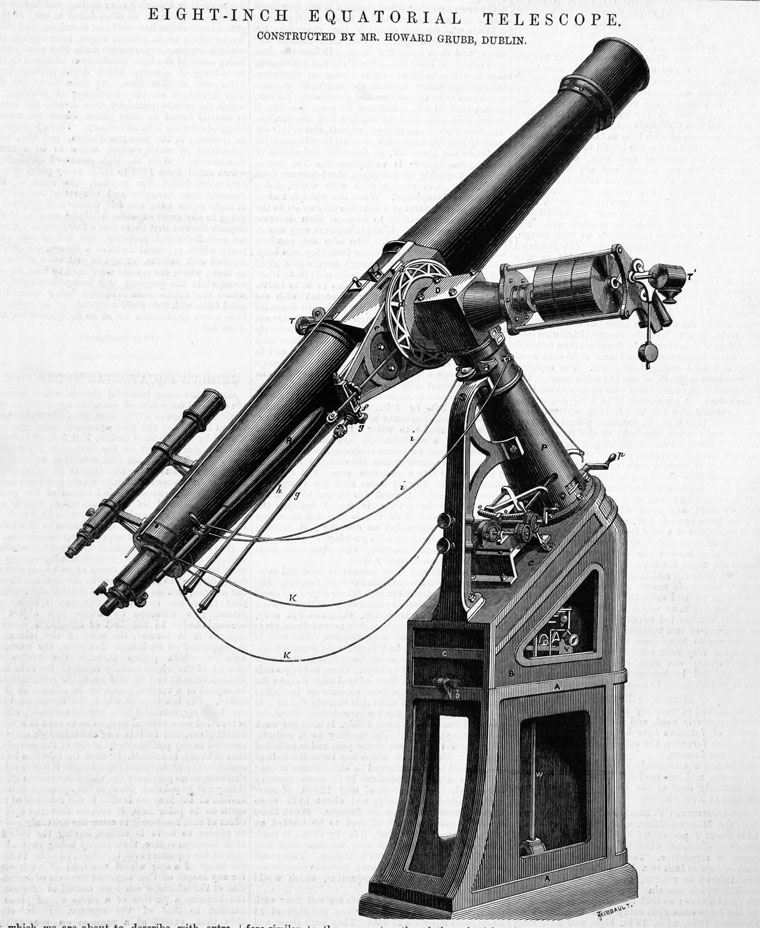 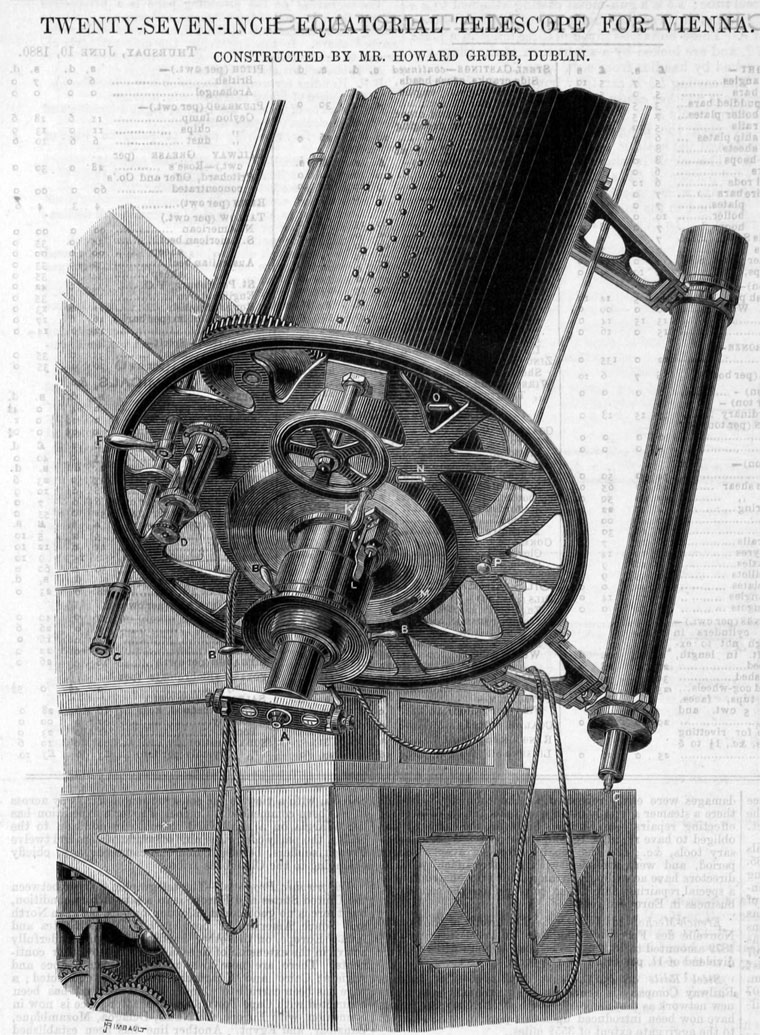 Grubb was an optical designer from Dublin, Ireland. He was head of a family firm that made large optical telescopes, telescope drive controls, and other optical instruments. He is also noted for his work to perfect the periscope and inventing the reflector sight.

1834 Born the son of Howard Grubb was one of eight children of Thomas, founder of the Grubb Telescope Co so Howard developed an early interest in optics.

After training to be a civil engineer, Howard joined his father's firm in 1864 and gained the reputation of a first class producer of telescopes.

In 1871 he married Mary Walker with whom he had six children.

In 1912 he was awarded the medal of the Society, only the third person to receive it.

The name of Sir Howard Grubb, whose death occurred at his home in Dublin on September 16, is probably- less known to the general public than that of many Viotorians of decidedly less eminence in the scientific world. The reason is that his life was practically devoted to the perfection of the astronomical telescope, an instrument of which the public has only the vaguest conceptions. To those better informed, however, his death will leave another vacant place in that distinguished band of scientists, who, like Lord Kelvin and Sir Charles Parsons, combined a pre-eminent degree of scientific knowledge with rare technical ability.

The reason for Sir Howard’s lifelong interest in telescopy will be understood when it is stated that his father, Thomas Grubb, was a telescope maker of repute. His business was established at the Charlemont Bridge Works, Dublin, early in the Nineteenth Century, and amongst other instruments, he was responsible for the Markree and Dunsink refractors, of 13-in. and 12-in. aperture respectively, and for the equipment of about 40 British magnetic stations. Howard Grubb was born in 1844, and after being educated privately and at Trinity College, Dublin, joined his father’s business, to which he succeeded in 1868. The most important work carried out previous to his assuming sole control was the construction of the Melbourne reflector. This instrument had an aperture of 4 ft., and when completed in 1867, was surpassed in size only by the Parsonstown 6-ft. speculum, built by the Earl of Rosse. Apart from its size, however, the Melbourne instrument was noteworthy in being the first large reflector to be mounted equatorially, thus preparing the way for later instruments of the same type. This instrument remained the largest in the Southern Hemisphere until the completion of the 5-ft. reflector at the Argentine National Observatory. The first important instrument made by the firm after the retirement of Thomas Grubb was the 27-in. refractor, erected at Vienna in 1878. Previous to this, however, an important departure had been made in the 15-in. Grubb instrument erected at Dun Echt in 1873. This was the first large instrument in which the declination circle could be read from the eye end. In the Vienna instrument, a further refinement was made which enabled the hour circle also to be read from the eye end, another novel feature being the electrical control of the clockwork for driving the telescope in right ascension. In its latest form, this control was described in Engineering, vol. cxxviii, page 288 et seq (1929) as applied to the 36-in. reflector for Edinburgh Observatory.

A mere list of the numerous instruments made by Sir Howard Grubb would be of little interest, but it may be mentioned that they include the 40-in. reflector for Simeis, South Russia, with a dome 32 ft. in diameter, the 24-in. reflector for Daramona, Ireland, and refractors erected in all parts of the world. Several of the instruments employed in the International Survey of the Heavens were made by the firm, these being 13-in. photographic refractors with 10-in. guiders. The instruments supplied included those for Greenwich, Oxford, Melbourne, Cork, Perth (Australia), Mexico, and Cape Town. In 1918, the works were removed to St. Albans in connection with the manufacture of periscopes for British submarines, and early in 1925, they were acquired by the late Sir Charles Parsons, the firm becoming Sir Howard Grubb, Parsons and Company. As our readers will probably be aware, Sir Charles was the son of the Earl of Rosse, whose 6-ft. speculum has already been referred to. New works were erected on a site at Walker Gate, Newcastle-on-Tyne, in association with the firm of Messrs. C. A. Parsons and Company, Limited. Reference has previously been made to the 36-in. reflector made at these works, and recently described in our columns.

Apart from telescopes and their mountings, Sir Howard Grubb’s interest in practical optics and applied science was shown in a variety of ways. It is now nearly sixty years since he was chairman of a committee to devise a system of electrical control for the clocks in his native town. In 1900, he patented an entirely new form of gun-sight, and he took an active part in the development of periscopes, micrometers, stereoscopes, heliostats, and a variety of other instruments. He was intensely patriotic, and when the Boyle medal was conferred upon him by the Royal Dublin Society in 1912, he took the opportunity to refute the prevalent idea that Irish workmen were incapable of turning out as accurate work as those of other countries where technical education was more advanced. He stated that, so far as his experience went, Irishmen, if properly instructed and given a fair chance, were just as capable as others, and although he had employed men of many nationalities, 95 per cent, of his then workers were Irish. On the same ocoasion, Sir Howard expressed regret that the increasing stress of living tended to restrict opportunities for leisurely discussion of points of scientific interest, and deplored that the meetings of the Society were being more and more occupied by the formal reading of papers. His claims for the competency of Irishmen would hardly be now disputed, but his comments on the increasing formality of the Royal Dublin Society’s meetings might be aptly applied to those of oertain august bodies to-day. While it is more fully realised that discussion may well constitute the most important part of the proceedings, such discussion is usually very formal, and the opportunities pleaded for by Sir Howard, of informal intercourse after the meetings to strengthen personal relationships, are becoming more and more rare.

Sir Howard Grubb’s association with the Royal Dublin Society commenced in 1869, and practically only terminated with his death. He received the Cunningham gold medal in 1881, and the Boyle medal, as stated, in 1912. He was a governor of the society for many years. His communications, in the form of scientific papers, are too numerous to mention in detail. He was appointed scientific adviser to the Commissioners of Irish Lights in 1913. He was a Fellow of the Royal Society, a Fellow of the Royal Astronomical Society, and an honorary member of the Royal Institute of Engineers of Ireland. He held the honorary degree of Master of Engineering, University of Dublin, and was created a knight in 1887."