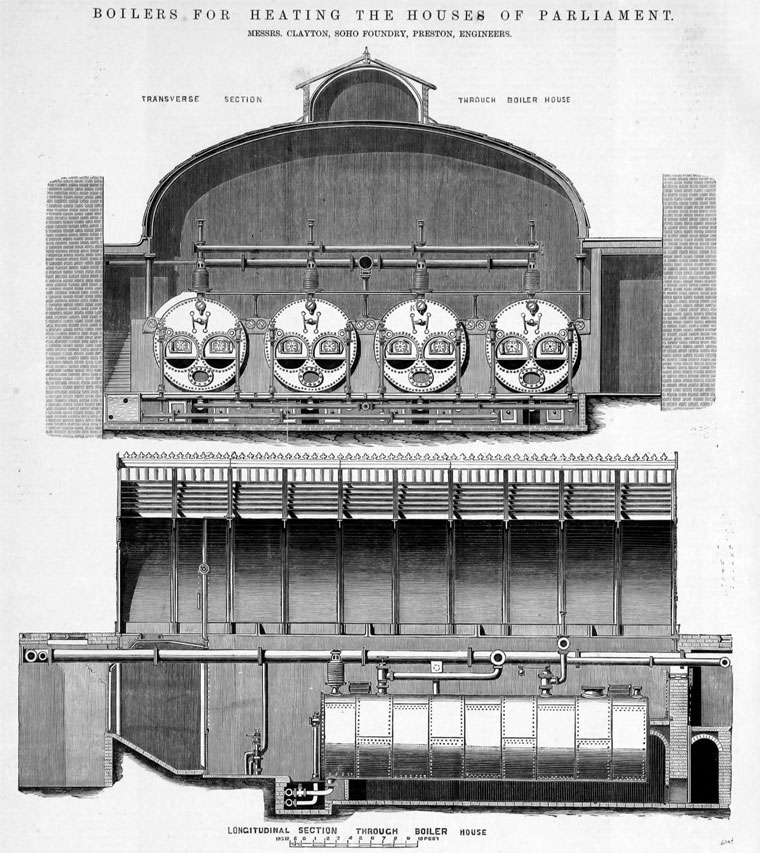 1870. Boilers for Heating the Houses of Parliament. Joseph Clayton of the Soho Foundry, Preston.[1]

1834 A great fire destroyed the Palace of Westminster

1835 a Royal Commission was appointed to study the rebuilding of the Palace and a heated public debate over the proposed styles ensued.

The neo-classical style, similar to that of the White House in the United States, was popular at that time. However, as the design was associated with revolution and republicanism while the Gothic style was felt to embody conservative values, the commission announced in June 1835 that the style of the buildings should either be Gothic or Elizabethan.

The commissioners also decided not to retain the original layout of the old palace, although the new design should incorporate the surviving Westminster Hall, the Undercroft Chapel and the Cloisters of St Stephen's.

1836 the Commissioners organised a public competition to design a new Palace in either of these styles. They received 97 entries, each identifiable only by a pseudonym or symbol. From these, the commissioners chose four, of which they were unanimous in preferring entry number 64 which bore the emblem of the Portcullis. This was the entry submitted by Charles Barry, who had proposed a Gothic-styled palace in harmony with the surviving buildings.

1840 The construction of the new Palace began in 1840. While Barry estimated a construction time of six years, at an estimated cost of £724,986, the project in fact took more than 30 years, at a cost of over £2 million. The first stone of the building was laid by Barry's wife on 27 August 1840. The site was extended into the river by reclaiming land, to a total of about eight acres.

While construction was underway the House of Commons temporarily sat in the repaired Lesser Hall and the House of Lords used the Painted Chamber.

1847 The House of Lords first sat in their new purpose-built chamber in 1847 and the House of Commons in 1852 (at which point Charles Barry received a knighthood). Although much of the rest of the building was completed by 1860, construction was not finished until a decade afterwards.