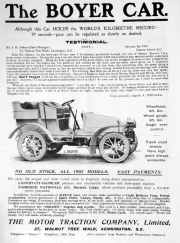 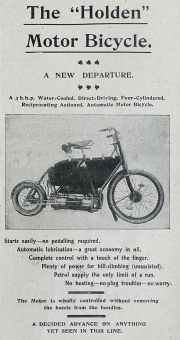 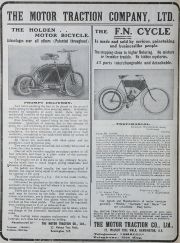 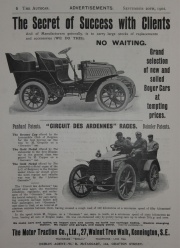 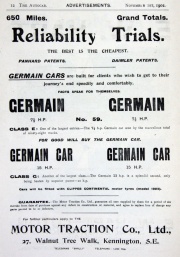 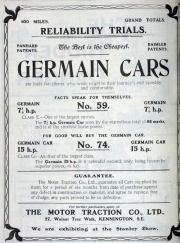 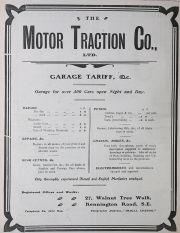 1899 The company was granted a licence to the Daimler patents in England by the British Motor Syndicate Ltd[3].

1899 First motor bus service in London from Kennington to Victoria, operated by the Motor Traction Company Limited, but the service was short lived[4].

1901 Purchased the old works of Mackenzie and Co (Coachbuilders).[5]

1902 Agent for Germain and Boyer cars.

1902 New premises to replace those destroyed by fire in October 1899. These premises were formerly those of the Mackenzie's Carriage Works. Images. [9]

1906 Granted exclusive licence to certain Daimler patents as a result of negotiations involving Mercedes Daimler Motor Co Ltd and a Mr Edge[11]. The London Daimler Company Ltd was formed with the intention of taking over these rights but the use of the name Daimler was challenged by Daimler Motor Co (1904) Ltd who succeeded in the Supreme Court in defining their rights to use the Daimler name[12].

(Patented in 1894, the Holden was the world's first four-cylinder motorcycle).

It used the same inefficient design that Pennington, Hildebrand and Wolfmuller [1] and others used, with the connecting rods directly driving the rear wheel.

1897 The motorcycle was first produced in air-cooled form. The horizontal cylinders drove the rear wheel directly and the camshaft was driven from this by chain and worm gear. It had coil ignition, a surface carburettor and geared pedals for the front wheel.

1899 The version for that year had water cooling and went into production, but the result was heavy and expensive.

1901 November. 'The Holden motor-cycle was invented several years ago by Lieutenant-Colonel Holden, R. A., Superintendent of the Woolwich Arsenal, but has only just become a commercial article. Its price is rather high, but it is a more scientific vehicle than the type which consists of an ordinary safety with a motor added. The Holden motor has four cylinders, and drives directly on to the back wheel by cranks, in locomotive fashion.'[14]

1902 By now the Holden was an obsolete relic of a by-gone age so production ceased.