Grace's Guide is the leading source of historical information on industry and manufacturing in Britain. This web publication contains 148,536 pages of information and 233,961 images on early companies, their products and the people who designed and built them. 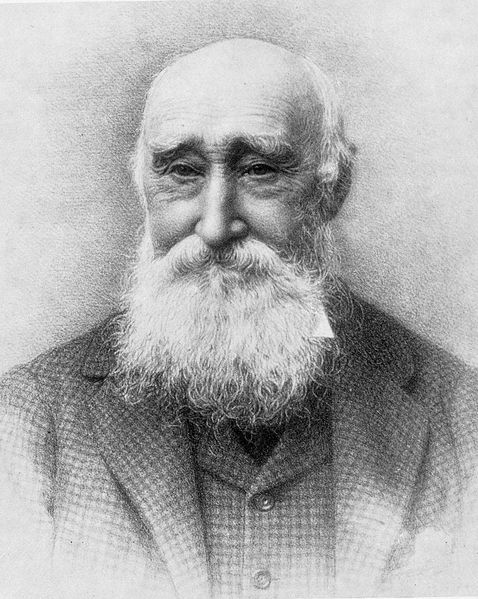 Holbrook Gaskell (1813–1909) was a British industrialist, art and plant collector.

1813 March 5th. Born in Wavertree, Liverpool. He was the eldest son of Roger Gaskell, a sailcloth manufacturer, from his marriage to his cousin Anne Hunter. He was baptised on the 11 April 1813 at the Paradise Street Unitarian Chapel in Liverpool. He was the cousin of the Unitarian minister William Gaskell, husband of the novelist Mrs Gaskell and was from a Unitarian family himself. He was educated privately at a school in Norton near Sheffield

1827 Worked as an apprentice clerk in the firm of Yates, Cox and Co, who were iron merchants and nail makers in Liverpool.

1836 Formed a partnership with James Nasmyth which led to the creation of Nasmyth, Gaskell and Co and the building of the Bridgewater Foundry at Patricroft near Manchester. Nasmyth recalls this in his biography "He had served his time at Yates and Cox, iron merchants, of Liverpool. Having obtained considerable experience in the commercial details of that business, and being possessed of a moderate amount of capital, he was desirous of joining me, and embarking his fortune with me. He was to take charge of the counting-house department, and conduct such part of the correspondence as did not require any special knowledge of mechanical engineering. I am much pleased by the frank and friendly manner of Mr. Gaskell, and I believe that the feeling between us was mutual. We continued working together for a period of sixteen years; and I believe Mr. Gaskell had no reason to regret his connection to the Bridgewater Foundry".

1841 Married Frances Ann Bellhouse, who was the daughter of Henry Bellhouse of Manchester and niece of David Bellhouse, the Manchester builder that Nasmyth and Gaskell had contracted during the initial building of the Patricroft site. Over the next 13 years they had 8 children, 5 daughters and three sons.

1855 Entered into a second partnership with the industrial chemist Henry Deacon, who had worked with him in Nasmyth, Gaskell and Co. Nasmyth wrote "In course of time the alarming symptoms [of his illness] departed, and he recovered his former health. He then embarked in an extensive soda manufactory, in conjunction with one of our pupils, whose taste for chemistry was more attractive to him than engine-making. A prosperous business was established, and at the time I write these lines [1885] Mr. Gaskell continues a hale and healthy man, the possessor of a large fortune, accumulated by the skillful manner in which he has conducted his extensive affairs."

Gaskell, Deacon and Co's plant in Widnes was set up to develop the ammonia-soda process that Deacon believed he could make successful. However, after various setbacks, Gaskell could not see this making money and he forced Deacon to abandon the venture. Instead they established one of the largest and most successful Leblanc factories in Widnes. Gaskell's three sons, Holbrook II, James Bellhouse and Frank all became partners in the company.

1860 When the governments of Britain and France formed a treaty to raise duties on materials made from salt, Holbrook Gaskell went with Edmund Knowles Muspratt to Paris to negotiate terms for the manufacturers. Gaskell remained a director of the company until 1890 when it became part of the United Alkali Co. He became vice president and later president of that company.

Gaskell served as a magistrate in Widnes, was an active liberal and a member of the Liverpool Reform Club, supporting causes including the extension of the franchise. He endowed a chair of botany and provided chemistry laboratories at University College, Liverpool. He paid for public baths in Widnes and supported convalescent homes in Heswall and Southport. He was involved with the Liverpool Daily and Weekly Post and Echo and when this amalgamated with the Liverpool Mercury in 1904 he became its chairman. He owned a fine art collection which included works by Turner and Constable which was loaned to the Walker Art Gallery in 1885.

With his accumulated wealth Holbrook Gaskell moved to Woolton Woods in Much Woolton. He became a renowned collector of orchids. Frederick Sander, an orchid dealer, received a new Cattleya species in 1883 from his collector Seidl and named it Cattleya gaskelliana after Holbrook Gaskell in recognition of a good customer and someone who "by great diligence has acquired one of the finest collections of orchids in the North of England".

He was buried in the churchyard of Cairo Street chapel, Warrington. The estate of Woolton Woods passed to his sons who sold it to Col James P Reynolds, who in turn sold it to Liverpool City Council

. . . the great inventor set up in business at Patricroft, the title of the firm being Nasmyth, Gaskell, and Co. . . . [much more]