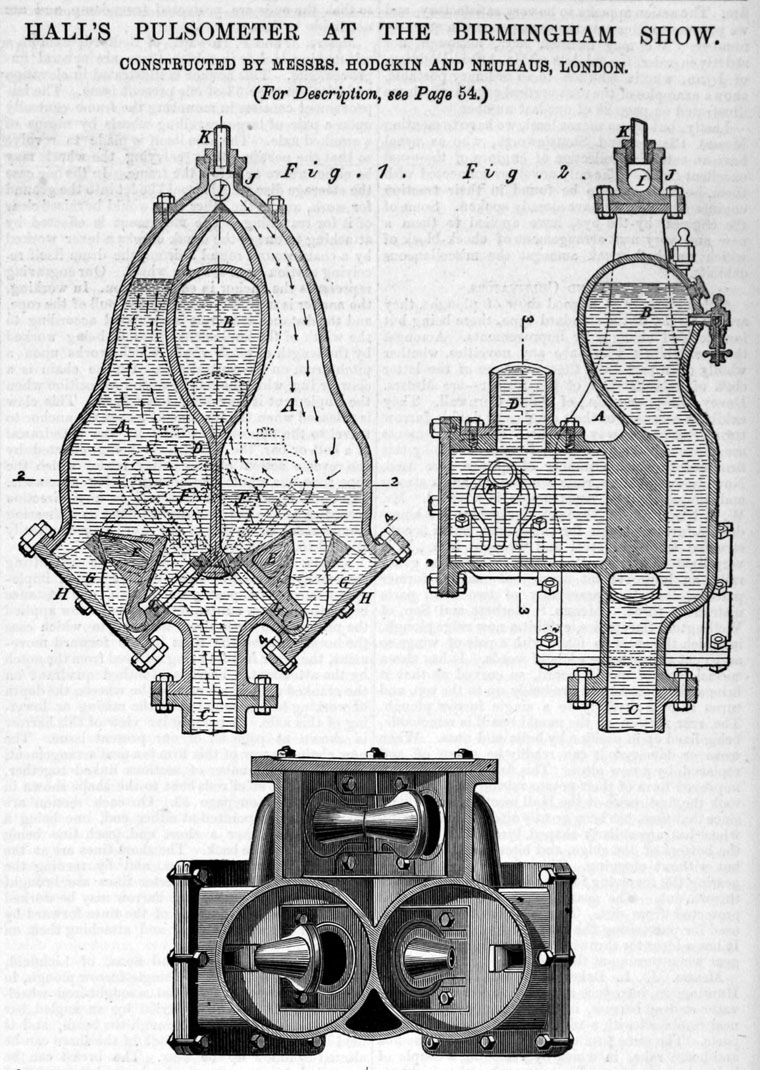 1876. Hall's Pulsometer at the Birmingham Show

1877. Pulsometer at the Normanton Quarry.

1872 The Pulsometer steam pump, a piston-less pump, was invented by American Thomas Hall. The invention may have been inspired by the Savery steam pump invented by Thomas Savery. Around the turn of the century, it was a popular and efficient pump for quarry pumping.

1875 John Eliot Hodgkin with Mathias Neuhaus, bought the patent rights of the Pulsometer and it was introduced to the market soon thereafter. This extremely simple pump was made of cast iron, and had no pistons, rods, cylinders, cranks, or flywheels. It operated by the direct action of steam on water. The mechanism consisted of two chambers. As the steam condensed in one chamber, it acted as a suction pump, while in the other chamber, steam was introduced under pressure and so it acted as a force pump. At the end of every stroke, a ball valve consisting of a small rubber ball moved slightly, causing the two chambers to swap functions from suction-pump to force-pump and vice versa. The result was that the water was first suction pumped and then force pumped.

The pump ran automatically without attendance. It was praised for its "extreme simplicity of construction, operation, compact form, high efficiency, economy, durability, and adaptability". Later designs were improved upon to enhance efficiency and to make the machine more accessible for inspection and repairs, thus reducing maintenance costs.

1876 The company showed the American Pulsometer pump at the Royal Agricultural Show at Birmingham. Also showed range of their own pumps. [1]