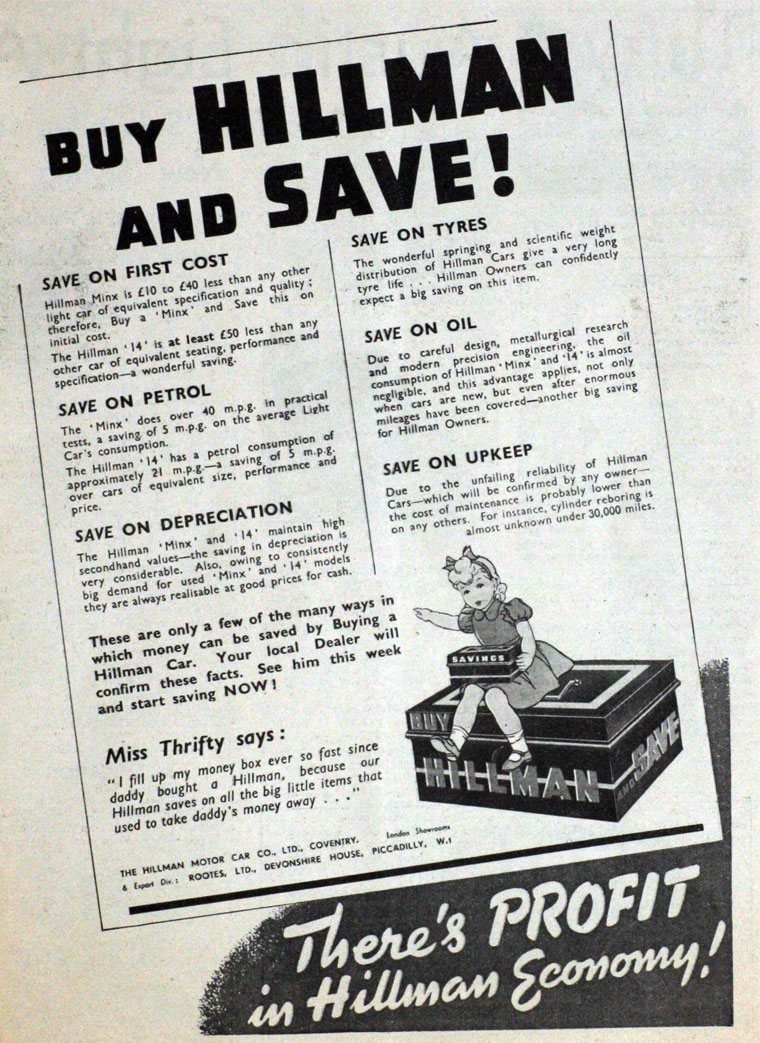 Hillman Motor Car Co Ltd of Ryton-on-Dunsmore, Coventry was a manufacturer of cars and motorcycles.

In the early 1870's he founded Hillman, Herbert and Cooper, which later became the Premier Cycle Co.

1871 Starley was joined in business by William Borthwick Smith as Smith, Starley and Co at St. Agnes Lane, Hales Street (from where they later moved to Ariel Works, Spon Street).

1872 The partnership of Smith, Starley and Co with William Hillman was dissolved when Hillman left [1] 11th December 1872. Starley continued to make the "Europa" sewing machine and the "Ariel", the first practical penny-farthing cycle.

1876 Patent. '3197. And to William Hillman, of the firm of Hillman & Herbert, Machinists, of Coventry, in the county of Warwick, for the invention "improvements in bicycles, and in machinery or apparatus for manufacturing bicycle and other wheels."'[2]

1880 Hillman and Herbert became Hillman, Herbert and Cooper which became known as the world's largest manufacturer of cycles, with patent innovations swelling the sales revenues.

1887 New company formed: Auto Machinery Co; this pioneered the mass production in Britain of ball and roller bearings, and the energetic Hillman established a variety of valuable patents.

1891 Hillman, Herbert and Cooper was sold to the Premier Cycle Co, which employed 600 people and produced cycles at the rate of over 100 a day.

1905 Hillman's enthusiasm for motor races led him to build his own car, with the intention of winning the Isle of Man tourist trophy.

1907 The Hillman-Coatalen Motor Car Co was set up by William Hillman with Louis Coatalen from Humber.

1928 November. Formation of the Humber Combine by merging Hillman into that company. The 2 factories were on adjacent sites with some complementary facilities - Humber had good foundries but few stamping facilities whilst Hillman had no foundries but good stamping facilities[7]. Head of the new concern was Lieut-Col. J. A. Cole (MD of Humber), Captain S. Wilkes (Joint MD of Hillman) and Captain J. Black (Joint MD of Hillman). Also on board were S. Brotherhood and Sir Henry McMahon. Rootes who had handled the export sales, provided the cash and owned 60% of the shares. [8] [9]

1931/2 Hillman and Humber were taken over by the Rootes Group. Hillman went on to become the dominant brand within the Rootes Group empire, alongside Humber, Sunbeam and Singer.