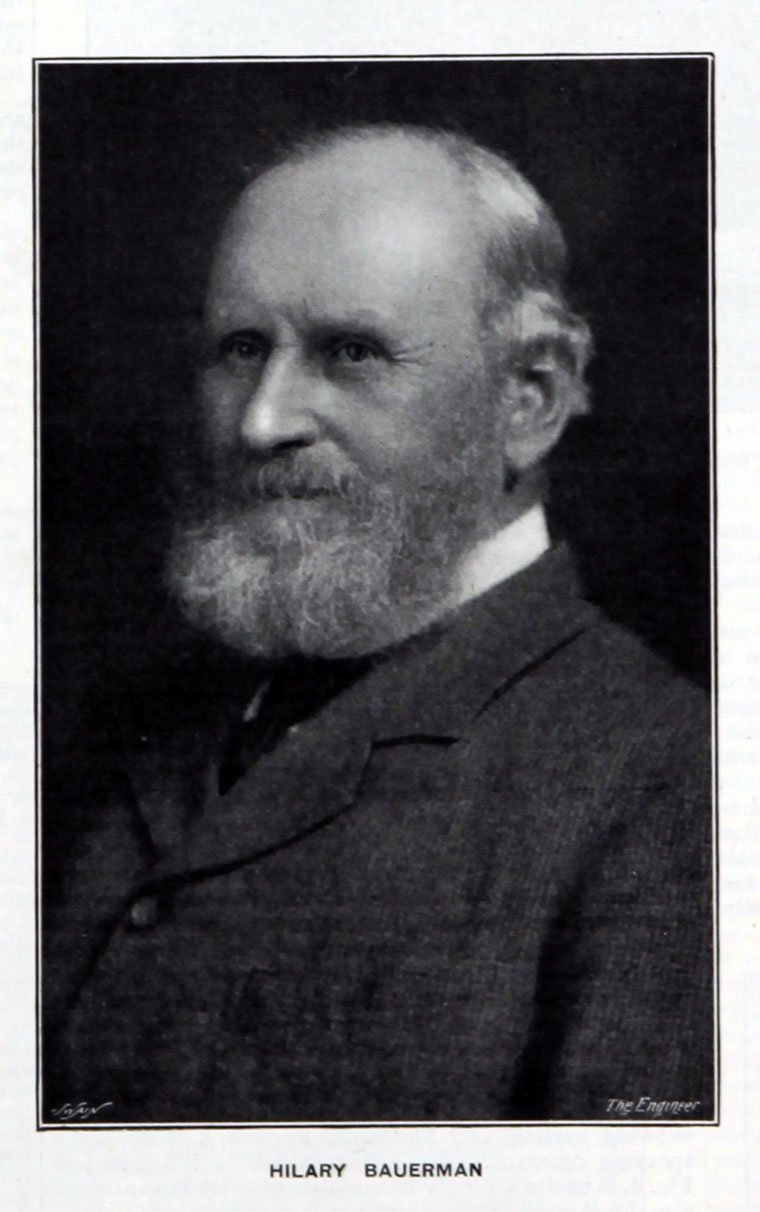 HILARY BAUERMAN, who died in London on the 5th December, 1909, aged 74, was widely recognized as a leading authority on metallurgy and mineralogy.

Beginning his career in 1855 as assistant geologist to the Geological Survey of Great Britain, he was subsequently employed on the North American Boundary Commission and on surveys and explorations in all parts of the world.

For nearly 20 years he was Professor of Metallurgy at the Royal Artillery College, Woolwich, retiring in 1906. His services were frequently requisitioned by various international and public bodies, and as an author he made many valuable contributions to scientific and technical literature.

In 1897 he was awarded the Howard Quinquennial Prize of The Institution in recognition of his work on the metallurgy of iron.

Professor Bauerman was elected an Associate Member on the 2nd December, 1873.

. . . among the foremost authorities on mineralogy and metallurgy of his time . . . [much more]

HILARY BAUERMAN died at his residence in Balham on Sunday morning, December 5, at the age of seventy-six. He had been ailing for some time previous to his death, and had, indeed, been seriously ill for nearly three months prior to that event, the immediate cause of which was heart failure. Mr. Bauerman — or, to accord him the title to which he was entitled by reason of his professorship at the Ordnance College, Woolwich, Professor Bauerman — was one of the most distinguished and valuable members of the Iron and Steel Institute at whose meetings he was a constant attendant, and to whose Proceedings he made many valuable contributions. For his services to metallurgical science he was, in 1904, elected an Honorary Member of the Institute, and was, with one exception, the only British member so distinguished, the exception being H.R.H. the Prince of Wales, who accepted honorary membership of the Institute a year later. He received his technical education at the Royal School of Mines, of which he was one of the first Associates. This school - known originally as the Government School of Mines and of Science applied to the Arts - was opened in 1851 at the Museum in Jermyn Street, and Professor Bauerman was a student from the date of the opening until 1853. In the latter year he went to Germany, where he entered the Bergakademie of Freiberg in Saxony, and on completing his mining and metallurgical course he came back to England, and was shortly afterwards appointed on the staff of the Geological Survey of Great Britain as assistant geologist.

In 1858 he was appointed geologist to the North American Boundary Commission, and for the next five years was employed in the work of the Commission in Canada and the United States. The next twenty-five years of his life were spent in surveying and exploring the mineral resources of many parts of the world, and in this capacity he visited Arabia and Asia Minor, India, Brazil, North and South. Carolina, Colorado and Granada, Mexico and Peru, Michigan and Missouri, and—in Europe—Lapland, Portugal, Savoy, and Sweden. Indeed, during this period, and at subsequent times, he visited practically every country in Europe, and on various occasions reported on mineral lands in widely scattered areas. Amongst the official capacities in which he served may be mentioned those in which, on the recommendation of the late Dr. Percy, he reported on the Mineral Resources of Cyprus, and on the Production of Iron in India, respectively. The experience thus acquired qualified him in an exceptional degree for the positions he subsequently filled—as joint examiner in mining and metallurgy for the Science and Art Department from the year 1874 to 1879; as examiner in mining, Science and Art Department, from 1880 to 1898; as lecturer on metallurgy at Firth College, Sheffield, in 1883; and his final appointment in the year 1888 as Professor of Metallurgy at the Ordnance College, Woolwich, which post he held until 1906. As a teacher he was singularly successful, his wide experience, retentive memory, and logical habit of mind peculiarly qualifying him to lecture on those subjects which he had so thoroughly made his own. He was an accepted authority, not in this country alone, but also abroad, where his attainments were held in the highest esteem, alike in geology, metallurgy and chemistry, and in crystallography and mineralogy; and he was the author of numerous important text-books, amongst which may be enumerated a standard treatise on "The Metallurgy of Iron," and two works, entitled respectively "Descriptive Mineralogy" and "Systematic Mineralogy." He was also joint author with J. A. Phillips of the important work on "Elements of Metallurgy," which was for many years accepted as the standard work on the art of extracting metals from their ores. He was a constant contributor to technical magazines and newspapers, and wrote numerous papers, which were read before the various societies of which he was a member; in addition to which he was an accomplished linguist, and spoke English, French, and German with equal facility. These societies included the Institution of Civil Engineers, of which he became an Associate Member in 1873, and by which he was, in 1897, awarded the Howard Prize; and the Geological Society, of which he became a Fellow in 1863, and served on the Council for the years 1874-1880, 1881-1888, 1894-1898. He was also an Honorary Member of the Chemical Society, of the Metallurgical and Mining Society of South Africa, and of the Institution of Mining and Metallurgy, which in 1906 awarded him a gold medal. As a juror in mining and metallurgical exhibitions his services were naturally in universal request, and he served on the juries of the Paris Exhibition of 1878, the Inventions Exhibition in London in 1884, the Antwerp Exhibition of the same year, the Chicago Exhibition of 1893, the Paris Exhibition of 1900, the St. Louis Exhibition of 1904, and the Franco-British Exhibition of 1908.

In connection with the Collective Pig Iron Exhibit, shown in the British Section of the latter exhibition, he prepared a series of models illustrating the composition of typical brands of pig iron, and the proportions, by volume, of the constituents, sulphur, silicon, phosphorus, manganese, carbon, and iron, per ton, for each grade. Professor Bauerman was a warm supporter of the Iron and Steel Institute, on the Publication Committee of which he was appointed in 1905. He attended practically all the meetings of the last fifteen years, and took an active part in the discussion of papers, drawing upon his extensive experience for the elucidation of many abstruse points, and never failing to throw fresh light upon the subject under consideration. Amongst the papers which he contributed from time to time to the proceedings of the Institute are the following: " Iron and Steel at the Chicago Exhibition," "The Gellivare Iron Ore Mines," "Iron Ore Deposits of the Ural," "Iron and Steel at the Universal Exhibition, Paris," "Mining and Metallurgy at the St. Louis Exhibition," "The Erzberg of Eisenerz," and "Iron and Steel at the Franco-British Exhibition."

The funeral of Professor Bauerman took place on Friday, December 10, at Brookwood Cemetery, where, in accordance with his wishes, his remains were cremated. Most of the learned and scientific institutions and societies with which he was connected were represented at the funeral, which was also attended by a large number of those personal friends to whom his genial and kindly nature had greatly endeared him.