Grace's Guide is the leading source of historical information on industry and manufacturing in Britain. This web publication contains 137,331 pages of information and 220,558 images on early companies, their products and the people who designed and built them.

The Corliss Engine exhibited at the Paris Exhibition of 1867. 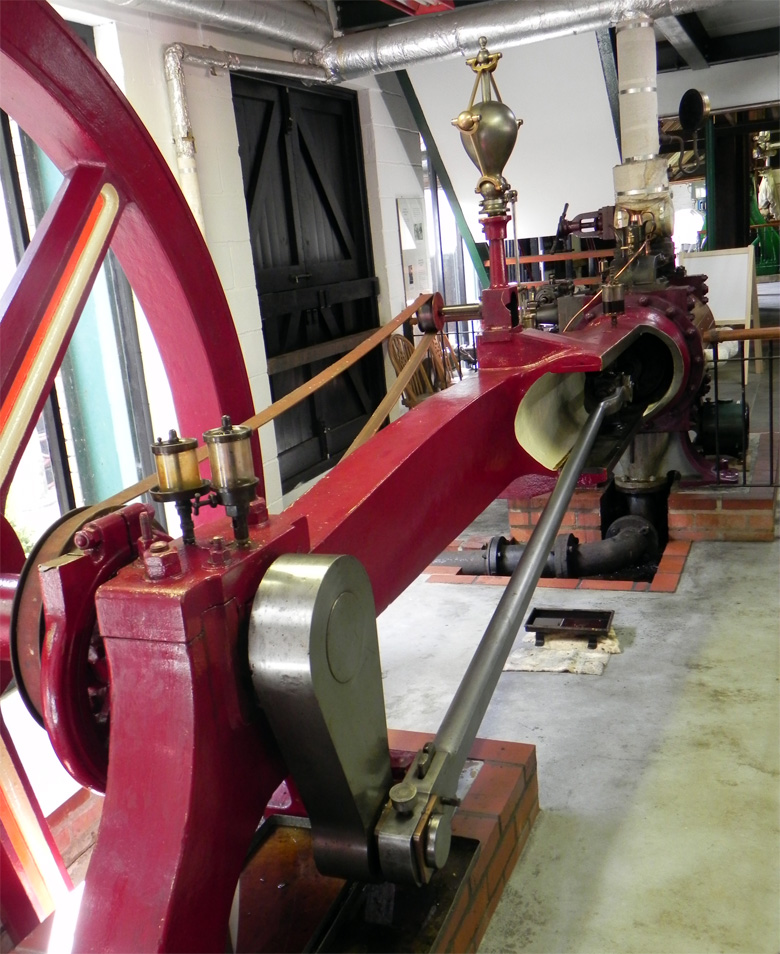 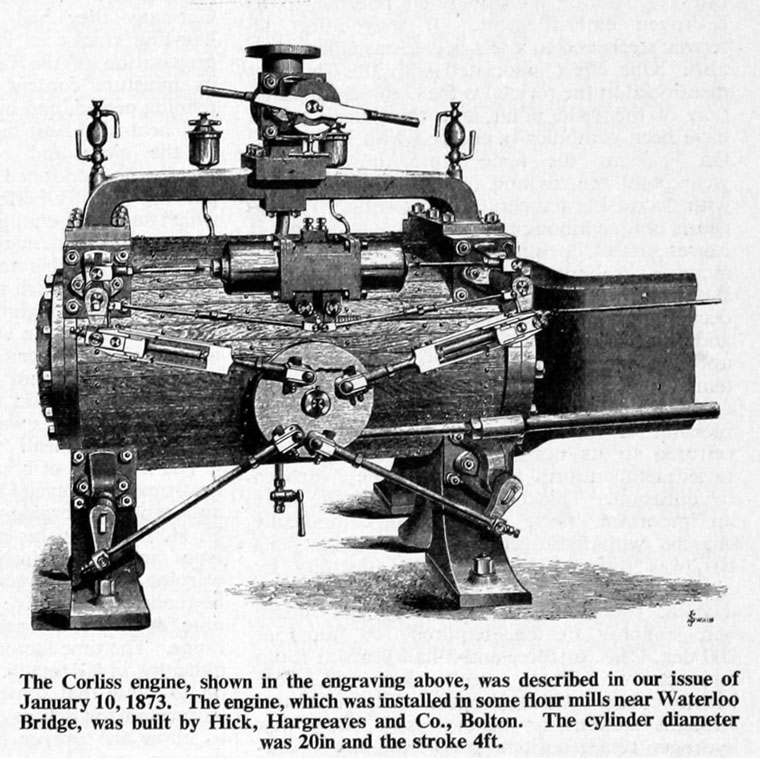 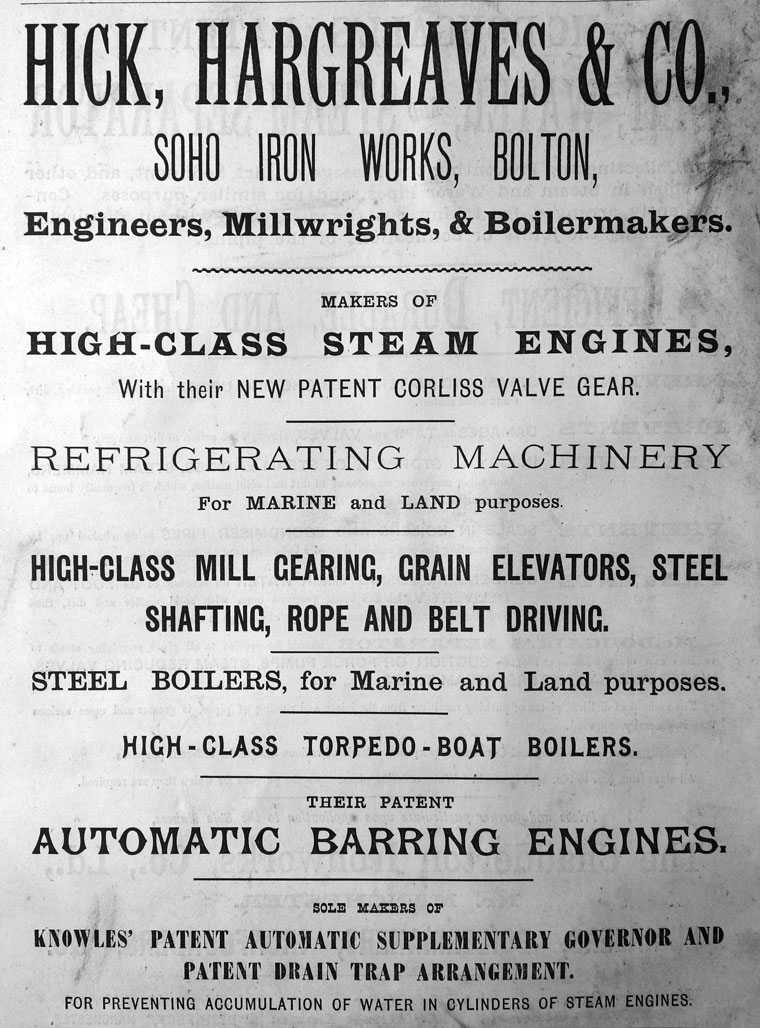 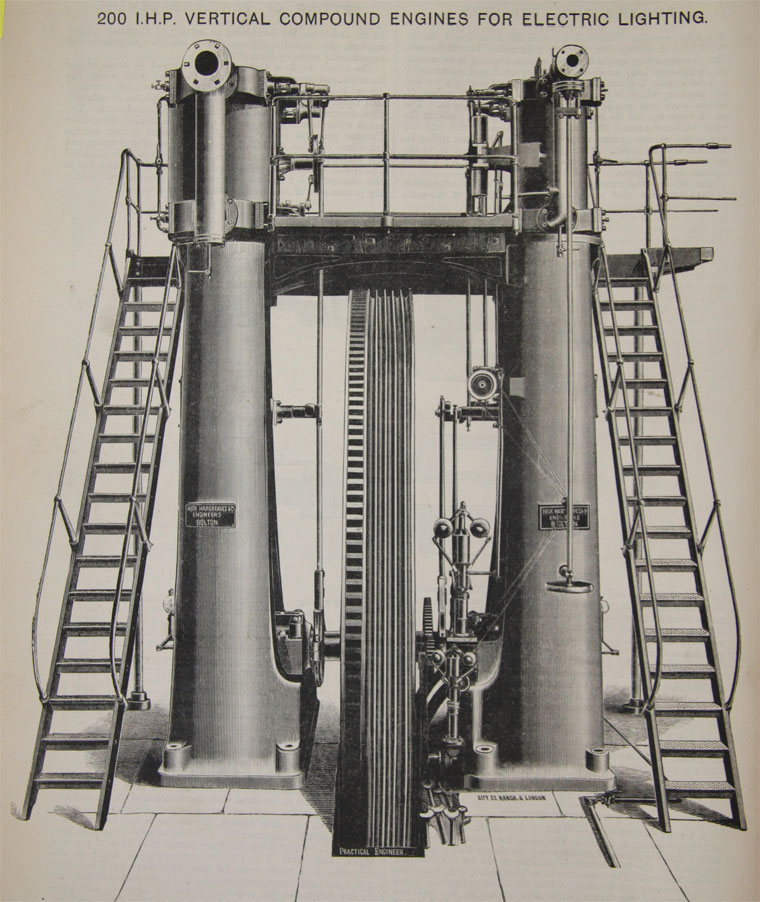 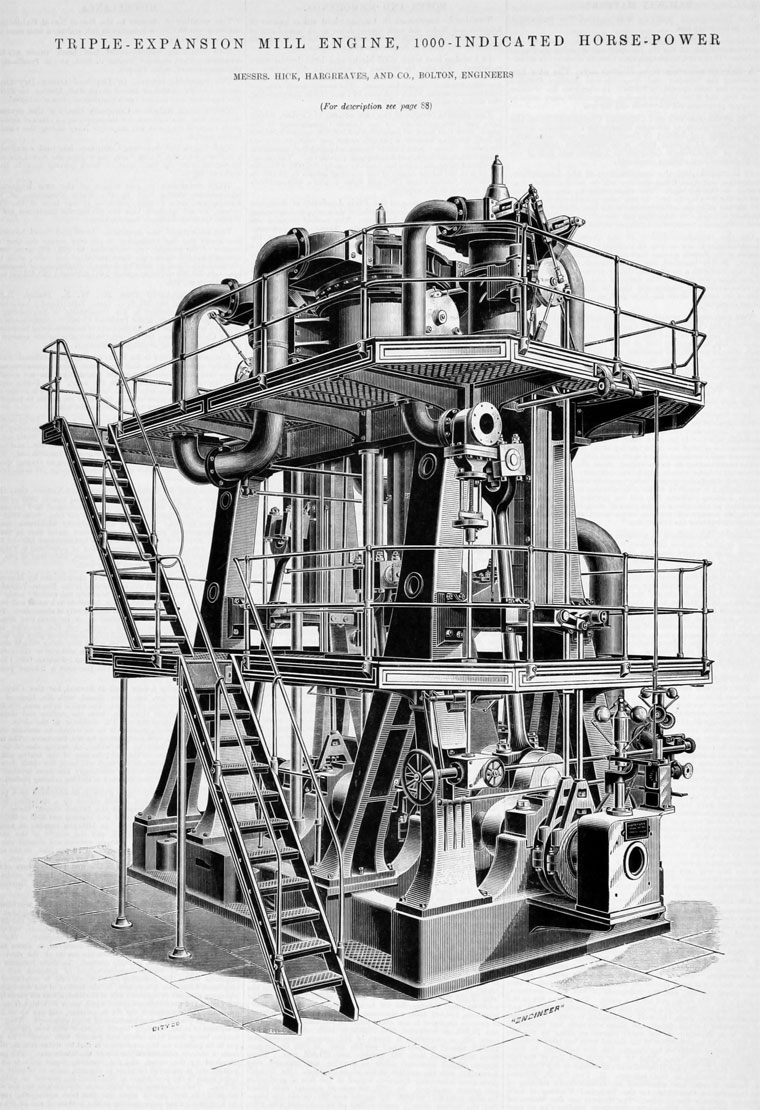 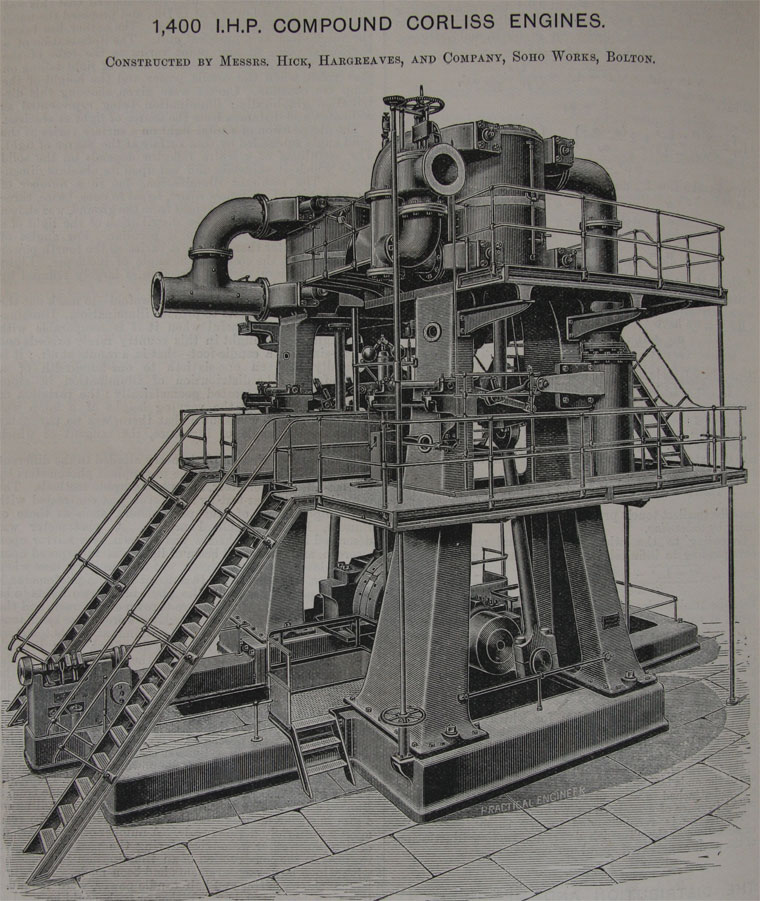 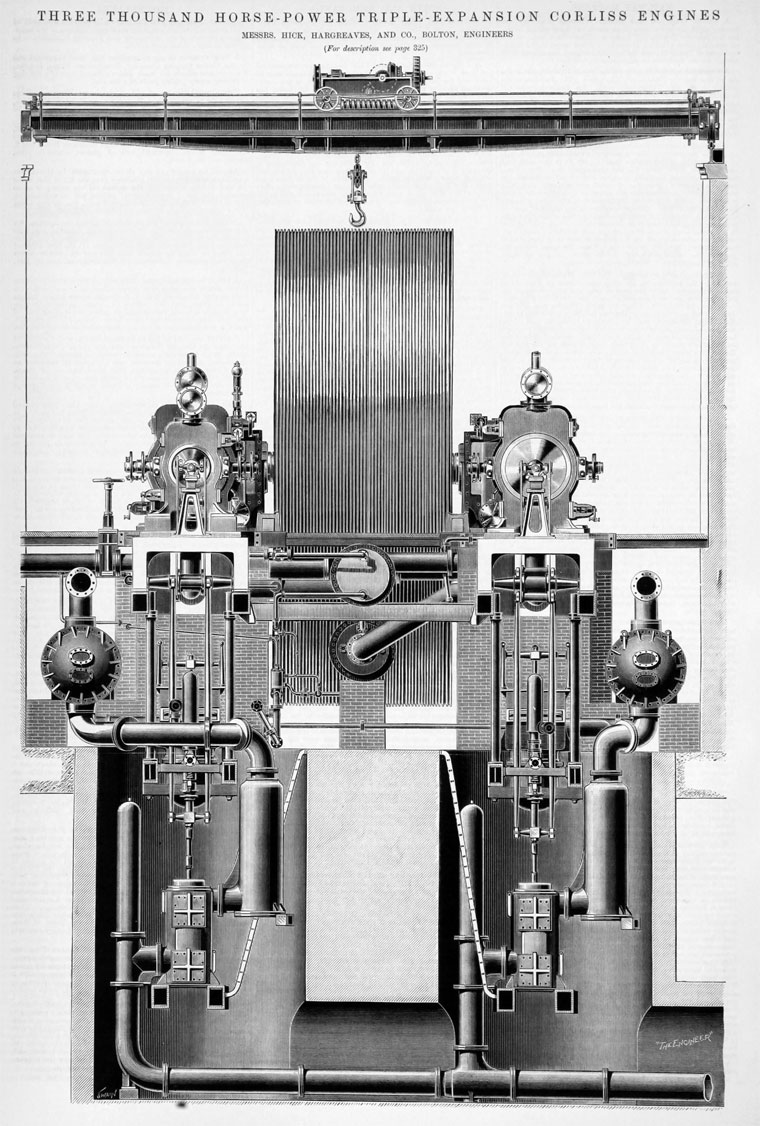 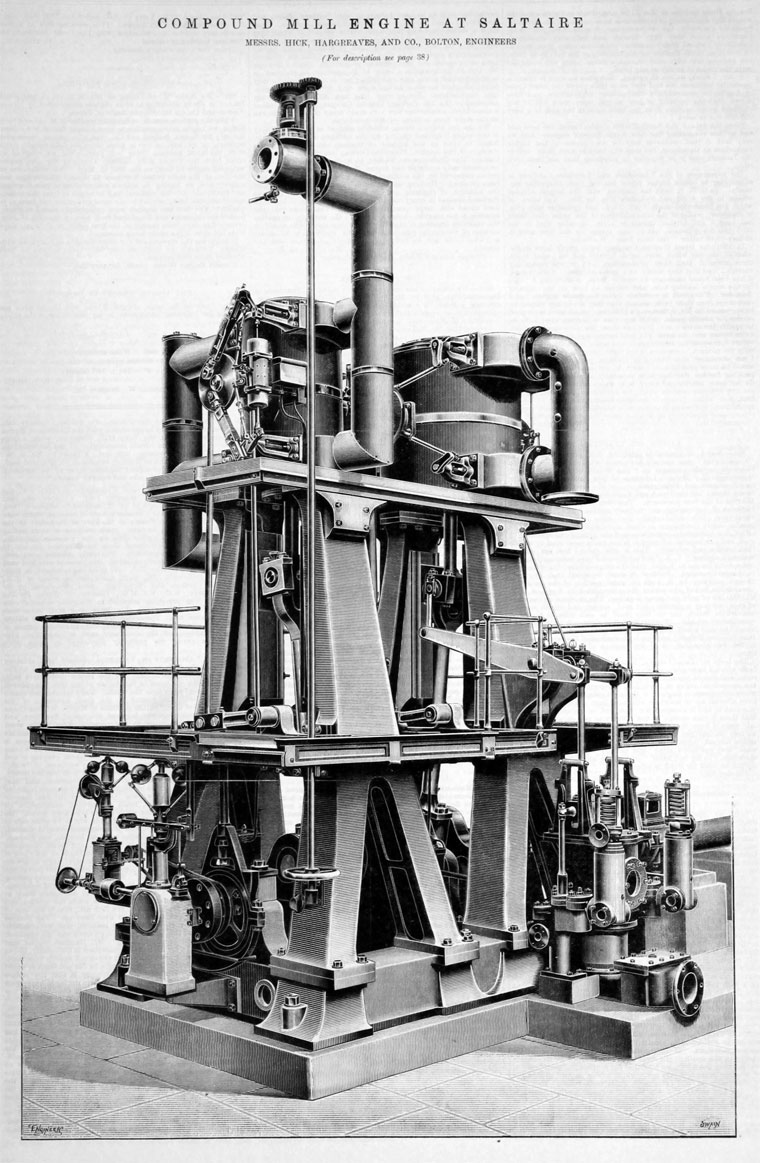 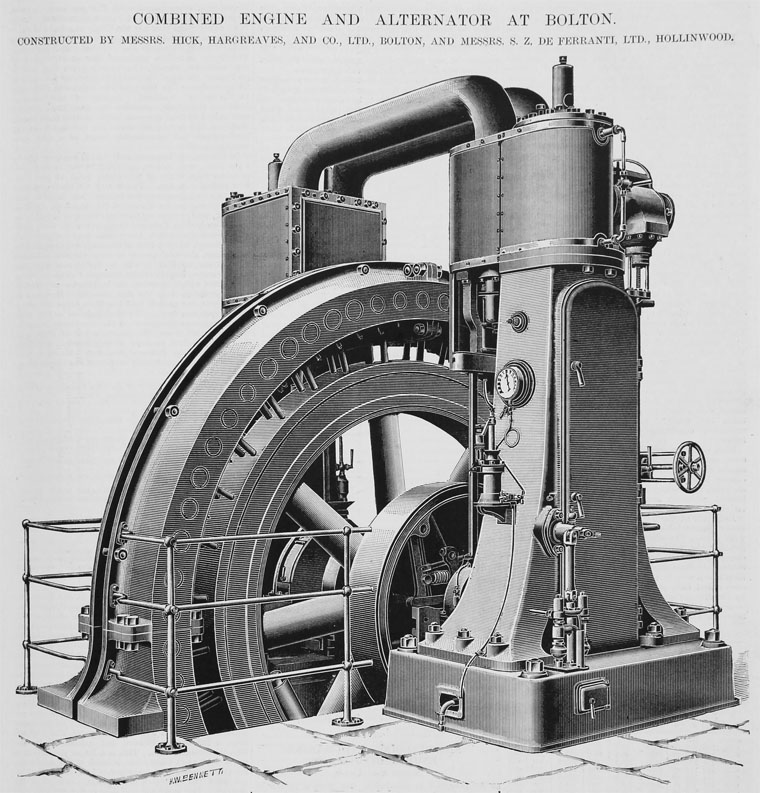 1897. Combined engine and alternator at Bolton. 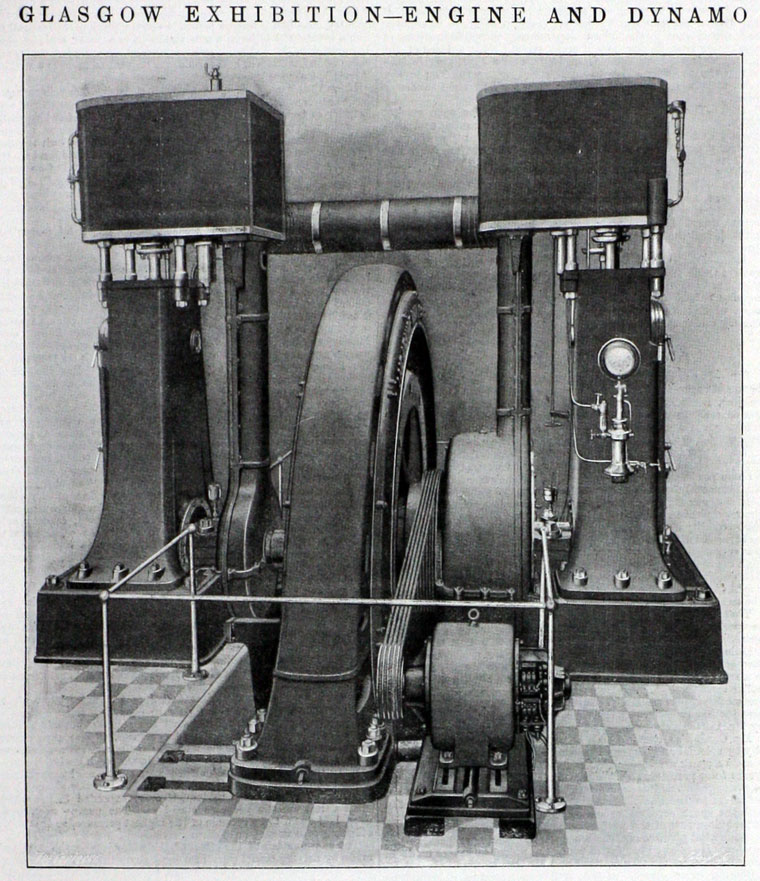 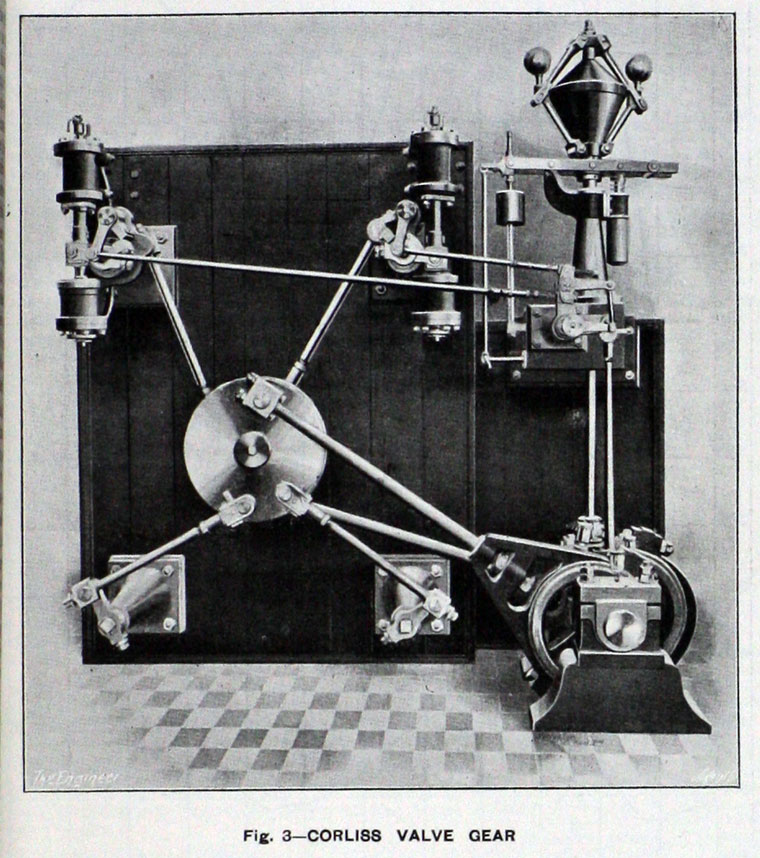 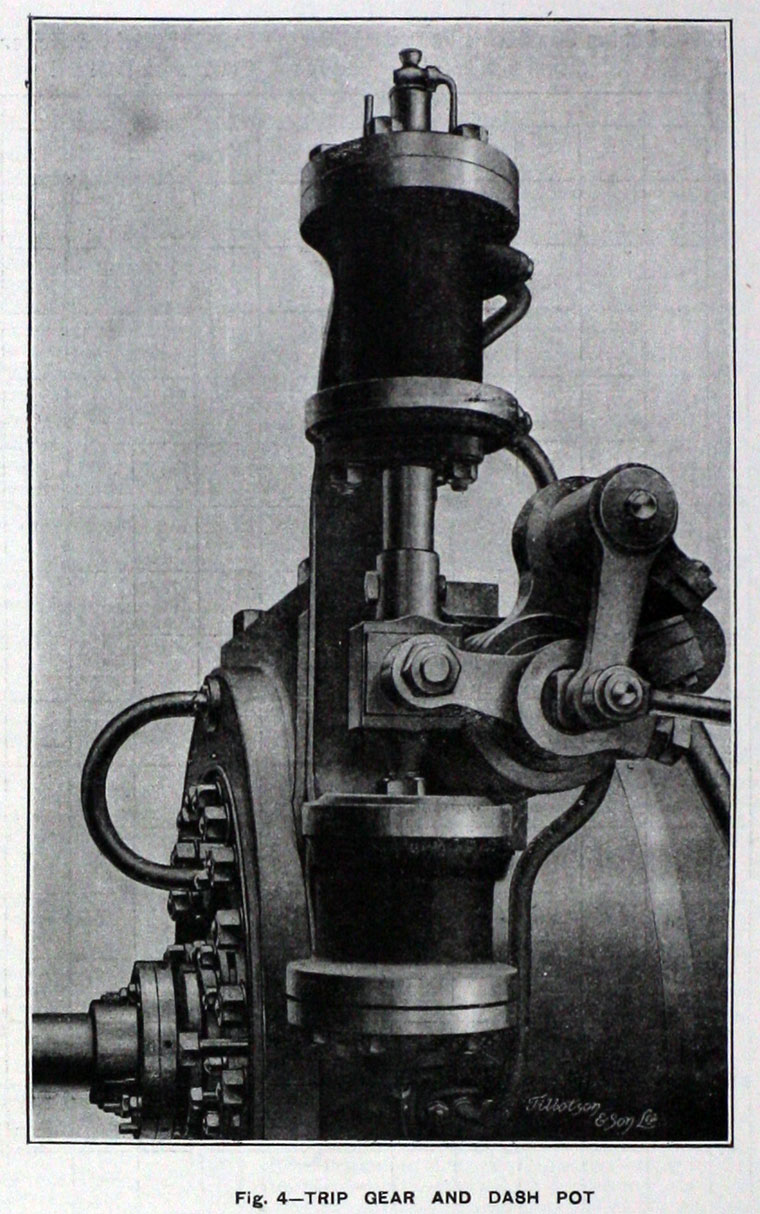 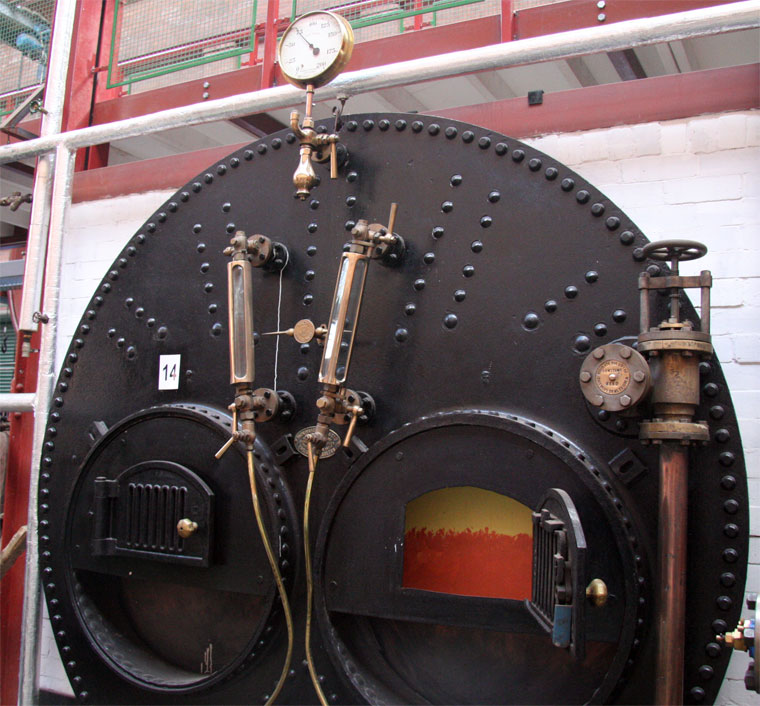 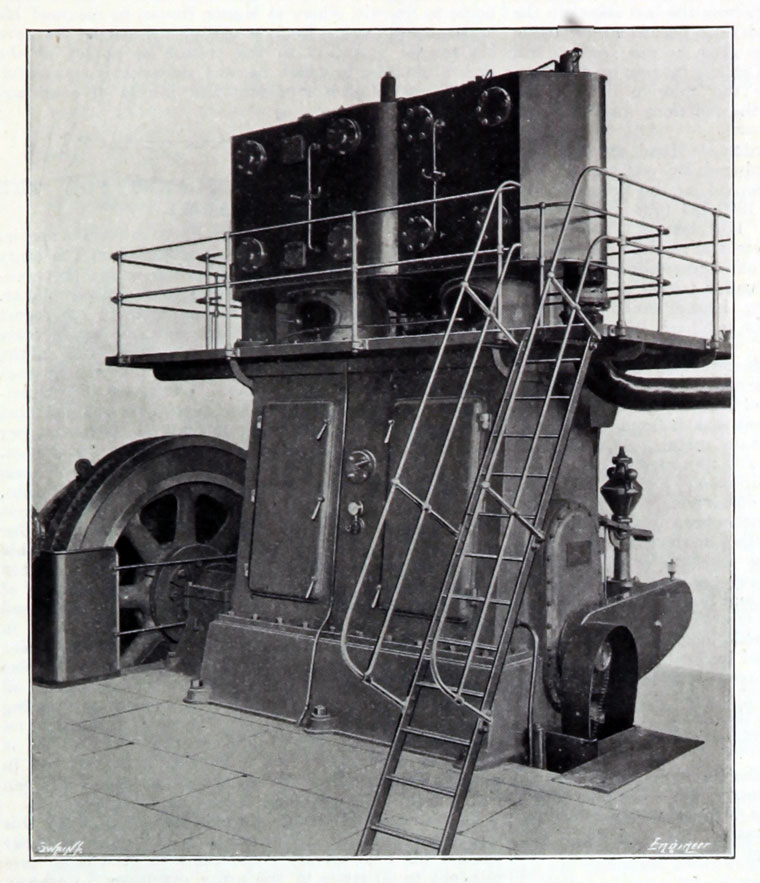 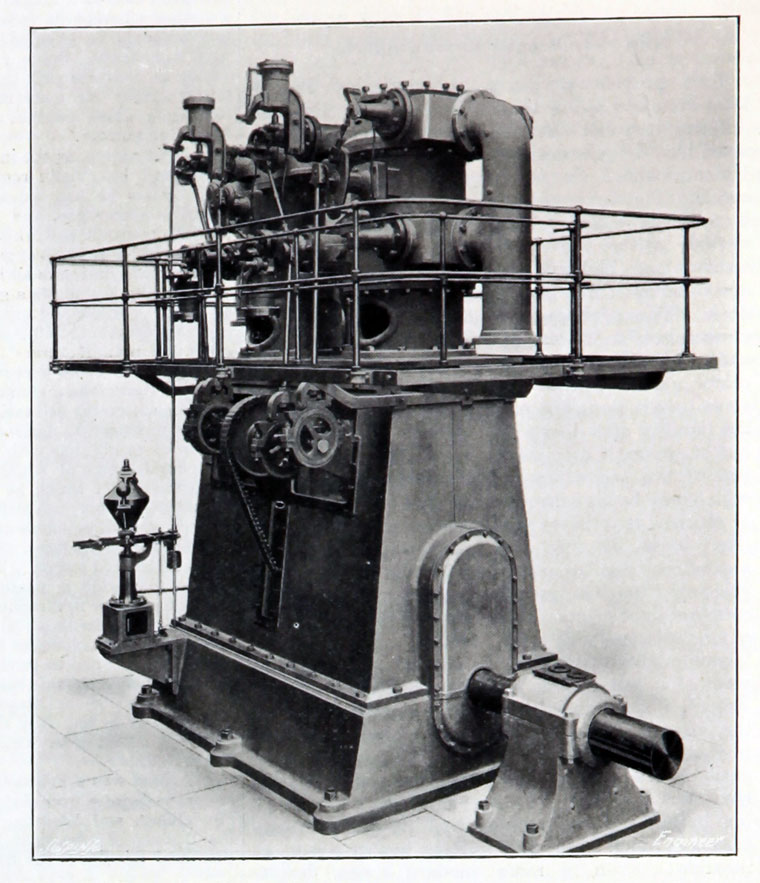 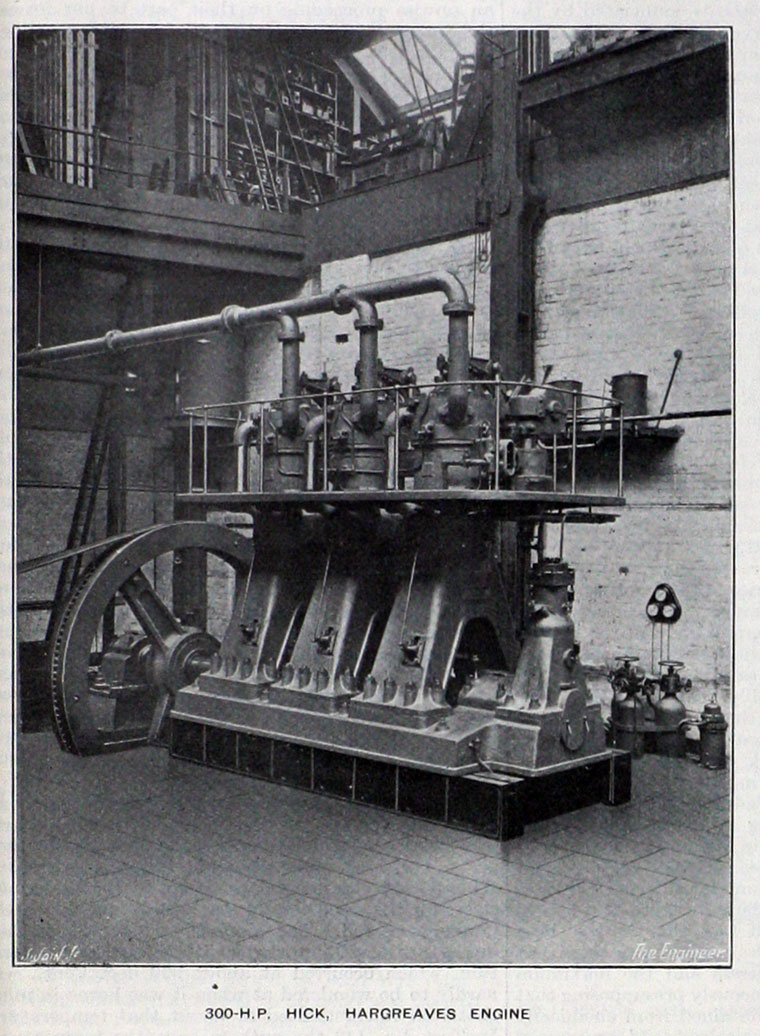 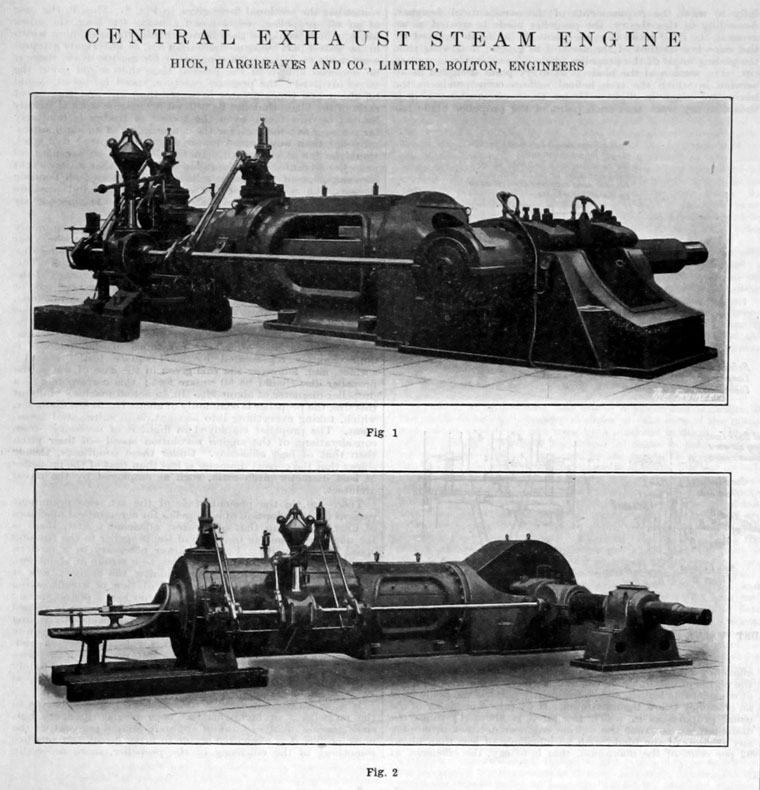 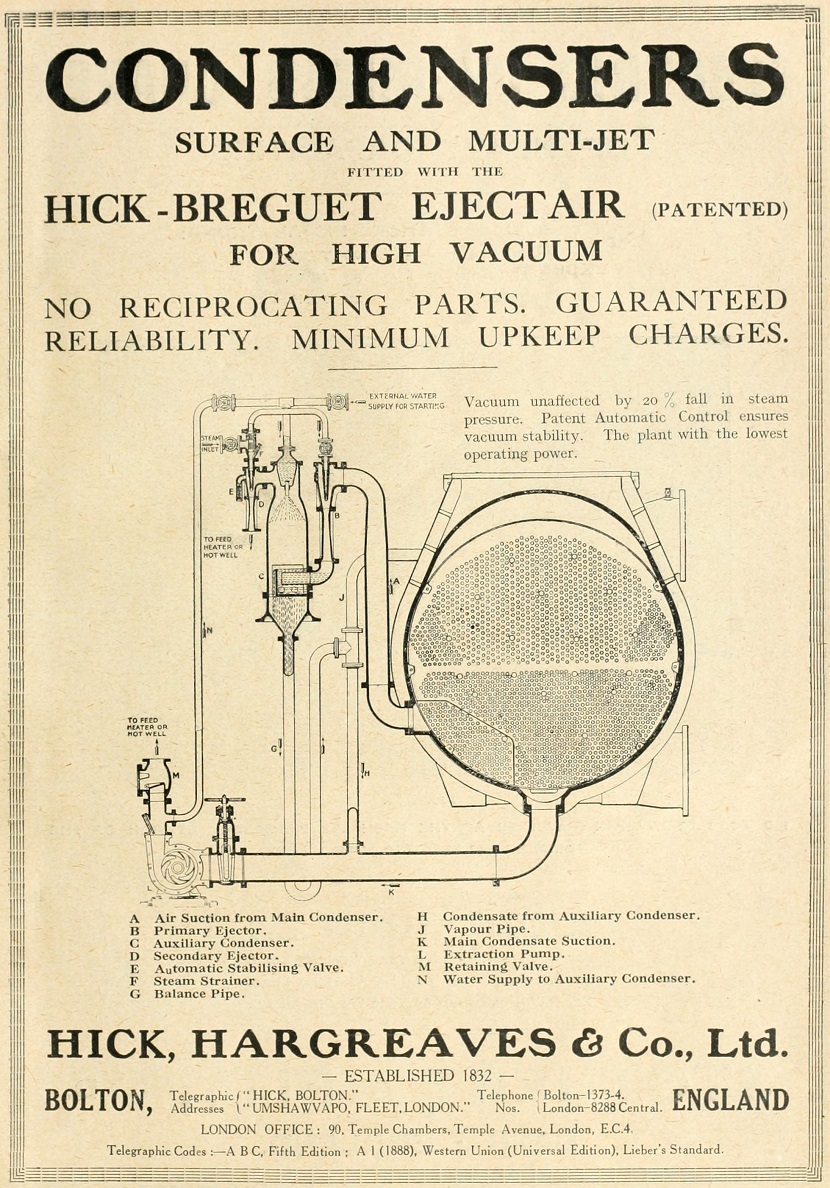 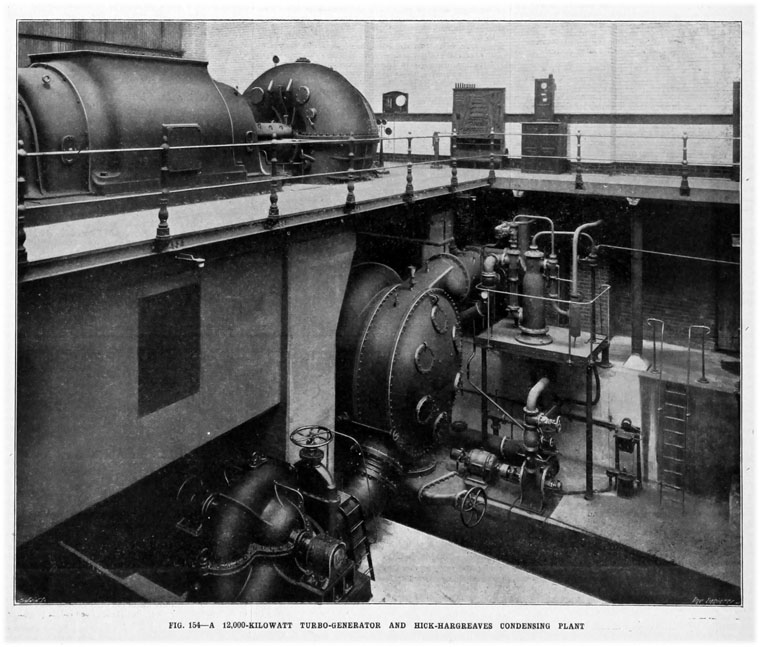 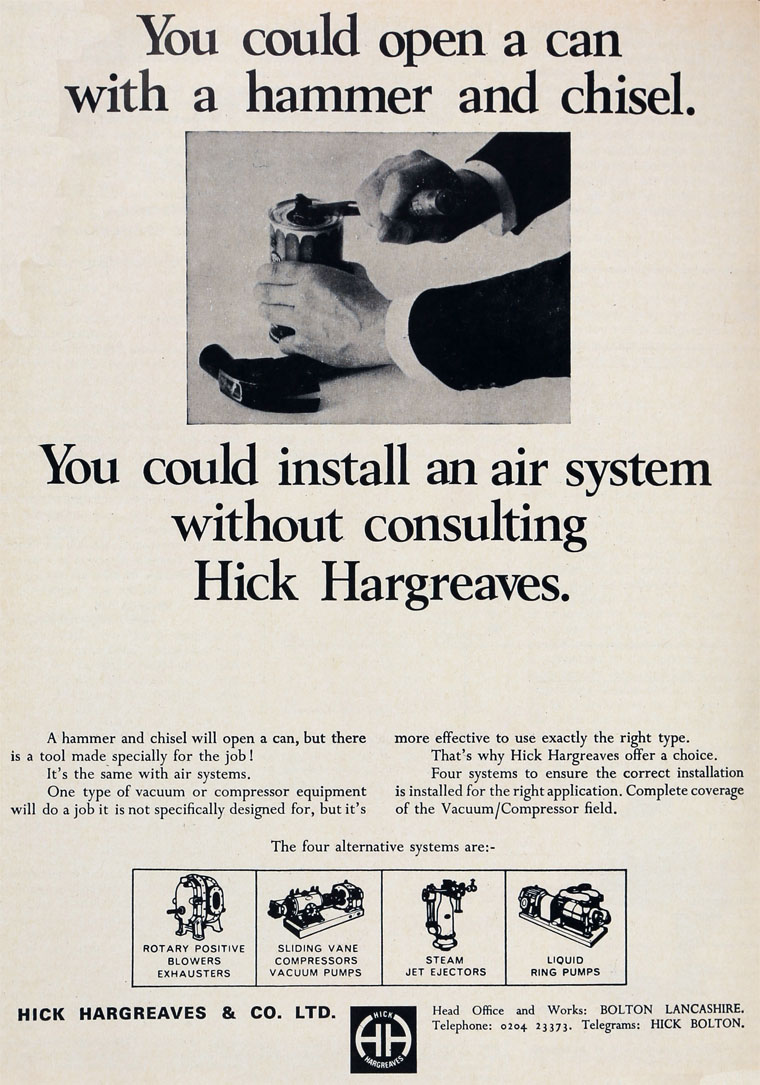 1855 Locomotive building continued until 1855 and they built around one hundred engines. Afterwards production was concentrated on marine engines of which they made a large number.

1865 Description of the Soho Works and some of its products[4]. Notable machines included a heavy boring machine for boring, drilling and face grinding engine cylinders up to 95" dia and approx 10 ft high; a lathe with a 10 ft dia faceplate capable of boring up to 16 ft dia; a planing machine designed by Mr Hick 'many years ago', originally for planing large cast iron plates for casting glass. It was unusual for its time in having a stationary bed and moving columns, and could take plates up to 30 ft long and 12 ft wide.

1866 Details of experiments on the friction of leather collars. [5]

1866 Made a Corliss engine for Wallis and Pollock of Cork, the the design of William Inglis of Manchester[6]

1867 William Inglis joined the company and later became a partner. With John Frederick Spencer they patented a new design of trip gear.

1867 Corliss engine at the Paris Exhibition.

1873 An article in the journal 'Iron', 7th June 1873, reported that in the last four years 24 horizontal engines of the Improved Corliss type, and 30 boilers, had been supplied to Freres de Wendel & Cie, Forges de Hayange. In the last two years they had also supplied two pairs of McNaught compound beam engines to Russia, indicating approx 1900 HP in total, and having flywheels 22 ft dia. They had also recently supplied two pairs of reversing rolling mill engines to Bolton Iron and Steel Co, and Corliss engines for Waterloo Flour Mills, London

1883 Engine built for the Howe Bridge Spinning Co, No. 2 Mill at Atherton.

1889 William Hargreaves died and the company took limited status and changed its name to Hick, Hargreaves and Co Ltd.

1891 Purchased the Phoenix Boiler Works; the boiler department at the Soho Works was moved to these works.

1892 Public company. The company was registered on 29 March, to acquire the business of the firm of the same name, engineers, millwrights and boiler makers. [8]

1896 Built a 2,000 IHP compound Mill Engine to the order of J. B. Barry and Co of London for the Gourapore Company's jute mills at Naihati nr Calcutta. Described in 'The Engineer' in 1900. See illustration. Cylinders 35" and 65" dia., 6 ft stroke. Flywheel 28 ft dia, 65.5 tons, grooved for 40 ropes. The steel crankshaft was made by the Bolton Iron and Steel Co. The article reported that the company had subsequently supplied three almost identical engines to mills in Calcutta and Bombay [10]

1910 Installed an engine at Partridge, Jones and John Paton.

1911 Began the manufacture of diesel engines.

1912 Supplied a steam engine to the Gorse Galvanising Co.

WWI The firm did much war work, and began making high vacuum condensing plant, used in power generation. This was greatly expanded in later years as centralised power generation was adopted in Great Britain.

1933 they acquired the records, drawings and patterns of three defunct steam engine manufacturers and did a lucrative business in making repairs and supplying spare parts. Large stationary steam engines were still used by many textile manufacturers in the Bolton area until the collapse of the industry after World War II.

After World War II the firm expanded its work in electricity generation, and branched out into food processing, oil refining, petrochemicals and offshore oil production.

1968 the firm was acquired by Electrical and Industrial Securities Ltd.

By 2002 the firm was part of the BOC Group, and the historic records were deposited with Bolton library.

Soho Iron Works was close to Bolton Trinity Street Station. It had its own railway system, and was connected to the main line serving Great Moor Street station. The works was bounded on the west by the railway, to the north by Crook Street, and elsewhere by Bridgeman Street and Burns Street.

A number of excellent works photographs taken in 1900 are available online[18]. Some examples:-

Crankshaft. Needs Must - an improvised lathe for carrying out some machining on a built-up crankshaft for a large steam engine.

Grooved flywheel A minimalist lathe for a big job. The photo shows a typical flywheel for a large textile mill engine, having the rope grooves machined. The set-up allowed a number of grooves to be machined at the same time. The wheel is rotated by two pinions driving via the cast-in barring gear teeth in the flywheel rim. It is by no means certain that the wheel is mounted on its own shaft - the shaft may well be a mandrel used solely for the turning operation.
A slow and no doubt noisy process, to be followed by shovelling a large accumulation of iron cuttings out of the pit.

Rolling mill flywheel The heavy rim is cast in four sections, shown bolted together at the rim. The empty slots in the faces of the rim will have 'dog bones' made to suit, and these will be heated and shrink fitted to hold the rim sections together. The bolted lugs might then be cut off.

Another flywheel. This has the hub and spokes cast in two halves and bolted at the hub, with the rim assembled from ten castings. These are bolted to the spokes, and also held together by shrinking rings in the grooves seen in the photo.

Tower for riveting boilers. The top of two hydraulic riveting machines can be seen. Their frames would have continued for some distance below the floor.

From 'Short Histories of Famous Firms' by Ernest Leopold Ahrons [19]

The Period 1830-50 was one of singular importance for the engineering industry of this country, and in its history Lancashire engineers played a very great part. Situated as it is in the midst of coal mines and cotton mills, it is not surprising that the town of Bolton became a centre of mechanical engineering. The name of “Hick” was probably as famous in Bolton as “Whitworth” in Manchester, “Maudslay” in Lambeth, or “Tangye” in Birmingham. It was Benjamin Hick who started the Soho Ironworks at Bolton in 1832. He had previously been in partnership in the firm of Hick and Rothwell, who owned the Union Foundry in the same town – a firm which is no longer in existence, having been absorbed many years ago by the Bolton Iron and Steel Company, which in turn was taken over by Henry Bessemer and Co in 1906.

Benjamin Hick with his two sons John and Benjamin, began business as general engineers at the Soho Works with the title of B. Hick and Sons....[more]