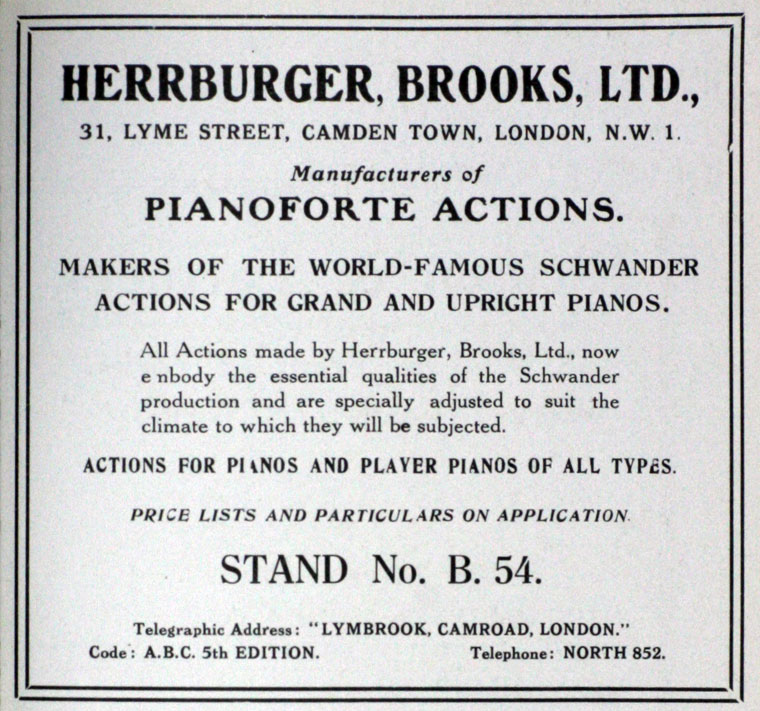 Until 1998, Herrburger Brooks was the world's oldest established maker of piano actions, hammer heads, and keyboards.

1810 The company was founded in London, by Henry Brooks.

1844 in Paris, Jean Schwander set up production of the famous Schwander action. This branch was later named after his son-in-law Josef Herrburger. He retired in 1882, but his name can still be found on many actions of fine pianos made today. Bechsteins, for example, were fitted with Schwander actions, up until about the time of the First World War.

1885 spring and loop actions in grand pianos, sometimes incorrectly known as simplex actions, were being made by Herrburger Brooks.

1920 Twenty years later, Brooks of London and Herrburger amalgamated, so the firm of Herrburger Brooks came into being.

1922 British Industries Fair Advert as Manufacturers of Pianoforte Actions. Makers of the World-famous Schwander Actions for Grand and Upright Pianos. (Stand No. B.54) [1]

Late 1920s Herrburger Brooks moved from London to Long Eaton, Nottingham. The company made piano actions for many piano manufacturers.

1953 the English company absorbed the Paris operation, and moved it to Long Eaton, where it became the largest manufacturer of piano actions in Europe.

1967 they stopped making the spring and loop action for grands. This is a useful date for piano technicians, as many small grands used this action.