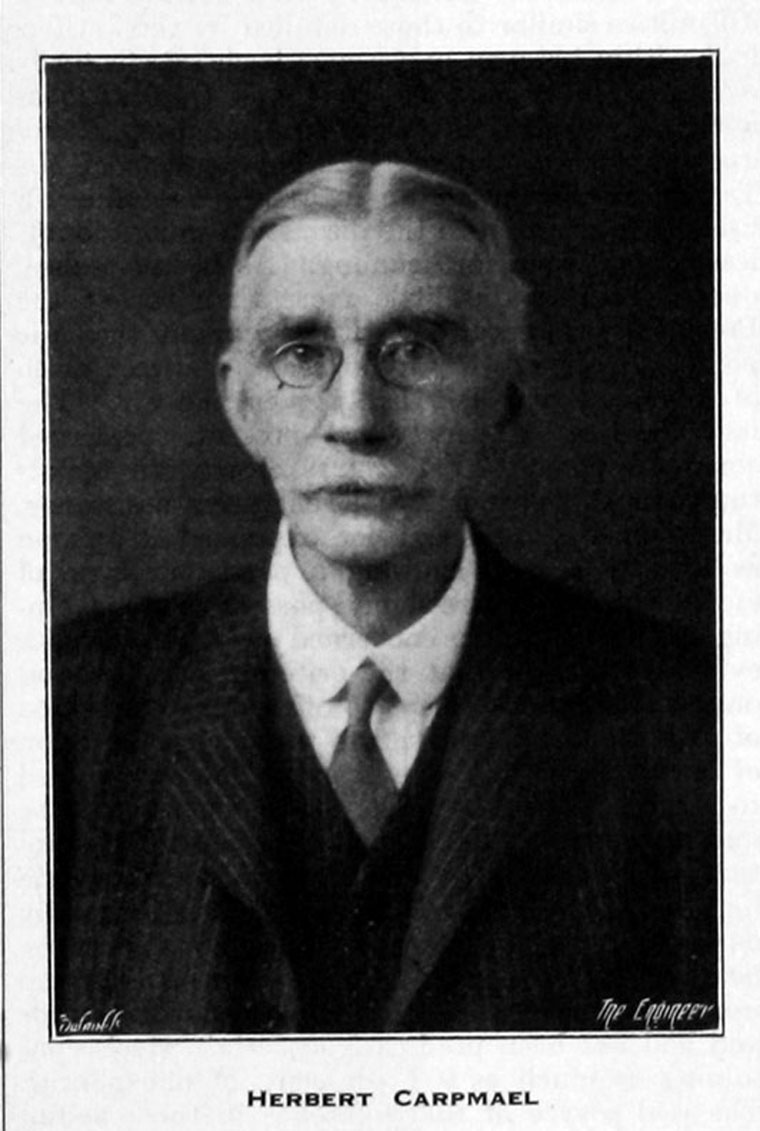 1887 Served his Apprenticeship with the Brush Electrical Engineering Co.

1893 Joined Bramwell and Harris of Westminster.

1898 Joined the Editorial staff of The Engineer and was Chief Sub-Editor.

It is with great regret that we record the death, on Sunday last, at the age of 63, of Mr. Herbert Carpmael, for many years chief sub-editor of our contemporary, The Engineer, after being connected with that journal for over 33 years. Mr. Carpmael was an old Dulwich boy, having attended the College from 1879 to 1887. Early in 1888 he went as a student to the works in London, of the Brush Company, then the Anglo-American Brush Corporation, his term with them in that capacity lasting for three years. At the end of this time he was retained by the firm as an assistant engineer, and had part charge of the company’s lighting installation at the Edinburgh exhibition of 1890. After further installation work, he was appointed in 1891 as chief assistant in the testing department. He also had charge for some time of train-lighting experiments in France, and of the installation of the municipal electric lighting works at Blackpool.

In the autumn of 1893, he entered the service of Messrs. Bramwell and Harris, MM.Inst.C.E., Westminster, and became chief engineering assistant to the firm in 1895. In this connection, he was engaged upon sewage and water works, refrigeration, transmission of power, electricity supply, &c.'

When in 1897, our contemporary The Engineer organised a series of motor car trials, enlisting the co-operation of Sir Frederick Bramwell and Sir John Aspinall as judges, Mr. Carpmael attended as one of Sir Frederick Bramwell’s staff. The connection thus made developed in 1898, when Mr. Carpmael was offered and accepted the position of assistant on the editorial staff of the late Mr. Vaughan Pendred. As a result of his former experience, he paid particular attention to civil engineering subjects, especially to water supply and sewage, and continued to attend to these after his appointment as chief sub-editor, though, of course, at times he was to be met with in quite different fields.

He was a hard worker and a staunch colleague, and the services he rendered to our contemporary made him a very, valuable member of the staff. He was quiet in manner and courteous, and as a fellow participant in functions and demonstrations was a particularly agreèable companion. He was guardedly unobtrusive, and was not often to be seen at the technical institutions, where, however, he maintained touch with a considerable circle of friends. Before his death he had been in failing health for some time, and had been forced to give up much of his work. He became an Associate Member of the Institution of Civil Engineers in 1897, and of the Institution of Electrical Engineers in 1902. We offer to the Editor and staff of our contemporary our sympathy in the loss they have sustained."