Grace's Guide is the leading source of historical information on industry and manufacturing in Britain. This web publication contains 145,367 pages of information and 230,731 images on early companies, their products and the people who designed and built them. 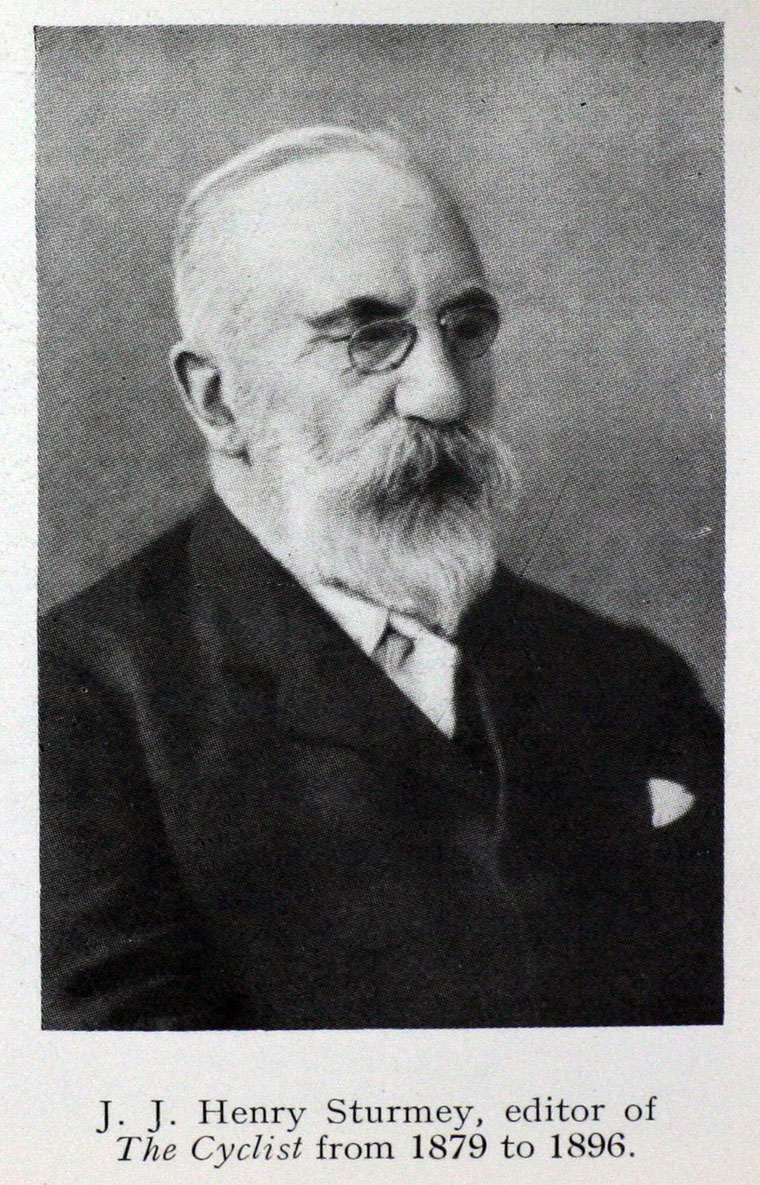 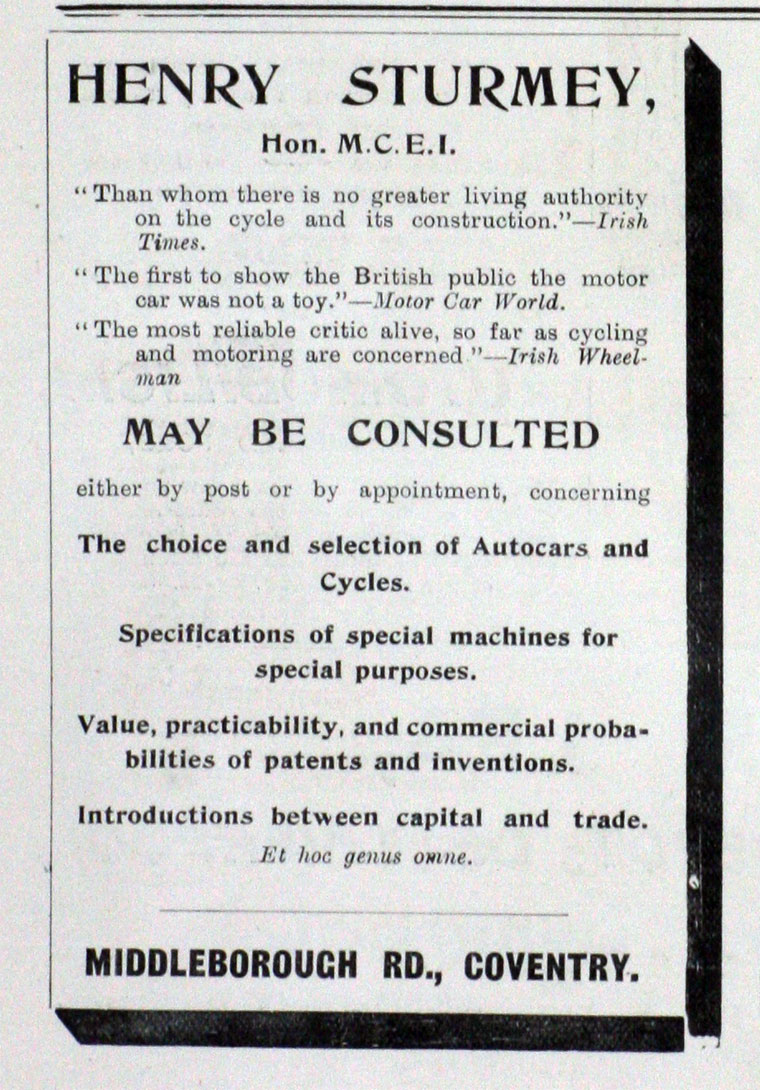 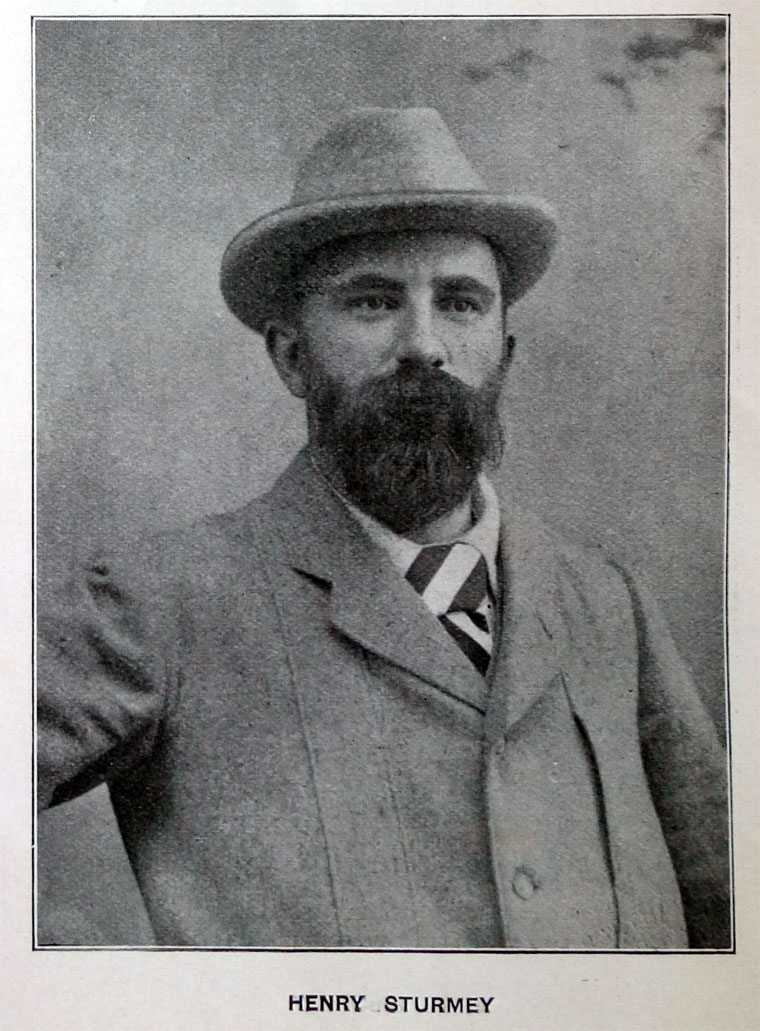 He was educated at Melcombe Regis School and Weymouth College.

Originally a schoolmaster. First post was as assistant master at Brixton Hill College

By 1879 he was a ‘chief consul’ of the infant Bicycle Touring Club, which became the Cyclists Touring Club in 1883.

After Sturmey had published the first edition of the ‘Indispensable’ Bicyclist's Handbook (1877), he established contact with William Iliffe, of a Coventry family printing firm Iliffe and Sons, a meeting which was to be a significant event for both. Presumably led to formation of Iliffe, Sons and Sturmey. Formed The Cyclist publication

Sturmey invested heavily in the Great Horseless Carriage Co, one of the numerous companies promoted by the inventor turned financier, Harry Lawson (1852–1925), whom Sturmey succeeded as chairman of the Daimler Motor Company.

1896 Director of Daimler and the Great Horseless Carriage Co [2]

1897 October. Set out on a 1,600 mile journey around the UK with Richard Ashley in a Daimler

1900 Produced prototype Voiturette which he used to test his three-speed epicyclic gearbox. The car was never put into production but the gearbox developed into the unit widely used on bicycles.

1900 His contribution to cycling continued indirectly through the Sturmey-Archer three-speed hub gear. This device had a complex background. William Reilly's original designs were patented in the name of a colleague, James Archer, to avoid a restrictive contract Reilly had entered into with the Hub Two-Speed Gear Co; this patent was 11 days before that of Henry Sturmey. It was manufactured by Frank Bowden's Three-Speed Gear Syndicate from 1903, Bowden having obtained the rights to both the Reilly/Archer and Sturmey 3-speed hubs.

1901 July. Formally steps down as editor of 'The Autocar' having been absent the past nine months after an accident. H. W. Stanier will take over as editor.[4]

In 1902 Sturmey set up the Duryea Co which built under licence in Coventry for a few years, utilizing a Rugby-made engine.

1904 STURMEY, Henry, F.R.P.S., The Quarry Close, Coventry. Cars: 3-h.p. Voiturette of his own design, 10-h.p. Duryea Surrey. Hobbies: Cycling, rowing, photography, foreign travel. "To benefit my fellowmen, the industry and the City of Coventry, and to get all the fun I can out of it myself," are Mr. Sturmey's principal aims in furthering motoring. Clubs: Midland Automobile, A.C.G.B. & I. (Club Committee). [5]

1904 Sturmey sold the Three-Speed Gear Syndicate his foreign patent rights, and appears to have had no further significant involvement with the syndicate.[6]

1907 Sturmey Motors made the Napier-Parsons light van for one year before inaugurating the Lotis marque of cars and commercial vehicles. The range included taxicabs and lasted from 1908 to 1911.

In the 1920s Sturmey returned to the topic of cycle gears, advocating in the cycling press the hub as opposed to the bracket gear. With John Peart, a Coventry engineer, he took out a patent (118, 178 of 1922) for the first five-speed hub gear, but failed to interest a manufacturer.

STURMEY, HENRY, F.R.P.S., Hon. M. C. Eng. Inst. of Coventry.- Born 1857 at Norton-sub-Hamdon, Somerset; educated at Weymouth College; was Mathematical and Science Master Brynarvor College, N. Wales, and Headmaster Coventry Collegiate School, 1879. He founded The Cyclist in 1879, Photography in 1889, and the Autocar in 1895, and edited them until 1900. He is the inventor and patentee of many improvements in cycle and car construction. Now specialising as a consultant upon cycle and motor car construction. Principal pursuits and amusements: Rowing, cycling, motoring, photography and travel.

He took up motoring in 1895, and has motored in France, Germany, Canada, and the United States, as well as at home. He has owned Daimler and Duryea cars, and also one of his own design and construction. He now owns 10 h.p. Duryea and voiturette of his own construction. Founded the Autocar in 1895, and edited it until met with bad smash in 1900 when testing an experimental car. Drove one of the first English Daimler cars from John o'Groats to Land's End, London, and Coventry, a tour of 1600 miles - at that time the longest on record - in 1897. Was a director of the Daimler and Motor Manufacturing Companies in 1896-7-8. Mr. Sturmey is a member of Midland Automobile Club and Founder Member of this Club.