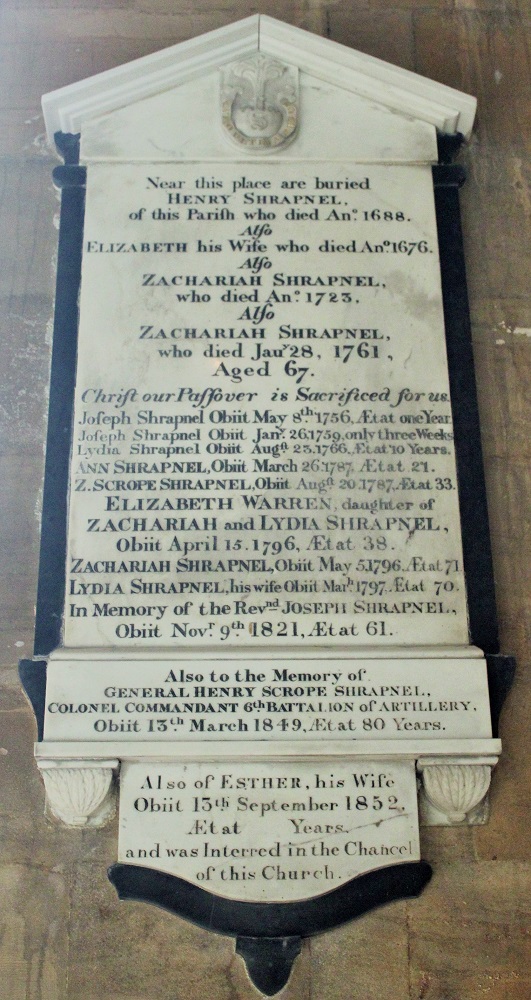 Henry Scrope Shrapnel (1761-1849) was a British Army officer and inventor, most famously, of the "shrapnel shell".

Born on 3 June 1761, the youngest son of the nine children of Zachariah Shrapnel (1724–1796) from Midnay Manor House, Bradford-on-Avon, Wiltshire, and his wife, Lydia (née Needham).

1784 While a lieutenant in the Royal Artillery, he perfected, with his own resources, an invention of what he called "spherical case" ammunition: a hollow cannon ball filled with shot which burst in mid-air. This device was for use as an anti-personnel weapon. The first shells were designed and built with the Carron Co

1803 When it was finally adopted by the British Army in 1803, it immediately acquired the inventor's name: the shrapnel shell. (It has lent the term "shrapnel" to fragmentation from artillery shells and fragmentation in general ever since, long after it was replaced by high explosive rounds.)

Shrapnel served in Flanders where he was wounded in 1793 and was promoted to major on 1 November 1803 after eight years as a captain.

1804 After his invention's success in battle on 30 April 1804, Shrapnel was promoted to lieutenant colonel on 20 July 1804, less than nine weeks later.

1814 In recognition of Shrapnel's contribution, the British Government awarded him £1,200 a year for life.

1827 He was appointed to the office of Colonel-Commandant, Royal Artillery, on 6 March 1827.

Until the end of the World War I shells were still being manufactured according to his original principles.