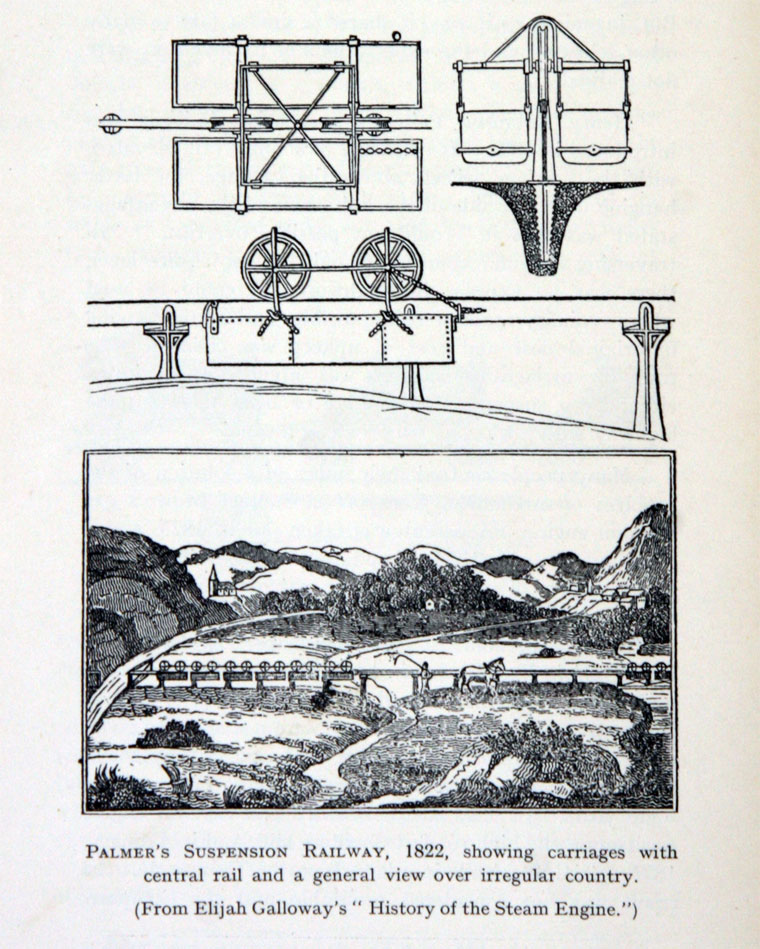 1793 Born at Hackney the son of the Revd Samuel Palmer, a nonconformist minister, and his wife, Elizabeth, née Walker[1]

He was educated at the academy run by his father.

On finishing his apprenticeship Palmer was engaged by Thomas Telford and worked for him for ten years on a large number of road and canal surveys and associated designs.

1820 May 23rd. Formally became a member of the Institution of Civil Engineers.[2]

1825 June. Description of the one mile railway and its demonstration. [3] Palmer's monorail is regarded as the precursor of the Schwebebahn Wuppertal and of the Lartigue Monorail system.

1826 Appointed resident engineer to the London docks where, over the next nine years, he designed and executed the Eastern Dock, with the associated warehousing, entrance locks, bridges, and other works.

Regarding Palmer’s invention of corrugated iron, Dr. Pedro Guedes wrote that 'Palmer exploited the unique properties of metal, creating a lightweight, rigid cladding material, capable of spanning considerable distances without any other supports, helping to make lightweight iron buildings and roofs possible. Palmer’s invention completely broke with precedent and tapped into another level of thinking. The sinusoidal corrugations that Palmer imagined as the means to impart strength to his sheets of wrought iron have continued virtually unchanged for close on two centuries.'[5]

1831 He was elected FRS, and published two papers on tides and the movement of shingle in the Philosophical Transactions , 1831 and 1834.

c1835 Moved to Westminster as a consulting engineer and was involved in numerous surveys for projected railways, and the design and construction of several docks and harbours, including those at Port Talbot, Ipswich, Penzance, and Neath. He carried out the original surveys for the South Eastern Railway, assisted by P. W. Barlow, and would have executed the scheme but ill health intervened. His original surveys for a Kentish railway dated from the time he was associated with Telford

1837 Patent for improvements on giving motion to barges and other vessels on canals. HRP of Great George Street, Westminster, Civil Engineer. [7]

1842 Patent for improvements in the construction of roofs and the application of corrugated plates or sheets. HRP of Great George Street, Westminster, Civil Engineer. [9]

1842 Published 'Description of the Harbour of Port Talbot' in the Transactions of the Institution of Civil Engineers.

Rev. Samuel Palmer was born at Bedford, was educated at Bedford grammar school, and then studied for the ministry (1758–62) at Daventry Academy under Caleb Ashworth.

In 1762 he became afternoon preacher to the independent (originally Presbyterian) congregation at Mare Street, Hackney, and was ordained on 21 November 1763. From 10 June 1763 he occasionally assisted William Langford, D.D. (1704–1755), at the Weigh-house Chapel, Little Eastcheap, and was the regular morning preacher there from 20 June 1765 to 28 December 1766. He then succeeded William Hunt as morning preacher at Mare Street, and remained in charge of the congregation, which moved in 1771 to St. Thomas's Square, till his death.

For some years, from about 1780, he had a boarding-school. He was a quiet preacher, his views being close to those of his friend, Job Orton. He early adopted Sunday school for his church. Henry Forster Burder was his assistant from October 1811; but Palmer remained active in his charge to the last, preaching on the Sunday before his death. He died on 28 November 1813, and was interred on 6 Dec. in the burial-ground at St. Thomas's Square. His funeral sermon was preached by Thomas N. Toller of Kettering, Northamptonshire.

He left a large family. His son Samuel entered Daventry Academy in 1786, and became a schoolmaster at Chigwell, Essex.

Samuel and Elizabeth had the following children: