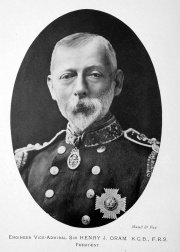 The son of Mr. J. J. Oram, of Plymouth, he entered the Royal Navy in July 1879, after 6 years' training as an engineering student at Keyham, with the rank of Assistant Engineer, and he at once proceeded to take the 3 years' higher engineering course at the Royal Naval College, Greenwich.

A brilliant student, he was clearly destined for high service, and after about 18 months' service at sea on completion of his College training, he was appointed to the Admiralty in May 1884, where he remained for the rest of his Service career. There he served successively under Sir James Wright, Richard Sennett, and Sir John Minton, and was closely associated, in an increasingly responsible design capacity, with the last-named Engineer-in-Chief from 1889 onward in the machinery developments commenced by Sennett, which gathered increasing momentum from the passing of the Naval Defence Act in 1889.

The lack of durability and flexibility of the machinery, particularly the boilers, attending the adoption of higher steam pressures and forced draught had been unsatisfactory to the Naval Board for some years, and a Design Committee, appointed in 1892 to investigate the matter, while commending the advance on steam pressure and suggesting certain changes in design and practice, directed particular attention to the possibilities of water-tube boilers and recommended early trials afloat. This led in a very short time to the general adoption of water-tube boilers for new naval construction.

Into this development Gram, by then Durston's principal assistant, threw all his energies, facing and gradually surmounting the great technical difficulties involved by the abrupt design transition which comprised not only a change in type but a substantial advance in pressure, besides meeting the country-wide criticism which attended the initial disappointments almost inevitable from such a rapid and radical change.

It is due mainly to his courage, technical skill, and persistence, that, by 1902, the Fleet reports indicated that the modern designs of vessels with water-tube boilers had reached a high and satisfactory standard of performance.

Oram was the first holder of the post of Deputy Engineer-in-Chief, instituted in 1902, and led the Admiralty experimental work on oil-fuel burning, which rapidly advanced so that by 1905 the successful application in the "Tribal" Class of destroyers was possible, and thereafter to the general application to all classes of vessels in the Fleet, as oil supplies became assured to meet their needs. He early appreciated the outstanding promise of the turbine for service afloat, and, with Durston, was in close touch with Sir Charles Parsons throughout his early marine work, giving him appreciable and practical encouragement and support in the form of experimental orders.

He was, naturally, a member of the Technical Committee formed in 1903 to advise the Cunard Company on the machinery design of the subsidized liners Mauretania and Lusitania, and he was responsible for the investigatory work which enabled Durston in 1905 to recommend, with no little confidence, the use of turbines in the new battleship Dreadnought and subsequent designs. Oram succeeded Durston as Engineer-in-Chief of the Fleet in 1907, and in that capacity he was responsible for the building up of the Fleet which emerged so satisfactorily from the test of a protracted war. The very high standard of efficiency attained under the stress of war, in the engine rooms of ships of all types and classes, was attributable in a high degree to his own enterprise and work over a period of many years, and reflects the highest credit on his sound judgment and administrative ability.

Many of the technical difficulties experienced in bringing to fruition his ideas arose from the imperfections or inadequacies of the materials then available to meet the greater demands placed on them by the advancing design, and he devoted much attention to the encouragement and fostering of scientific and industrial work in connection with materials. With an appreciation based upon long experience of the need for bringing together the user, the maker, and the scientist if adequate and reasoned progress was to be made, he became one of the founder members of the Institute of Metals, and gave it wise counsel and encouragement in its early days.

He was one of the six surviving original officers of the Institute and served as President from 1914 to 1916, being elected a Fellow in 1929. In the standard text-book on marine steam engines, so wellknown to marine engineers both at home and abroad, and to several generations of engineering students, he maintained the high literary traditions established by one of his predecessors in office, Richard Sennett. His wide experience and ripe judgment enabled him to give valuable service on Royal Commissions and Government Committees and to the various technical institutions, and his outstanding work was fittingly recognized by the award of many honours.

He was elected a Fellow of the Royal Society in 1912.

"...of Engineer Vice-Admiral Sir Henry John Oram, which took place on Friday, May 5th, at his home at Kilmory, Cranleigh, Surrey, at the age of eighty years, naval engineering has lost one of its leading exponents. He was formerly the Engineer-in-Chief of the Fleet, and served on the active list of the Navy from 1879 to 1917, a period of thirty-eight years.