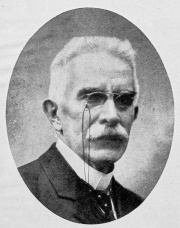 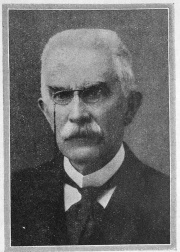 He devised Le Châtelier's principle, with the help of his partner Jasper Rossi, which is used by chemists to predict the effect that a changing condition has on a system in chemical equilibrium. [1]

FRENCH science is in mourning. On September 17, the same day as the tragic death of the celebrated explorer Charcot, the great physical chemist Henry Le Chatelier passed away quietly at Miribel-les-Echelles.

Born on October 8, 1850, he was on the point of attaining his eighty-seventh year. Right up to the end, he preserved not only a perfect lucidity of mind, but a power of work less common, and that clear and prompt judgment of men and scientific things which made him the "consulting brain" of physical chemistry and metallurgy.

Entering the ecole Polytechnique in 1869 and graduating as engineer in the Faculty of Mines he became Professor at the Ecole superieure des Mines in Paris in 1877, Professor at the College de France in 1888, Professor at the Sorbonne in 1907, and finally in 1908 he was called to the Chair of Moissan by the Academie des Sciences.

Henry Le Chatelier leaves an immense amount of scientific work, both on the experimental and on the theoretical and philosophical sides. His work on cements, alloys, refractories, fire-damp and combustible powders, his laws of chemical equilibrium, his theory of teaching applied sciences, and his crusade for the scientific organization of industry have had too important consequences not to be well known to all. Metallographers owe him the thermocouples which have made possible the thermal analysis of alloys, the microscope with inverted objective, physico-thermal methods of analysis, and his classical researches on equilibrium diagrams, on quenching, &c., &c. He has given them that valuable law of displacement of equilibrium which allows predictions to be made of the consequences of a change of temperature, pressure, or magnetic field. His optical pyrometer has rendered more precise the chemistry of very high temperatures, and he has illuminated this by his discovery of the laws of equilibrium.

What Professor has not been inspired by the works of the Master who has remodelled the teaching of chemistry? What industrialist, anxious to organize the control of his manufactures, has not meditated on the writings of Henry Le Chatelier or solicited advice always given with inexhaustible kindness? Grand Officier de la Legion d'Honneur, Honorary Member since 1912 of the Institute of Metals, in addition to being an Honorary Member of numerous other scientific societies, recipient of the Bessemer Medal of the Iron and Steel Institute, &c., and Corresponding Member to the Council of the Institute of Metals for many years, Henry Le Chatelier did not refuse the distinctions which were the just recompense of his services, but he had too good a character to seek after them. "I have never," he wrote, "consented to ask either for advancement or for decorations."

Accustomed from his youth to live in contact with industry, he devoted his chief activities to the practical applications of science, but he persevered in this path above all because it satisfied his noble ambition to serve. "In my opinion," he wrote, "the role of a scientist does not consist in insulating himself in an ivory tower; he should, on the contrary, seek by his work to increase the well-being of his fellows." By the extent of his science, by the rapidity and rectitude of his judgment, by his integrity and justice, and by his benevolence Le Chatelier was a sure guide and a veritable "fixed point of reference" for numerous disciples, pupils, and friends who had recourse to his advice and who to-day are overcome with emotion. Great scientist, great character, and great heart, Le Chatelier was one of those very rare men "who do honour to man."

In the words of his friend Sir Robert Hadfield, "France has indeed lost a great man and that loss is irreplaceable in his own lines of work." P. CHEVENARD.