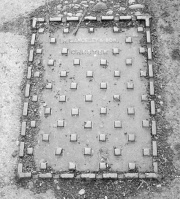 1876 'The Cathedral Organ [Chester].— The difficulties which were so ably met by the prompt assistance of voluntary and paid help at the time of the re-opening have now been entirely overcome by introducing steam power for the purpose of supplying the wind necessary for giving speech to the organ. In a short time it is hoped that the Messrs. Whitely will be able to complete the instrument, from which 23 stops, besides other mechanical appliances, are still wanting. In deference to the professional view which Sir Gilbert Scott strongly insisted on, the Dean consented to the engine-room being, sunk below the level of the floor of the Cathedral, and even below the level of the drainage in that part of the town. With the exception of tho inconvenience and risk which are likely to result from the position of the engine, there is everything to induce the belief that the beautiful machinery now adjusted by Mr. Henry Lanceley, of this town, will prove thoroughly efficient and satisfactory in every respect. For the sake of those who are specially interested in machinery we append some short description of the steam-engine and boiler manufactured and supplied by Mr. Lanceley : — The boiler is a Cornish one, 7ft. long, and 4ft. in diameter. It is fitted with two sets of water guages, steam guage, patent fusible plug, lever safety valve, patent dead weight safety valve, and one of Gresham's patent improved Giffard's injectors for supplying water. The engine is a horizontal one of very simple construction, and is noiseless in its action. Motion is communicated to the bellows, which are in a chamber in the Triforium of the North Transept, by means of a shaft running under the floor of the Chapter House. This shaft, which is set in motion by means of spur mortice gearing, also moves by means of mitre mortice wheels, an upright vertical shaft which rises to the floor of the bellows-room. On this floor works another horizontal shalft, and on the end of this shaft there is fixed a circular disc, from which, by help of mechanical contrivances, the bellows are set in motion. At present there is every reason to hope that the serious obstacles which have hindered the Messrs. Whitely from doing themselves justice will now be entirely removed, and that while we compliment Mr. Lanceley on his work we shall shortly be able to judge of the tone and construction of the instrument which is so great an ornament to the Cathedral in its unrivalled case.'[1]

1893 Exhibited steam engines at the Royal Agricultural Show, the largest being a horizontal mill engine with a cylinder of 16" bore, 30" stroke. They also showed an old engine which powered one of Lanceley's shops from 1856. It was said to have beautiful fluted columns and a polished entablature.[3]

1893 Royal Agricultural Show at Chester: 'Henry Lanceley and Son, Providence Foundry and Engine Works, Brook-street, Chester, occupy Stand No. 329, which has been admirably laid out, and is one of the most attractive of its class on the show ground. Mr. R. H. Lanceley is in attendance at the stand, and has charge of the exhibit, which consist of horizontal and vertical steam engines, combined vertical steam engines and boilers, large saw bench with drag motion, and machine for joiners' special purposes. There is also a model vertical steam engine designed by Mr. Henry Lanceley, in 1856, to bring out a special valve motion. This engine has now done 25 years' constant work, and well deserves careful inspection. The largest horizontal engine on the stand is 20 horse power, and the smallest 1 1/2. The firm have supplied two of the large size to the Duke of Westminster for driving the machinery at the Eaton estate works, Pulford, and twelve other engines of various sizes have been supplied to farmers on the Eaton estate. One of Messrs. Lanceley's vertical engines is in use for driving the machinery at the dairy on the show ground, and an engine exactly similar in size and design to that supplied for driving the machinery at the Worleston Dairy Institute, is on view at the stand. Messrs. Lanceley's exhibit also includes a small engine for a steam launch, and it is interesting to know that upwards of twelve of their joiner's shop engines are now at work in the city of Chester.'[4]

1942 'A CHESTER-BUILT RAILWAY ENGINE — About 60 years ago the first and only railway engine to built in Chester left the assembling vard on the premises of the firm of Lanceleys. Ltd. engineers, of Brook-street, and went along George-street and Brook-street to join the main railway line. It was driven by its own steam says Mr Thomas George Jackson, of 27. Clarenden-road Wallasey. whose father the late George T. Jackson was employed bv Mr Henry Lanceley the founder of the firm of Lanceleys Ltd.'[5]

1969 'The old established engineering firm of Henry Lanceley and Son have recently moved from their premises in Brook Street, which are due to be demolished to make way for the Inner Ring Road, to their newly-built works at Trafford Street, Chester. Established over a hundred years ago, in 1868, they have dealt with all types of manufacturing and repair work during this period. During the 1890's they built three shunting locomotives for the Indian railways; no mean feat for a firm of this size, and in more recent times they completely dismantled a horizontal steam engine at the City Hospital and rebuilt it for the College of Further Education at Eaton Road. This engine is now in regular use at the college. Early in the Second World War the business was acquired by Mr. J. H. Townson who had been with Lanceley's for many years, and is still run by him in partnership with his two sons Gordon and Tom Townson. Mr. Townson and his sons look forward with enthusiasm to their new works with its modern working conditions and machinery and will continue to give the same efficient service which has been the hallmark of the family business for many years.' [6]

1977 'The funeral took place on Tuesday of Mr. Joseph Henry Gordon Townson, of 29a, Heath Lane, Boughton Heath, when a service held at St. Werburgh's RC Church, was conducted by canon F. Murphy. Mr. Townson, an 83 years old widower, was a retired engineer, having worked with Lanceleys Engineering from the age of 14. He served in the Royal Army Signals Corp in the First World War, and returned to Lanceleys, becoming managing director in the 1930s.'[7]

2020 A small reversing vertical engine by Lanceley is currently being restored in British Columbia. See here.