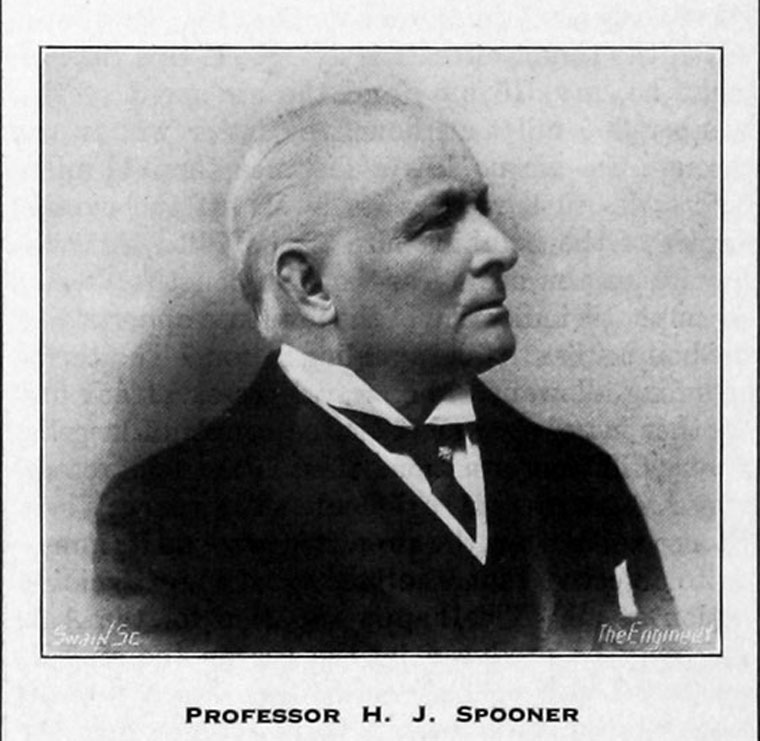 1922 Mr Spooner retired from is position of forty years as Head of the Polytechnic School of Engineering.[1]

ONE of the veterans of engineering education has been taken from us by the death at eighty-four years of age of Professor H. J. Spooner. He was born in 1856, and opened his career as a teacher when he was only three-and-twenty.

His technical education was acquired at the Royal School of Mines, and as an engineer under Loftus Perkins, and soon after completing it he gave a course of lectures to the staff and workers of the Royal Small Arms Factory at Enfield and the Waltham Powder Mills. It will be remembered that at that period there were few, if any, evening schools, but there still were what were known as Artisans Clubs in many parts of the country at which lectures were delivered on technical subjects, often by men who subsequently made their mark in the world of engineering or had already done so.

Spooner was obviously successful as a teacher, for in 1882 he was appointed principal Lecturer on Mechanical Science at the Polytechnic in Regent Street, which even at that time had won a name in the field of technical education. Four years later his position in the college was greatly improved when he became Director and Professor of Civil and Mechanical Engineering, a post which he retained till 1922, when he retired at the end of forty years' service. During that period he wrote a number of text-books of one kind and another, and at least one book on motoring, in which he took a keen interest.

But he will be principally remembered in recent years by the energetic campaign against noise which he pursued both in this country and America. There can be no question at all that it was largely owing to his persistency that the world became conscious of the ill-effects that noise was having upon humanity, and that scientific research into the subject was begun. He was selected in 1921 to give the Chadwick Lecture, and took as his subject "Problems of Noise and Fatigue," but he, in fact, did more to force the matter upon public attention by copious letter-writing, both to the Press - THE ENGINEER included - and to private individuals. He served on numerous special committees on industrial management, industrial fatigue, &c., and wrote articles on a variety of subjects for the British and American Press. But, as we have said, he will always be remembered by what he unquestionably achieved by his campaign against noise.

Professor HENRY JOHN SPOONER will be remembered by a very wide circle of engineers who studied under him during his long association with the Polytechnic, Regent Street, London. His work for engineering education extended over forty years, and he exerted a great influence in that field, not only as a result of his lectures but also through the important textbooks of which he was the author.

Professor Spooner was born in 1856 and served his apprenticeship from 1871 to 1876 with Messrs. W. Cubitt and Company at Grays Inn Road. After being engaged for two years on marine engine work at the works of Messrs. Day, Summers and Company at Southampton, he joined Messrs. A. M. Perkins, whose works were at Seaford Street, London, in 1878, and was employed on the development of the Perkins engine.

In 1881 he entered the employment of Messrs. Clark and Standfield, of Westminster, and was engaged on the designs for the iron floating docks for Vladivostok and Barrow, and for canal lifts for the French and Belgian Governments. As early as 1879, however, his thoughts were turned towards a career as a teacher. In that year he lectured to the staff and workers of the Royal Small Arms Factory, Enfield, and in 1882 he began his connection with the Polytechnic, Regent Street, with which he became so closely identified. His first appointment was that of lecturer in mechanical science, but in 1886 he was promoted to be director and professor of civil and mechanical engineering, a position which he occupied until his retirement in 1922. But he was also well known as an engineering consultant; he commenced to practice on his own account in 1883.

He pursued an energetic campaign in this country and in America against noise, and when he was selected to give the Chadwick lecture in 1921, he took for his subject "Problems of Noise and Fatigue". During the war of 1914-18, he organized special courses of industrial work for women, as well as for men who were physically unfit for service in the Army, and gave public lectures on fuel economy. He was appointed honorary technical adviser to the King George Military Hospital, and to the Union of South Africa's Military Hospital, Richmond Park.

Professor Spooner held several patents in connection with steam plant, including a combined steam and internal combustion engine, as well as patents for the preparation of peat as fuel, and for various anti-noise devices. He was the author of a number of textbooks on various engineering subjects, his principal work being "Machine Design, Construction, and Drawing". He also wrote a work published in 1918 entitled "Wealth from Waste: Elimination of Waste a World Problem". Foreign recognition of his work included his being created Knight Commander of the Royal Order of St. Sava, by King Alexander of Serbia in 1895. The title of Knight of the Golden Cross, Royal Order of the Redeemer, was conferred by King George of Greece in 1907.

Professor Spooner, whose death occurred on 16th December 1940, was one of the oldest Members of the Institution. He was elected a Graduate in 1883 and was transferred to Membership in 1886. He was also an Associate Member of the Institution of Civil Engineers.