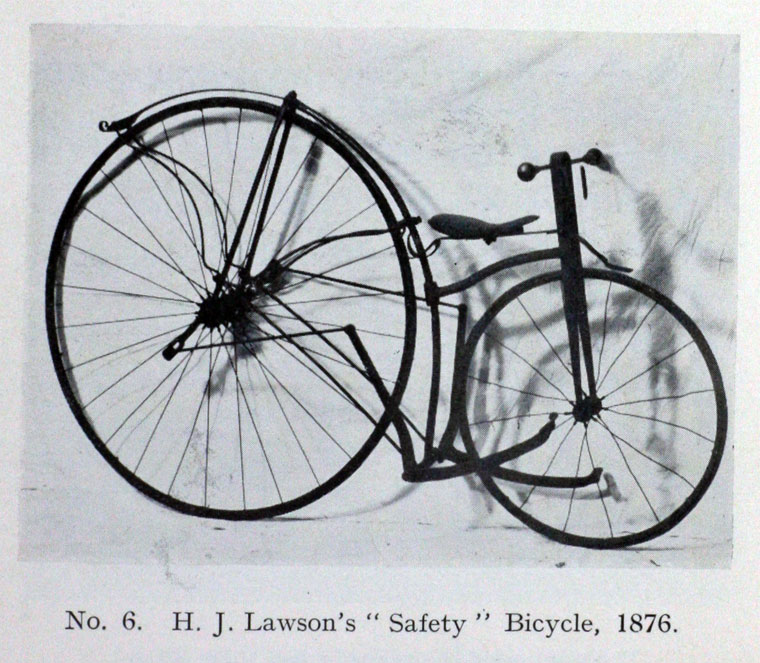 Note: this is a sub-section of Henry John Lawson

1880 Lawson brought out his chain-driven "Bicyclette", which he had patented the previous year (No. 3934, 30th September, 1879). This machine had ‘bridle-rod’ steering, but it must be borne in mind that, in his patent specification, Lawson claimed "the steering handle is connected to the said fork by means of a bar, or the last mentioned fork is arranged at an angle so as to bring the handle within reach of the rider." The words in italics are supremely important. It was the success of the ‘Bicyclette’ which caused George Woodcock to present Lawson with a gold watch engraved "To the inventor of the Safety Bicycle." Lawson persuaded the Rudge Company to make a number of "Bicyclettes" but limited demand led to commercial failure [1].

No. 6. Harry John Lawson's first lever driven ‘safety’ bicycle, patent No. 2649/1876. Weight 65.5 lbs. For this machine Lawson registered the word ‘safety,’ which was suggested to him by his father, a minister of religion.

The patent was taken out in the joint names of James Likeman and H. J. Lawson, and it has been suggested that Likeman, whose name appears before that of Lawson in the patent specification, was the true inventor, Lawson finding the money.

It is interesting to note one of the claims in the specification:— "The rider drives the machine by hand and foot levers, either separately or in combination." This system was not original, having been used on the "Rantoone" tricycle made by Peyton and Peyton, Bordesley Works, Birmingham, in 1864.

In 1879 Lawson brought out his chain-driven ‘safety’ bicycle, Patent No. 3924, which was made by the Rudge Co, in whose employ Lawson then was. It was for the introduction of this machine that Lawson was hailed as the inventor of the rear-driven ‘safety’ bicycle, and at a dinner held at the Queen's Hotel, Coventry, on 13th July, 1895, a gold watch was presented to him with a testimonial bearing the signatures of many men well known in the trade.

The dinner and presentation were organised by Walter Phillips and the members of the Humber Cycling Club. Lawson's chain-driven machine was known as the 'bicyclette' (a word which was adopted in France and used in that country for many years to describe the rear-driven dwarf bicycle and to distinguish it from the older high 'ordinary').

This Lawson lever driven bicycle, No. 6, was purchased by H. W. Bartleet from H. Horsley, of Brighton, whose father had purchased Halliwell's business when the latter moved to Coventry; it is likely, therefore, that this identical bicycle passed through the hands of Lawson, Halliwell, and the Horsleys Senior and Junior.