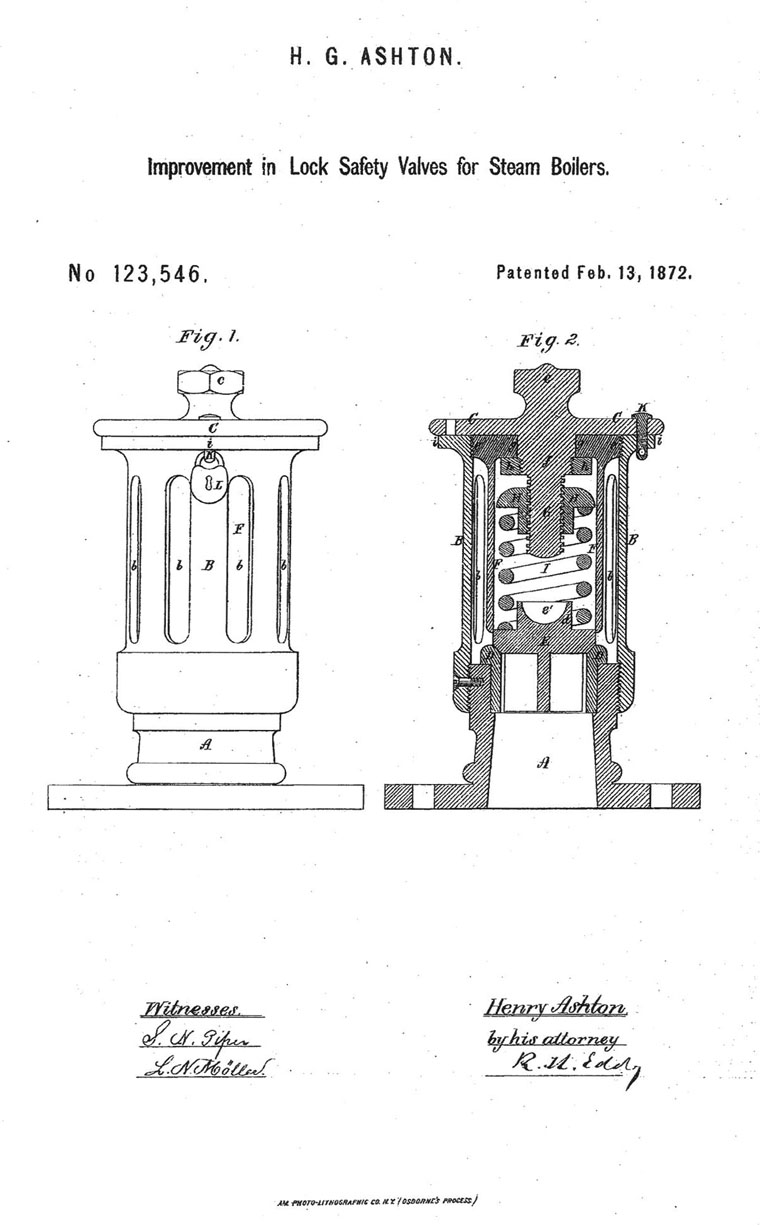 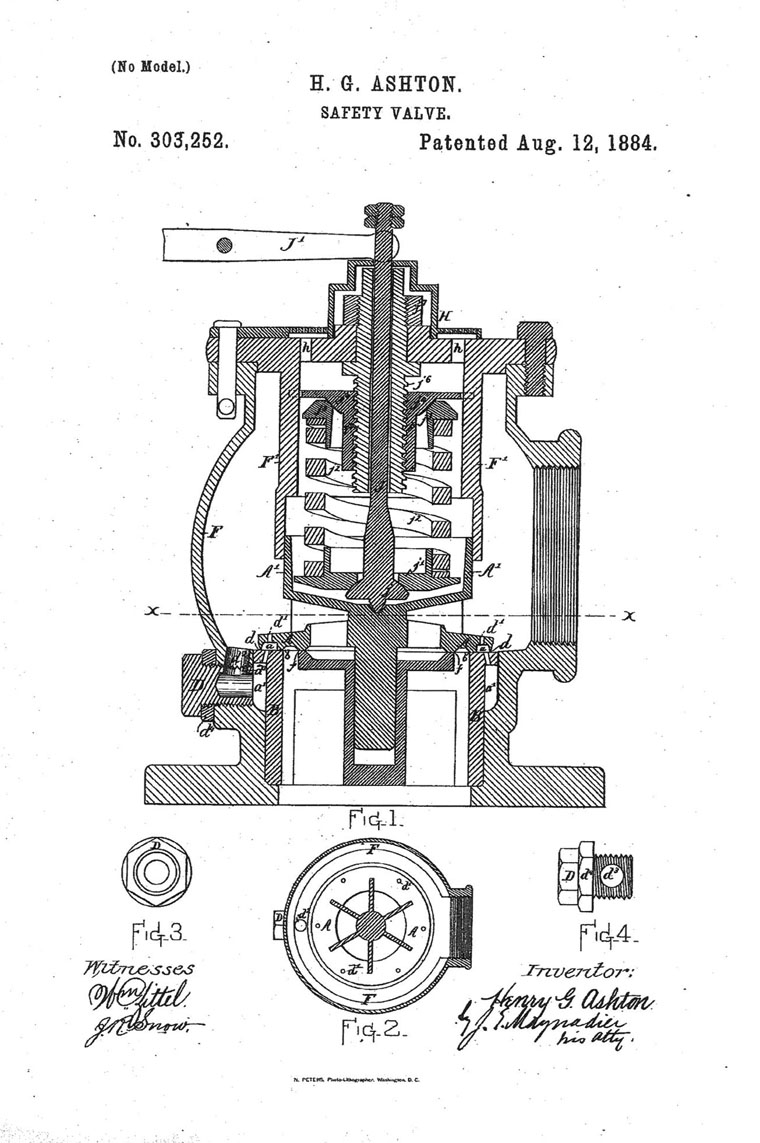 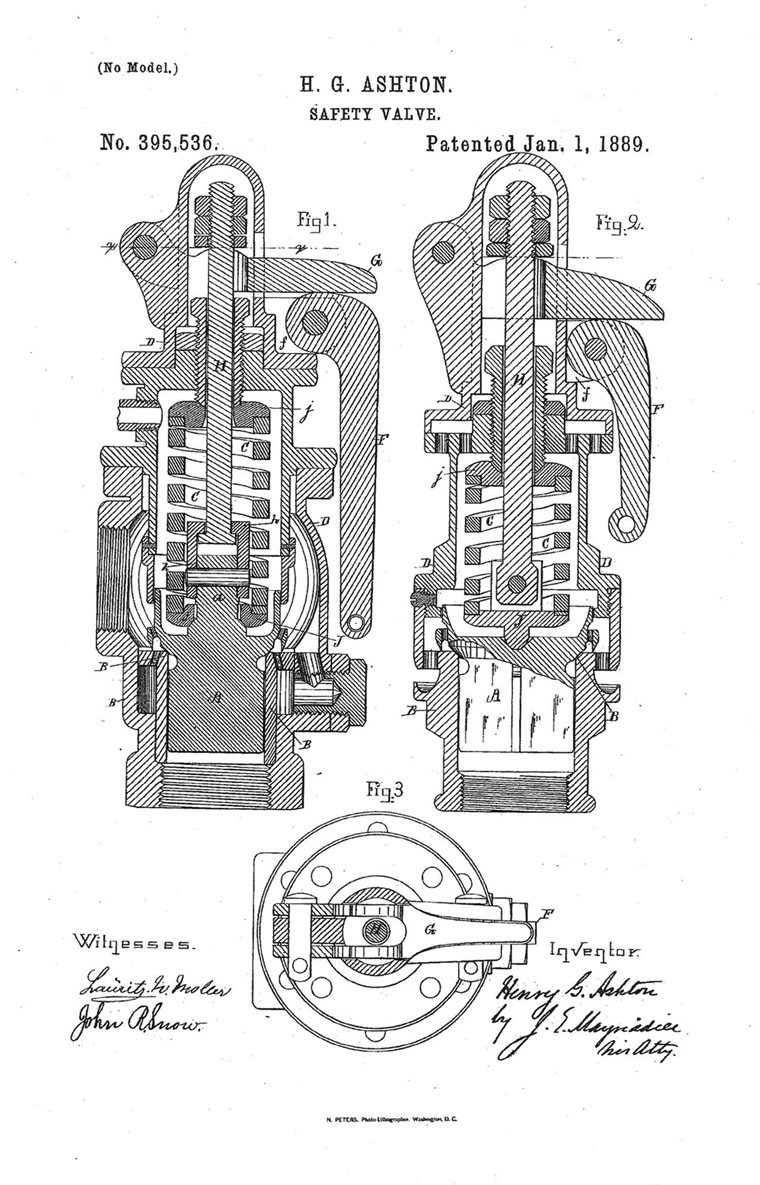 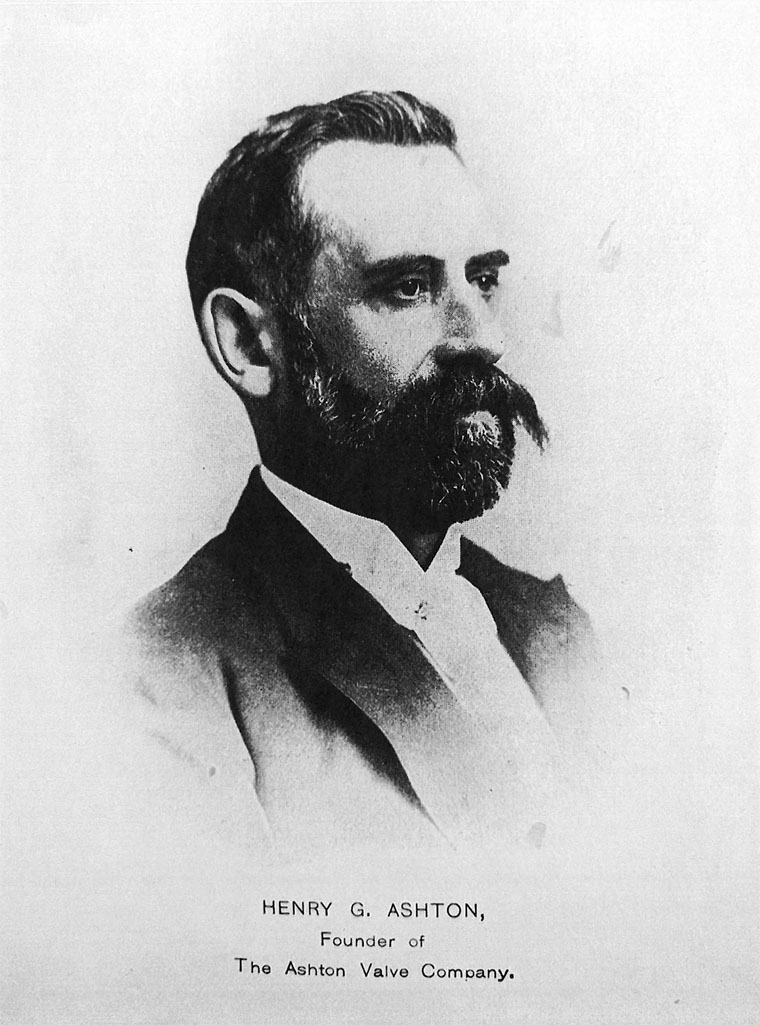 HENRY G. ASHTON was born in Norfolk, England, March 30, 1846, the son of George and Martha Ashton. His education was that of the average English schools, supplemented by a complete course in mechanical and steam engineering. He served a regular apprenticeship as a machinist and mechanical engineer. He came to Boston in 1869, finding employment with the Hinckley Locomotive Works, in 1872 he was the superintendent for refitting the Eagle Sugar Refinery at Cambridge, and the same year invented the Ashton lockup pop safety valve for steam engines. He established a shop in Boston, which was destroyed in the great fire. He fitted up another shop, and farther developed the manufacture of his valve. In 1877 the Ashton Valve Co was organised. In 1878 Mr. Ashton was again burned out in the Cathedral fire, and fitted up his present shops on Franklin street, where he continues as vice-president, and general manager of the works. Mr. Ashton has received five highest premium medals. The Ashton valve has practically a worldwide reputation, the company sending its goods to many foreign countries. Mr. Ash-con is a member of St John’s Lodge, F. A. M.; Somerville Chapter, R. A. M-; Boston Commaodery, K. T.; and is a Mason of the thirty-second degree, Sc. R. He is a member of the Central Club, and the Massachusetts Charitable Mechanics Association. Mr. Ashton married Miss Emma C. daughter of Henry and Mary E. (Simmons) Carter, of England. They came to Somerville In 1874, purchasing the estate on Bonner avenue, where they still reside. Besides spending a large amount of money in improving his own property, Mr. Ashton has caused several public improvements to be made at his expense.[1]

Henry G. Ashton[2] - HENRY G. ASHTON was born in England in 1846. He became a mechanical engineer, and was a first class practical machinist. He came to this country In 1869, and was for a time in the employ of the Hinckley Locomotive Works. We quote from an article published after his death:- "He was afterward" engaged in important mechanical work in and around Boston, and among other big pieces of work, the superintendency of which was entrusted to him, was the refitting with machinery of the Eagle Sugar Refinery at East Cambridge In 1872; That year he Invented the safety valve for steam engines, which has come into use the world over. He established a shop in Boston, and was burned out in the great fire of 1872. He immediately fitted up another shop, and further developed the manufacture of his valve. In 1877 the Ashton Valve Co was organised.

The next year the factory, then on Federal street, was again burned in what was known as the Cathedral fire. He next established works on Franklin street, where the factory is to-day located. The company controls a number of patents and many Inventions, which are nearly all the result of his Ingenuity. Their goods are sold all over this country and in foreign countries. They have received seven highest premium medals, besides being awarded the first prize at the World's Fair at Chicago, where the firm bad a large exhibit.

"He was a thirty-second degree Mason, being a member of St. John's Lodge of Boston, Somervllle R. A. Chapter, and Boston Commandery K. T. He was connected with many of the leading trade associations that brought him in contact with prominent men In his line of business. "Mr. Ashton owned considerable real estate, and had a summer home at Camp Houghton, Rangeley Lakes, where his family have spent their summers for several years, and where many of their friends have been entertained as guests." He joined our Association In 1881. He resided In Somervllle many years, where he was universally respected, and where be died on the 12th of November, aged nearly 60 years, leaving a widow, five sons and one daughter.