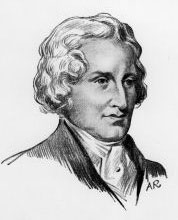 1766 February 11th. Born in Lombard Street, London, the son of Henry Fourdrinier, a wholesale stationer of Huguenot descent, and his wife Jemima White(1730-1781).

1801 Trading as a stationery business at Sherborne Lane with his brother Sealy Fourdrinier and William Bloxham when they met John Gamble who was seeking an English patent on a machine for making paper in continuous rolls, devised by Nicolas Robert and patented in France in 1799. They bought a one-third share in his patent rights.

The first machine was imported and erected at John Hall, the Fourdriniers' millwright. There, a third brother, Charles Fourdrinier, worked alongside John Gamble, Leger Didot, and Bryan Donkin (one of Hall's former apprentices), to develop it.

In June 1803, at Fort Place, Bermondsey, close to Donkin's own works, the Fourdrinier brothers erected and fitted out a factory, which they rented, and from 1811, leased, to Donkin who manufactured and sold the machines. The intention was that users would pay the Fourdriniers an annual royalty, according to the size of machine supplied.

Later they installed it in a mill at Frogmore, Hertfordshire, acquired for the purpose. Gamble remained technically and financially associated with the Fourdriniers until 1811.

The firm changed its identity several times. The original firm of Bloxham and Fourdrinier became Henry and Sealy Fourdrinier when Bloxham withdrew

1807 Extension of 1801 patent. '...Invention of Paper-Making by Machinery.......Henry Fourdrinier and Sealy Fourdrinier, of Sherborne-Lane, in the City of London, Paper-Manufacturers, and John Gamble, of St Neott's, in the County of Huntingdon, Paper Manufacturer, are now making Application to Parliament for Leave to bring in a Bill for prolonging the Term of certain Letters Patent hereinafter-mentioned, in relation to the Inventions hereinafter also mentioned...'[1]

1809 Later in the year it became Towgood, Fourdrinier, and Hunt (Matthew Towgood junior, Charles Fourdrinier, and Joseph Brooks Hunt), at which point Towgood moved to Sherbourne Lane and took over the Fourdriniers' stationery business.

The invention had cost £60,000, and caused the brothers to go bankrupt. Due to various laws, it was difficult to protect the patent on the machine, and the new system was widely adopted.

In 1814, two machines were made in Peterhof, Russia, by order of the Russian emperor on the condition £700 would be paid to Fourdrinier every year for ten years — but, despite petitioning Tsar Nicholas, no money was ever paid.

1836 Application for an extension of their patent. '...for further prolonging the term of fourteen years granted by certain letters patent, for the invention of a machine for making paper in single sheets without seam or joinings, for one to twelve feet and upwards wide, and from one to forty-five feet and upwards in length, and for certain improvements on, and additions to, the said machine; and which letters patent were assigned to Henry Fourdrinier and Sealy Fourdrinier, and the original terms thereof prolonged by an Act, passed in the forty-seventh year of the reign of His Majesty King George the Third, intituled "An Act for prolonging the term of certain letters patent assigned to Henry Fourdrinier and Sealy Fourdrinier, for the invention of making paper by means of machinery."[5]