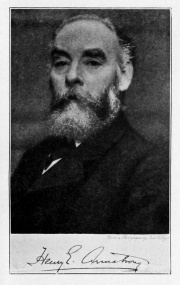 Henry Edward Armstrong was a Professor of Chemistry at the London Institution. He later worked at St Bartholomew's Hospital, the City and Guilds Institute and the Central Technical Institute.

Armstrong's life work was centred on chemistry education within engineering schools, and through it he came to be recognised as a founding father of chemical engineering. He also played an important part in establishing the SCI Process Engineering Group.

Henry Armstrong was the Society of Chemical Industry's first Messel Medallist and helped to influence and shape changing attitudes towards chemistry and contributed to the growth of chemistry's industrial application. [1]

ENGINEERS no less than chemists will learn with regret of the death of Professor H. E. Armstrong, F.R.S., which took place at his home in Granville Park, Lewisham, on Tuesday, July 13th. Professor Armstrong, who was in his ninetieth year, was an outstanding figure in British chemical science, to which he made valuable contributions, but it is as an educational reformer that he will be long remembered by those who were fortunate enough to come within his influence.

Henry Edward Armstrong was born in London in 1848, and entered the Royal College of Chemistry in 1865. He worked under Hoffmann, who was then in charge of the College, and assisted Sir Edward Frankland on methods of water analysis, afterwards studying under Kolbe.

On his return to London he worked under Matteisen at St. Bartholomew's Medical school, taking the degree classes in chemistry. In 1871 he became Professor of Chemistry at the old London Institution in Finsbury Circus, where he also did much literary work. Later he played an important part in the formation of the City and Guilds of London Institute for the Advancement of Science (Finsbury), and in 1879 he, with the late Professor Ayrton, was given charge of the teaching of chemistry and physics. In his teaching he introduced the elements of engineering, and similar principles were adopted when, in 1885, the City and Guilds Central Technical College in Exhibition-road was founded. He taught there for nearly thirty years, and remained until the college became the engineering section of the Imperial College of Technology, retiring with the title of Emeritus Professor. He received many honours and was Ph.D. of Leipzig, LL.D. of St. Andrews. and D.Sc. of Melbourne and Madrid.