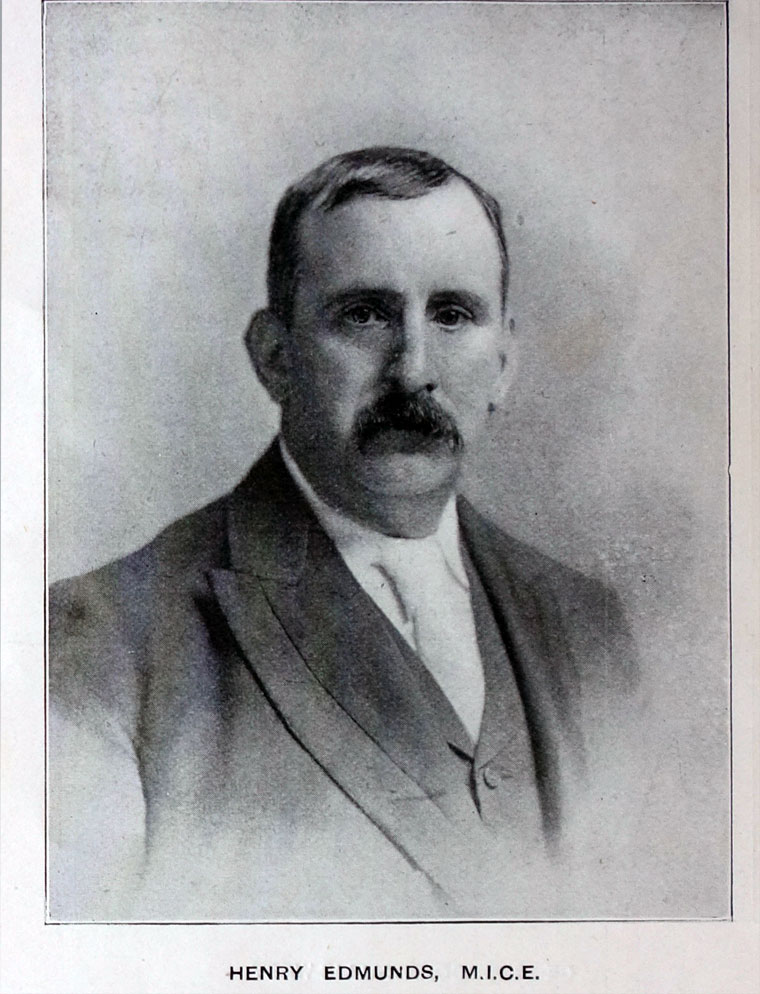 1853 March 20th. Born in Silver Street, Halifax, the son of Henry Edmunds, Ironmonger and Methodist Preacher, and his wife Caroline Hatton ( -1853). After the death of his first wife shortly after Henry was born, is father remarried Sarah Hannah Walker.

He attended private schools in York and Sowerby.

1873 Patent application with Joseph Arthur Wood and David Pitcairn Wright for 'certain improvements in lighting and heating by the combustion of hydrocarbons or other volatile fuels'.

c.1880 Said to have been responsible for introduction of electric lighting to the Navy[4]

1904 One of the early motorists; was a large shareholder in Royce Ltd, electrical engineers. Introduced to C. S. Rolls a small, 2-cylinder car that Royce had produced in his electrical establishment[6]

EDMUNDS, HENRY.- Born in 1853 at Halifax, Yorks, Mr. Henry Edmunds has been identified with electrical engineering since 1877. His motoring experiences date from 1897, when his first horseless vehicle was a De Dion tricycle with trailer. This was followed by a De Dion quadricycle, and in 1899 by a phaeton car of Faugere Ochin & Dangleterre. Naturally, as an electric engineer, cars driven by electricity soon claimed Mr. Edmunds' attention, and his first experiences in this direction were with a Krieger car. Amongst other cars he owned a 7 h.p. and 10 h.p. Daimler, running on the latter over 40,000 miles. His next car is to be a 22 h.p. Daimler. Mr. Edmunds has been a member of the Club for some years, and acted for a year as Chairman of the Touring Section. But possibly he may be best remembered by members and readers of this JOURNAL on account of the Hill-climbing Trophy, bearing his name, which he presented last year to the Club. It is a work of art from the well-known Vienna sculptor Gustav Gurschner, and, according to present intentions, is to be raced for the first time in Ireland, in connection with the events immediately following the coming Gordon Bennett Race.

Mr. Henry Edmunds, who died on Tuesday, November 22, at the age of 74, was one of the pioneers of electric lighting, having been closely connected with Werdermann in the development of the Jablochoff arc lamp, and having himself introduced that form of lighting into the United States. During his visit to the latter country, he also interested himself in the Farmer-Wallace arc lamp and dynamo, and in turn introduced this equipment into the British Isles. At the same time he made the acquaintance of Mr. Edison, and on his return, brought with him one of that inventor’s early phonographs, while he himself devised the “ phonoscope,” an instrument for showing the vibrations of sound in rays of light, and an apparatus called the aquaphone for signalling under water.

His close relations with American engineers led him to play a leading part in the formation of the Anglo-American Electric Light Company, of which he became the first engineer. In this capacity he undertook the lighting of the South Kensington Museum and a number of factories, but shortly afterwards resigned, and became associated with Mr. (afterwards Sir Joseph) Swan, in the development of the vacuum lamp. At an early demonstration of this lamp in London, one of those present was Capt. J. A. Fisher (afterwards Lord Fisher of Kilverstone), who immediately became interested in its possibilities. At his request, Mr. Edmunds visited Portsmouth and demonstrated that if a lamp was broken over a tray of guncotton the latter would not ignite. This led to the introduction of electric lighting into the British Navy, the first ship to be thus equipped being H.M.S. Inflexible. He was earlier responsible for installing electric lighting on the City of Richmond, this being probably the first ship in the world to be fitted with this system. He also took the Swan incandescent lamp to the Paris Exhibition of 1881 and installed electric lighting in the Opera House in that city.

Perhaps, however, the most important, if less spectacular, portion of Air. Edmunds’ life began in 1885, when he entered into partnership with Mr. W. T. Glover to form the well-known firm of cable manufacturers of W. T. Glover and Company. On Mr. Glover’s death, in 1893, Mr. Edmunds became the sole proprietor for a time, but he was soon joined by Mr. G. B. Samuelson, while later the business was formed into a company, of which he acted as managing director. Air. Edmunds was one of the first who took an interest in motoring, and as early as 1898, he brought a De Dion motor tricycle and trailer from Paris.

At an early age he entered the business in which his father was a partner (Edmunds and Hookway, engineers and iron merchants), and as a youth he studied scientific books.

His first introduction to electrical matters arose when Mr. Louis John Crossley (a partner in the carpet manufacturing firm and M.P. for Halifax) came to the warehouse to ask for some zinc plates for a battery. Henry Edmunds asked if he would have them plain or amalgamated; this led Mr. Crossley to take an interest in the young man, and to his giving him a ticket to see the first demonstration of electric light ever given in England, by Jablochkoff in May 1877. There he met Richard Werdermann, at whose instance he went to America to develop the Werdermann system of arc lighting.

Nothing, however, came of it, but whilst there he met Mr. William Wallace, who also was an electrical inventor, with the result that he brought to England in December 1887, when he was 24 years of age, the first Farmer Wallace dynamo and arc lamps, which were installed in Liverpool Street railway station in 1878, being the first example in England of public lighting by direct-current arc lamps in series.

On this same visit to America he met Edison in his small laboratory at Menlo Park, and there heard the first reproduction of articulate speech by the tinfoil phonograph, the pioneer of the modern gramophone.

In 1880 he became a partner with Sir Joseph Swan for the exploitation out of England of the Swan lamp, and he had a commission of 5s. on each lamp sold, the price then being 25s.

He took part in the formation of the Anglo-American Electric Light Co., which subsequently became the Brush Arc Light Co. which is still in existence as the Brush Electrical Engineering Co.

In 1881 he received the order to fit H.M.S. "Inflexible" with electric light, the first warship so fitted, and in the same year he fitted the "City of Richmond," the first Atlantic liner lighted electrically.

It is necessary to jump much of Henry Edmunds's electrical pioneer work and to come to 1886 when he joined Mr. Walter Glover in partnership, the foundation of the firm of W. T. Glover and Co., Ltd., as it is now. Mr. Glover died in 1893 and Mr. Edmunds became the sole partner, being afterwards joined by Mr. Godfrey Samuelson, and a few years later the business was turned into a limited company.

This business began by utilizing machinery which had been made for braiding the steel hoops of crinolines, for braiding copper wire with cotton, and subsequently wires insulated with pure rubber strip and later vulcanized rubber wires, paper-covered cables, etc., were made.

Mr. Edmunds was the means of founding the Cable Makers' Association in 1899 and was one of the first chairmen of the Council.

Meantime Mr. Edmunds, who in 1877 had been an ardent cyclist, purchased in Paris in 1898 a De Dion motor tricycle, one of the first seen in England; in 1899 he had a Coventry-built Daimler motor-car of 4 h.p., and the Automobile Club of which he was one of the founders holding a 100-mile trial, this car took part in it. In 1901 he had a 10-h.p. Daimler car.

It was about 1902 or 1903 that he became acquainted with Parsons, the inventor of the non-skid chain, which he commercially introduced throughout the world.

It was Mr. Edmunds who introduced Mr. Rolls to Mr. Royce, thus founding the world-famous firm.

In 1902-3 he was interested in introducing into England the process which had been developed in America of burning Portland cement in rotatory kilns, the now almost universal practice.

Perhaps the last innovation which he undertook to pioneer commercially was an invention of his son for photography in three dimensions, as it were, which enabled a cameo to be cut by a machine. It was a remarkably clever process but there was an insufficient demand and the process was not a commercial success.

Mr. Edmunds was twice married; his first wife died about a year after their marriage, his second, who was Miss Howard, an American lady, only surviving him for a few months. He leaves a daughter and two sons.

He joined the Institution as an Associate in 1878 and was elected a Member in 1881.

A comrehensive, 333-page account of the life and work of Henry Edmunds was written by Paul Tritton and published by the Rolls-Royce Heritage Trust[10]