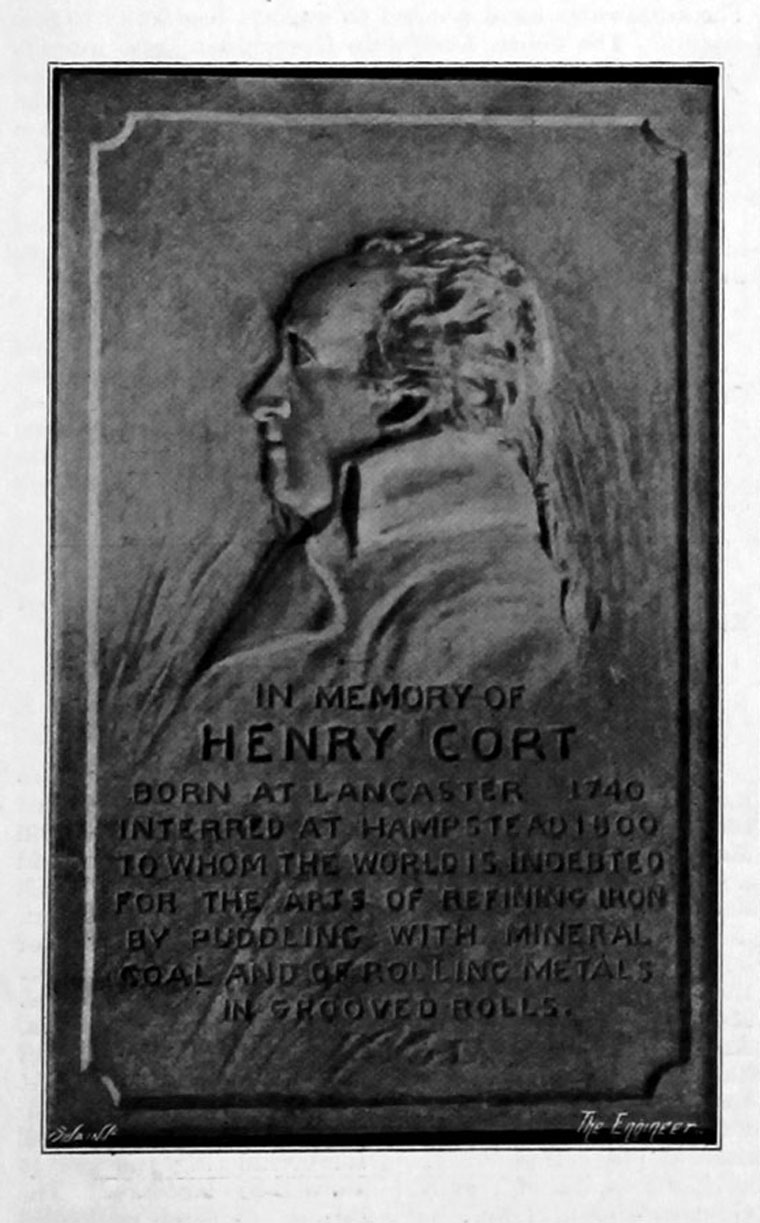 In 1782 he patented the puddling process for refining iron ore.

The son of a builder, Cort was born in Lancaster in 1740. As a young man, he worked as a Royal Navy agent in London, where his interest in the poor quality of English iron against overseas supplies developed, leading to his inventions that greatly increased the quality of iron production.

1768 Marriage to Elizabeth Heysham h connected him to the Attwick family of Gosport, and to Elizabeth's uncle, William Attwick. Cort joined Attwick in the family iron business, living and working in Gosport.

1779 With an increase in demand for iron goods from the Royal Navy, the iron working enterprise in Middle Street, Gosport flourished, but was severely strained by a contract for barrel hoops. To cope with an unexpectedly high demand, and by the high cost of Swedish iron, Cort set up an iron works in Fontley, Hampshire. This was a rolling mill, and here he developed his ideas

1784 Patent for his balling or puddling furnace, allowing the manufacture of crude, standardized shapes. His work built on the existing ideas of the Cranege brothers and their reverberatory furnace (where the heat is applied from above, rather than forced air from below) and Peter Onions' puddling process where the iron is stirred to separate out impurities and extract the higher quality wrought iron. The "puddler" extracts a mass of iron from the furnace using a rabbling bar. The extracted ball of metal is then processed into a shingle by a shingling hammer, after which it is rolled in a rolling mill.

His partnership in the Fontley Mill was with Samuel Jellicoe (son of Adam Jellicoe, who had important Navy connections, and great-grand father of the hero of Jutland Admiral Jellicoe (1859-1935)). The partnership eventually turned out very badly, but initially the elder Jellicoe financed Cort's experimentation with large sums and a wharf at Gosport was purchased.

On Adam Jellicoe's death (1789), he was in debt himself, and Cort's debts (guaranteed by his patents) to Jellicoe were called in to settle the estate. Because of the nature of the business, which was now vital to the supply of iron to the Navy, the patents were taken over by the Government. The younger Jellicoe was given sole control of the mill and wharf. Royalties on the patents were not recovered (which might have cleared Cort's debts) and so Cort's impoverishment was settled.

He married twice. A short-lived marriage to Elizabeth Brown was succeeded by his marriage in 1768 to Elizabeth Heysham, with whom he had a large family. However, his business ventures did not bring him wealth, even though vast numbers of the furnaces that he developed were eventually used (reportedly 8,200 by 1820). He was awarded a government pension after leaving his firm, but died a ruined man, and was buried in Hampstead Churchyard.